As early as 1965, planning for the 100-metre radio telescope had begun. Once funding for the building projects from the Volkswagen foundation was guaranteed, the Max Planck Society founded the Max Planck Institute for Radio Astronomy in 1967. 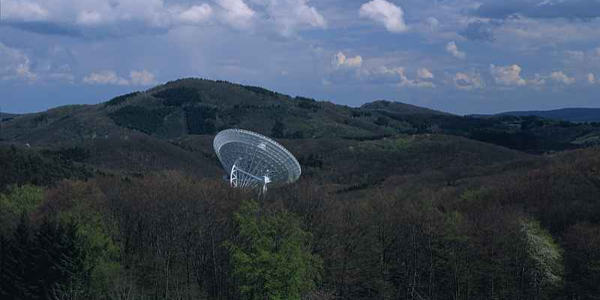 First designs for the 100-metre radio telescope were presented by the companies Krupp and MAN, and eventually Krupp was awarded the contract. The actual building work was then carried out by the consortium “Arbeitsgemeinschaft Stahlbau-Radioteleskop”, or ARGE STAR (consortium steel construction radio telescope), which was founded especially for this purpose.

On the lookout for an appropriate location

The search for an appropriate location began several years before the construction work. There were several important points to consider:

It was also hoped that the location would make it possible to avoid radiation from radar transmitters, but this proved impossible. Therefore, it was decided to position the telescope in a valley where the surrounding landscape would guarantee the utmost protection from earthly signals. The valley needed to be running from North to South so that celestial objects like the centre of the Milky Way could still be observed.

Start of construction in February 1968

The telescope is situated in a valley oriented in the North–South direction. Two creeks had to be relocated before building work was begun. In February 1968, when the site had been prepared, the foundation was laid. 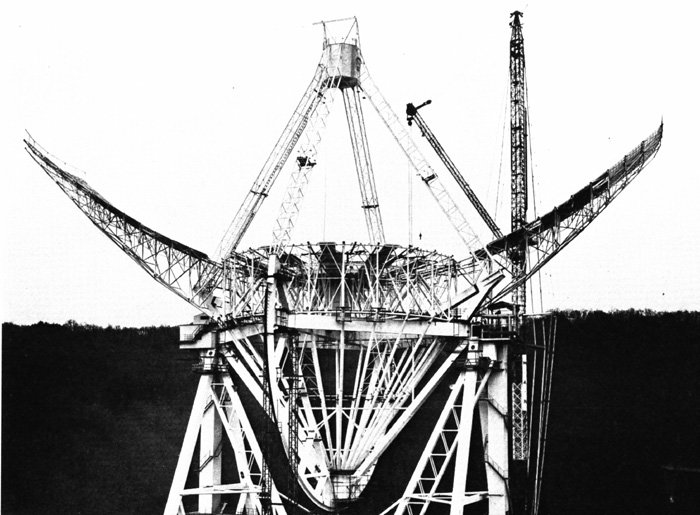 The valley’s soil consists of greywacke, which is an old metamorphised sedimentary stone. This stone is solid, yet craggy. Therefore, the first measure step was to harden the soil by adding concrete. For stability reasons, the foundations had to be strongly connected to the bedrock. The base ring which carries the weight of the telescope rests on 154 concrete pillars which are between 7 and 11 metres long. 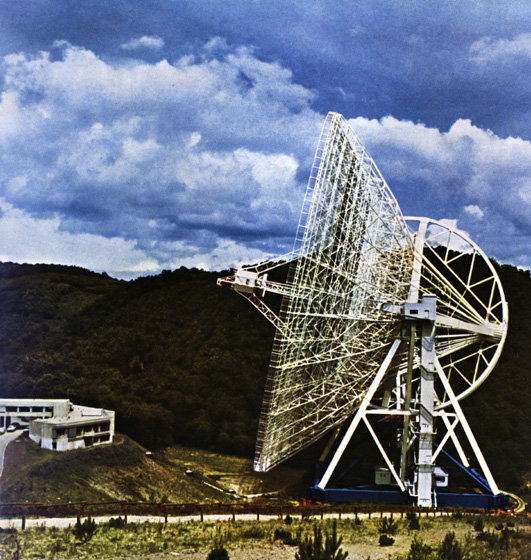 The building of the steel construction began in October 1968. The twelve parts of the primary mirror dish were built and assembled on a flattened assembly field, right next to the telescope. In December 1969, the first of the twelve parts was lifted up and positioned. April 1970 saw the lifting up of the twelfth part and thus the completion of the steel skeleton, the framework of the telescope. On August 1st, 1972, the Max Planck Institute for Radio Astronomy celebrated the launch into operation of the 100-metre radio telescope in Effelsberg.