Radio Telescope Effelsberg
With a diameter of 100 meters, the Radio Telescope Effelsberg is one of the largest fully steerable radio telescopes on earth. Since operations started in 1972, the technology has been continually improved (i.e. new surface for the antenna-dish, better reception of high-quality data, extremely low noise electronics) making it one of the most advanced modern telescopes worldwide.

The History of the MPIfR

The institute was founded in 1966 by the Max-Planck-Gesellschaft as the “Max-Planck-Institut für Radioastronomie” (MPIfR).

The foundation of the institute was closely linked to plans in the German astronomical community to construct a competitive large radio telescope in (then) West Germany. In 1964, Professors Friedrich Becker, Wolfgang Priester and Otto Hachenberg of the Astronomische Institute der Universität Bonn submitted a proposal to the Stiftung Volkswagenwerk for the construction of a large fully steerable radio telescope.

In the same year the Stiftung Volkswagenwerk approved the funding of the telescope project but with the condition that an organization should be found, which would guarantee the operations. It was clear that the operation of such a large instrument was well beyond the possibilities of a single university institute.

Already in 1965 the Max-Planck-Gesellschaft (MPG) decided in principle to found the Max-Planck-Institut für Radioastronomie. Eventually, after a series of discussions, the institute was officially founded in 1966. An important role in this played a “transitioning agreement” between the Prime Minister of the Federal State Nordrhein-Westfalen (NRW) and the President of the MPG. This agreement regulated the location of the institute in Bonn (NRW). It also determined the inclusion of the Research Institute for Radio Astronomy of the Bonn University into the new institute.

Professor Otto Hachenberg received the appointment by the MPG to be the Founding Director. The new MPIfR started official operations on 1st September 1966. A consortium “Radioteleskop ARGE“, consisting of the firms Krupp and MAN, was awarded the contract to build a fully steerable radio telescope of 100m diameter. The final decision on the site of the instrument fell for a valley near Bad Münstereifel-Effelsberg, some 40km from the MPIfR in Bonn. The 100m radio telescope was officially inaugurated on 12th May 1971, starting full astronomical observations on 1st August 1972.

By 1969 the institute was led by a board of three directors: Otto Hachenberg, Peter G. Mezger and Richard Wielebinski. In 1977 after the retirement of Otto Hachenberg who remain as Professor for Radio Astronomy at Bonn University Kenneth I. Kellermann joined the board of directors for two years. At the end of 1979 Kellermann returned to his position at the National Radio Astronomy Observatory in the USA as already planned before. In 1989 Gerd Weigelt joined the board of directors adding another research direction, the infrared interferometry.

Richard Wielebinski retired on 29th February 2004 after a 35-year period of being a Director at the institute.

In autumn 2008 Michael Kramer was appointed scientific member of the MPG and director at the Institute. He started his new duties in March 2009.

The institute, in 1966 initially located in the old Bonn Observatory moved in 1974 to a newly erected building in Bonn-Endenich. The new institute building is on the same site as the newly constructed Bonn University Argelander Institut für Astronomie . 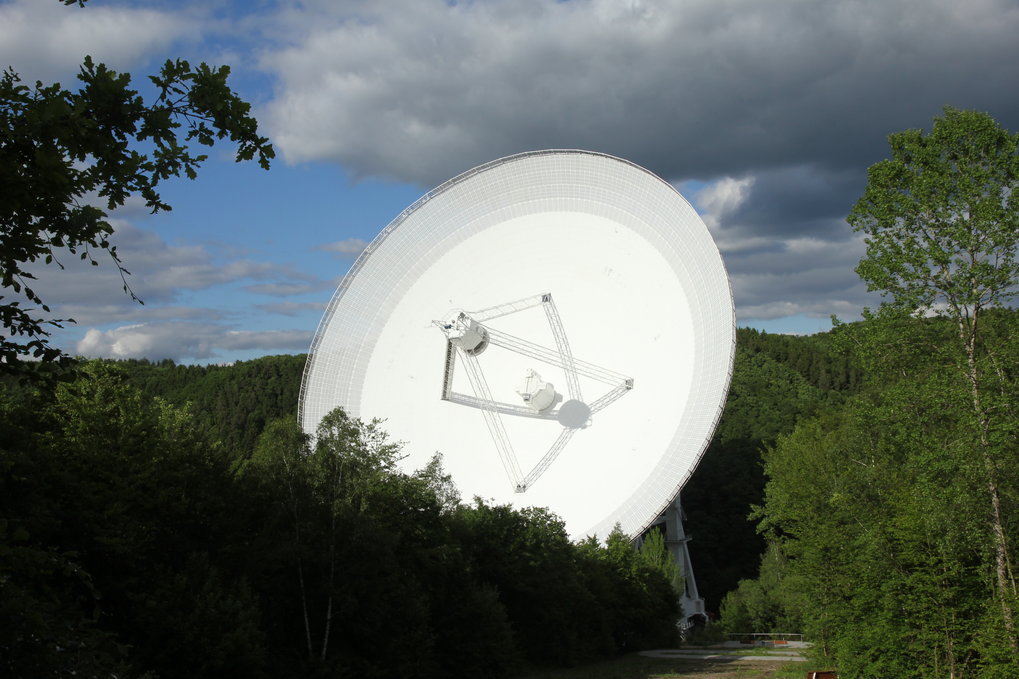 The completion of the 100-m radio telescope in 1972 led to an active era of research with this instrument by the institute’s scientific staff and external scientists that continues until today.

With the excellent regular observational capabilities interest was awaken to extend the range of research activities. The 100m radio telescope joined in the observations with the Very Long Baseline mode. The institute became a founding member of the European VLBI Network (EVN). The 100m telescope remains until today an important member in international VLBI networks. This includes research with the ambitious Space VLBI telescopes VSOP (Japan) and RadioAstron (Russia) that enable observations with extreme angular resolution. Nowadays it also contributes heavily to the efforts of the European Pulsar Timing Array (EPTA) and the Large European Array for Pulsars (LEAP).

In 1977 the Stiftung Volkswagenwerk approved to fund a proposal of the institute to construct a radio telescope for mm-wavelengths. This led to the construction of a 30m diameter dish on Pico Veleta at an altitude of 2850m in the Sierra Nevada above Granada. This telescope was transferred to a joint “Institute for Radio Astronomy at Mm-wavelengths” founded by MPG and CNRS (Centre National de la Research Scientifique) with its headquarters in Grenoble. 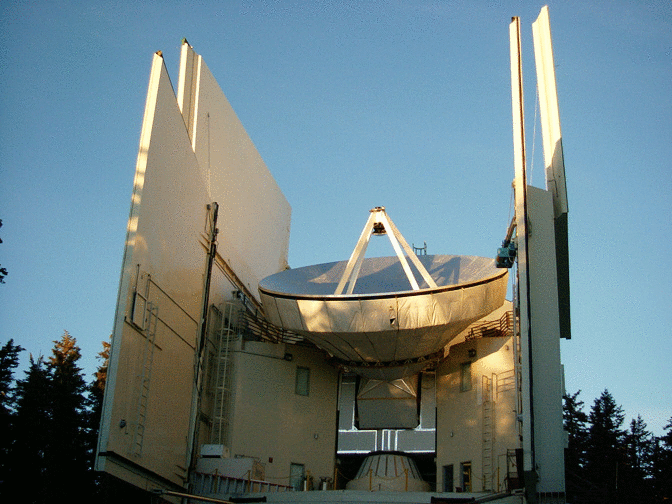 The next step to cover the shortest wavelengths range was the approval in 1981 by the Alfried Krupp von Bohlen und Halbach-Stiftung to finance a 10m dish for sub-mm wavelengths. This new sub-mm radio telescope was to be constructed on a 3200m elevation Mt. Graham in Arizona. A partnership agreement with the Steward Observatory of the University of Arizona was signed. This telescope was dedicated under the name Heinrich-Hertz-Telescope (HHT). But its operations were severely delayed by ecology and cultural issues. Only in 1993 operation of this instrument became possible. 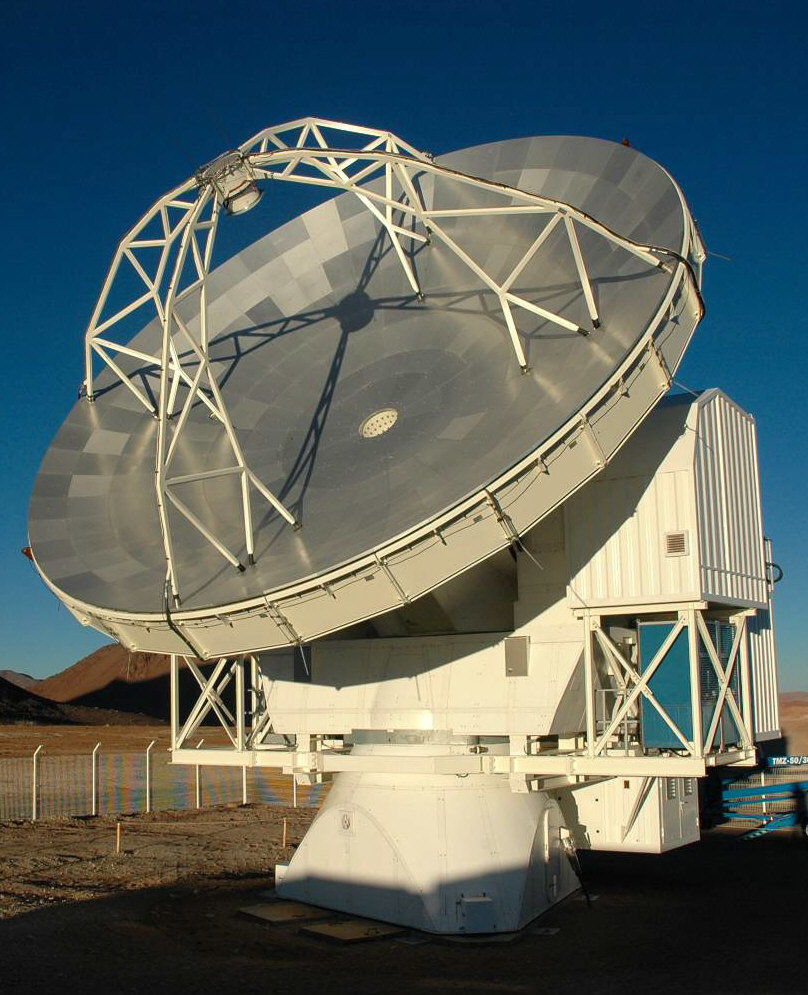 The participation in the HHT project in Arizona was concluded on 30th June 2004. At this stage, driven by the world project ALMA, the designs of 12m sub-mm telescopes was well advanced. Also the decision to open up the 5000m high site for astronomy in the Atacama Desert in Chile was approved. A 12m radio telescope named Atacama Pathfinder Experiment (APEX) was funded by the MPG and became operational jointly with the European Southern Observatory (ESO) and the Swedish OSO. This instrument was operational in 2005 already and is expected to be operated well beyond 2017.

In addition to Earth-bound astronomy the MPIfR became active in observations at even shorter wavelengths by engagement in the development of instruments for such satellite projects as ISO, FIRST, HERSCHEL and the Airplane observatory SOFIA. The development of the instrument “GREAT” led to THz spectroscopy observations with SOFIA in 2014.

The most recent development in capabilities in Effelsberg was the addition of a LOFAR station. This low frequency project is a European venture, managed in the Netherlands, adding new capabilities to the observatory in the 30-80 MHz and 120-300 MHz bands. This project is a pathfinder for a Square Kilometre Array (SKA) that will be the next “World Telescope” and is currently in advanced stages of design with the participation of the institute.