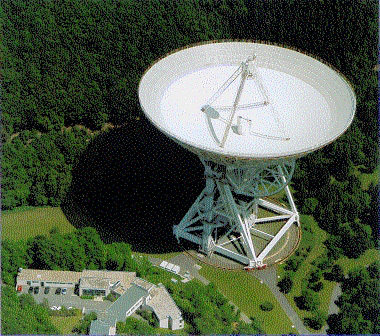 The 100-metre radio telescope in Effelsberg is used by members of the Institute, as well as a large number of guest scientists from all over the world. The aerial photograph on the left shows the radio telescope with its mirror surface (the outer part of which was renewed in 1998). The control centre on the mountainside can be seen on the lower left. It hosts the control room, the measuring and computing rooms, electronic laboratories and workshops as well as to guest rooms for the scientists on site.

How does the parabolic reflector work? 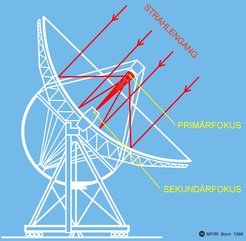 The receivers used at the primary focus point detect frequencies between 800 MHz and 86 GHz. Switching between different receivers is done manually until the upgrade to be made in 2006. A focal length of 385 metres at the secondary focus point makes it possible for several receivers between 2.7 and 43 GHz to be used at the same time, and these receivers are ready for operation at any time. Even at larger distances from the optical axis geometrical errors are kept relatively small.