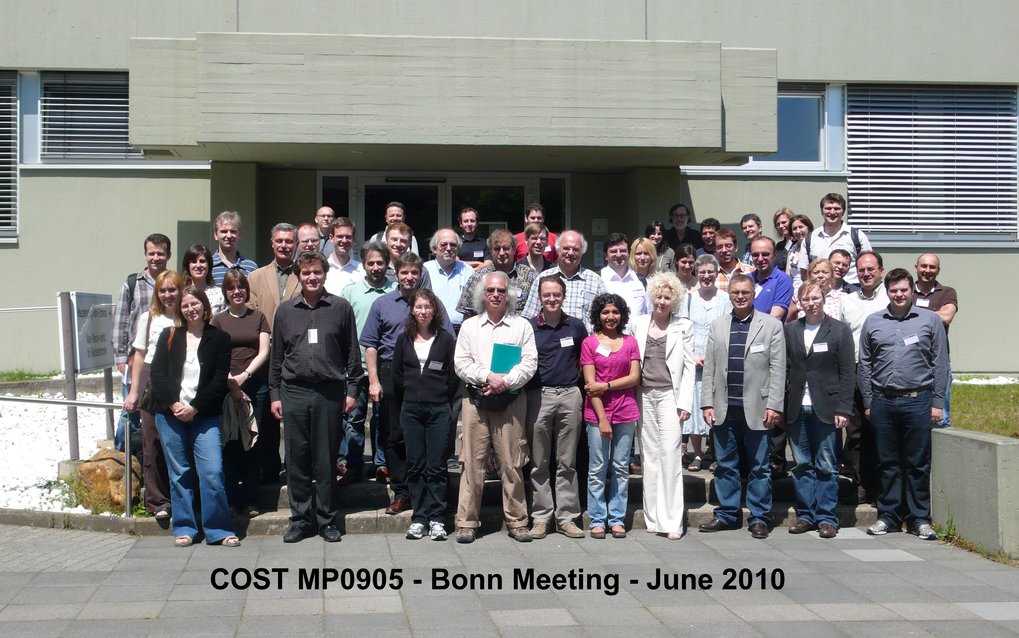 due to several meetings taking place at the same time, many colleagues who would like to participate in our Working Group2 at the COST meeting in Bonn in June can not attend! We thus decided to shift the first working group meeting for WG2: Stellar Black Holes / Pulsars to the next meeting in Valencia (Nov. 15-16, 2010)!

I am sorry for this! You have registered for the Bonn meeting in June and you are welcome to participate in either WG1, WG3 or WG4. Please let me know whether you prefer to participate in one of these WGs! Many thanks in advance and best regards

This first Working Groups (WG) meeting shall provide all participants with the opportunity to get to know Black Hole experts from all aspects of this research field, to discuss ideas and "burning" scientific questions and develop new strategies/projects to tackle them.

Below please find texts from the Working Group leaders introducing their WGs.

The aim of this working group is to gather leading experts in the field of quantum gravity both of the theoretical and experimental physics side.

Stellar-mass black holes are the remnant core of massive stars formed after supernovae explosions or gamma-ray bursts. They are believed to represent the end stages of stellar evolution in the most extreme gravitational environments within galaxies. Furthermore, it has been observed that for some binary systems, the companion star can survive the formation of the black hole; hence it is possible to directly study the fundamental physics of black holes via their influences in binary systems. The aim of this working group is to study the effects of stellar-mass black holes on their surrounding environments. There are two key mechanisms that we will address: accretion onto a black hole from a companion star, and the timing of pulsars present in the extreme gravitational conditions in the vicinity of a black hole companion.

X-ray binaries (XRBs) have been found to be a source of high-energy Galactic astrophysics that have been well study only since the recent development of X-ray satellites. Due to their location within the Galactic plane they are highly extinct in the optical bands; however, infrared spectroscopy have now confirmed these sources of very high-energy X-rays contain compact objects such as white dwarfs, neutrons stars and black holes. It has also been discovered that the black hole XRBs are also a relative strong source of radio emission and resolved jets have been imaged using radio interferometers. Due to these morphological similarities with extragalactic quasars they have therefore been nicknamed microquasars. XRBs are unique laboratories to study these processes as their dynamic time-scales are many orders of magnitude shorter than extragalactic sources. Quasi-periodic oscillations (QPO) can study changes in the accretion disk, correlations between in the inflowing matter and outflowing jets can be monitored over multiple cycles of outbursts and superluminal radio knots have been observed after X-ray spectral state changes. However, in-order to better understand these phenomenological processes, coordinating simultaneous multi-wavelength monitoring campaigns remains one of the most difficult observational challenges.

2) Pulsar timing in the orbits of black holes 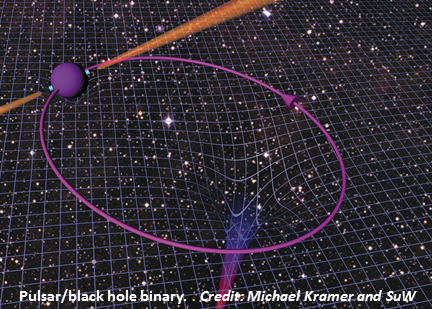 Pulsar observations provide a very unique opportunity to study black hole properties and physics, as well as to test gravitational theory and investigate several astrophysical processes in which black holes play a major part. The eventual discovery of a pulsar in a binary system  with a black hole companion will be more than simply an observational milestone — it will present the possibility of directly probing and testing the properties of the black hole as predicted by general relativity, such as the No-Hair theorem, and the Cosmic Censorship Conjecture. The discovery of such a system, although predicted to exist, has thus far not been made; however, the Square Kilometer Array is predicted to uncover a pulsar-black hole binary system once it is operational.

3) Interactions with other working groups

The above topics hold the potential for significant overlap with those in this and other working groups. In particular, microquasars can be scaled up to super-massive black holes with larger dynamic time-scales.The observations and precise timing of a collection of millisecond and binary pulsar systems distributed throughout the sky can be used as very long arms of a gravitational wave detector. Such a "pulsar timing array" can be used to directly detect the existence of a stochastic gravitational wave background, due primarily to the merger of massive black hole binaries in high-redshift galaxies. There is currently an ongoing effort by pulsar astronomy communities around the world to achieve this goal. Future instruments will enable the use of this pulsar timing array to proceed a step further and study the gravitational wave sources themselves, thus giving valuable insight into galaxy evolution. Pulsar observations thus can potentially be used to study the merger of super-massive black holes.

A standard paradigm in modern astrophysics is that every galaxy with a nuclear bulge harbors a super-massive black hole (SMBH). Furthermore, observations in the past decade have revealed the existence of so-called nuclear star clusters (NSCs) of 105 to 107 solar masses that surround the SMBHs at the dynamical centers of spiral galaxies. The Galactic center (GC) plays a fundamental role in this research because it is ~100 times closer than the next comparable Galactic nucleus (Andromeda Galaxy) and ~1000 times closer than the next active nucleus. This allows us to study the physical processes around an SMBH at an extremely high spatial resolution that is not achievable in any other system. Observations of stellar dynamics in the GC combined with radio-interferometric observations have not only provided the currently best evidence for the existence of SMBHs but have also made it possible to measure the mass of the Galaxy's central black hole, Sagittarius A*, with high precision. 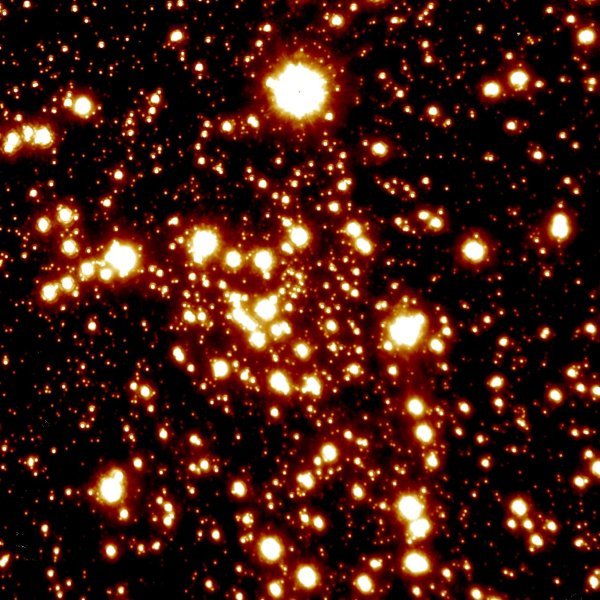 Current GC research topics are closely interrelated.
For example:
Stellar dynamics probe both the mass of Sagittarius A* and of the nuclear star cluster itself. Activity of Sagittarius A* can - and must - be observed simultaneously at X-ray, radio, mm, and near-infrared wavelengths. In order to understand gas dynamics and search for a postulated outflow from Sagittarius A*, one needs to combine near-infrared and radio observations as well as have a profound knowledge of the stellar and gas dynamics within a few pc of the SMBH. The Galactic Center is thus a laboratory for fundamental astrophysics of galactic nuclei. 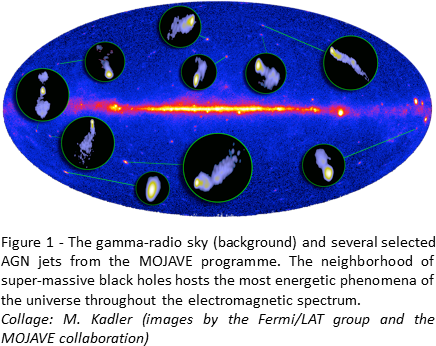 Super massive black holes (SMBH) are believed to lurk at the centre of active galactic nuclei (AGN), which are present in at least 10% of all galaxies in the Universe. Those AGN reveal themselves by an enormous output of energy (from radio to gamma-rays or even TeV, see Figure 1 for a recent example). While non-active galaxies principally emit thermal radiation based on stellar processes, the main radiation of active galaxies is of non-thermal origin. The radiation from the AGN is most likely caused by accretion of mass onto the SMBH. In this process, part of the gravitational energy is converted into heat and electromagnetic radiation and can be detected across the electromagnetic spectrum. The accretion disk and the BH act to form narrow beams of energetic particles and magnetic fields in opposite directions perpendicularly from the disk and away of the BH-disk complex (see Figure 2). These jets emerge at nearly the speed of light and some may extend over millions of light-years, like in the case of FRII jets. They radiate over the entire electromagnetic spectrum with brightness variability on a wide range of time. 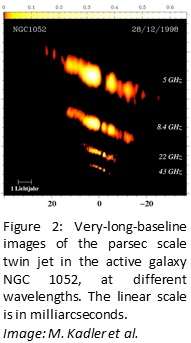 Detailed studies of jets have so far only been possible in the radio and optical regimes. A combination of observations at all wavelengths, but especially in the radio frequency and at high energies, is necessary to develop a full understanding of the nature of jets. The study of gravitational waves can also help to understand the merging of binary SMBHs. Complementarily, numerical simulations of those magnetized, relativistic plasma streams help to understand the underlying physics and even link their properties to those of the central regions of the active galaxy, in the vicinity of the SMBH.

The Working Group No 4 will develop new strategies and joint forces to study these objects, including observations throughout the spectrum and numerical simulations. We will focus on three main areas: i) SMBH feeding from the accretion disk and its relationship with the observed jets; ii) merging galaxies and SMBH binaries; and iii) evolution and feedback in clusters of galaxies. Possible deliverables such as a concept for newer observations and the need for new instruments, a book summarizing the present state of knowledge in this topic, etc., will be discussed in the group.