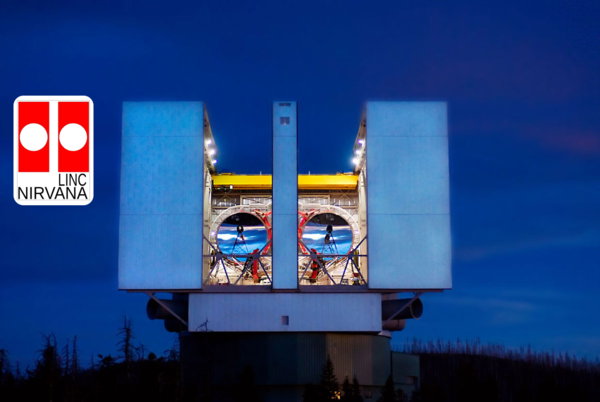 LINC-NIRVANA (LBT INterferometric Camera -Near-IR / Visible Adaptive INterferometer for Astronomy) is built for one of the most exciting new astronomical telescopes, the Large Binocular Telescope (LBT) on Mt. Graham in Arizona, USA. With its two 8.4 m primary mirrors, the design makes possible near-infrared (1 - 2.4 µm) interferometric observations with a maximum baseline of 23 m.

LINC-NIRVANA is a beam combiner instrument in so-called “Fizeau” mode, which can deliver true diffraction-limited images in the near-infrared and can preserve phase information within a large field-of-view of 10” x 10”. At J-band wavelengths (1.1 µm), the diffraction-limited resolution of 10 mas can be achieved.

Our division is responsible for the near-infrared detector of the fringe and flexure tracking system. The detector has to record LBT interferograms of suitable reference stars in the field of view of 90 x 60 arcsec around the object at a frame rate of the order of up to 1000 frames per second using, for example, 32 x 32-pixel subframes. The fringe-tracker interferograms are required for monitoring and closed-loop correction of the atmospheric optical path difference of the two LBT wavefronts. A beam splitter followed by an optical periscope in front of the imaging sensor produces a defocused image of the two LBT beams in a second branch. The absolute position of the two beam centroids is used for telescope flexure compensation. For technical and financial reasons the two tasks of fringe and flexure tracking are managed by one imaging sensor and one readout electronics in parallel instead of using two complete systems each.

Serious effort was made to independently readout two quadrants of a HAWAII-1 imaging sensor. One quadrant is used for fringe tracking at high frame rates, another quadrant is used for flexure tracking at low frame rates. The two quadrants are read in a time multiplexed way. Two lines of the flexure tracker quadrant are followed by one read of the fringe tracker quadrant. Therefore, the time needed to read the flexure quadrant only marginally lowers the fringe tracker frame rate. For example in one of the diefferent LINC-NIRVANA readout modes it takes 32 fringe frames to read one complete flexure frame.

Fringe quadrant readout:
The fringe frames are sampled continuously. Within one frame, line n is reset. In the next frame, line n+1 is reset and so on. This is the “rolling reset mode”, which provides an uninterrupted stream of frames without the need of a dedicated reset run, which in contrast, would deliver a missing frame to the fringe tracker control loop. This approach doubles the frame rate compared to simple correlated double sampling (CDS). The reset of line n actually is a read-reset-read to avoid the information loss of line n. The complex reset strategy offers a continuous sequence of frames to feed the control loop without jitter and stable thermal operation of the detector due to the absence of a separate reset run.

The flexure frames are sampled up the ramp. A defined number of nondestructive reads is followed by a destructive one.

For a detailed description of our readout electronics, read more... 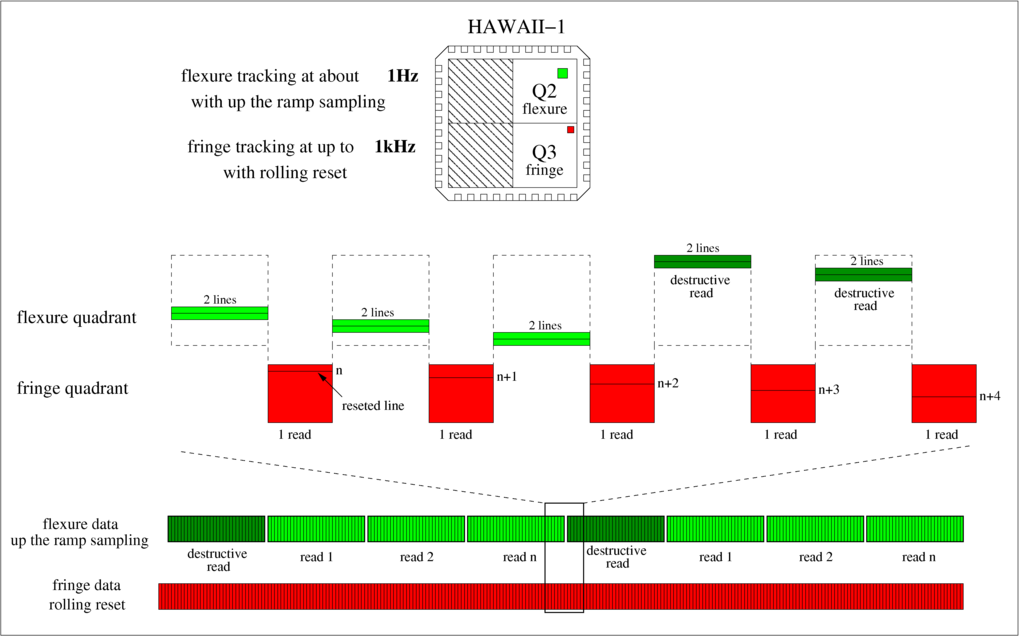 The second part of our work is the development of the LINC-NIRVANA Data Reduction Software. This software computes an image from the raw data of an observation. The first step of the reconstruction process is the calibration and preprocessing of the raw data. In the preprocessing step, the target to be reconstructed and a reference star, called the PSF (Point Spread Function), are extracted from the data. Based on this input, the iterative reconstruction process starts. The end product of this processing is a so-called deconvolved image of the measured data showing the observed object without the effects introduced by the atmosphere, the telescope or the instrument itself.

This software is available here... on our webpage. On this site, you can find a detailed description, the tutorial and the test data.