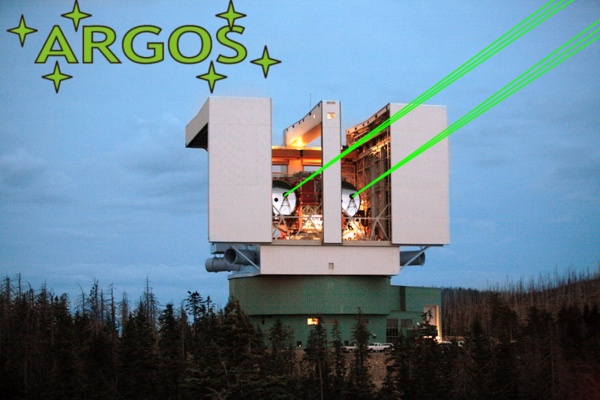 ARGOS will equip both eyes of the LBT with an adaptive optics system allowing wide-field, ground layer wavefront correction. With powerful green pulsed lasers creating laser beacons of more than sufficient brightness, a wavefront sensor with range-gated light detection, and the use of LBT's adaptive secondary mirror, we expect the ground layer adaptive optics system to enhance the image quality in almost every atmospheric condition.

Beside our contribution to the CCD characterisation for the wave front sensor we developed a photon counting unit for the tip-tilt sensor of the ARGOS project. As the laser light of the artificial guide stars is not suitable for detecting telescope tip-tilt, the light of a natural star is focused on a module of 4 Avalanche Photo Diodes (APD). Our department developed a controller unit which counts the detected photons, compensates for the APD's quantum efficiencies, calculates the centroid of the light beam and transmits the values to the Adaptive Optics control system in real-time for closed-loop correction. This approach allows a large sky coverage using faint tip-tilt stars up to 19.2 mag which cannot be achieved with other solutions using commercial CCDs. 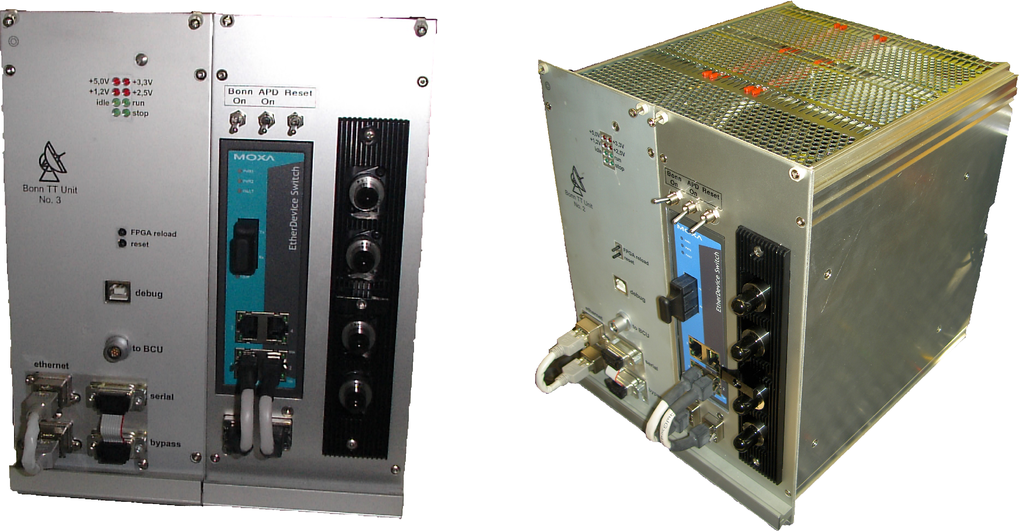 We built a first prototype consisting of parts of our speckle readout electronics for first tests. After the final design step we built up 5 identical systems from scratch. Each of the two mirrors of the LBT will be equipped with one of the units and for each unit there is a spare. The four units are already sent to different consortium partners for integration and the fifth one is kept in our institute as a reference for further developments and updates. 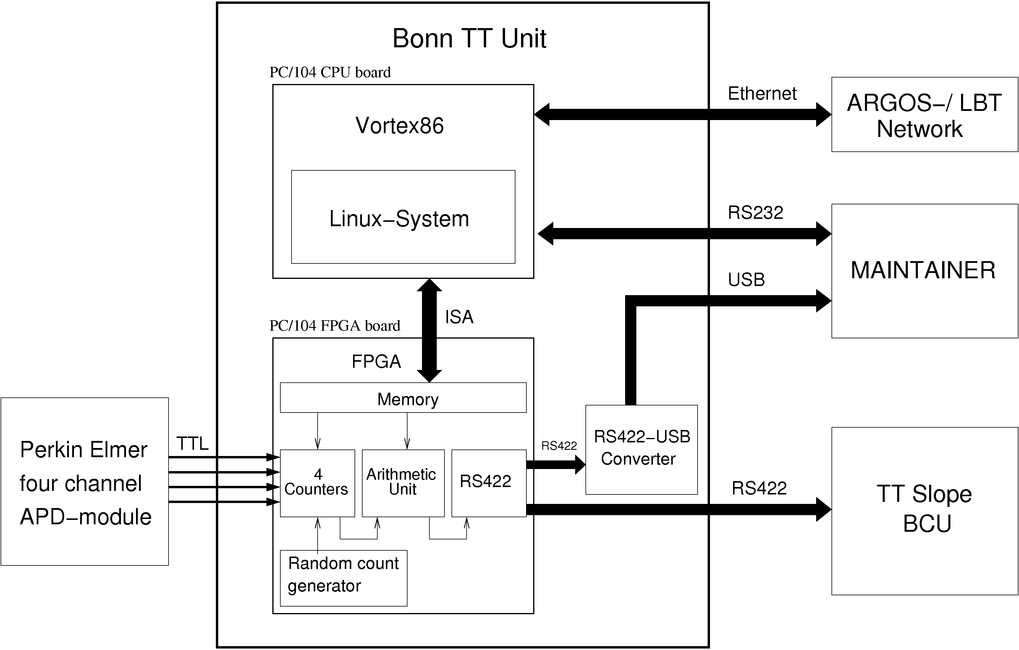 Our photon counting unit is a hybrid system consisting of a commercial single board computer (Linux-System, which is the same we use for our readout electronics) and an in-house developed printed circuit board carrying a Field Programmable Gate Array (Xilinx Spartan-3 FPGA) for the real-time calculations and the real-time data interface. The communication interface uses ethernet socket connections while the data interface is an one-directional RS-422 implementation to the Basic Computational Unit which does the adaptive optics control. In addition there is a serial terminal and an USB output for maintenance and stand alone operation.

Calculation of the Centroid

The calculation of the centroid is done inside the FPGA. The VHDL (Very High Speed Integrated Circuit Hardware Description Language) design makes strong use of the built-in multiplier features of the Spartan-3 FPGA. The arithmetics as well as the special serial protocol is implemented in hardware and therefore offering fast real-time capabilities to the control loop. The calculation of the centroid is done in three steps.

The first step is the correction of the counted values in terms of linearity, dark counts and photon quantum efficiency:

In the second step the centroid is computed from the corrected number of counts of all four APDs:

Ccn is the corrected number of counts in the nth APD in the coordinate plane.

The third step is the de-rotation:

with α describes the rotation angle. Positive angles will lead to a rotation counterclockwise.