Can we tell black holes apart?

Astrophysicists at Frankfurt, the Max Planck Institute for Radio Astronomy in Bonn, and Nijmegen, collaborating in the project BlackHoleCam, answer this question by computing the first images of feeding non-Einsteinian black holes: it is presently hard to tell them apart from standard black holes.

Their findings are published as Advance Online Publication (AOP) on the Nature Astronomy website on 16 April 2018. 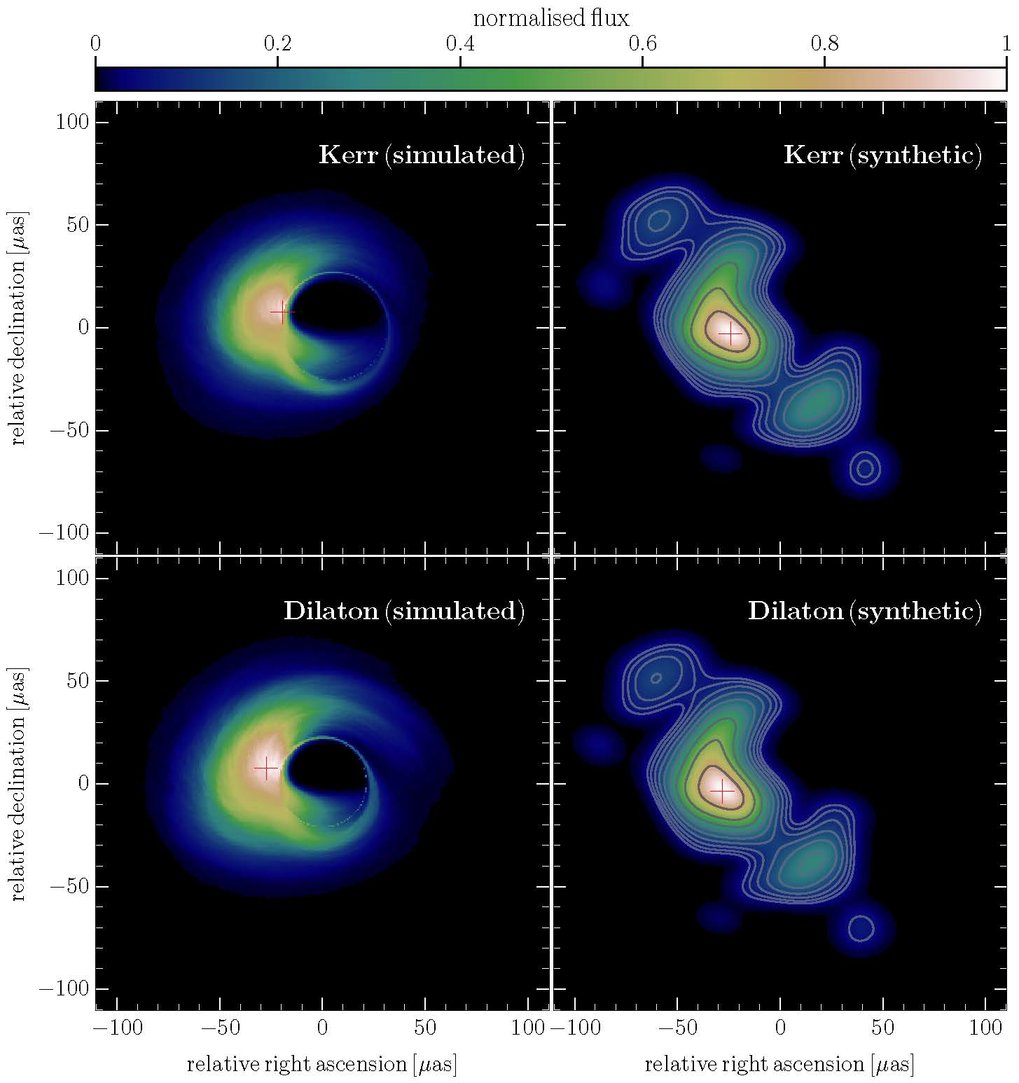 Synthetic shadow images of Sgr A* for a Kerr black hole (top row) and a non-rotating dilaton black hole (bottom row). In ... [more]

One of the most fundamental predictions of Einstein's theory of relativity is the existence of black holes. In spite of the recent detection of gravitational waves from binary black holes by LIGO, direct evidence using electromagnetic waves remains elusive and astronomers are looking for it with radio telescopes. For the first time, collaborators in the ERC funded project BlackHoleCam, including astrophysicists at Goethe University Frankfurt, Max Planck Institute for Radio Astronomy (MPIfR) Bonn, and Radboud University Nijmegen, have compared self-consistent and realistic images of the shadow of an accreting supermassive black hole – such as the black-hole candidate Sagittarius A* (Sgr A*) in the heart of our Galaxy – both in general relativity and in a different theory of gravity. The goal was to test if Einsteinian black holes can be distinguished from those in alternative theories of gravity.

Not all of the light rays (or photons) produced by matter falling onto a black hole are trapped by the event horizon, a region of spacetime from which nothing can escape. Some of these photons will reach distant observers, so that when a black hole is observed directly, a “shadow” is expected against the background sky. The size and shape of this shadow will depend on the black hole’s properties and on the theory of gravity.

Because the largest deviations from Einstein’s theory of relativity are expected very close to the event horizon, and since alternative theories of gravity make different predictions on the properties of shadow, direct observations of Sgr A* represent a very promising approach for testing gravity in the strongest regime. Making such images of the black-hole shadow is the prime goal of the international Event Horizon Telescope Collaboration (EHTC), which combines radio data from telescopes around the world.

Scientists from the BlackHoleCam Team in Europe, who are part of the EHTC, have now have gone a step further and investigated whether it is possible to distinguish between a "Kerr" black hole from Einstein’s gravity and a "dilaton" black hole, which is a possible solution of an alternative theory of gravity.

The researchers studied the evolution of matter falling into the two very different types of black holes and calculated the radiation emitted to construct the images. Furthermore, real-life physical conditions in the telescopes and interstellar medium were used to create physically realistic images. “To capture the effects of different black holes we used realistic simulations of accretion disks with near-identical initial setups. These expensive numerical simulations used state-of-the-art codes and several months on the Institute’s supercomputer LOEWE”, says Dr. Mizuno, lead author of the study.

Moreover, expected radio images obviously have a limited resolution and image fidelity. When using realistic image resolutions, the scientists found, to their surprise, that even highly non-Einsteinian black holes could disguise themselves as normal black holes.

“Our results show that there are theories of gravity in which black holes can masquerade as Einsteinian, so new techniques of analyzing EHT data may be needed to tell them apart”, remarks Luciano Rezzolla, professor at Goethe University and leader of the Frankfurt team. “While we believe general relativity is correct, as scientists we need to be open-minded. Luckily, future observations and more advanced techniques will eventually settle these doubts”, concludes Rezzolla.

“Indeed, independent information from an orbiting pulsar, which we are actively searching for, will help eliminate these ambiguities”, says Michael Kramer, director at the MPI for Radio Astronomy in Bonn. Heino Falcke (professor at Radboud University), who 20 years ago proposed using radio telescopes to image the shadow of black holes, is optimistic. “There is little doubt that the EHT will eventually obtain strong evidence of a black hole shadow. These results encourage us to refine our techniques beyond the current state of the art and thus make even sharper images in the future.

BlackHoleCam is an ERC-funded Synergy project to finally image, measure and understand astrophysical black holes. Its PIs, Falcke, Kramer and Rezzolla, test fundamental predictions of Einstein’s theory of General Relativity. The BlackHoleCam team members are active partners of the global Event Horizon Telescope Consortium (ETHC). Goethe University is a stakeholder institute and represented on the Executive board of the EHTC.