Mapping Spiral Structure on the far side of the Milky Way

The Far Side of the Milky Way

Mapping Spiral Structure for an Improved Picture of our Home Galaxy

Astronomers from the Max Planck Institute for Radio Astronomy in Bonn, Germany, and the Harvard-Smithsonian Center for Astrophysics have directly measured the distance to a star-forming region on the opposite side of our Milky Way Galaxy from the Sun, using the Very Long Baseline Array. Their achievement reaches deep into the Milky Way’s terra incognita and nearly doubles the previous record for distance measurement within our Galaxy.

Their results are published in the 13 October issue of the journal Science. 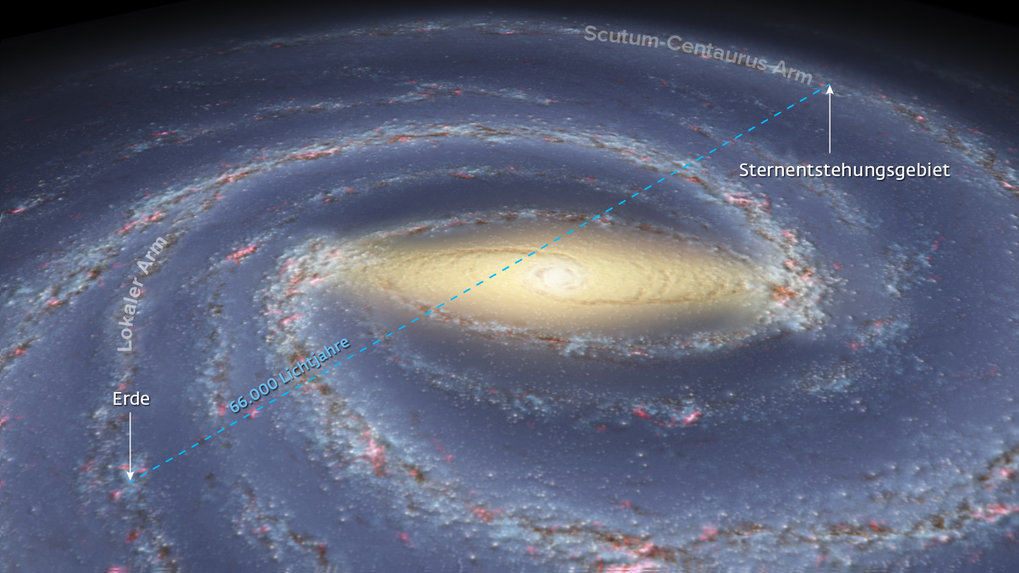 Artist’s view of the Milky Way with the location of the Sun and the star forming region (maser source G007.47+00.05) at the opposite side in the Scutum-Centaurus spiral arm.

Artist’s view of the Milky Way with the location of the Sun and the star forming region (maser source G007.47+00.05) at the opposite side in the Scutum-Centaurus spiral arm.

Distance measurements are crucial for an understanding of the structure of the Milky Way. Most of our Galaxy's material, consisting principally of stars, gas, and dust, lies within a flattened disk, in which our Solar System is embedded. Because we cannot see our Galaxy face-on, its structure, including the shape of its spiral arms, can only be mapped by measuring distances to objects elsewhere in the Galaxy.

The astronomers used a technique called trigonometric parallax, first applied by Friedrich Wilhelm Bessel in 1838 to measure the distance to the star 61 Cygni in the constellation of the Swan. This technique measures the apparent shift in the sky position of a celestial object as seen from opposite sides of the Earth's orbit around the Sun. This effect can be demonstrated by holding a finger in front of one's nose and alternately closing each eye -- the finger appears to jump from side to side.

Measuring the angle of an object's apparent shift in position this way allows astronomers to use simple trigonometry to directly calculate the distance to that object. The smaller the measured angle, the greater the distance is. In the framework of the Bar and Spiral Structure Legacy (BeSSeL) Survey, it is now possible to measure parallaxes a thousand times more accurate than Friedrich Bessel. The Very Long Baseline Array (VLBA), a continent-wide radio telescope system, with ten dish antennas distributed across North America, Hawaii, and the Caribbean, can measure the minuscule angles associated with great distances. In this case, the measurement was roughly equal to the angular size of a baseball on the Moon.

"Using the VLBA, we now can accurately map the whole extent of our Galaxy," says Alberto Sanna, of the Max Planck Institute for Radio Astronomy in Germany (MPIfR).

"Most of the stars and gas in our Galaxy are within this newly-measured distance from the Sun. With the VLBA, we now have the capability to measure enough distances to accurately trace the Galaxy's spiral arms and learn their true shapes," Sanna explains.

The VLBA observations measured the distance to a region where new stars are being formed. Such regions include areas where molecules of water and methanol act as natural amplifiers of radio signals -- masers, the radio-wave equivalent of lasers for light waves. This effect makes the radio signals bright and readily observable with radio telescopes.

The Milky Way has hundreds of such star-forming regions that include masers. "So we have plenty of 'mileposts' to use for our mapping project. But this one is special: Looking all the way through the Milky Way, past its center, way out into the other side", says the MPIfR's Karl Menten.

The astronomers' goal is to finally reveal what our own Galaxy looks like if we could leave it, travel outward perhaps a million light-years, and view it face-on, rather than along the plane of its disk. This task will require many more observations and much painstaking work, but, the scientists say, the tools for the job now are in hand. How long will it take?

"Within the next 10 years, we should have a fairly complete picture," predicts Mark Reid of the Harvard-Smithsonian Center for Astrophysics.

The research team consists of Alberto Sanna of the Max Planck Institute for Radio Astronomy (MPIfR), the first author, along with colleagues Mark Reid and Thomas Dame of the Harvard-Smithsonian Center for Astrophysics and Karl Menten and Andreas Brunthaler, also of the MPIfR. They report their findings in the 13 October issue of the journal Science.

The BeSSeL Survey (Bar and Spiral Structure Legacy Survey) is a VLBA Key Science project. The survey is named in honor of Friedrich Wilhelm Bessel (1784-1846) who measured the first stellar parallax in 1838. The goal of the survey is to study the spiral structure and kinematics of the Milky Way. 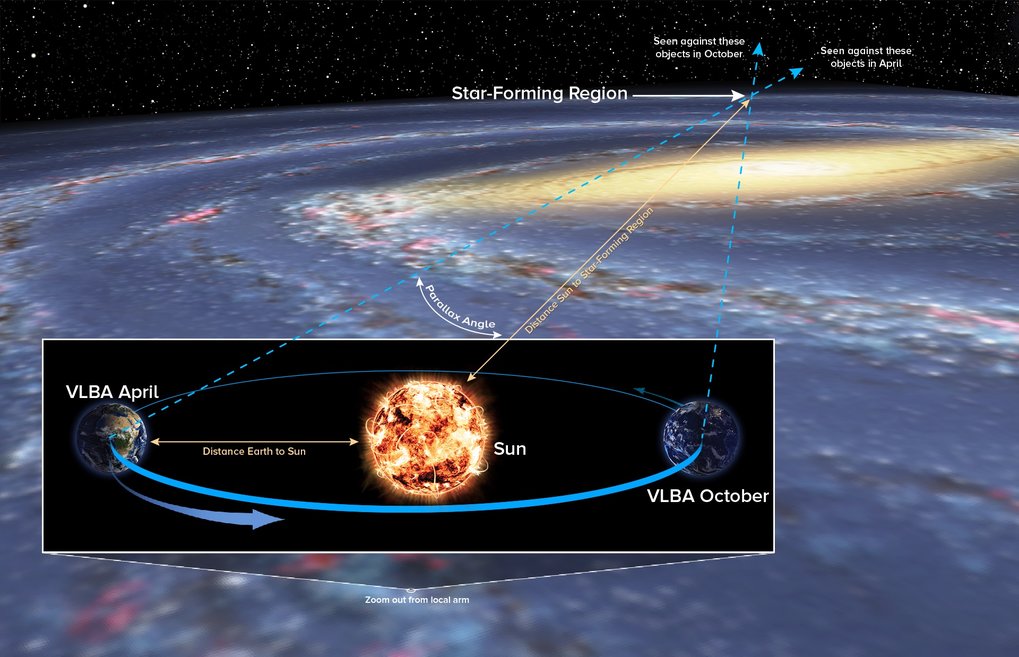 [less]
Distance determination by measuring the angle of apparent shift in an object's position, as seen from opposite sides of Earth's orbit around the Sun (trigonometric parallax technique).