Video: Zooming-in to the heart of M87 to see a new view of its black hole
Zoom-Video by ESO (MP, (81 MB). Credit: © ESO/L. Calçada, Digitized Sky Survey 2, ESA/Hubble, RadioAstron, De Gasperin et al., Kim et al., EHT Collaboration. Music: Niklas Falcke.
Video: The M 87 image as seen through a light polarizer
Caption: The M 87 image as seen with a polarizer (MP4, 11.8 MB).
Representation of the effect of a polarizer and how the polarization vectors in the M 87 ring image are produced from the combination of different linearly polarized components.
Credit: © Iván Martí-Vidal/Universitat de València, EHT Collaboration.
Video: What Is Polarization
What Is Polarization | Event Horizon Telescope (MP4, 19.1 MB).
Light is an oscillating electromagnetic wave. If the waves have a preferred direction of oscillation, they are polarized. In space, moving hot gas, or ‘plasma’, threaded by a magnetic field emits polarized light. The polarized light rays that manage to escape the pull of the black hole travel to a distant camera. The intensity of the light rays and their direction are what we observe with the Event Horizon Telescope.
Credit: © EHT Collaboration and Fiks Film.
Video: Magnetic fields and black hole images
How Magnetic Fields Affect Black Hole Images | Event Horizon Telescope
Black holes are enveloped in plasma. This plasma has magnetic fields—areas where magnetism affects how matter moves—threaded throughout. As the magnetic field grows stronger, it changes shape and the polarized light we measure exhibits different patterns.
Credit: © EHT Collaboration and Crazybridge Studios.
Animated image: Transition between the observed polarization image and a best-fit theory image
Transition between the observed polarization image and a best-fit theory image
Credit: © Monika Mościbrodzka & Sara Issaoun, Radboud Universiteit Nijmegen, EHT Collaboration
Animated GIF (7.6 MB).
Image: Composite Visual of the M 87 jet and ring in polarisation
View of the M 87 supermassive black hole and jet in polarized light (Landscape PDF, 8.6 MB).
This composite image shows three views of the central region of the Messier 87 (M87) galaxy in polarised light, namely, from top to bottom, with the Chile-based Atacama Large Millimeter/submillimeter Array (ALMA), the National Radio Astronomy Observatory’s Very Long Baseline Array (VLBA) in the US, and with the Earth-sized telescope synthesized by the Event Horizon Telescope.
Credit: © EHT Collaboration; ALMA (ESO/NAOJ/NRAO), Goddi et al.; VLBA (NRAO), Kravchenko et al.; J.C. Algaba, I. Martí-Vidal.

The Event Horizon Telescope (EHT) team, including astronomers at the Max-Planck-Institut für Radioastronomie, has revealed today new observations that are key to explaining how the M 87 galaxy is able to launch an energetic jet from its core. The new view of the massive object at the centre of the M 87 galaxy shows how it looks in polarised light. For the first time, astronomers have been able to measure the polarisation, a signature of magnetic fields, this close to the edge of a black hole. They publish a key snapshot in order to understand how a jet larger than the galaxy is launched.

The results are published in two papers in this week’s issue of the Astrophysical Journal Letters. 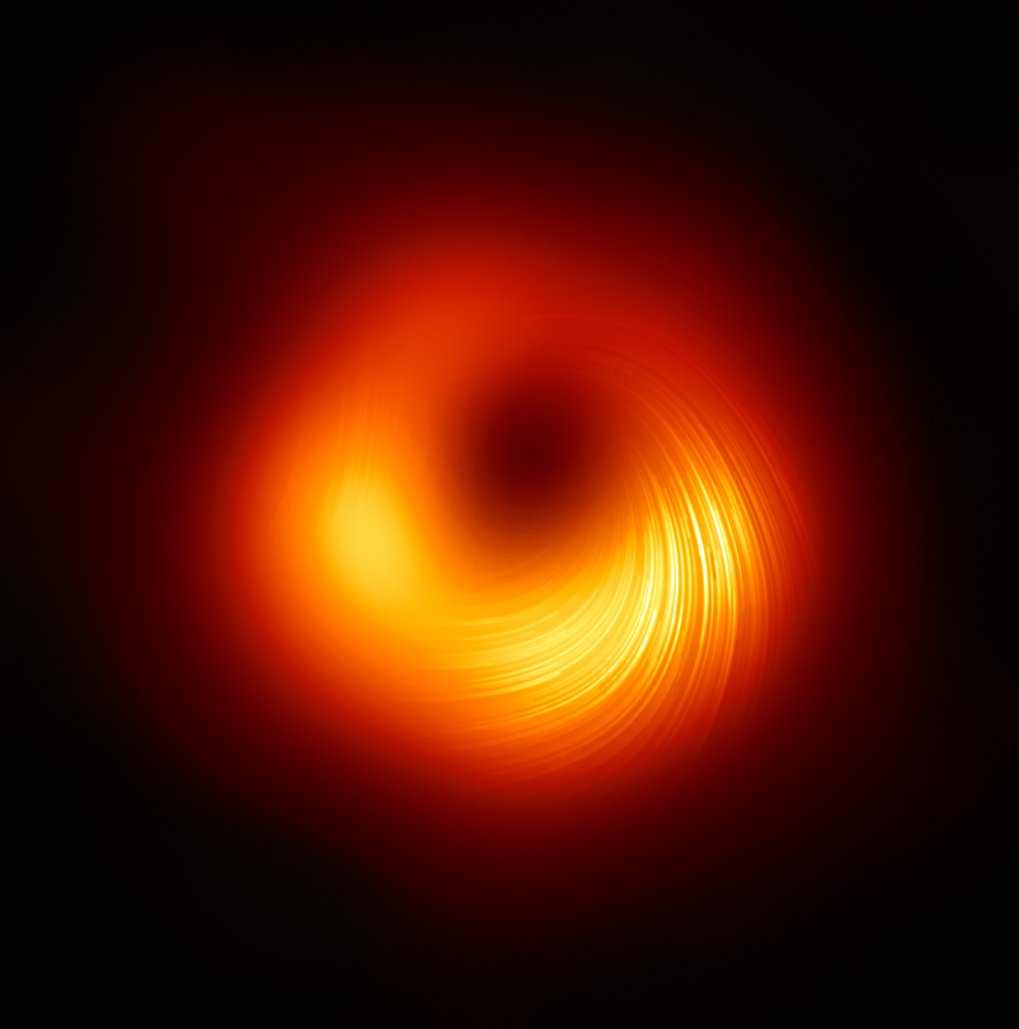 Polarisation in the very centre of galaxy M87. Polarization “field lines" are plotted atop an underlying total intensity ... [more]

Polarisation in the very centre of galaxy M87. Polarization “field lines" are plotted atop an underlying total intensity image (the “shadow of a black hole” image from April 2019).  To emphasize the regions with stronger polarisation detections, length and opacity of the streamlines are scaled with the polarised intensity.

Polarisation in the very centre of galaxy M87. Polarization “field lines" are plotted atop an underlying total intensity image (the “shadow of a black hole” image from April 2019).  To emphasize the regions with stronger polarisation detections, length and opacity of the streamlines are scaled with the polarised intensity.

On 10 April 2019, the first ever image of a black hole was released, revealing a bright ring-like structure with a dark central region — the black hole’s shadow. Since then, the EHT collaboration has delved deeper into their data, collected by telescopes around the globe in 2017, discovering that a significant fraction of the light around the supermassive black hole at the heart of the M87 galaxy in a distance of 55 million light years is polarised.

The physics behind the first image of a black hole

“The polarisation of light carries information that allows us to better understand the physics behind the image we saw in April 2019,” explains Monika Mościbrodzka, Coordinator of the EHT Polarimetry Working Group and Assistant Professor at Radboud University in the Netherlands.

Light becomes polarised when it goes through certain filters, like the lenses of polarised sunglasses, or when it is emitted in hot regions of space that are magnetised. In the same way polarised sunglasses help us see better by reducing reflections and glare from bright surfaces, astronomers can sharpen their vision of the region around the black hole by looking at how the light originating from there is polarised. Specifically, polarisation allows astronomers to map the magnetic field lines present at the inner edge of the black hole.

“This is key to understanding the powerful jet that is launched from this region,” says Alan Roy, project scientist for VLBI (Very Large Baseline Interferometry) with MPIfR’s APEX (the Atacama Pathfinder Experiment) telescope in northern Chile.

The bright jet of energy and matter that emerges from M87’s core and extends at least 100,000 light-years from its centre is one of the galaxy’s most mysterious and energetic features. Most matter lying close to the edge of a black hole falls in. However, some of the surrounding particles escape moments before capture and are blown far out into space in the form of a jet.

How matter behaves near a black hole

Astronomers have relied on different models of how matter behaves near the black hole to better understand this process. But they still don’t know exactly how a jet larger than the galaxy is launched from a very compact region at its centre — comparable in size to the Solar System. With the new EHT image of the black hole and its shadow in polarised light, astronomers managed for the first time to make a key snapshot of the launching mechanism at the scales where the jet is forming.

Observing the heart of M87

To observe the very compact launching region of the jet at the heart of the M 87 galaxy, the collaboration linked eight telescopes around the world, including APEX and the IRAM 30-m telescope in Pico Veleta, Spain, to create a virtual Earth-sized telescope, the EHT.  Data were put together and processed at two special-purpose high-performance computers, called correlators, one of them at the MPIfR in Bonn.  The impressive resolution of 20 micro-arcseconds only obtained with the EHT is equivalent to that needed to measure the length of a credit card on the surface of the Moon.

This allowed the team to directly observe the black hole shadow and the ring of light around it, with the new polarised-light image clearly showing that the ring is magnetised. The results are published in two separate papers in The Astrophysical Journal Letters by the worldwide EHT collaboration project, which involves over 300 researchers from multiple organisations and universities.

“The EHT is a one-of-a-kind facility to test the laws of physics in a region of extreme gravity. It gives us a unique chance to look at phenomena we have never studied. Future EHT observations will reveal even more information about the mysterious region of space near the event horizons of supermassive black holes”, concludes J. Anton Zensus, founding chairman of the EHT collaboration and director at the MPIfR.

This research was presented in two papers published on March 24, 2021 in The Astrophysical Journal. The EHT collaboration involves more than 300 researchers from Africa, Asia, Europe, North and South America. The international collaboration is working to capture the most detailed black hole images ever obtained by creating a virtual Earth-sized telescope. Supported by considerable international investment (including the ERC-funded Black Hole Camera project, for which Michael Kramer, director at the MPI für Radioastronomie, is one of the three principal investigators), the EHT links existing telescopes using novel systems — creating a fundamentally new instrument with the highest angular resolving power that has yet been achieved.

The telescopes work together using a technique called very-long-baseline interferometry (VLBI), synchronising facilities around the world and exploiting the rotation of our planet to form one huge, Earth-size telescope. VLBI allows the EHT to achieve a resolution of 20 micro-arcseconds only. The data analysis to transform raw data to an image was performed with two specific computers (named correlators), hosted by the Max-Planck-Institut für Radioastronomie in Bonn and the MIT Haystack Observatory.

With the EHT data of M87, the team got to work to find out which models matched the observations. They run 120 different models of how matter behaves near a supermassive black hole and got 72 000 snapshots of these models at different running times, which they then compared with the new image. They found that only 73 snapshots, corresponding to 15 models, could explain the data. All of these 15 models assume magnetic fields of high intensity are present in the region around the black hole, suggesting that strong magnetic fields are key to launching the jet.

Participants of the Event Horizon Telescope (EHT) Polarisation Workshop, held at the Max-Planck-Institut für Radioastronomie in Bonn in July 2019 before the outbreak of the COVID-19 pandemic.

Participants of the Event Horizon Telescope (EHT) Polarisation Workshop, held at the Max-Planck-Institut für Radioastronomie in Bonn in July 2019 before the outbreak of the COVID-19 pandemic.