The Wobbling Shadow of the M87* Black Hole

The ring around the M 87* black hole shadow glitters

In 2019, the Event Horizon Telescope (EHT) Collaboration delivered the first image of a black hole, revealing M 87*—the supermassive object in the center of the Messier 87 galaxy. The EHT team, a collaboration with strong engagement of the MPI für Radioastronomie, has now used the lessons learned last year to analyze the archival data sets from 2009-2013, some of them not published before. The contribution of the APEX telescope is very important for the success of this analysis.

The results, published in the present issue of The Astrophysical Journal, reveal that the shadow was already present in earlier data, although it could not be stated with confidence at this time. The models indicate persistence of the ring-like shadow feature, but also variation of its orientation and azimuthal brightness distribution—the ring appears to be glittering. 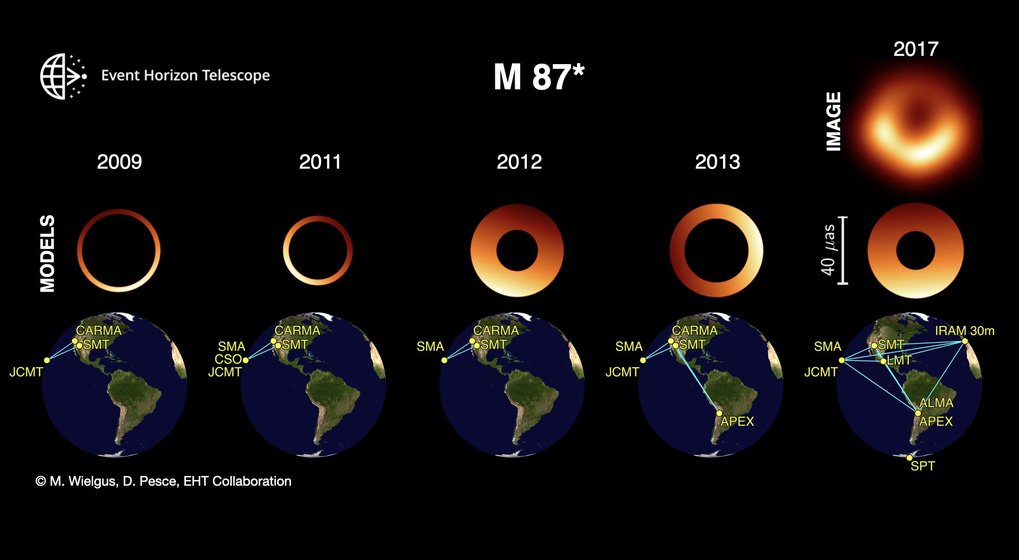 The EHT is a global array of telescopes, performing synchronized observations using the technique of Very Long Baseline Interferometry (VLBI). Together they form a virtual Earth-sized radio dish, providing an uniquely high image resolution. In 2009-2013 M 87* was observed by early-EHT prototype arrays, with telescopes located at three geographical sites in 2009-2012, and four sites in 2013 (see illustration). In 2017 the EHT reached maturity with telescopes located at five distinct geographical sites across the globe.  Alan Roy, project scientist for VLBI in APEX at the Max-Planck-Institut für Radioastronomie (MPIfR), says: “The addition of southern telescopes in Chile, namely APEX in 2013 and ALMA in 2016, further improved the angular resolution and paved the way for the high fidelity imaging in 2017”.

“The results announced in April 2019 show an image of the shadow of a black hole, consisting of a bright ring formed by hot plasma swirling around M 87*, and a dark central part, where we expect the event horizon of the black hole to be”, reminds Maciek Wielgus, astronomer at Harvard University, and lead author of the new paper.  However, those results were based only on observations performed throughout a one-week long time window in April 2017, which is far too short to see  if the ring is evolving over longer time scales.  Even after careful data analysis, therefore some open questions with regard to the stationarity of the ring features over time remained. For that reason, an investigation of earlier archival data was considered.

The 2009-2013 observations consist of far less data than the ones performed in 2017, making it hard to image M 87 without a-priori assumptions.  For the available archive data, the EHT team used statistical modeling based on geometrical assumptions to look at changes in the appearance of M 87* over time.

Expanding the analysis to the 2009-2017 observations, scientists have shown that M 87* adheres to theoretical expectations. The black hole’s shadow diameter has remained consistent with the prediction of Einstein’s theory of general relativity for a black hole of 6.5 billion solar masses.  The morphology of an asymmetric ring persists on timescales of several years, in a consistent manner which provides additional confidence about the nature of M 87* and the origin of its shadow.

But while the diameter of the ring remained  constant over time, the EHT team found that the data were hiding a surprise.  Thomas Krichbaum, astronomer at the MPIfR and one of the leading authors of the publication, says: “The data analysis suggests that the orientation and fine structure of the ring varies with time. This gives a first impression on the dynamical structure of the accretion flow, which surrounds the  event horizon”.  He adds: “Studying this region will be crucial for a better understanding of how black holes accrete matter and launch relativistic jets.”

The gas falling onto a black hole heats up to billions of degrees, ionizes and becomes turbulent in the presence of magnetic fields.  Since the flow of matter is turbulent, the ring brightness appears to glittering with time, which challenges some theoretical models of accretion.

“The monitoring of the time variable structure of M87 with the EHT is a challenge that will keep us busy over the next few years.  We are working in the analysis of the 2018 data, and preparing newer observations in 2021, with the addition of new sites such as the NOEMA Observatory in France, the Greenland Telescope, and Kitt Peak in Arizona.  The enhanced imaging capabilities provided by this  extended array will provide  a more detailed view on the shadow of the black hole M 87* and on the innermost jet of the M 87 radio galaxy.” concludes Anton Zensus, Director at the MPIfR and Founding Chairman of the EHT Collaboration Board.

The international collaboration of the Event Horizon Telescope announced the first-ever image of a black hole at the heart of the radio galaxy Messier 87 on April 10, 2019 by creating a virtual Earth-sized telescope. Supported by considerable international investment, the EHT links existing telescopes using novel systems — creating a new instrument with the highest angular resolving power that has yet been achieved.

The EHT consortium consists of 13 stakeholder institutes; the Academia Sinica Institute of Astronomy and Astrophysics, the University of Arizona, the University of Chicago, the East Asian Observatory, the Harvard-Smithsonian Center for Astrophysics, the Goethe- Universität Frankfurt, the Institut de Radioastronomie Millimétrique, the Large Millimeter Telescope, the Max-Planck-Institut für Radioastronomie, the MIT Haystack Observatory, the National Astronomical Observatory of Japan, the Perimeter Institute for Theoretical Physics, and the Radboud University.

MPIfR co-authors of the work 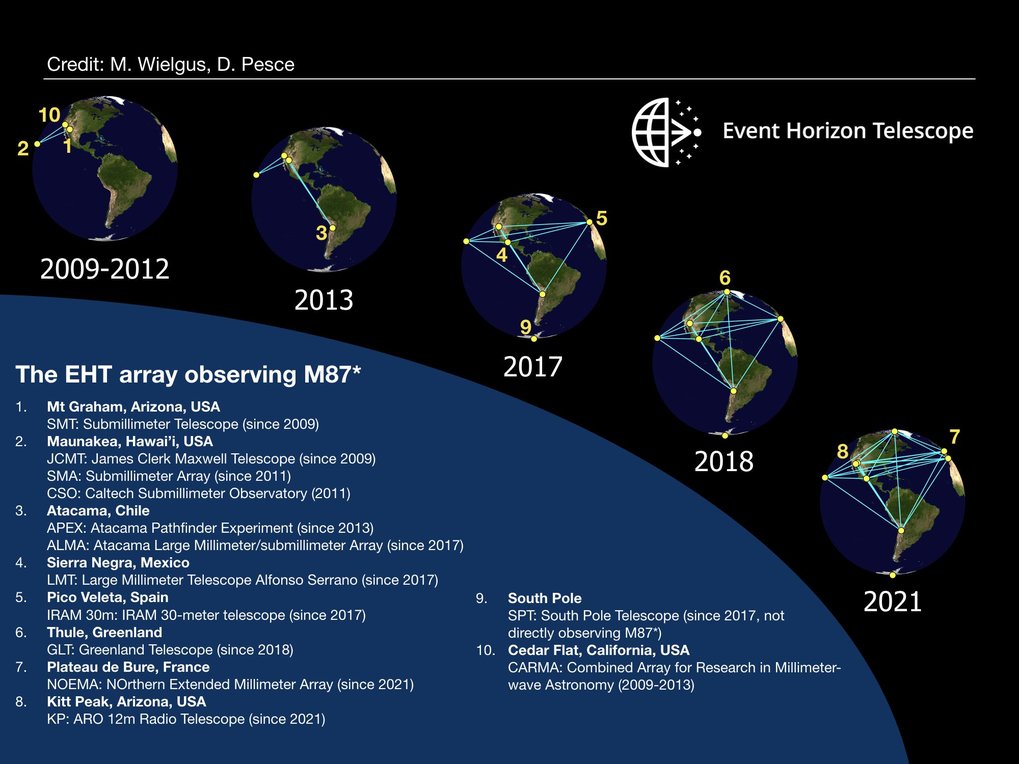