The Distances of the Stars

Resolving Long-standing Mysteries About the First Parallaxes in Astronomy

In 1838, Friedrich Wilhelm Bessel won the race to measure the first distance to a star other than our Sun via the trigonometric parallax – setting the first scale of the Universe.

Recently, Mark Reid and Karl Menten, who are engaged in parallax measurements at radio wavelengths, revisited Bessel’s original publications on “his” star, 61 Cygni, published in the Astronomische Nachrichten (Astronomical Notes).  While they could generally reproduce the results obtained by Bessel and two contemporary 19th century astronomers, the eminent Friedrich Georg Wilhelm von Struve and Thomas Henderson, they discovered why some of these early results were statistically inconsistent with modern measurements.

Out of reverence for Bessel, Reid and Menten decided to publish their findings also in the Astronomische Nachrichten. Founded in 1821, it was one of the first astronomical journals in the world and is the oldest that is still being published. 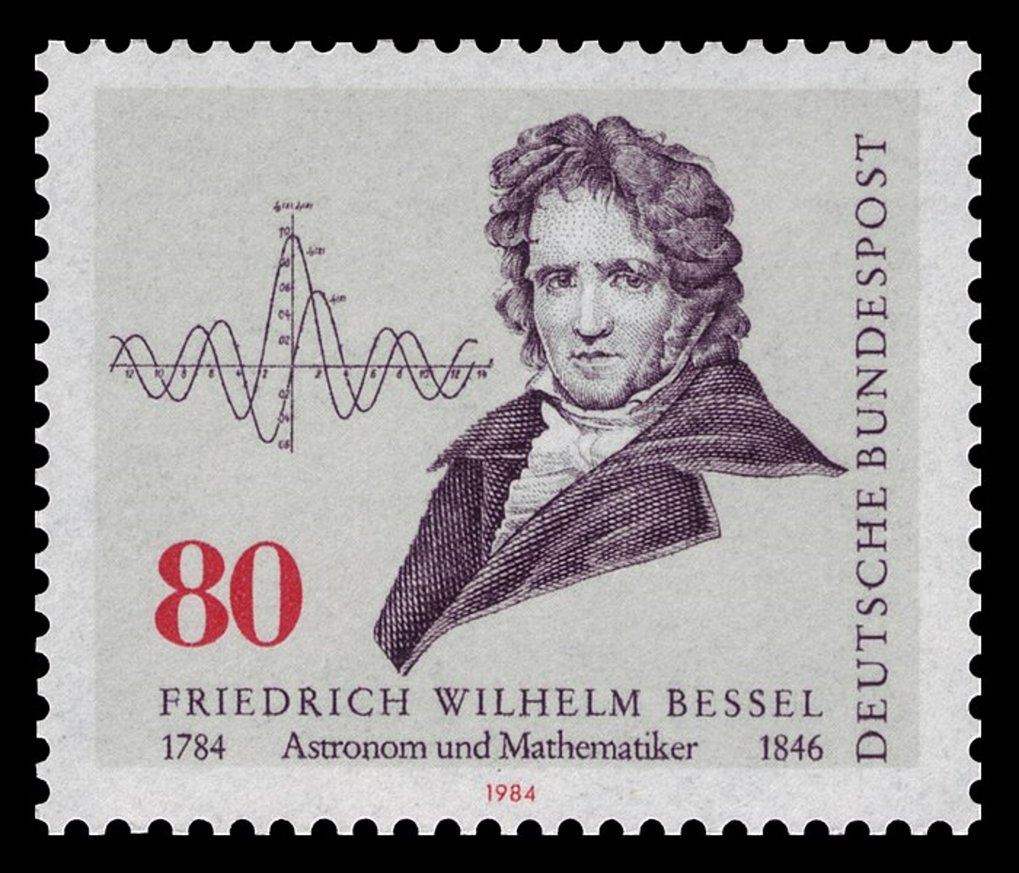 Stamp issued by the German federal post office in 1984, on the occasion of the 200th anniversary of Friedrich Wilhelm ... [more]

Stamp issued by the German federal post office in 1984, on the occasion of the 200th anniversary of Friedrich Wilhelm Bessel’s birth.

Stamp issued by the German federal post office in 1984, on the occasion of the 200th anniversary of Friedrich Wilhelm Bessel’s birth.

Knowing the distance to astronomical objects is of fundamental importance for all of astronomy and for assessing our place in the Universe.  The ancient Greeks placed the unmoving “fixed” stars farther away than the celestial spheres on which they thought the planets were moving.  However, the question “how much farther?” eluded an answer for centuries after astronomers started trying to address it. Things came to a head in the late 1830s, when three astronomers zeroed in on different stars, spending many nights at their telescope, often under harsh conditions. It was Friedrich Wilhelm Bessel who won the race in 1838 by announcing that the distance to the double-star system 61 Cygni is 10.4 light years.  This proved that stars are not just a little farther away from us than planets, but more than a million times farther – a truly transformational result that totally revised the scale of the Universe as it was known in the 19th century.

Bessel’s measurement was based on the trigonometric parallax method. This technique is essentially triangulation, which is used by surveyors to determine distances on land. Astronomers measure the apparent position of a “nearby” star against much more distant stars, using the Earth’s orbit around the Sun to provide different vantage points over a year’s time.

Bessel had to make his pain-staking measurements over nearly 100 nights at his telescope. Astronomers now are far more “efficient”. The Gaia space mission is measuring accurate distances for hundreds of millions of stars, with great impact on astronomy. However, because of interstellar dust that pervades the Milky Way’s spiral arms, Gaia has difficulties observing stars within the Galactic plane that are farther from the Sun than about 10,000 light years – this is just 20% of the Milky Way’s size of more than 50,000 light years. Therefore, even a mission as powerful as Gaia will not yield the basic layout of our Galaxy, many aspects of which are still under debate – even the number of spiral arms is uncertain.

In order to better address the structure and size of the Milky Way, Mark Reid from the Center for Astrophysics | Harvard-Smithsonian and Karl Menten from the Max Planck Institute for Radio Astronomy (MPIfR) initiated a project to determine the distances to radio sources that are constrained to spiral arms of the Milky Way. Their telescope of choice is the Very Long Baseline Array, a collection of 10 radio telescopes spanning from Hawaii in the west to the eastern tips of the USA. By combining the signals of all 10 telescopes thousands of kilometers apart one can make images of what one could see were our eyes sensitive to radio waves and separated by nearly the size of the Earth.

This project is carried out by an international team, with scientists of the MPIfR making major contributions – MPIfR director Karl Menten has enjoyed a fruitful collaboration with Mark Reid for more than 30 years. When, near the start of the project, a catchy acronym was discussed, they chose to name it the Bar and Spiral Structure Legacy Survey, in short the BeSSeL Survey. Of course, they had the great astronomer and mathematician and parallax pioneer Friedrich Wilhelm Bessel on their mind.

As in all experimental or observational science, measurements only attain meaning if their uncertainties can be determined in a reliable way. This is also the bread and butter in radio astrometry and is given close attention by the BeSSeL project astronomers. In Bessel’s time, astronomers had learned to pay attention to measurement errors and to account for them when deriving results from their data. This often involved tedious calculations done entirely with pencil and paper. Naturally, a scientist of Bessel’s caliber was well aware to follow any issues that could possibly affect his observations.  He realized that temperature variations in his telescope could critically affect his delicate measurements. Bessel had a superb instrument at his observatory at Königsberg in Prussia (the present Russian Kaliningrad), which came from the genius instrument maker Joseph Fraunhofer and was the last one he built.  Nevertheless, variable temperature had a major impact on the observations required for a parallax measurement, which must be spread over an entire year; some are made in hot summer and others in cold winter nights.

Mark Reid became interested in Bessel’s original work and studied his papers on 61 Cygni. He noticed some small inconsistencies in the measurements. To address these he and Karl Menten started to dig deeper into the original literature. Bessel’s papers were first published in German, in the Astronomische Nachrichten, although some excerpts were translated into English and appeared in the Monthly Notices of the Royal Astronomical Society. Thus, the original German versions had to be examined, where Menten’s native German came in handy.

Reid and Menten also put the results of Bessel’s closest competitors under scrutiny. Thomas Henderson, who worked in Cape Town, South Africa, targeted α Centauri, the star system now known to be the closest to our Sun. Shortly after Bessel announced his result, Henderson published a distance to this star.

The eminent astronomer Friedrich Georg Wilhelm von Struve measured α Lyrae (Vega). The literature search for von Struve’s data involved some detective work. A detailed account of it was only published in Latin as a chapter of a voluminous monograph. The MPIfR librarian traced a copy to the Bavarian State library, which provided it in electronic form. It has long been a mystery as to why von Struve announced a tentative distance to Vega, one year before Bessel’s result for 61 Cygni, only to revise it to double that distance later with more measurements. It seems that von Struve first used all of his measurements, but in the end lost confidence in some and discarded those. Had he not done so, he probably would have received more credit.

Reid and Menten can generally reproduce the results obtained by all three astronomers, but found that von Struve and Henderson underestimated some of their measurement uncertainties, which made their parallaxes appear somewhat more significant than they actually were. “Looking over Bessel’s shoulder was a remarkable experience and fun,” says Mark Reid. “Viewing this work both in an astronomical and historical context has really been fascinating”, concludes Karl Menten.

Principle of Stellar Parallax: One wants to determine the distance, D, to a nearby (foreground) star. Over the course of a year, that star’s position apparently changes relative to the positions of faraway background stars and prescribes an ellipse that is a projection of the Earth’s orbit around the Sun. Its semi-major axis is the parallax angle π. The distance in “astronomical units” is then simply given by D = 1/ π. One astronomical unit, AU, the Earth-Sun distance is equal to approximately 150 million kilometers. The distance at which an object would have a parallax of 1 arcsecond is called one parsec (pc). It is the basic distance unit used by astronomers and corresponds to approx. 3.26 light years or 206,000 AU.