The GREAT Instrument aboard SOFIA traces a very special molecule

HeH+ was the first molecule that formed when, almost 14 billion years ago, falling temperatures in the young Universe allowed recombination of the light elements produced in the Big Bang. At that time, ionized hydrogen and neutral helium atoms reacted to form HeH+.

Despite its importance in the history of the early Universe, HeH+ has so far escaped detection in astrophysical nebulae. Operating the GREAT far-infrared spectrometer onboard the flying observatory SOFIA, an international research team led by Rolf Güsten from the Max-Planck-Institut für Radioastronomie (MPIfR) in Bonn, Germany, reports the unambiguous detection of the molecule towards the planetary nebula NGC 7027.

The results are published in this week’s issue of Nature. 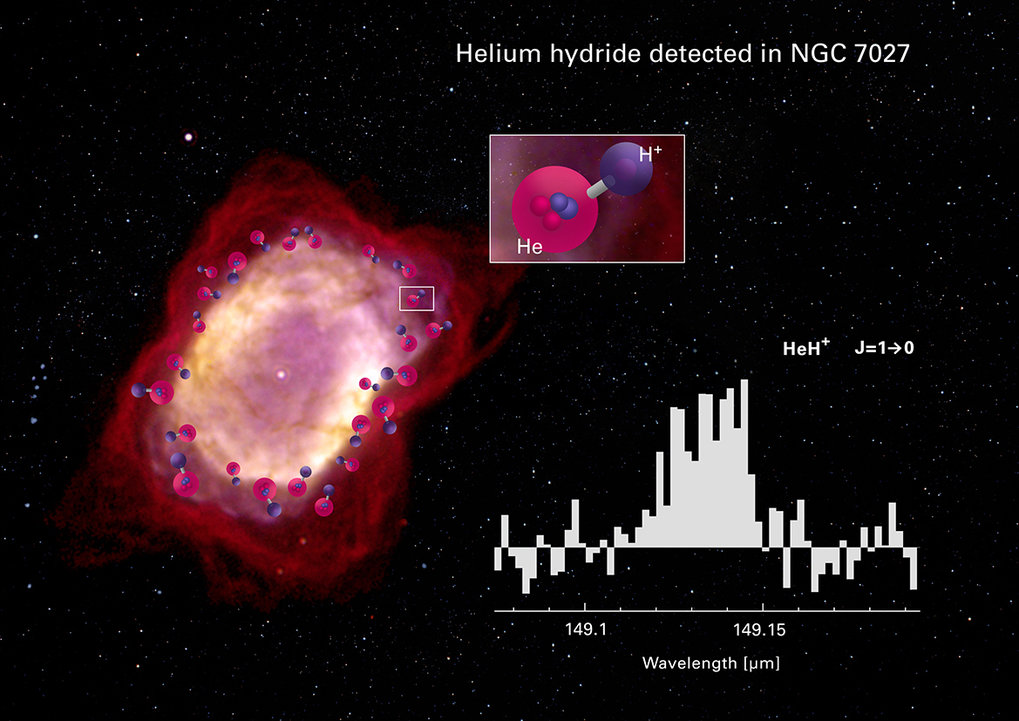 Spectrum of HeH+ as observed with GREAT on board of SOFIA towards the planetary nebula NGC 7027.  In the underlying ... [more]

Spectrum of HeH+ as observed with GREAT on board of SOFIA towards the planetary nebula NGC 7027.  In the underlying image from the Hubble/NICMOS camera, the sharp transition zone between the ionized HII region (white-yellow) and the cool envelope (red colour) is nicely visible. It is in this ionization front where HeH+ is formed (marked by an artist’s concept of the molecular structure). The sky area covered by the GREAT instrument with a size of 14.3 arcsec includes most of the nebula’s emission. The spectral line width of the HeH+ profile is determined by the motion of the expanding envelope.

Spectrum of HeH+ as observed with GREAT on board of SOFIA towards the planetary nebula NGC 7027.  In the underlying image from the Hubble/NICMOS camera, the sharp transition zone between the ionized HII region (white-yellow) and the cool envelope (red colour) is nicely visible. It is in this ionization front where HeH+ is formed (marked by an artist’s concept of the molecular structure). The sky area covered by the GREAT instrument with a size of 14.3 arcsec includes most of the nebula’s emission. The spectral line width of the HeH+ profile is determined by the motion of the expanding envelope.

During the dawn of chemistry when the temperature in the young Universe had fallen below ~4000 K, the ions of the light elements (hydrogen, helium, deuterium and traces of lithium) produced in Big Bang nucleosynthesis recombined in reverse order of their ionization potential. Helium combined first with free electrons to form the first ever neutral atom. At that time hydrogen was still ionized (present in form of bare protons). Helium atoms combined with these protons into the helium hydride ion HeH+, the Universe’s first molecular bond. As recom¬bi¬nation progressed, HeH+ reacted with then neutral hydrogen and created a first path to the forma¬tion of molecular hydrogen - marking the beginning of the modern Universe.

Despite its unquestioned importance in the history of the early Universe, the HeH+ molecule has so far escaped detection in interstellar space. Studied in the laboratory as long ago as 1925, dedicated searches during the last decades have been unsuccessful, thereby challenging our understanding of the underlying chemical networks. “The chemistry of the Universe began with HeH+. The lack of definitive evidence of its very existence in interstellar space has been a dilemma for astronomy for a long time”, says Rolf Güsten from the MPIfR, first author of the paper and Principal Investigator of the GREAT project until October 2018.

In the late 1970s, astro-chemical models suggested the possibility that HeH+ might exist at detectable abundances in local astrophysical nebulae, and would be most easily observed in so-called planetary nebula, ejected by sun-like stars in the last stage of their lifetime. The hard radiation field produced by the central white dwarf star with a temperature of more than 100,000 degrees drives ionization fronts into the ejected envelope, where HeH+ is predicted to form.

The molecule will emit its strongest spectral line at a characteristic wavelength of 0.149 mm (or a frequency of 2.01 terahertz). Unfortunately, Earth’ atmosphere is opaque at this wavelength for ground-based observatories, requiring this search to be performed from space or a high-flying observatory like SOFIA cruising above the absorbing layers of the lower atmosphere. “With recent advance¬ments in terahertz technologies is has now become possible to perform high-resolution spectroscopy at the required far-infrared wavelength”, explains Rolf Güsten. Operating the GREAT spectrometer aboard SOFIA the team now reports the unequivocal detection of HeH+ towards the envelope of the planetary nebula NGC 7027.

“The discovery of HeH+ is a dramatic and beautiful demonstration of Nature's tendency to form molecules", says David Neufeld from the Johns Hopkins University in Baltimore, a co-author of the paper. ”Despite the unpromising ingredients that are available, a mixture of hydrogen with the unreactive noble gas helium, and a harsh environment at thousands of degrees Celsius, a fragile molecule forms. Remarkably, this phenomenon can not only be observed by astronomers but also understood using theoretical models that we have developed.”

The detection of this special molecule brings a long search to a happy ending, and eliminates doubts that we might not understand the underlying formation and destruction as well as we thought. It is a reward for many years of instrument development work, and underlines the scientific value of airborne far-infrared astronomy.

The GREAT far-infrared spectrometer is mounted to the telescope flange of the flying observatory SOFIA, inside the ... [more]

The GREAT far-infrared spectrometer is mounted to the telescope flange of the flying observatory SOFIA, inside the pressurized cabin.

The GREAT far-infrared spectrometer is mounted to the telescope flange of the flying observatory SOFIA, inside the pressurized cabin.

SOFIA is a Boeing 747SP jetliner modified to carry a 2.7-m diameter telescope. It is a joint project of the National Aeronautics and Space Administration (NASA) in the USA and the German Aerospace Center (DLR). NASA’s Ames Research Center in California’s Silicon Valley manages the SOFIA program, science and mission operations in cooperation with the Universities Space Research Association headquartered in Columbia, Maryland, and the German SOFIA Institute (DSI) at the University of Stuttgart. The aircraft is maintained and operated from NASA’s Armstrong Flight Research Center Hangar 703, in Palmdale, California.

GREAT: The German Receiver for Astronomy at Terahertz Frequencies is a high-resolution spectro¬meter for astronomical observations at far-infrared wavelengths (0.06-0.60 mm), operating in a wavelength regime that generally is not accessible from ground-based observatories due to absorption in the terrestrial atmosphere. The instrument’s modular design allows integration of new technological advancements on short notice, thereby opening now the path to observe at the wavelength of HeH+ (0.149 mm wavelength, 2.01 THz frequency). GREAT has been operated on board of SOFIA since 2011 for more than 150 successful research flights so far. GREAT is a development by the Max Planck Institute for Radio Astronomy and the KOSMA/Universität zu Köln, in cooperation with the DLR Institute for Optical Sensor Systems. The development of GREAT is financed by the participating institutes, by the German Aerospace Center (DLR) and within the Collaborative Research Centre 956, funded by the Deutsche Forschungs¬gemeinschaft (DFG).

NGC 7027: Once low-to-medium mass stars, like our Sun, have depleted their nuclear fuel, much of their mass will be ejected in the form of an expanding gas shell (“planetary nebula”, according to their appearance to early observers), leaving behind a central hot white dwarf. NGC 7027 is a young planetary nebula at a distance of about 3000 light years, in the direction of the constellation Cygnus (the swan). It has a kinematic age of only 600 years, and its ejected shell of about 3 solar masses is still rather compact and dense. The central star is one of the hottest known (190.000 K) and very luminous (10.000 solar luminosities). The hard intense UV radiation field drives ionization fronts into the envelope. It is in this thin ionization front where HeH+ is produced.

Helium Hydride HeH+: The helium hydride ion forms by the reaction of a helium atom, a noble gas, with a proton (ionized hydrogen), the two most abundant elements in the Universe. The positively charged ion is highly reactive, the strongest acid known, and will transfer a proton to absolutely ANY neutral molecule it contacts (the ONLY species it will not react with are other cations). According to the laws of quantum mechanics each molecule emits radiation at defined frequencies that can be calculated and measured in the laboratory. This unique fingerprint allows unambiguous identification by means of spectroscopy. The lowest transition of the rotating HeH+ ion occurs at a frequency of 2010 GHz (or 0.149 mm wavelength).