Witnessing turbulent motion in the atmosphere of a distant star

For the first time, astronomers have succeeded in obtaining a map of the turbulent motions in the atmosphere of a star other than the Sun, thanks to an innovative technique that combines three telescopes at the European Southern Observatory (ESO) on Cerro Paranal located in northern Chile. The astronomer Keiichi Ohnaka at the Universidad Católica del Norte in Antofagasta, Chile, led the research. He and his partners Gerd Weigelt and Karl-Heinz Hofmann from the Max Planck Institute for Radio Astronomy in Bonn, Germany obtained unprecedented velocity-resolved images of the surface and the atmosphere of a distant star.

The results have been published in the actual issue of the journal Nature. 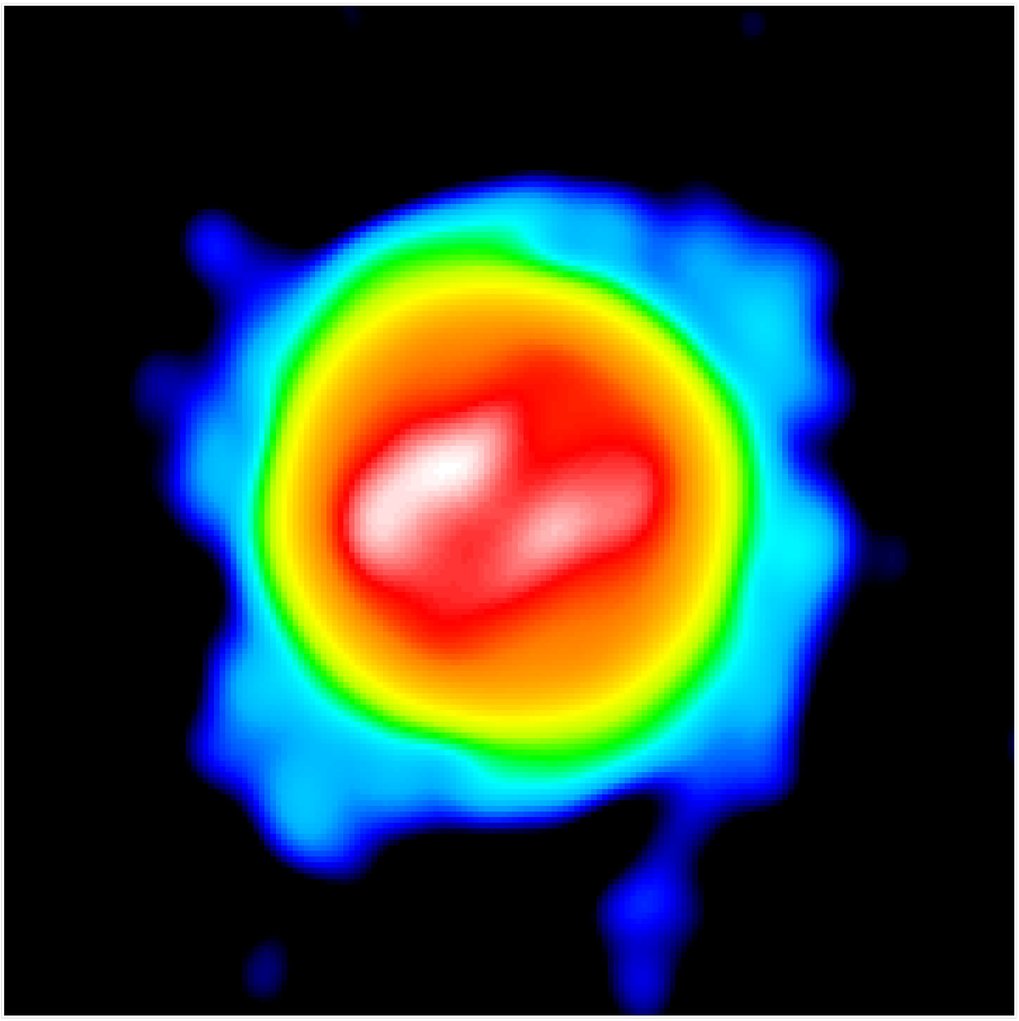 First image of the red supergiant Antares, which shows the stellar disk (yellow) with two brighter regions (white) and ... [more]

The team was able to measure the intensity (Figure 1) and velocity of the gas at each position over the surface and atmosphere of the red supergiant star Antares (Alpha Scorpii) at a distance of about 600 light years. “For the first time, we have succeeded in obtaining a two-dimensional map of the dynamics, that is, the motions in the atmosphere of a star other than the Sun. The observations were performed with ESO’s Very Large Telescope Interferometer (VLTI) and the AMBER beam combiner instrument. The gas velocity can be derived from shifts of spectral lines because of the Doppler effect“, explains Keiichi Ohnaka.

When stars approach the end of their life, they start to lose material from the surface and atmosphere— a process called mass loss. While red supergiant stars like Antares are known to be experiencing intense mass loss, it is still unknown how it occurs—actually a long-standing problem over half a century. One of the best ways to investigate this process is to observe the dynamics of the gas—the motions and the velocity—close to the star. Some images of the surface of stars had been taken before, but only for a very limited number of cases and without information about the gas motions in the atmosphere.

Single telescopes are not able to resolve surface structures on stars other than our Sun. However, if one combines („interferes“) the light from several telescopes, the required high angular resolution can be obtained. This method is called interferometry. “The achievable resolution is proportional to the distance between the individual telescopes”, explains Karl-Heinz Hofmann. “We used the AMBER beam combiner instrument of ESO’s Very Large Telescope Interferometer for our observations because it allows us to perform measurements with high spectral resolution and to measure velocities“.

“If we obtain maps of the gas motions at different heights throughout the atmosphere, we can obtain a three-dimensional picture of how the gas is moving in the atmosphere of stars,” emphasizes Keiichi Ohnaka. The team is already working on such a project, going from 2D to 3D, aiming at finally solving the mystery behind the mass-loss process.

The images of Antares provide new clues for understanding how this star loses mass. The team found out that the material is not spilling out in an ordered manner in Antares but the material is expelled in a random and turbulent manner

“This interferometric imaging method allows us to study not only stars in late evolutionary stages, but also, for example, very young stars surrounded by circumstellar disks, in which planets can form, and even extragalactic objects”, concludes Gerd Weigelt. “In all these projects, it is of greatest importance to obtain both high angular resolution and high spectral resolution to study the velocity distribution in the gas.” In the future, the new VLTI instrument MATISSE will provide a unique opportunity to perform such observations in a wide wavelength range for the first time.