A team of astronomers led by Fatemeh Tabatabaei from the Instituto de Astrofisica de Canarias (IAC), including scientists from two Max Planck institutes (MPIfR, Bonn and MPIA, Heidelberg), has measured the radio emission for a large sample of galaxies with the Effelsberg 100-m radio telescope at different wavelengths. These galaxies were selected from the KINGFISH sample previously observed in the infrared with the Herschel satellite. This allows for the first time a comparative study of a total of 52 spiral galaxies. A reliable method could be established to determine the star formation rate exclusively from radio data without including other spectral regimes. 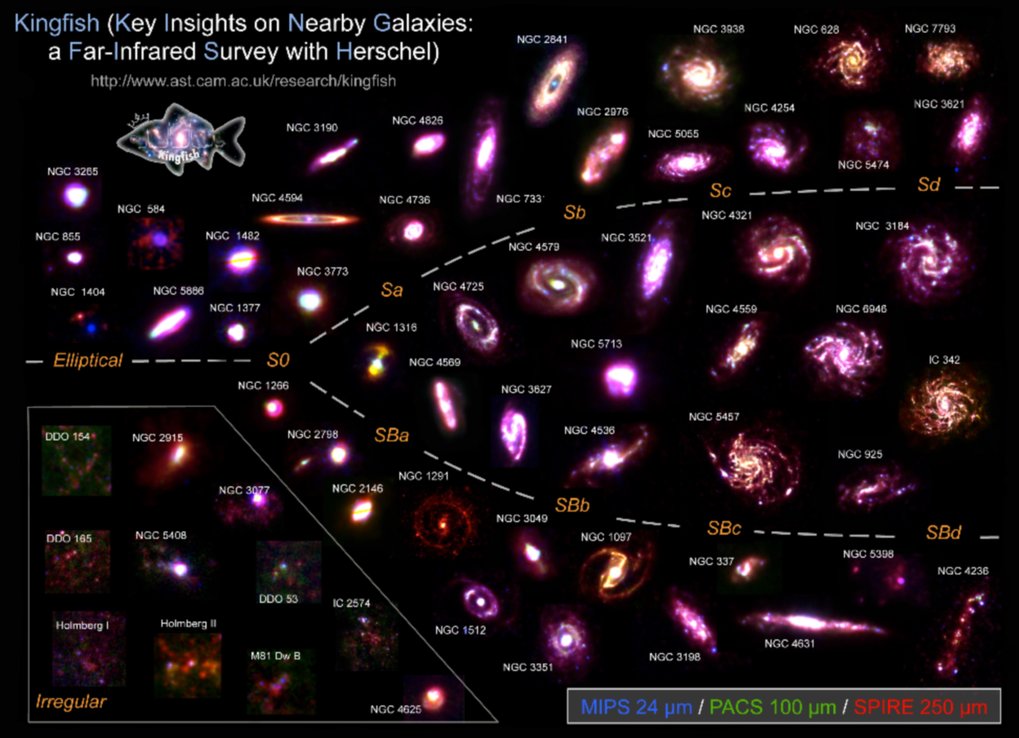 The radio observations were based on the KINGFISH (“Key Insights on Nearby Galaxies: a Far-Infrared Survey with ... [more]

The radio observations were based on the KINGFISH (“Key Insights on Nearby Galaxies: a Far-Infrared Survey with Herschel”) sample of galaxies. The compilation shows composite infrared images of these galaxies created from Spitzer and Herschel observations.

The radio observations were based on the KINGFISH (“Key Insights on Nearby Galaxies: a Far-Infrared Survey with Herschel”) sample of galaxies. The compilation shows composite infrared images of these galaxies created from Spitzer and Herschel observations.

Almost all the light we see in the universe comes from stars which form inside dense clouds of gas in the interstellar medium of galaxies. The rate at which they form (referred to as star formation rate) depends on the reserves of gas and its physical properties like density, temperature, and magnetic field strength. To understand how star formation works, measuring the star formation rate is a key task.

In order to derive the star formation rates, a variety of observations at different wavelengths had been undertaken until now, each with its advantages and disadvantages. The tracers used in the visible and the ultraviolet can be partly absorbed by interstellar dust. This led to the use of hybrid tracers, which combine two or more different wavelength ranges, among them the infrared, which can help to correct for the dust absorption. However, other emissions which are not related to the formation of massive stars can intervene and lead to confusion.

Now, an international research team made a detailed analysis of the spectral energy distribution of a subsample of the KINGFISH galaxies (Fig. 1). The scientists determined for the first time the emitted radio energy which can be used as a tracer to calculate their star formation rates. “We have used the radio emission at intermediate frequencies between 1 and 10 GHz because a tight correlation between the radio and the infrared emission was detected in previous studies, covering a total range of more than four orders of magnitude,” says Fatemeh Tabatabaei from the IAC (La Laguna, Tenerife), the leading author of the study.  In order to improve this relation, more precise studies were needed to understand the energy sources and how radio emission from galaxies is produced.

“We decided within the research group to make studies of galaxies from the KINGFISH sample at a series of radio wavelengths”, recalls Eva Schinnerer from the Max-Planck-Institut für Astronomie (MPIA) in Heidelberg, Germany. The final sample consists of 52 galaxies with very diverse properties. “As a single dish, the 100-m Effelsberg telescope with its high sensitivity is the ideal instrument to receive reliable radio fluxes of weak extended objects like galaxies”, explains Marita Krause from the Max-Planck-Institut für Radioastronomie (MPIfR) in Bonn, Germany, who was in charge of the radio observations of those galaxies with the Effelsberg radio telescope. “We named it the KINGFISHER project, meaning KINGFISH galaxies Emitting in Radio.” Fig. 2 shows the radio emission of one galaxy from the sample (NGC 4725).

The results of this project, published today in The Astrophysical Journal, show that the radio emission over the frequency range used is an ideal tracer for calculating the star formation rate, for several reasons. Firstly, the interstellar dust does not attenuate or absorb radiation at this wavelength; secondly, it is emitted by massive stars during several phases of their formation, from young stellar objects to HII regions (zones of ionized gas) and supernova remnants, and finally, there is no need to combine it with any other tracer. For these reasons, measurements in the chosen range are a more rigorous way to measure the formation rate of massive stars than the tracers traditionally used.

“Now we can apply this method to many more galaxies, using the Effelsberg 100-m telescope”, concludes Rainer Beck from MPIfR, also a co-author of the study. 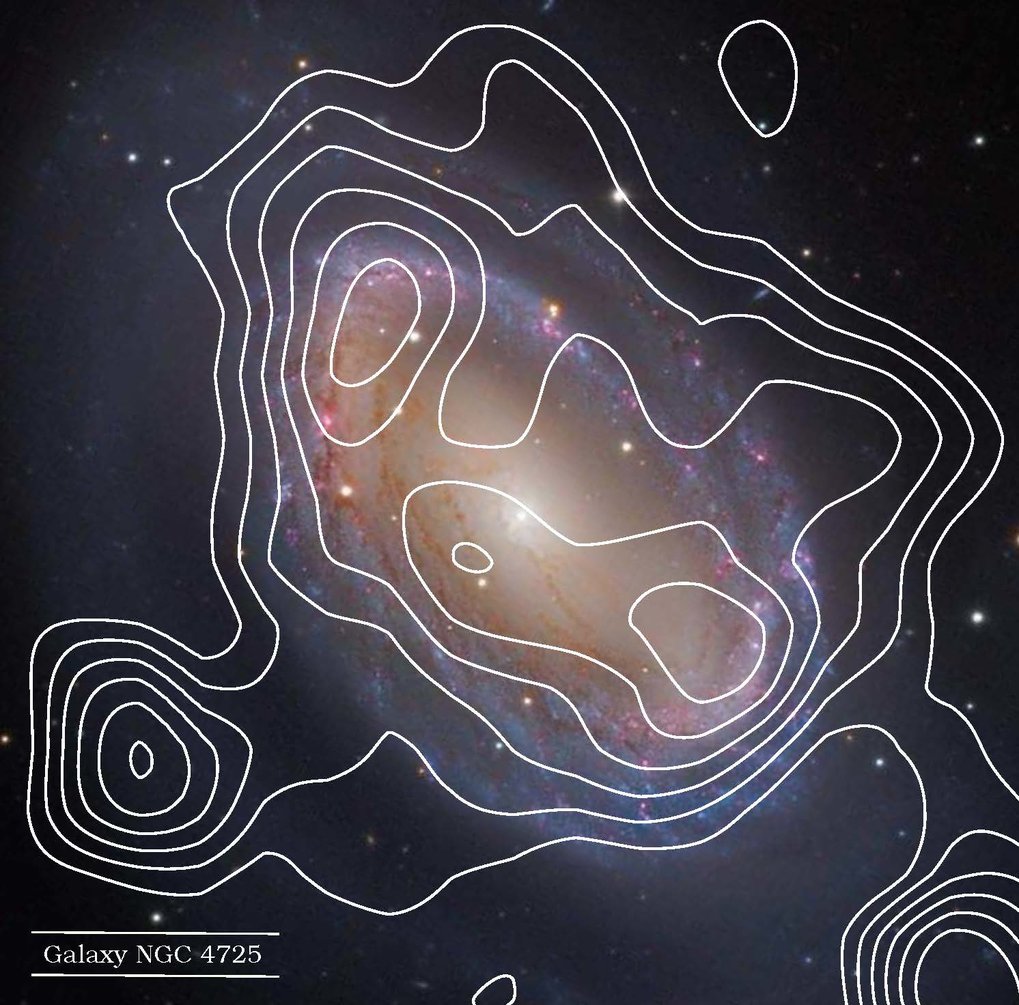 
[less]
Spiral Galaxy NGC 4725. Contour lines of radio continuum emission at a frequency of 8.5 GHz, observed with the Effelsberg 100-m radio telescope, overlayed onto an optical image of the galaxy.

Fatemeh Tabatabaei started to investigate the radio and infrared emission of galaxies as part of her PhD thesis at MPIfR, followed by postdoc positions at MPIfR and MPIA. At present she is a researcher at the Instituto de Astrofisica de Canarias (IAC), La Laguna.

KINGFISH (“Key Insights on Nearby Galaxies: a Far-Infrared Survey with Herschel”) is a survey of 61 galaxies in the Nearby Universe. KINGFISHER (“KINGFISH galaxies Emitting in Radio”) provides a subsample of these galaxies north of -21 degrees declination. For 17 of these galaxies radio data from the Effelsberg 100-m radio telescope at different frequencies did already exist (see “Atlas of Galaxies” web page), 35 galaxies were newly observed with the Effelsberg telescope. Both data sets with a total of 52 galaxies were used for the present study.