A direct localization of a fast radio burst and its host

Astronomers pinpoint radio flashes originating in a far away galaxy

For the first time astronomers have exactly pinpointed the location of a "fast radio burst" - a type of short-duration radio flash of unknown astrophysical origin - and have used this to identify its home galaxy. The galaxy, located over 3 billion light years away, is small, a so-called dwarf galaxy, and very different to our own Milky Way. Also, a persistent, compact radio source is close to the source of the bursts, which provides important insights into its astrophysical origin. The results from an international team, including Laura Spitler from the Max-Planck-Institute for Radio Astronomy in Bonn, Germany, appear today in three publications in Nature and the Astrophysical Journal Letters. 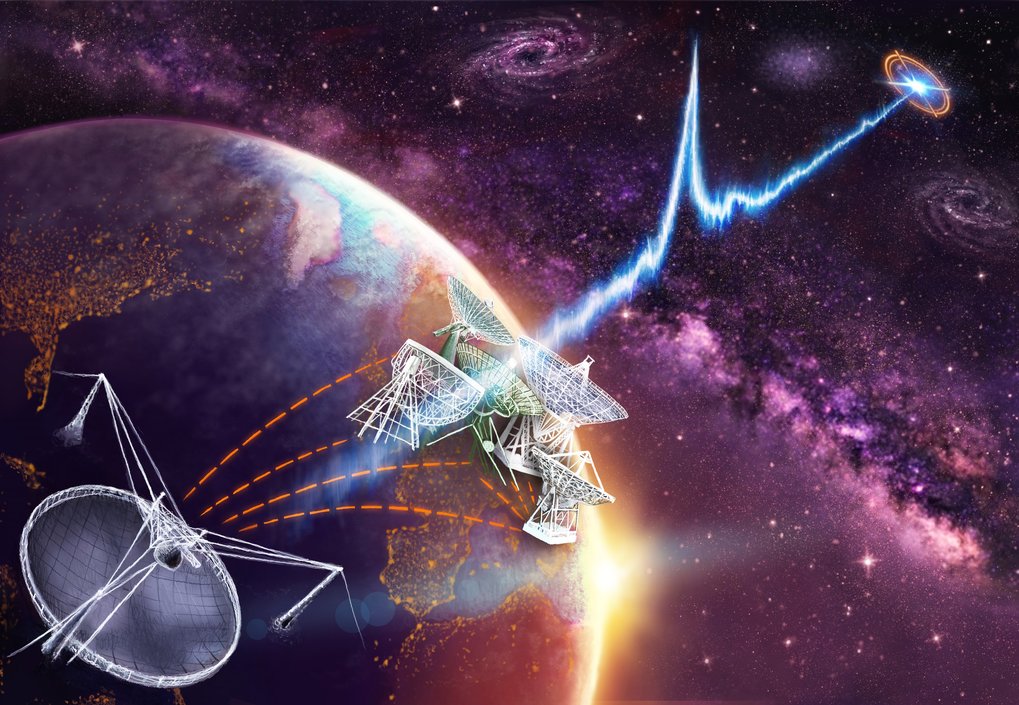 A number of radio telescopes were used within the European VLBI Network (EVN) to observe FRB 121102 (Artist’s impression).

A number of radio telescopes were used within the European VLBI Network (EVN) to observe FRB 121102 (Artist’s impression).

Fast Radio Bursts (FRBs) are visible for only a fraction of a second, and have puzzled astronomers since their discovery a decade ago.  Precise localization of an FRB requires radio telescopes separated by large distances, which allow high resolution images to be made when these telescopes are used in combination with each other. Such follow-up observations were made possible with the first discovery of a repeating source of fast radio bursts, FRB 121102, using the 305-m Arecibo Radio Telescope in Puerto Rico, USA.

Prior to this discovery, astronomers had only indirect evidence that fast radio bursts come from far outside our Milky Way galaxy, because poor localization has prevented them from uniquely identifying their galaxy of origin. The new finding is critical because it has also allowed astronomers to precisely measure the distance to the source, and hence how much energy it is producing.

The Very Large Array in New Mexico, USA detected a total of nine radio bursts from FRB 121102. This determined its sky position to a fraction of an arc second, over 200 times more precise than previous measurements. “Near this position, astronomers found both steady radio and optical sources, which pointed the way to the galaxy hosting the FRB,” says Shami Chatterjee from Cornell University, the first author of the paper in “Nature”.

The team was able to zoom-in on the radio sources with a factor of 10 more precision using the Arecibo Radio Telescope and the European VLBI Network (EVN), which links telescopes spread across the world.  "With a bit of luck, we were able to detect bursts from FRB 121102 with the EVN and now we know that the origin of the bursts is right on top of the persistent radio source", says Benito Marcote from JIVE in the Netherlands.  The 100-m radio telescope in Effelsberg, Germany, is the largest and most sensitive member of the EVN. "Bursts from this source are faint, and Effelsberg played a key role in making this discovery possible," says Laura Spitler, postdoctoral researcher at the Max-Planck-Institute for Radio Astronomy (MPIfR), who discovered FRB 121102.

The team used one of the world's largest optical telescopes, the 8-m Gemini North on Mauna Kea in Hawaii, to discover that the bursts originate from a host galaxy, and use its measured spectrum to obtain a redshift value which places the source at a whopping distance of over 3 billion light-years. "This gives us incontrovertible confirmation that this FRB originates very deep in extragalactic space,” says co-author Cees Bassa (ASTRON). Though the mystery of the FRB’s distance is now solved, astronomers have a new puzzle on their hands. The galaxy hosting the FRB is surprisingly small - a so-called dwarf galaxy.

The fact that FRB 121102 is hosted by a dwarf galaxy may be a vital clue to its physical nature.  Such galaxies contain gas that is relatively pristine compared to that found in the Milky Way.  "The conditions in this dwarf galaxy are such that it may be possible to form much more massive stars than in the Milky Way, and perhaps the source of the FRB bursts is from the collapsed remnant of such a star," suggests co-author Jason Hessels (ASTRON, University of Amsterdam).

Alternatively, astronomers are considering a very different hypothesis in which the FRB bursts are generated in the vicinity of a massive black hole that is swallowing surrounding gas, a so-called active galactic nucleus.

To try and differentiate between these two scenarios, astronomers are continuing to study FRB 121102 using the world's premier radio, optical, X-ray and gamma-ray telescopes.  "For example, if we can find a periodicity to the arrival of the bursts, then we will have strong evidence that it originates from a rotating neutron star", says Laura Spitler.

Deciphering the origin of the FRBs will also depend on localizing more such sources, and astronomers are debating whether all FRBs detected to date are of a similar physical origin or whether there are multiple classes of this new cosmic phenomenon.

The 100-m Effelsberg Radio Telescope of the Max Planck Institute for Radio Astronomy is located in a valley approximately 40 kilometers southwest of Bonn, Germany.

The European VLBI Network (EVN) is a collaboration of the major radio astronomical institutes in Europe, Asia and South Africa and performs high angular resolution observations of cosmic radio sources.

The 305-m William E. Gordon Telescope of the Arecibo Observatory is located close to Arecibo in Puerto Rico, USA.

The Karl G. Jansky Very Large Array consists of 27 radio antennas in a Y-shaped configuration on the Plains of San Agustin fifty miles west of Socorro, New Mexico, USA. Each antenna is 25 meters (82 feet) in diameter.