LOFAR, the low-frequency array radio telescope, normally receives weak radio waves from the distant universe. But now and then an ultra-short, bright radio pulse is observed somewhere in between AM and FM radio frequencies. This radio blast would appear as a short cracking sound in your car radio. While usually ignored, this radio signal is actually the last SOS of an elementary particle entering the Earth atmosphere at almost the speed of light. The particles were fired off by a cosmic accelerator Millions of year ago.

An international team of astronomers including a number of scientists from the German Long Wavelength consortium (GLOW) have now unraveled the radio code of these intruders to determine their nature and constrain their origin.

Their results are published in today’s edition of Nature. 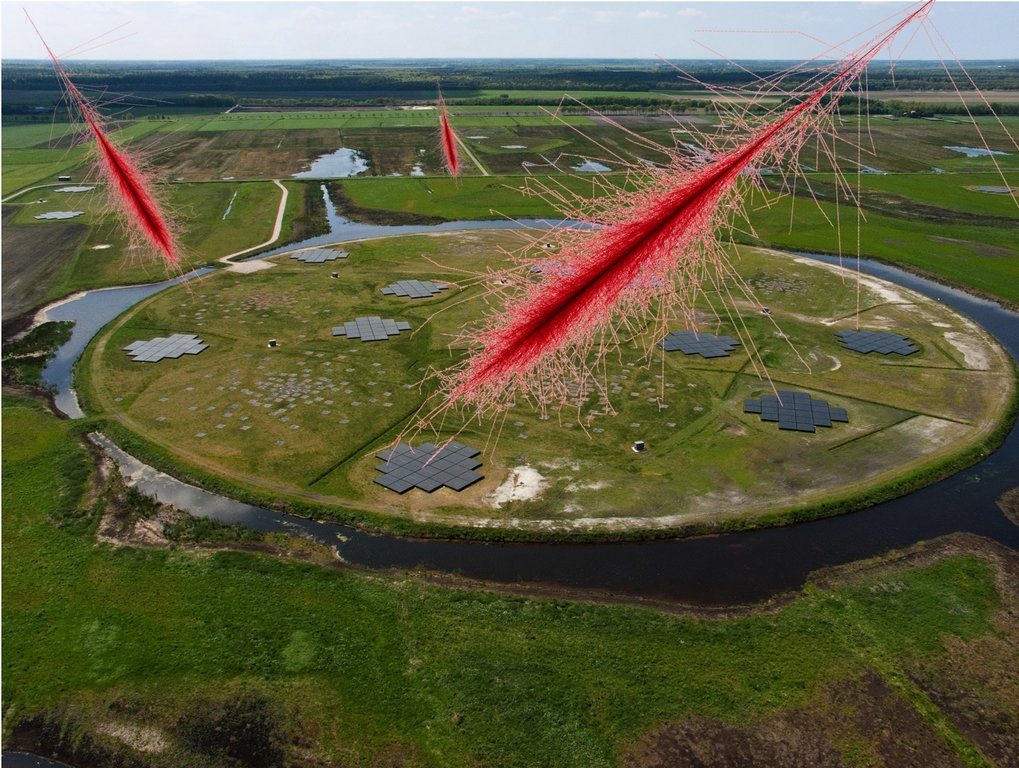 Image of air showers, simulated with CORSIKA, mounted onto a photo of the central station (“superterp”) of the LOFAR ... [more]

Image of air showers, simulated with CORSIKA, mounted onto a photo of the central station (“superterp”) of the LOFAR telescope network near Exloo/Netherlands.

Image of air showers, simulated with CORSIKA, mounted onto a photo of the central station (“superterp”) of the LOFAR telescope network near Exloo/Netherlands.

Supernova explosions, dying stars, black holes. All these phenomena have been named as sources of cosmic ray particles. But until now nobody really knows the origin. Cosmic ray particles are elementary particles that travel through the universe with an energy that is a million times bigger than in the largest particle accelerator on earth. With almost the speed of light, they collide like bullets with the atmosphere, before falling apart into a cascade of secondary particles. Their interaction with the Earth’s magnetic field leads to an extremely short radio signal, no longer than one billionth of a second. Thousands of LOFAR antennas help to find the signal and measure it accurately.

Finding the signal is one thing, knowing what caused it is another. For the first time astronomers now succeeded in calculating and modelling what kind of particle came in. “We can now identify the bullet,” says Heino Falcke from Radboud University in the Netherlands, the chair of the International LOFAR Telescope board who also pioneered this new technique. “In most cases the bullet turns out to be a single proton or the light nucleus of a helium atom.”

“Because of the enormous energy, most astrophysicists assume that cosmic particles originate deep in the universe, like black holes in other galaxies”, adds Stijn Buitink from the Vrije Universiteit Brussel, the first author of the Nature paper. “But we think they come from a nearby source and get their energy from a cosmic accelerator in the Milky Way – perhaps a very massive star.”

The sources of cosmic particles are cosmic accelerators, up to a million times stronger than the Large Hadron Collider (LHC) in Geneva or any conceivable man-made accelerator for that matter. “These particles come to Earth anyway, so we only have to find them”, says Heino Falcke who is affiliated with the Max Planck Institute for Radio Astronomy (MPIfR) in Bonn, Germany. “We can now do high energy physics with simple FM radio antennas.”  This opens up a new window to the high-energy universe and high-precision measurement of cosmic particles.

"The main difference to ordinary FM radios is in the digital electronics and the broad-band receivers which allow us to measure a large number of frequencies simultaneously at high speed“, explains Andreas Horneffer from MPIfR who built the antennas of a pre-cursor of the present experiment, LOPES (“LOFAR Prototype Experimental Station”) as part of his PhD project.

The particle identification from the radio measurements relies on exact knowledge of the radio emission physics. The LOFAR data are compared with simulations made with the CoREAS code developed by Tim Huege and his colleagues at Karlsruhe Institute of Technology (KIT) in the framework of the CORSIKA air shower simulation program. "When we started the radio signal simulations ten years ago and compared with data of our LOPES experiment, the physics of the radio emission was a big puzzle. Today, the simulations can reproduce even the high-quality LOFAR data in great detail, and could therefore be used to interpret the measurements with confidence." says Tim Huege. 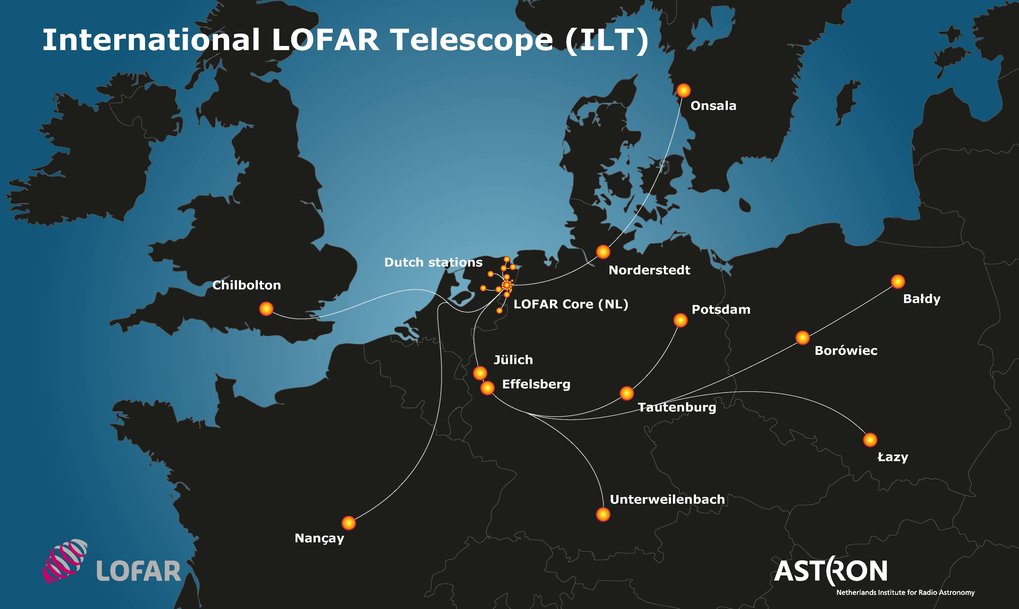 European antenna stations of the International LOFAR Telescope (ILT). The core station is near Exloo in the Netherlands; ... [more]

Cosmic ray detection with LOFAR has opened the door to precise measurements that help unravel the sources of these highest energy particles. The future Square Kilometre Array (SKA) with its very high density of antennas is expected to unleash the full potential of radio detection of cosmic rays with even higher measurement precision than achieved with LOFAR.

“It is a remarkable experience having particle physicists and radio astronomers working together to realize such a successful experiment in the rising new field of astro-particle physics”, concludes Ralf-Jürgen Dettmar from Ruhr-Universität Bochum, the chairman of the German GLOW consortium.

The International LOFAR Telescope (ILT) was originally planned by ASTRON in the Netherlands, together with a number of European partner countries. The LOFAR telescope network is made for radio observations in the meter wavelengths regime. At present it comprises 38 stations in the Netherlands, 6 stations in Germany, 3 in Poland and one each in the UK, Sweden and France. Each station consists of hundreds of dipole antennas which are electronically connected and thus form a virtual radio telescope across an area half the size of Europe.

The German Long Wavelength Consortium (GLOW) was formed 2006 by German universities and research institutes to foster the use of the radio spectral window at meter wavelengths for astrophysical research. German researchers study for instance the evolution of galaxy clusters, magnetic fields in the intergalactic medium, the nature and evolution of pulsars, and solar outbursts.