With the first detailed observations of a lava lake on a moon of Jupiter, the Large Binocular Telescope Observatory in Arizona places itself as the forerunner of the next generation of Extremely Large Telescopes. The applied high-resolution imaging methods were developed by an international research team including scientists from the Max Planck Institute for Radio Astronomy in Bonn and the Max Planck Institute for Astronomy in Heidelberg. 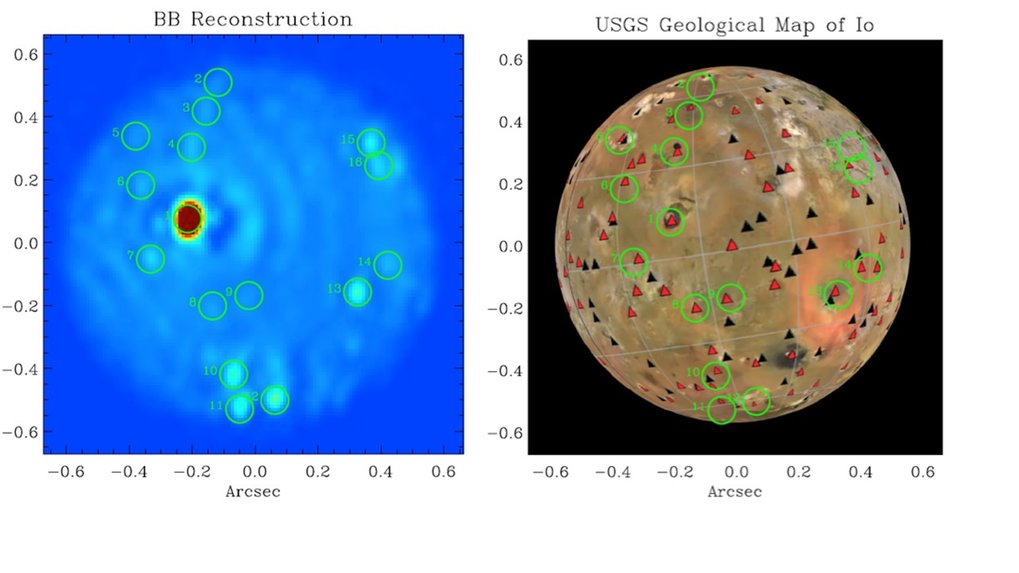 Jupiter’s moon Io seen by LBT on 2013 December 24 (left) compared to a satellite image based on NASA’s Voyager 1 and 2 and Galileo missions (right). The Loki lava lake shows up as dark red region on the LBT image. The circles mark the volcanos showing up in the LBT image.

Jupiter’s moon Io seen by LBT on 2013 December 24 (left) compared to a satellite image based on NASA’s Voyager 1 and 2 and Galileo missions (right). The Loki lava lake shows up as dark red region on the LBT image. The circles mark the volcanos showing up in the LBT image.

Io, the innermost of the four moons of Jupiter discovered by Galileo in January 1610, is only slightly bigger than our own Moon but is the most geologically active body in our solar system. Hundreds of volcanic areas dot its surface, which is mostly covered with sulfur and sulfur dioxide.

The largest of these volcanic features, named Loki after the Norse god often associated with fire and chaos, is a volcanic depression called patera in which the denser lava crust solidifying on top of a lava lake episodically sinks in the lake, yielding a raise in the thermal emission which has been regularly observed from Earth. Loki, only 200km in diameter and at least 600 million km from Earth, was, up to recently, too small to be looked at in details from any ground based optical/infrared telescope.

With its two 8.4 m mirrors set on the same mount 6 m apart, the Large Binocular Telescope (LBT) has been designed to ultimately provide images with the level of details a 22.8 m telescope would, by combining the light through interferometry. Thanks to the Large Binocular Telescope Interferometer (LBTI), an international team of researchers was able to look at Loki Patera in details for the first time from Earth in a study published today in the Astronomical Journal.

"We combine the light from two very large mirrors coherently so that they become a single, extremely large mirror,” says Al Conrad, the lead of the study and a Scientist at the Large Binocular Telescope Observatory (LBTO).  “In this way, for the first time we can measure the brightness coming from different regions within the lake."

For Phil Hinz, who leads the LBTI project at the University of Arizona Steward Observatory, this result is the outcome of a nearly fifteen year development. "We built LBTI to form extremely sharp images. It is gratifying to see the system work so well."  Phil notes that this is only one of the unique aspects of LBTI.  "We built the system both to form sharp images and to detect dust and planets around nearby stars at extremely high dynamic range. The new result from LBTI is a great example of its potential." 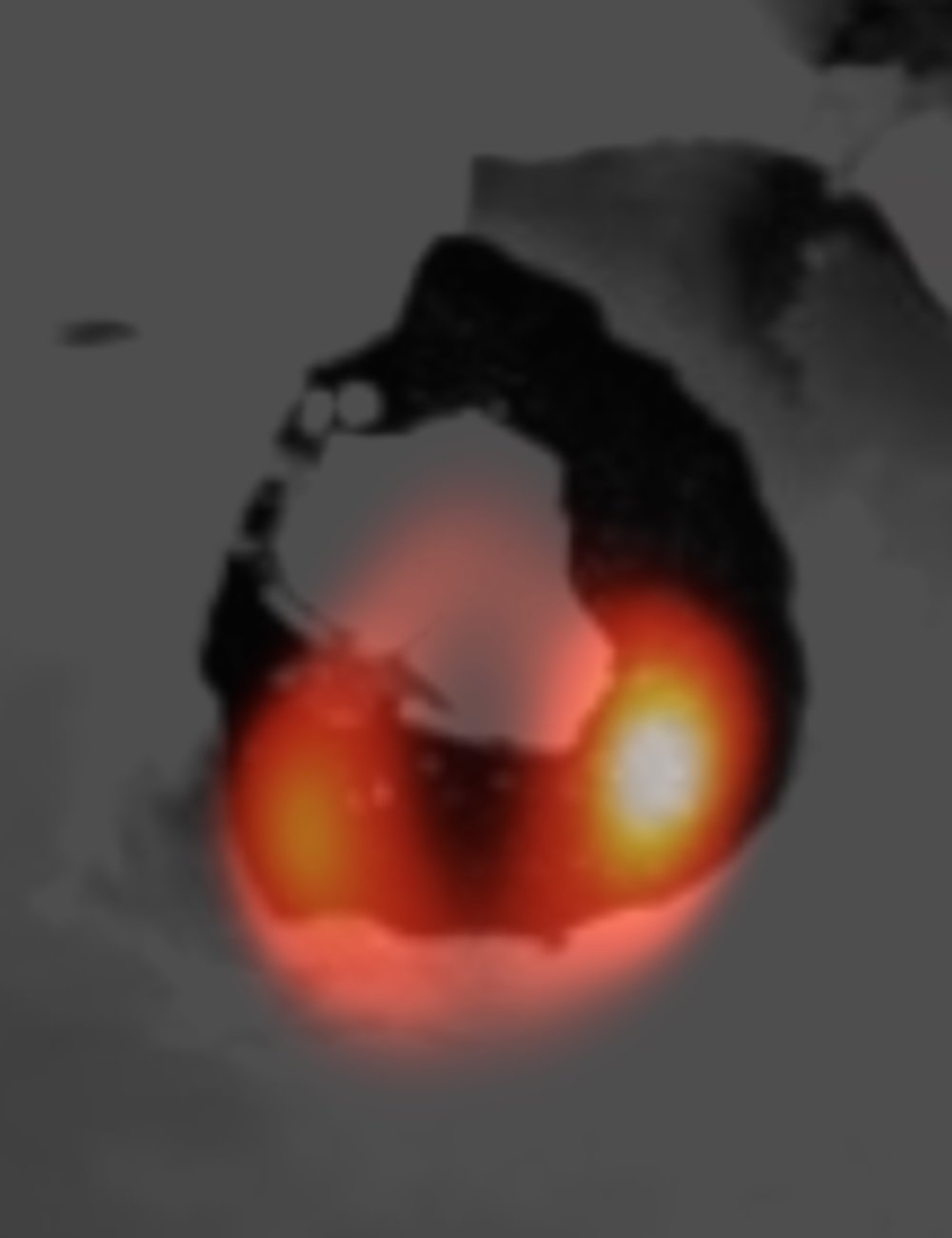 LMIRcam, the camera recording the images at the very heart of LBTI in the 3 to 5 micrometers near-infrared band, was the thesis work of Jarron Leisenring as graduate student at the University of Virginia. For Jarron, now an instrument scientist for NIRCam (the Near InfraRed CAMera for the James Webb Space Telescope) at Steward Observatory, "these observations mark a major milestone for me and the instrument team. LMIRcam has already been very productive these past few years; now, interferometric combination provides the last step in harnessing LBTI’s full potential and enabling a whole host of new scientific opportunities."

Many raw images delivered by LMIRcam are combined to form a single high-resolution image. "LBTI raw images are crossed by interference fringes. Therefore, these raw images do not look very sharp", explains Gerd Weigelt, a Professor at the Max-Planck-Institut für Radioastronomie  in Bonn, Germany. "However, modern image reconstruction methods, so-called deconvolution, allow us to overcome the interference fringes and achieve a spectacular image resolution.”

"Data processing based on deconvolution methods", adds Mario Bertero, a professor in Information Science at the University of Genova (Italy), "are basic for detecting details not directly distinguishable in the  interferometric images. However they can generate artifacts and, for this reason, it is important to process the images with different methods for discriminating between relevant details and artifacts."

"While we have seen bright emissions – always one unresolved spot – “pop-up” at different locations in Loki Patera over the years”, explains Imke de Pater, a Professor at the University of California in Berkeley, "these exquisite images from the LBTI show for the first time in ground based images that emissions arise simultaneously from different sites in Loki Patera. This strongly suggests that the horseshoe-shaped feature is most likely an active overturning lava lake, as hypothesized in the past.”

"Two of the volcanic features are at newly-active locations", explains Katherine de Kleer, a graduate student at the University of California at Berkeley. "They are located in a region called the Colchis Regio, where an enormous eruption took place just a few months earlier, and may represent the aftermath of that eruption. The high resolution of the LBTI allows us to resolve the residual activity in this region into specific active sites, which could be lava flows or nearby eruptions."

"Studying the very dynamic volcanic activity on Io, which is constantly reshaping the moon's surface, provides clues to the interior structure and plumbing of this moon," remarked team member Chick Woodward of the University of Minnesota. "It helps to pave the way for future NASA missions such as the Io Observer. Io's highly elliptical orbit close to Jupiter is constantly tidally stressing the moon, like the squeezing of a ripe orange, where the juice can escape through cracks in the peel."

For Christian Veillet, Director of the Large Binocular Telescope Observatory (LBTO), "this study marks a very important milestone for the Observatory. The unique feature of the binocular design of the telescope, originally proposed more than 25 years ago, is its ability to provide images with the level of detail (resolution) only a single-aperture telescope at least 22.7m in diameter could reach. The spectacular observations of Io published today are a tribute to the many who believed in the LBT concept and worked very hard over more than two decades to reach this milestone."

Veillet adds: "While there is still much work ahead to make the LBT/LBTI combination a fully operational instrument, we can safely state that the Large Binocular Telescope is truly a forerunner of the next generation of Extremely Large Telescopes slated to see first light in a decade (or more) from now." 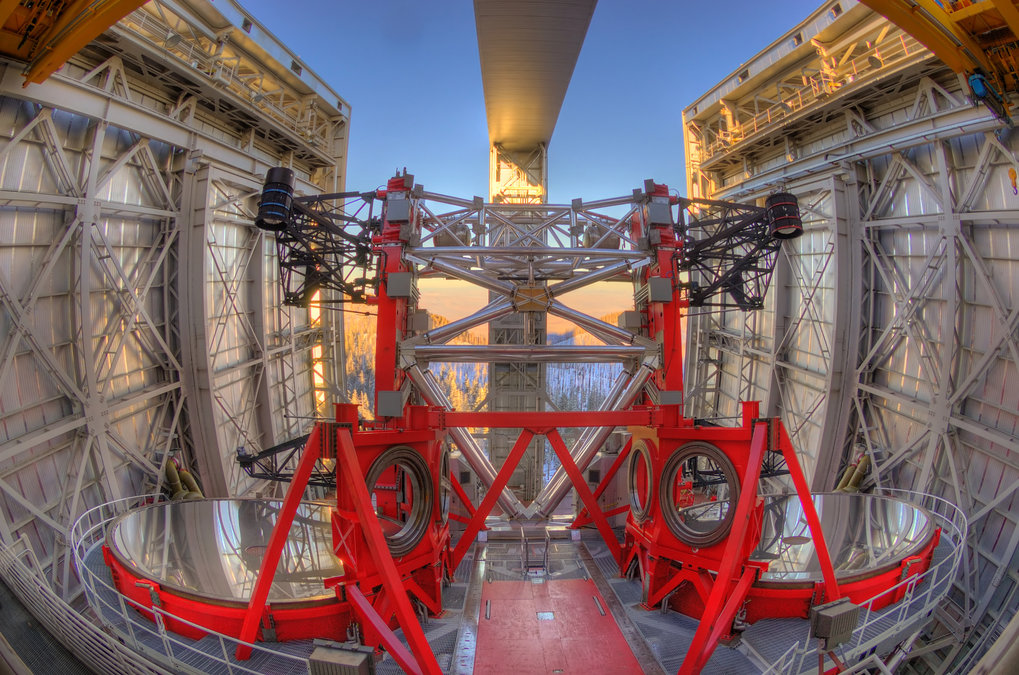 The Large Binocular Telescope (LBT) is composed of two 8.4 m diameter mirrors on a common mount. By combining the light ... [more]

The Large Binocular Telescope (LBT) is composed of two 8.4 m diameter mirrors on a common mount. By combining the light through interferometry, the LBT provides the resolution of a 22.8 m telescope.

The Large Binocular Telescope (LBT) is composed of two 8.4 m diameter mirrors on a common mount. By combining the light through interferometry, the LBT provides the resolution of a 22.8 m telescope.