Swirling Electrons in the Whirlpool Galaxy

The whirlpool galaxy Messier 51 (M51) is seen from a distance of approximately 30 million light years. This galaxy appears almost face-on and displays a beautiful system of spiral arms.
A European team of astronomers was able to observe M51 with the International LOFAR Telescope in the frequency range 115-175 MHz, just above the normal commercial FM radio frequency band of 88-108 MHz. The team obtained the most sensitive image of any galaxy at frequencies below 1 GHz so far.
With LOFAR's high sensitivity, the disk of M51 in the radio regime could be traced much further out than before. The astronomers detected cosmic electrons and magnetic fields 40,000 light years away from the center of M51. With LOFAR’s high angular resolution, the spiral arms are clearly visible. Magnetic fields and cosmic rays are densest in spiral arms. Compared to higher radio frequencies, spiral arms appear broader due to the diffusion of cosmic electrons away from the spiral arms where they have been formed. 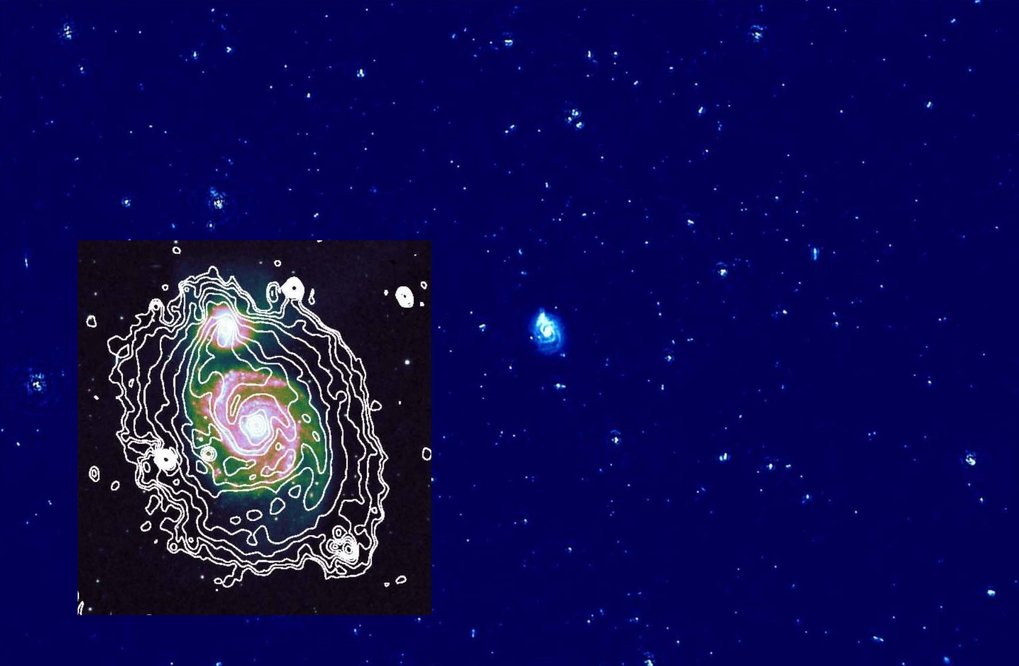 LOFAR radio map of the whirlpool galaxy M51 and its neighbourhood at a frequency of 150 MHz. The field covers 4 by 2.6 degrees. The observations were performed with the Dutch LOFAR high-band antennas. The map shows the distribution of hot electrons in M51 and also a large number of background galaxies.The inlay shows an enlarged view of M51 at 150 MHz (white contour lines) overlayed onto an optical image of M51 from the Digital Sky Survey (DSS).

LOFAR radio map of the whirlpool galaxy M51 and its neighbourhood at a frequency of 150 MHz. The field covers 4 by 2.6 degrees. The observations were performed with the Dutch LOFAR high-band antennas. The map shows the distribution of hot electrons in M51 and also a large number of background galaxies.The inlay shows an enlarged view of M51 at 150 MHz (white contour lines) overlayed onto an optical image of M51 from the Digital Sky Survey (DSS).

The view of galaxies in the radio regime is different to their optical appearance. Whereas optical images show predominantly the visible light from stars, the radio waves unravel two constituents of galaxies that are invisible to optical telescopes: electrons, almost as fast as light, and magnetic fields. Their role for the stability and evolution of galaxies is increasingly under discussion. The electrons are "cosmic ray" particles produced in the shock fronts of giant supernova explosions. Magnetic fields are generated by dynamo processes driven by gas motions. When the electrons spiral around the magnetic field lines, radio waves are emitted, a process called synchrotron emission. Its intensity increases with the number and energy of the electrons and with magnetic field strength.

For many decades, radio astronomy has been unable to explore low frequencies below 300 MHz because the ionosphere acts as a barrier of low-frequency radio waves (which are completely blocked below about 10 MHz). Sophisticated methods of data processing and superfast computers are needed to recover the emission. Due to these technical challenges, spiral galaxies have hardly been studied before at these very low radio frequencies. The only observations were of poor resolution and no details could be made out.

The target of investigation in David Mulcahy’s PhD project was the beautiful spiral galaxy Messier 51 at a distance of about 30 million light years which is visible already in a small telescope in the constellation “Canes Venatici”, not far away from the famous Big Dipper (in German: “Großer Wagen”) in the sky.

“Low-frequency radio waves are important as they carry information about electrons of relatively low energies that are able to propagate further away from their places of origin in the star-forming spiral arms and are able to illuminate the magnetic fields in the outer parts of galaxies”, says David Mulcahy. “We need to know whether magnetic fields are expelled from galaxies and what their strength is out there.”

"This beautiful image, coupled with the important scientific result it represents, illustrates the fantastic advances that can be made at low radio frequencies with the LOFAR telescope”, continues Anna Scaife from Southampton University, co-author of the paper. “Unravelling the mysteries of magnetic fields is crucial to understanding how our Universe works. For too long, many of the big questions about magnetic fields have simply been untestable and this new era of radio astronomy is very exciting."

The Low Frequency Array (LOFAR), designed and constructed by ASTRON in the Netherlands, is a brand new radio telescope giving access to very low radio frequencies. 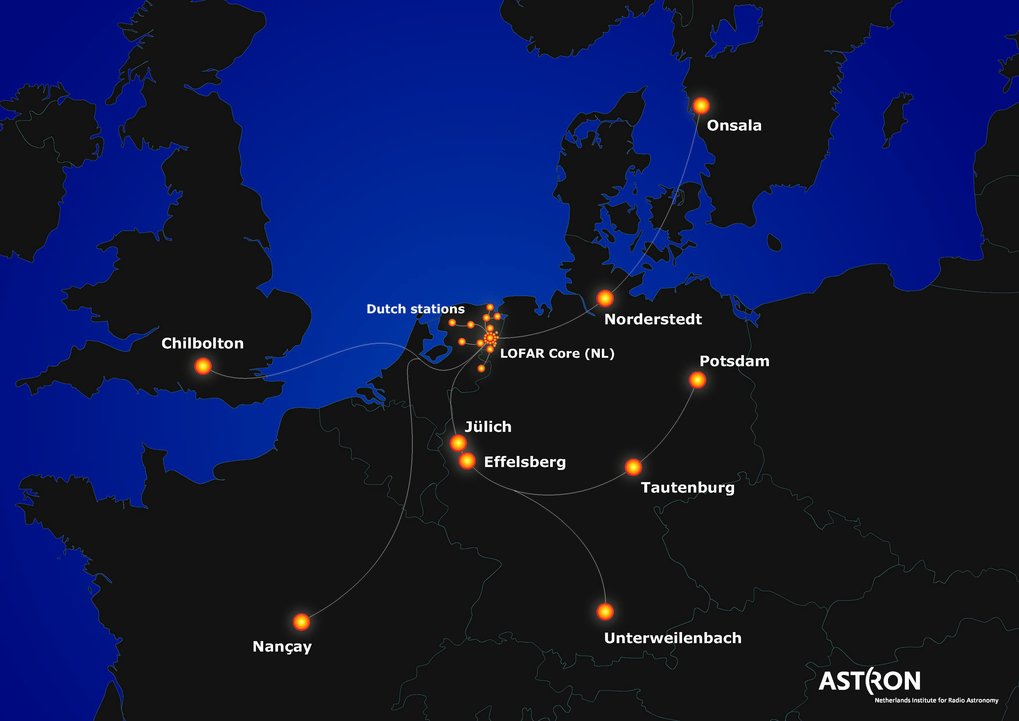 LOFAR explores the relatively unexplored frequency range below 240 MHz and consists of a multitude of small and simple antennas without moving parts. LOFAR consists of 38 stations in the Netherlands, 6 stations in Germany and one station each in the UK, France and Sweden. The novelty is the online combination of the signals from all stations in a powerful computing cluster located at the University of Groningen (Netherlands).

Observations of M51 with LOFAR below FM radio frequencies (at 30-80 MHz) have already taken place. „This opens a new window to the Universe where we do not know how galaxies will look like“, concludes Rainer Beck, who supervised David Mulcahy’s PhD project. „Maybe we will see how galaxies are magnetically connected to intergalactic space. This is a key experiment in preparation for the planned Square Kilometre Array (SKA) that should tell us how cosmic magnetic fields are generated.“