Cold Gas in the Andromeda Galaxy

A new radio frequency map of the Andromeda galaxy has been made by a German-French research team of the Max Planck Institute for Radio Astronomy (MPIfR) in Bonn and the Institut de Radioastronomie Millimétrique (IRAM) in Grenoble. The map shows the first detailed distribution of cold gas in a neighbouring galaxy, revealing the sites where new stars are born. The motions of this gas were also obtained. With more than 800 hours of telescope time this study is one of the most extensive observational projects in millimetre radio astronomy (Astronomy & Astrophysics, Vol. 453 No. 2, July II 2006). 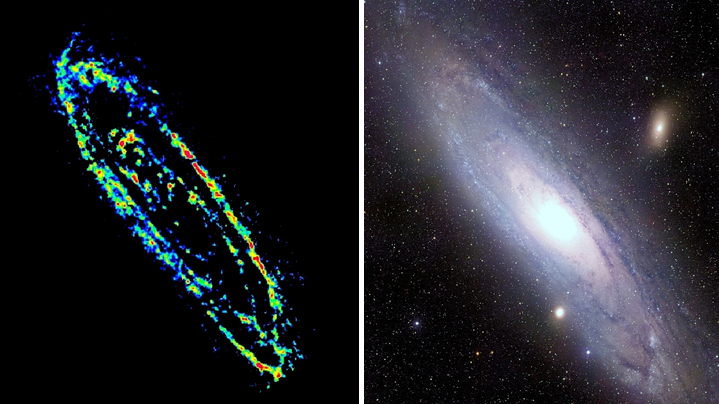 How are stars formed? This is one of the most important questions in astronomy. We know that star formation takes place in cold gas clouds with temperatures below -220 C (50 K). Only in these regions of dense gas can gravitation lead to a collapse and hence to star formation. Cold gas clouds in galaxies are composed preferentially of molecular hydrogen, H2 (two hydrogen atoms bound as one molecule). This molecule emits a weak spectral line in the infrared bandwidth of the spectrum that cannot be observed by Earth-based telescopes because the atmosphere absorbs this radiation. Therefore, astronomers study another molecule which is always found in the neighbourhood of H2, namely carbon monoxide, CO. The intense spectral line of CO at the wavelength of 2.6 mm can be observed with radio telescopes that are placed on atmospherically favourable sites: high and dry mountains, in the desert or at the South Pole. In cosmic space carbon monoxide is an indicator of conditions favourable for the formation of new stars and planets.

In our galaxy, the Milky Way, studies of the distribution of carbon monoxide have been carried out for a long time. Astronomers find enough cold gas for star formation during millions of years to come. But many questions are unanswered; for instance how this raw material of molecular gas comes to exist in the first place. Is it supplied by the early development stage of the Galaxy, or can it be formed from warmer atomic gas? Can a molecular cloud collapse spontaneously or does it need an action from outside to make it unstable and collapse? Since the Sun is located in the disk of the Milky Way it is very difficult to obtain an overview of the processes taking place in our Galaxy. Looking from "outside" would help and so too does a look at our cosmic neighbours.

The Andromeda galaxy, also known under its catalogue number M31, is a system of billions of stars, similar to our Milky Way. The distance of M31 is 'only' 2.5 million light years, making it the nearest spiral galaxy The galaxy extends over some 5 degrees in the sky and can be seen with the naked eye as a tiny diffuse cloud. Studies of this cosmic neighbour can help to understand processes in our own Galaxy. Unfortunately, we are seeing the disk of gas and stars in M31 nearly edge-on (see Fig. 1, right).

In 1995 a team of radio astronomers at the Institut de Radioastronomie Millimétrique (IRAM) in Grenoble (Michel Guélin, Hans Ungerechts, Robert Lucas) and at the Max Planck Institute for Radio Astronomy (MPIfR) in Bonn (Christoph Nieten, Nikolaus Neininger, Elly Berkhuijsen, Rainer Beck, Richard Wielebinski) started the ambitious project of mapping the entire Andromeda galaxie in the carbon monoxide spectral line. The instrument used for this project was the 30-meter radio telescope of IRAM which is situated on Pico Veleta (2970 metres) near Granada in Spain. With an angular resolution of 23 arcseconds (at the observing frequency of 115 GHz = wavelength of 2.6 mm) 1.5 million individual positions had to be measured. To speed up the observing process a new method of measurement was used. Rather than observing at each position, the radio telescope was driven in strips across the galaxy with continuous recording of the data. This observing method, called 'on the fly', was especially developed for the M31 project; it is now standard practice, not only at the Pico Veleta radio telescope but also at other telescopes observing at millimeter wavelengths.

For each observed position in M31 not just one value of CO intensity was recorded, but 256 values simultaneously across the spectrum with a bandwidth of 0.2% of the central wavelength of 2.6 mm. Thus the complete observational data set consists of some 400 million numbers! The exact position of the CO line in the spectrum gives us information about the velocity of the cold gas. If the gas is moving towards us, then the line is shifted to shorter wavelengths. When the source moves away from us, then we see a shift to longer wavelengths. This is the same effect (the Doppler effect) that we can hear when an ambulance’s siren moves towards us or away from us. In astronomy the Doppler effect allows the motions of gas clouds to be studied; even clouds with different velocities seen in the same line of sight can be distinguished. If the spectral line is broad, then the cloud may be expanding or else it consists of several clouds at different velocities.

The observations were finished in 2001. With more than 800 hours of telescope time this is one of the largest observing projects carried out with the telescopes of IRAM or MPIfR. After extensive processing and analysis of the huge quantities of data, the complete distribution of the cold gas in M31 has just been published (see Fig. 1, left).

The cold gas in M31 is concentrated in very filigree structures in the spiral arms. The CO line appears well suited to trace the spiral arm structure. The distinctive spiral arms are seen at distances between 25,000 and 40,000 light years from the centre of Andromeda, where most of the star formation occurs. In the central regions, where the bulk of older stars are located, the CO arms are much weaker. As a result of the high inclination of M31 relative to the line of sight (about 78 degrees) the spiral arms seem to form a large, elliptical ring with a major axis of 2 degrees. In fact, for a long time Andromeda was taken, mistakenly, to be a 'ring'-galaxy.

The map of the gas velocities (see Fig. 2) resembles a snap shot of a giant fire wheel. On the one side (in the south, left) the CO gas is moving with some 500 km/second towards us (blue), but on the other side (north, right) with 'only' 100 km/second (red). Since the Andromeda galaxy is moving towards us with a velocity of about 300 km/second, it will closely pass the Milky Way in about 2 billion years. In addition, M31 is rotating with about 200 km/second around its central axis. Since the inner CO clouds are moving on a shorter path than the outer clouds, they can overtake each other. This leads to a spiral structure.

The ring of star formation ('birth zone') in our own Milky Way, extending from 10,000 to 20,000 light years from the centre, is smaller than in M31. In spite of this, it contains nearly 10 times as much molecular gas (see table in Appendix). As all galaxies are about the same age, the Milky Way has been more economical with its raw material. On the other hand, the many old stars near the centre of M31 indicate that in the past the star formation rate was much higher than at present: here most of the gas has already been processed. The new CO map shows us that Andromeda was very effective in forming stars in the past. In some billions of years from now our Milky Way may look similar to Andromeda now.