A source, in which a single spectral line has a more than thousandfold higher luminosity than our Sun at all wavelengths, has been found at the center of a radio galaxy. Intense maser emission from water vapor arises from the near vicinity of a giant Black Hole. During an extensive search for such objects, Andrea Tarchi and Marco Chiaberge of the Institute of Radioastronomy of the Italian CNR and Christian Henkel and Karl Menten of the Max-Planck-Institut für Radiostronomie (MPIfR) in Bonn detected for the first time such emission in a "classical" radio galaxy, in which a massive central Black Hole with a mass of many million times that of the sun is the central engine powering the observed radio emission which spreads out over hundreds of thousands of light years.

Christian Henkel, Andrea Tarchi and their collaborators have been conducting an intensive search for "water megamasers" in the immediate vicinity of active galactic nuclei which are thought to be powered by a massive (as much as a billion times the mass of the sun) black hole. Such water masers form in the accretion disk surrounding the black hole and faithfully trace the kinematics of the disk thus allowing a valuable estimate of the black hole mass. The achievement of Tarchi et al. has been to detect maser emission toward a radio-loud galaxy, the "X-shaped" radio source 3C 403. (see Fig. 1). This is the most distant megamaser yet discovered. Due to the expansion of the universe, 3C 403 and the Milky Way move away from each other with a velocity of more than 17000 km/s! Although the overall properties of radio-quiet and radio-loud active galaxies do differ, it is believed that similar physical processes are at work in the vicinity of the Black Hole. In particular, the current paradigm of research on active galactic nuclei is, that they are surrounded by dense accretion disks or tori, largely consisting of dust and molecules. A serious problem with this has been the failure to detect molecules in such accretion disks. A reason may be the compactness of the emitting region, producing little "normal" emission. Masers, on the other hand are due to an amplification process, which makes them detectable even at hugh distances. To date the only direct evidence for molecular disks around Black Holes is from maser emission. 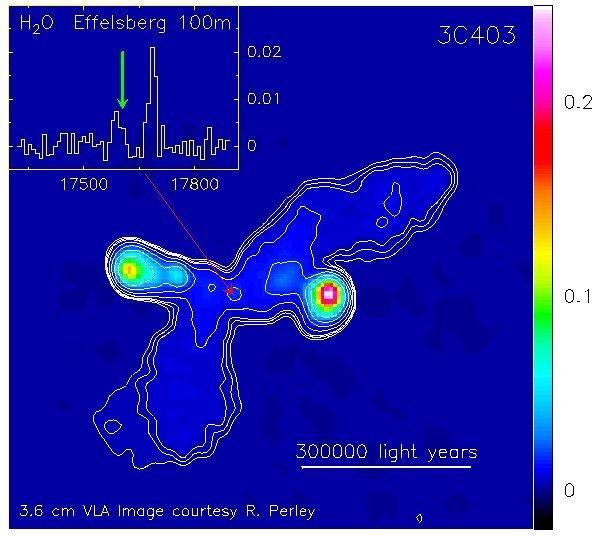 The observed Doppler velocities bracket the systemic (recession) velocity of 3C 403, as would be expected for a circumnuclear origin. However, a final verdict on the nature of the emission has to await VLBI measurements, which would presently be extremely difficult due to the weakness of the emission. On the other hand, such maser emission is known to be variable and with luck, one might catch the source during an outbreak, making VLBI observations feasible. Such observations would be extremely valuable, potentially providing the most detailed information possible on the monster within. "With this discovery we enter a whole new ball game", Menten says, "we just have to observe it again and again, until it's strong enough for VLBI. Then we'll grab it!"

Giant Radio Galaxies are the largest single structures in the universe. The subclass of the active galaxies shows strong emission at radio wavelengths. The appearance of typical radio galaxies is dominated by two lobes of emission extending away from each other in opposite directions with a compact radio source (the nucleus) at their center. The observed continuum radiation is named synchrotron emission as it was first detected on Earth in elementary particle accelerators ("synchrotons") and is produced by electrons spiraling around magnetic field lines. The lobes are giant structures, frequently spreading over many hundred thousands or even millions of light years into intergalactic space. When the size and radio power of the first such objects was measured, scientists realized that only the conversion of gravitational energy released when matter falls into the deep potential well of a supermassive Black Hole could possibly create such energies. Even the extremely efficient process of nuclear fusion, which keeps stars such as our Sun shining for billions of years, does not appear to be a viable process.

Black Holes form when matter is compressed to such a small volume that nothing, not even light, can escape its gravitational pull. Over the last decades evidence for cosmic Black Holes has been gathered by a variety of techniques and it turns out that Black Holes come in basically two varieties: A stellar-mass Black Hole forms when a high-mass star (with a mass larger than 8 times our sun's mass) explodes as a supernova, blowing most of its matter into interstellar space, while a remnant collapses due to its own gravity. In contrast, massive Black Holes reside at the very center of most, if not all, galaxies, have masses of several hundred thousands to many millions or even billions of solar masses and, as recent evidence shows, probably form in the early universe at the same time as the first stars of a galaxy.

Black Holes swallow matter from their vicinity, which forms so-called accretion disks around them. Matter in the inner portions of these disks heats due to its own friction as it spirals toward the hole. Somehow (and theoreticans don't yet know how exactly) some of this matter gets accelerated to velocities close to the speed of light and collimated into so-called jets by magnetic fields. In the case of supermassive Black Holes, these jets finally deposit their energy into intergalactic space, usually up to several hundred thousands of light years away from their origin.

Being the engines of activity in galactic nuclei, massive Black Holes are of central importance for most of astrophysics. A basic parameter, whose knowledge is necessary to understand their evolution and the relationship to their host galaxy, is a Black Hole's mass. As Johannes Kepler found out in the seventeenth century for our solar system, masses in space orbit each other on elliptical paths. Isaac Newton's later discovery of the law of gravitation gave an explanation for this and also a prescription for determining the masses from observations of their velocities relative to each other.

How can one measure velocities of material in the immediate vicinity of a massive Black Hole? One way is to observe spectral lines at X-ray wavelengths, which probe extremely (millions of degrees) hot material from the innermost region of the accretion disk. In contrast to continuum emission, whose intensity varies smoothly with wavelength, spectral lines are emitted from all atoms and molecules of a gas at certain, discrete frequencies. These are well known from laboratory measurements and allow identification of the emitting material. "In addition, their relative intensities probe the material's density and temperature. Moreover, lines emitted by moving sources experience a Doppler shift; lines from gas moving away from us are shifted to longer, in the case of visual light, redder, wavelengths, while lines from gas moving toward us are blue-shifted. The emission from faraway objects is also redshifted because the universe is expanding" explains Christian Henkel.

One of the strongest molecular emission lines in the radio range is the water line near a wavelength of 1.3 cm, one of the first radio lines discovered, in 1969, in the interstellar medium of our Milky Way. This line can easily be observed, due to its, in some sources extremely strong, emission, which is amplified by a natural maser effect. A maser (Microwave Amplification by Stimulated Emission of Radiation) is the radio wavelength equivalent of a laser. In our own Galaxy many hundreds of H2O maser sources have been found in dense, hot interstellar gas either in the immediate vicinity of young or very old stars. The strongest galactic masers radiate the equivalent of our sun's luminosity in a single spectral line! Nevertheless, only the strongest H2O masers in our Milky Way would be detectable even in our nearest neighbour spiral galaxy, Andromeda, which is at a distance of two million lightyears.

Thus it came as a big surprise when in the early 1980s relatively strong H2O maser emission was detected toward the active galactic nuclei of a number of much more distant galaxies. Because of their enormous line luminosities, up to thousands of suns, these sources were soon named "megamasers" and the name stuck. Among the first researchers to study these objects, K. Y. Lo and M. Claussen (now at the US National Radio Astronomy Observatory, NRAO; K .Y. Lo as its director) concluded that this maser emission must arise from the innermost region around the nucleus, very close to the central Black Hole. This was later confirmed by Very Long Baseline Interferometry (VLBI). [In a VLBI experiment the signals from telescopes far apart, even on different continents, are combined to achieve the angular resolution of a telescope with the diameter of several thousand kilometers.]

More recently, VLBI measurements revealed that H2O megamasers fall into one of two classes. Most arise from the innermost part of the accretion disk around the central engine, while a few others are located in interaction zones of the jets and ambient interstellar material. Model calculations show that both environments can provide conditions conducive to H2O maser excitation. Both classes have in common that the maser host galaxies are named "radio-quiet", i.e, show comparatively little radio continuum emission. VLBI observations of one of the former sources, NGC4258, involving the Effelsberg 100m telescope, showed that the emission indeed arises from a disk seen edge on. Moreover, plotting the Doppler velocities of individual maser cloudlets vs. sky position revealed the exact signature of Keplerian rotation. By measuring the dimensions of the masing disk and considering the measured Doppler velocities as well their rate of change over the years, it was possible to determine the central mass, which turned out to be 39+/-1 million solar masses, and even the distance to the source, allowing an independent measure of the Hubble constant and, thus, the age and scale of our universe.

These observations triggered renewed interest in searches for megamasers. With its huge collecting area the MPIfR's Effelsberg 100m radio telecope has over the years played a central role in these efforts. These observations require large amounts of observing time, since emission is ofteny rather weak and many sources must be searched, often repeatedly because of variability. However, the tenacity of Christian Henkel, who spearheads the MPIfR effort, has paid off nicely: "I have never seen such huge amounts of water in my whole life." To date a total of 31 H2O megamasers have been discovered, more than half of them with the 100m telescope.