Countries involved in the Square Kilometre Array (SKA) Project have come together in Rome today for the signature of the international treaty establishing the intergovernmental organisation (IGO) that will oversee the delivery of the world’s largest radio telescope. The German radio astronomy community is interested in a participation within the SKA project and is collaborating in predecessor activities such as the new MeerKAT telescope in South Africa. 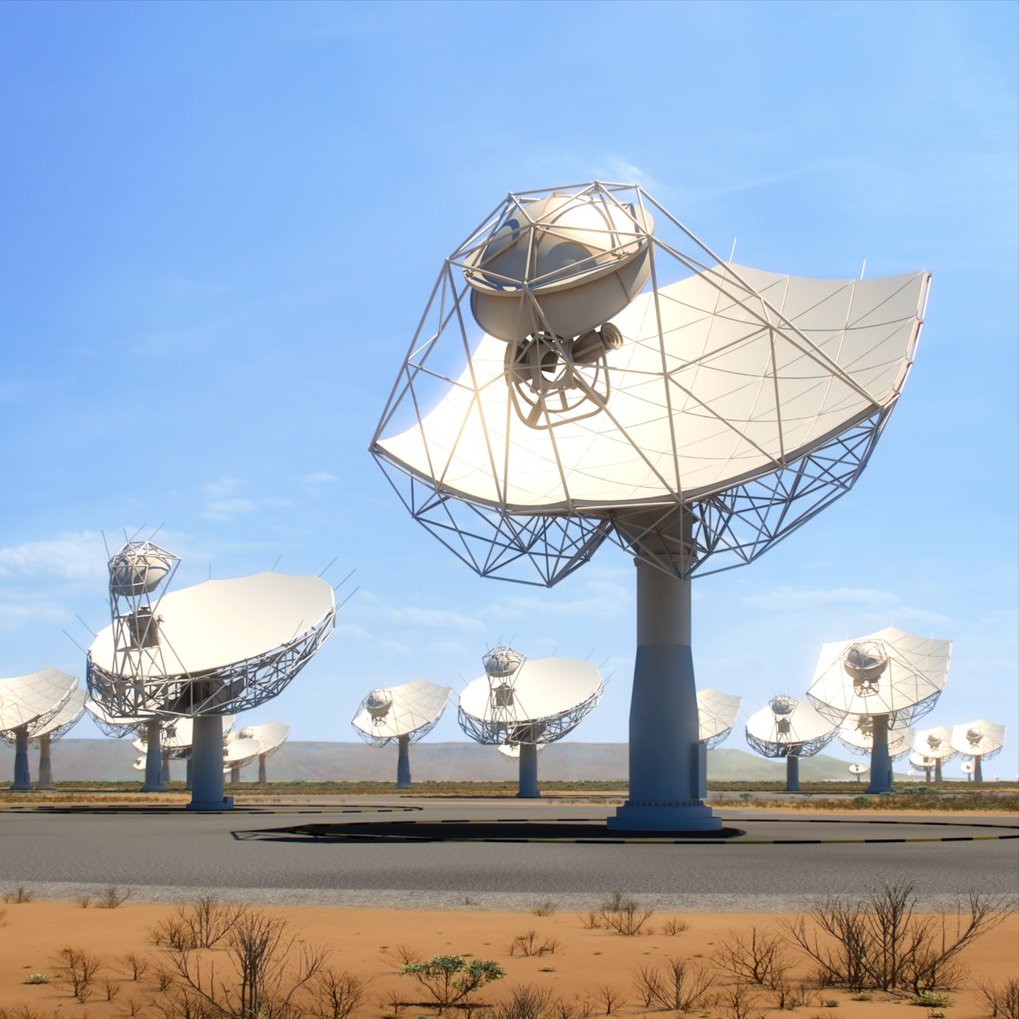 Artists rendition of the SKA-mid dishes in Africa. Such dish telescopes will work towards the upper range of radio ... [more]

Artists rendition of the SKA-mid dishes in Africa. Such dish telescopes will work towards the upper range of radio frequencies of the SKA.

Artists rendition of the SKA-mid dishes in Africa. Such dish telescopes will work towards the upper range of radio frequencies of the SKA.

Ministers, Ambassadors and other high-level representatives from over 15 countries have gathered in the Italian capital for the signature of the treaty establishing the Square Kilometre Array Observatory (SKAO) as intergovernmental organisation tasked with delivering and operating the SKA.

“Rome wasn’t built in a day. Likewise, designing, building and operating the world’s biggest telescope takes decades of efforts, expertise, innovation, perseverance, and global collaboration. Today we’ve laid the foundations that will enable us to make the SKA a reality”, says Dr. Catherine Cesarsky, Chair of the SKA Board of Directors.

The SKA will be the largest science facility on the planet, with infrastructure spread across three continents on both hemispheres. Its two networks of hundreds of dishes and thousands of antennas will be distributed over hundreds of kilometres in Australia and South Africa,  with the Headquarters in the United Kingdom.

„There is a only small number of cornerstone physics machines in the 21st century“, states Michael Kramer, the head of MPIfR‘s „Fundamental Physics in Radio Astronomy“ research department in Bonn, Germany. „The SKA will join facilities like the James Webb Space Telescope, CERN’s Large Hadron Collider, and also the LIGO/VIRGO gravitational wave detector and the new generation of massive optical telescopes.“

The world’s fastest supercomputers will be needed to process the unprecedented amounts of data emanating from the telescopes, with some 600 petabytes expected to be stored and distributed worldwide to the science community every year, or the equivalent of over half a million laptops worth of data.

Close to 700 million euros worth of contracts for the construction of the SKA will start to be awarded from late 2020 to companies and providers in the SKA’s member countries, providing a substantial return on investment for those countries. Spinoffs are also expected to emerge from work to design and build the SKA, with startups already being created out of some of the design work and impact reaching far beyond astronomy.

Over 1,000 engineers and scientists in 20 countries have been involved in designing the SKA over the past five years, with new research programmes, educational initiatives and collaborations being created in various countries to train the next generation of scientists and engineers.

The German community was involved in the development of the project since the 1990s. This continued with the prototype antenna for the mid-frequency range of the SKA, which was designed by German industry and recently deployed to South Africa by the Max-Planck Society (MPG) The community, supported also by the German Ministry of Education and Science, contributes to the scientific exploration of MeerKAT and the SKA/MPG prototype antenna.

The „Denkschrift 2017: Perspektiven der Astrophysik in Deutschland 2017-2030“ is the German equivalent to the US Decadal Survey. „As summarized in our Denkschrift, German astronomers have declared the German participation in the construction of the SKA as one of their top priorities next to participation in ESO-ELT and ALMA“, says Joachim Wambsganss from Zentrum für Astronomie at Heidelberg University (ZAH), chairman of the Council of German Observatories.

Seven countries signed the treaty today, including Australia, China, Italy, The Netherlands, Portugal, South Africa and the United Kingdom. India and Sweden, who also took part in the multilateral negotiations to set up the SKA Observatory IGO, will now have one year to sign the treaty. Together, these nine countries will form the founding members of the new organisation.

The signature concludes three and a half years of negotiations by government representatives and international lawyers, and kicks off the legislative process in the signing countries, which will see SKAO enter into force once five countries including all three host countries have ratified the treaty through their respective legislatures

In addition to the scientific exploration, the German community has a particular interest in the big data aspect. For this reason, German partners are in the process of forming the „Verein für datenintensive Radioastronomie“. Partner institutions include, among others, HTW Berlin, Universität Bielefeld, Universität Bonn, Hochschule Bonn-Rhein-Sieg, TU Dortmund, Universität Hamburg, ZAH at Universität Heidelberg, Sternwarte Tautenburg, Universität Würzburg, and the Max Planck Society.

„The entire astronomical community has long anticipated a radio observatory with breakthrough performance in the Southern hemisphere. Establishing the organisation that shall build and operate the new facilities is a significant step forward. German astrophysicists are eager to contribute to the SKA which will offer insights to the universe far beyond the capabilities of todays' facilities“, concludes Stefan Wagner, also from ZAH.