The Discovery of 8 New Millisecond Pulsars

A group of astronomers, led by the Italian National Institute of Astrophysics (INAF) and the Max Planck Institute for Radio Astronomy (MPIfR) in Bonn, Germany, has discovered 8 millisecond pulsars located within dense clusters of stars, known as “globular clusters”, using South Africa’s MeerKAT radio telescope. Millisecond pulsars are neutron stars, the most compact star known, that spin up to 700 times per second. This result comes from the synergic work of two international collaborations, TRAPUM and MeerTIME, with the findings detailed in a Monthly Notices of the Royal Astronomical Society paper published today. 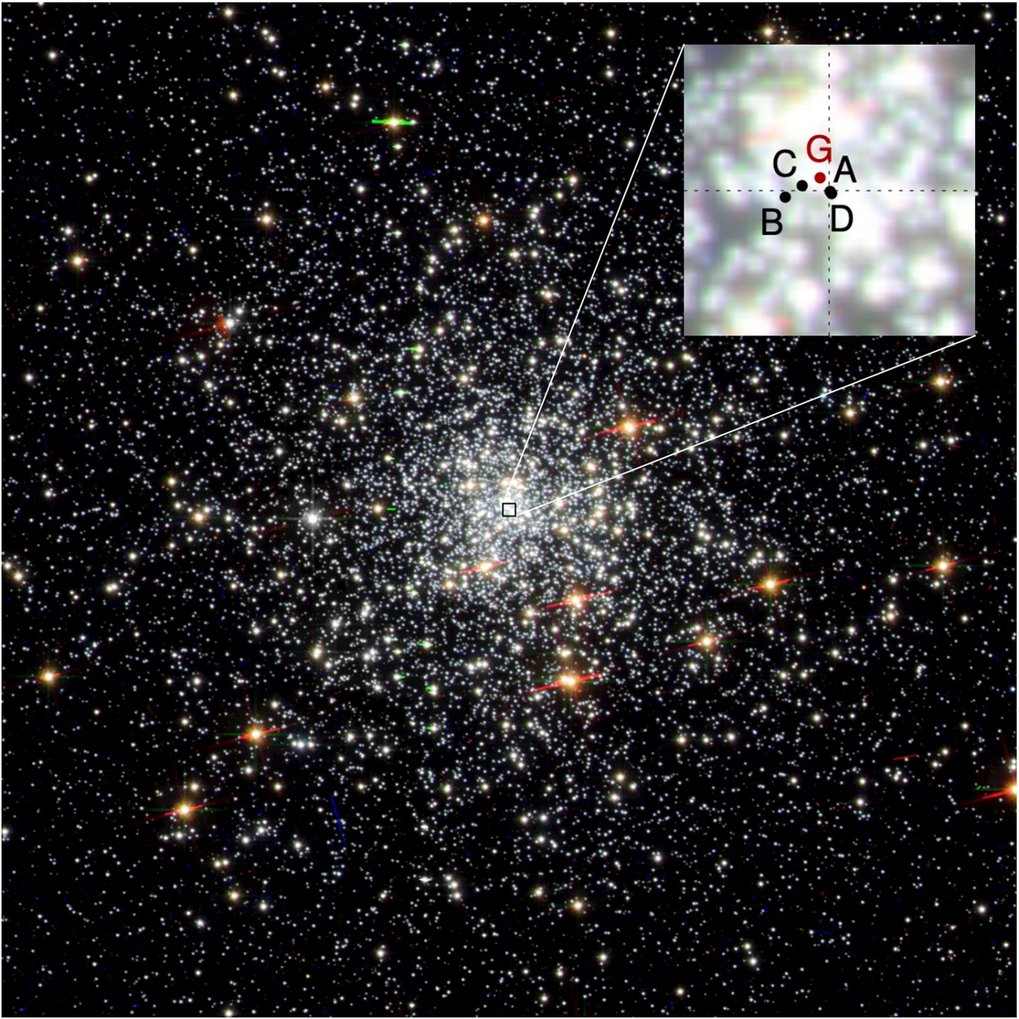 The globular cluster NGC 6624 was captured by the NASA/ESA Hubble Space Telescope. Some of the pulsars hosted by the ... [more]

The globular cluster NGC 6624 was captured by the NASA/ESA Hubble Space Telescope. Some of the pulsars hosted by the cluster have been highlighted in the inset: in red, the new pulsar PSR J1823-3021G, found by MeerKAT. The cluster NGC 6624 is located in the constellation of Sagittarius at just under 8000 light-years from the Sun.

The globular cluster NGC 6624 was captured by the NASA/ESA Hubble Space Telescope. Some of the pulsars hosted by the cluster have been highlighted in the inset: in red, the new pulsar PSR J1823-3021G, found by MeerKAT. The cluster NGC 6624 is located in the constellation of Sagittarius at just under 8000 light-years from the Sun.

Millisecond pulsars are extremely compact stars mainly made up of neutrons, and are amongst the most extreme objects in the universe: they pack hundreds of thousands of times the mass of the Earth in a sphere with a diameter of about 24 km; they spin at a rate of hundreds of rotations per second. They emit a beam of radio waves that hits the observer at every rotation, like a lighthouse. The formation of these objects is highly enhanced in the star-rich environments at the centres of globular clusters.

“We directed the MeerKAT antennas toward 9 globular clusters, and we discovered new pulsars in 6 of them”, says the lead author, Alessandro Ridolfi, a post-doctoral research fellow at INAF and MPIfR. Five of these new pulsars orbit around another star, and one of these, named PSR J1823-3021G, is particularly interesting: “Because of its highly elliptical orbit, and massive companion, this system is likely the result of an exchange of partners: following a 'close encounter': the original partner was expelled and replaced by a new companion star”, continues Ridolfi.

Tasha Gautam, doctoral researcher at the MPIfR in Bonn and co-author of the paper, explains: “This particular pulsar could have a high mass, more than 2 times the mass of the Sun, or it could be the first confirmed system formed by a millisecond pulsar and a neutron star. If confirmed by current additional observations, this would make this millisecond pulsar a formidable laboratory for studying fundamental physics.”

The 8 new pulsars are just the tip of the iceberg: the observations that led to their discovery used only about 40 of the 64 MeerKAT antennas and focused only on the central regions of the globular clusters.

"The MeerKAT radio telescope is a huge technological step forward for the research and the study of pulsars in the southern sky”, says Andrea Possenti from INAF, coordinator of pulsar observations in globular clusters for the MeerTIME collaboration. “In the next few years, MeerKAT is expected to find dozens of new millisecond pulsars, giving us a foretaste of what will then happen with the advent of the mid-frequency antennas of the SKA Observatory, which will revolutionize many fields of astrophysics, including the study of pulsars.”

Ridolfi, Gautam and Possenti are members of the TRAnsients and PUlsars with MeerKAT (TRAPUM) collaboration, a Large Survey Proposal with a broad international collaboration of astronomers excited by the possibilities opened up by MeerKAT.  For this particular work, they shared telescope time with a second Large Survey Proposal for MeerKAT, MeerTIME, which is using MeerKAT to study already known pulsars with unprecedented precision.

This work served as a testbed for the TRAPUM collaboration to better plan the fully-fledged globular cluster pulsar survey, which is currently underway and which makes use of all the current 64 dishes (thus further gaining in sensitivity). The survey will broaden the search to many more globular clusters, and will also survev their outer regions.

"Past surveys for pulsars in globular clusters have discovered bizarre and extreme binary pulsars. Hopefully, with new instruments like MeerKAT we will discover even more extreme systems that can teach us more about the basic laws of our Universe”, concludes Paulo Freire, also a co-author from the MPIfR. 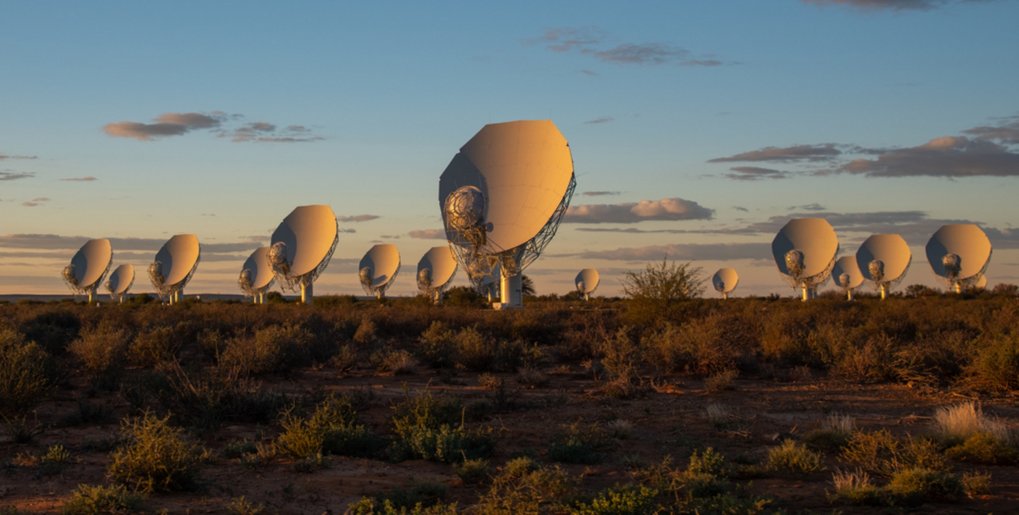 14 of the 64 radio dishes of the MeerKAT telescope array in the Karoo desert in South Africa.

14 of the 64 radio dishes of the MeerKAT telescope array in the Karoo desert in South Africa.

Operated by the South African Radio Astronomy Observatory (SARAO), MeerKAT is the largest radio telescope in the Southern hemisphere and one of two Square Kilometre Array Observatory (SKAO) precursor instruments, based in South Africa. Located in the Karoo desert, the radio telescope will soon be expanded with an additional 20 dishes, bringing the total number of antennas up to 84 and becoming “MeerKAT+”. This will later be gradually integrated into the first phase of the SKAO project, whose construction is about to begin and will continue until 2027. The first scientific observations of MeerKAT+ could begin as early as 2023, during the testing phases of the telescope.

MeerTIME is also a Large Survey Proposal running on MeerKAT, led by the Swinburne University of Technology, and integrating several Australian institutions as well as INAF, University of Manchester, MPIfR, NRAO and SARAO.