Something is Lurking in the Heart of Quasar 3C 279

One year ago the Event Horizon Telescope (EHT) Collaboration published the first image of a black hole in the nearby radio galaxy M 87. Now the collaboration has extracted new information from the EHT data of the far quasar 3C 279: they observed the finest detail ever in the relativistic jet that is believed to originate from the vicinity of a supermassive black hole. In their analysis, which was led by astronomer Jae-Young Kim from the Max Planck Institute for Radio Astronomy in Bonn, they studied the jet’s fine-scale morphology close to the jet base where highly variable gamma-ray emission is thought to originate. The technique used for observing the jet is called very long baseline interferometry (VLBI). Much of the development of VLBI was led by the Radio Astronomy/VLBI-division of the Max Planck Institute for Radio Astronomy.

The results are published in the coming issue of „Astronomy & Astrophysics“ on April 7th, 2020. 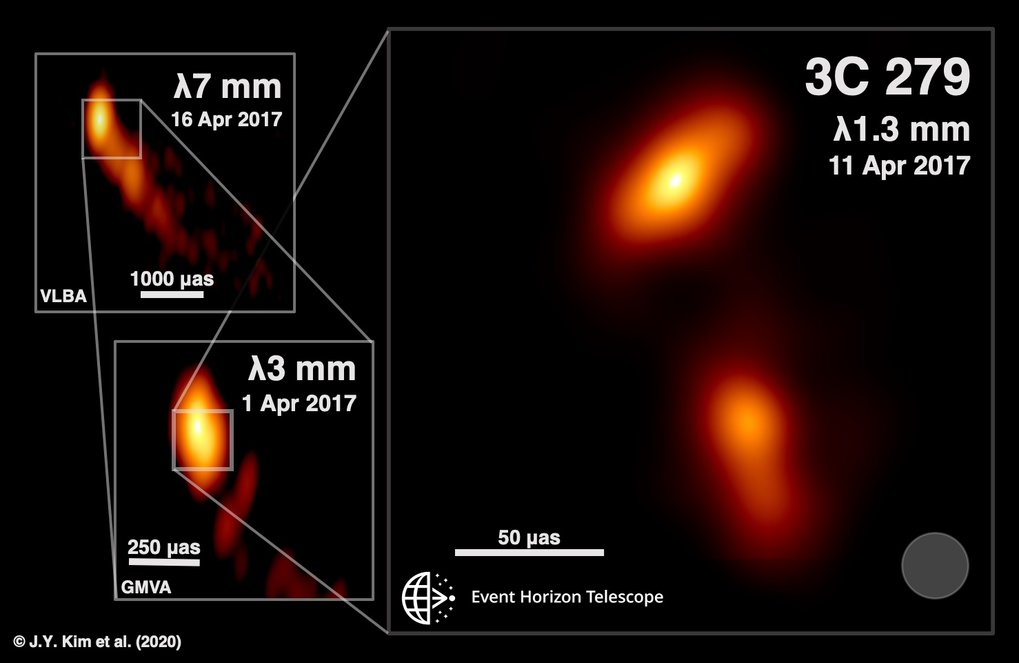 Illustration of multiwavelength 3C 279 jet structure in April 2017. The observing epochs, arrays, and wavelengths are ... [more]

Illustration of multiwavelength 3C 279 jet structure in April 2017. The observing epochs, arrays, and wavelengths are noted at each panel.

Illustration of multiwavelength 3C 279 jet structure in April 2017. The observing epochs, arrays, and wavelengths are noted at each panel.

The EHT collaboration continues extracting information from the exquisite data collected in its global campaign in April 2017.  Target of the observations was the quasar 3C 279, a galaxy in the constellation Virgo that scientists classify as a quasar because a point of light at its center shines ultra-bright and flickers as massive amounts of gases and stars fall into the giant black hole there. The black hole is about one billion times the mass of the sun.  It is shredding the gas and stars that come near into an inferred accretion disk and we see it is squirting some of the gas back out in two fine fire-hose-like jets of plasma at speeds near the speed of light.  This tells of enormous forces at play in the center.

Now, the linked-up telescopes show the sharpest-ever details, down to a resolution finer than half a light-year, to better see the jet down to the expected accretion disk and to see the jet and disk in action. The newly analyzed data show the normally straight jet has an unexpected twisted shape at its base and for the first time we see features perpendicular to the jet, which first could be interpreted as the accretion disk from where jets are ejected from the poles.  Comparing the images over subsequent days, we see them change in their finest details, probing jet ejection, changes that previously were seen only in numerical simulations.

Jae-Young Kim, leader of the analysis, is enthusiastic and at the same time puzzled: “We knew that every time you open a new window to the Universe you can find something new. Here, where we expected to find the region where the jet forms by going to the sharpest image possible, we find a kind of perpendicular structure. This is like finding a very different shape by opening the smallest Matryoshka doll.”   Furthermore, the fact that the images change so fast has also surprised astronomers. “Relativistic jets show apparent superluminal motions, as an optical illusion, but this, perpendicular to the expectation, is new and requires careful analysis”, adds Jae-Young-Kim.

Thomas Krichbaum, who designed the observations of the source back in 2016 as Principal Investigator of the project, notes the challenging data interpretation: “Motion in transverse jet direction is difficult to reconcile with the simple understanding of an outward propagating relativistic jet. This suggests the presence of propagating plasma instabilities in a bent jet or internal jet rotation.”  He adds: “3C 279 was the first source in astronomy to show superluminal motions, and today, almost fifty years later, still has some surprises for us.”

The telescopes work together using a technique called very long baseline interferometry (VLBI). This synchronises facilities around the world and exploits the rotation of our planet to form one huge, Earth-size telescope. VLBI allows the EHT to achieve a resolution of 20 micro-arcseconds — equivalent to identifying an orange on Earth as seen by an astronaut from the Moon.  The data analysis to transform raw data to an image required specific computers (or correlators), hosted by the MPIfR in Bonn and the MIT Haystack Observatory.

J. Anton Zensus, Director at the MPIfR and Chair of the EHT Collaboration Board, stresses the achievement as a global effort: “Last year we could present the first image of the shadow of a black hole. Now we see unexpected changes in the shape of the jet in 3C 279, and we are not done yet. We are working on the analysis of data from the centre of our Galaxy in Sgr A*, and on other active galaxies such as Centaurus A, OJ 287, and NGC 1052.  As we told last year: this is just the beginning.”

The March/April 2020 observing campaign of the EHT was cancelled due to the CoViD-19 global outbreak.  The EHT Collaboration  is now determined on the next steps to follow both in new observations and in the analysis of existing data. Michael Hecht, astronomer from the MIT/Haystack Observatory and EHT Deputy Project Director, concludes: “We will now devote our full concentration to the completion of scientific publications from the 2017 data and dive into the analysis of data obtained with the enhanced EHT array in 2018. We are looking forward to observations with the EHT array expanded to eleven observatories in March of 2021”. 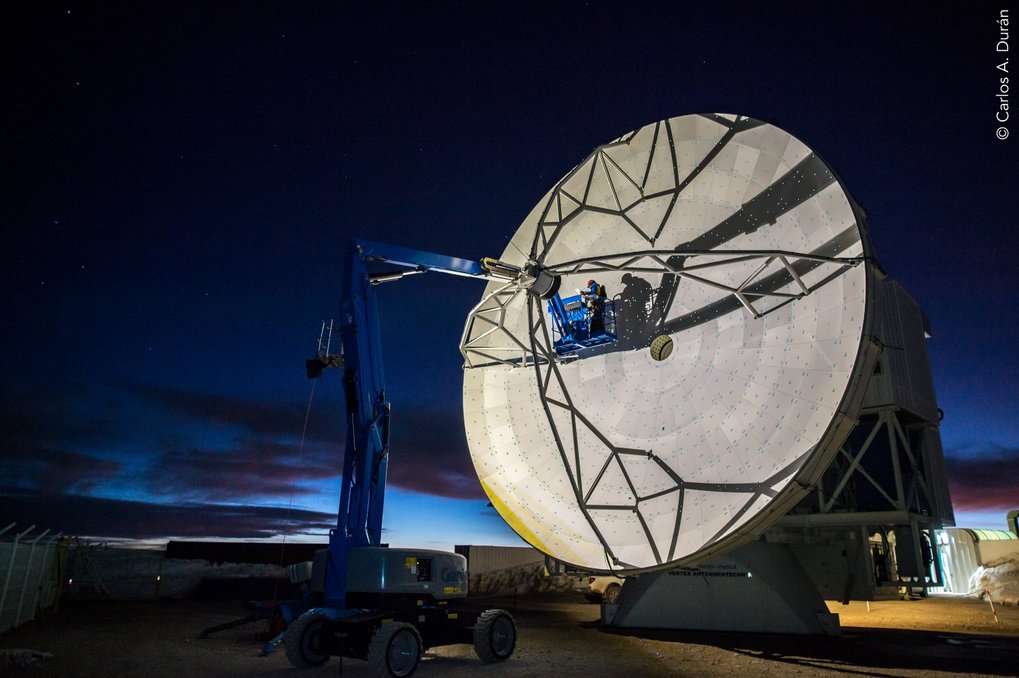 The 12-m Radio Telescope APEX at the Chajnantor plateau in Chile, which participated in the observations of 3C 279.  In ... [more]

The 12-m Radio Telescope APEX at the Chajnantor plateau in Chile, which participated in the observations of 3C 279.  In the picture, the holography team is adjusting the antenna surface in order to increase the surface accuracy of the dish.

The 12-m Radio Telescope APEX at the Chajnantor plateau in Chile, which participated in the observations of 3C 279.  In the picture, the holography team is adjusting the antenna surface in order to increase the surface accuracy of the dish.

The international collaboration announced the first-ever image of a black hole by creating a virtual Earth-sized telescope at the heart of the radio galaxy Messier 87 on April 10, 2019.  Supported by considerable international investment, the EHT links existing telescopes using novel systems — creating a new instrument with the highest angular resolving power that has yet been achieved.

Jae-Young Kim, the first author of the publication, was recently awarded with the Otto Hahn Medal of the Max Planck Society for the high-resolution studies of the innermost structure and the jet formation in the environment of supermassive black holes. The Otto Hahn Medal is awarded in recognition of outstanding achievements from the initial creative period of young scientists.