The Galactic magnetic field plays an important role in the evolution of our Galaxy, but its small-scale behaviour is still poorly known. It is also unknown whether it permeates the halo of the Galaxy or not. By using observations of pulsars in the halo globular cluster 47 Tuc, an international research team led by Federico Abbate from the Max Planck Institute for Radio Astronomy in Bonn, Germany who started this work at University of Milano Bicocca and INAF-Astronomical Observatory of Cagliari, could probe the Galactic magnetic field at scales of a few light years for the first time. They discovered an unexpected strong magnetic field in the direction of the cluster. This magnetic field points perpendicularly to the Galactic disk and could be explained by an interaction with the Galactic wind. This is a magnetized outflow that extends from the Galactic disk into the surrounding halo and its existence has never been proven before.

The results are published in this week’s issue of „Nature Astronomy“. 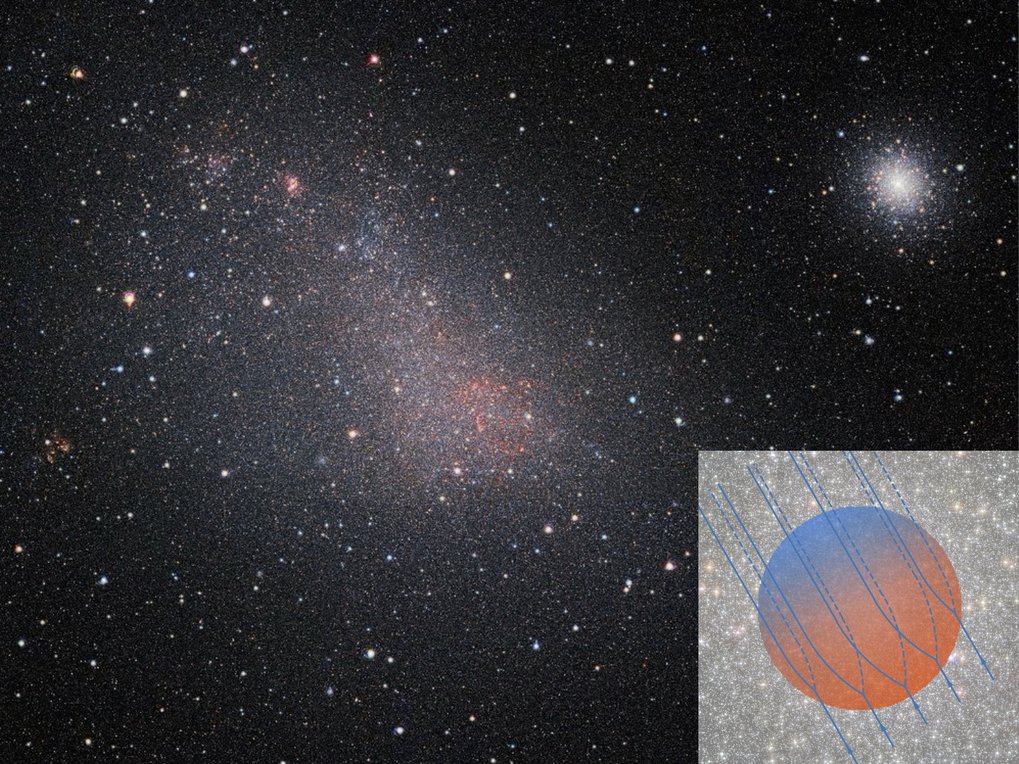 Globular cluster 47 Tuc (upper right) and the Small Magellanic Cloud in the same field-of-view. The inset is a close-up ... [more]

Globular cluster 47 Tuc (upper right) and the Small Magellanic Cloud in the same field-of-view. The inset is a close-up of the cluster showing the detected magnetic field in a colour scale. The lines indicate the effect of the Galactic wind on the magnetic field.

Globular cluster 47 Tuc (upper right) and the Small Magellanic Cloud in the same field-of-view. The inset is a close-up of the cluster showing the detected magnetic field in a colour scale. The lines indicate the effect of the Galactic wind on the magnetic field.

47 Tucanae, or 47 Tuc as it is usually called, is a spectacular globular cluster visible with the naked eye in the constellation “Tucana” in the southern sky close to the Small Magellanic Cloud. The first pulsar in this cluster was discovered in 1990 with the Parkes 64-m radio telescope in Australia, and soon more were found with the same telescope. Currently there are 25 pulsars known in 47 Tuc. For this reason, this very well-studied globular cluster became one of the most important for pulsar astronomers as well.

Pulsars are periodic sources that allow astronomers to measure the so-called dispersion measure which is a delay of the arrival time of the single pulses at different frequencies. This delay is proportional to the density of free electrons along the path from the pulsar to the Earth. “In 2001, we noticed that the pulsars in the far side of the cluster had a higher dispersion measure than those in the near side, which implied the presence of gas in the cluster”, says Paulo Freire from the Max Planck Institute for Radio Astronomy (MPIfR) who led a number of research projects on 47 Tuc.

What makes 47 Tuc even more interesting is that the cluster is at a distance of about 15,000 light years, located in a relatively undisturbed area in the Galactic halo. The halo surrounds the Galactic disk and hosts very few stars and very small quantities of gas. “The pulsars in this cluster can give us a unique and unprecedented insight into the large-scale geometry of the magnetic field in the Galactic halo.” says Federico Abbate, lead author of the paper and now working at MPIfR, who performed the analysis during his PhD at the University of Milano-Bicocca and at INAF - Cagliari Astronomical Observatory.

Understanding the geometry and strength of Galactic magnetic fields is essential to draw a complete picture of our Galaxy. The magnetic fields can affect star formation, regulate the propagation of high-energy particles and help establish the presence of a Galactic scale outflow of gas from the disk to the surrounding halo. Despite their importance, the large-scale geometry of the magnetic fields in the Galactic halo is not fully known.

Magnetic fields are not observable directly, but scientists make use of the effects they have on the low-density plasma that permeates the Galactic disk. In this plasma, the electrons are separated from the atomic nuclei and they behave like small magnets. The electrons are attracted by the magnetic field and are forced to orbit the magnetic field lines, emitting radiation known as synchrotron radiation. Other than emitting their own radiation, the free electrons also leave a peculiar signature on the polarized radiation that travels through the plasma. The electromagnetic field of the polarized radiation oscillates always in the same direction and the electrons in a magnetized medium will rotate this direction by different amounts at different frequencies. This effect is called Faraday rotation and is measurable only at radio frequencies.

Observations of polarized radio emission work well to constrain the magnetic field in the Galactic disk where the plasma is dense enough. In the Galactic halo, however, the plasma density is too low to directly observe the effects. For this reason, the geometry and strength of the magnetic field in the halo is unknown and models predict that it could either be parallel or perpendicular to the disk. The presence of a magnetized outflow from the disk to the halo has been suggested following observations in other galaxies. It can also explain the diffuse X-ray emission in the Galaxy.

Recent observations of the pulsars in 47 Tuc, also performed with the Parkes radio telescope in Australia, were able to measure their polarized radio emission and their Faraday rotation.  These reveal the presence of a magnetic field in the globular cluster that is surprisingly strong - so strong, in fact, that it cannot be maintained by the globular cluster itself but requires an external source located in the Galactic halo. The direction of the magnetic field is compatible with that of the Galactic wind, perpendicular to the Galactic disk. The interaction of the Galactic wind and the cluster forms a shock that amplifies the magnetic field to the values observed.

This work reveals a new technique to study the magnetic field in the Galactic halo. This cluster is a perfect target for observations with the innovative MeerKAT radio telescope in South Africa. “In the near future, the MeerKAT telescope will greatly improve the polarization measurements and possibly not only confirm the presence of the Galactic wind but also constrain its properties,” says Andrea Possenti from the INAF – Cagliari Astronomical Observatory who is involved in the globular cluster pulsars efforts with MeerKAT together with the MPIfR. Moreover, this powerful telescope in particular with its further development towards the Square Kilometre Array (SKA) has the capabilities to observe other globular clusters in the halo and corroborate the results.