According to Einstein's general relativity, the rotation of a massive object produces a dragging of space-time in its vicinity. This effect has been measured, in the case of the Earth’s rotation, with satellite experiments. With the help of a radio pulsar, an international team of scientists (with important contributions from scientists at the Max Planck Institute for Radio Astronomy in Bonn, Germany) were able to detect the swirling of the space-time around its fast-rotating white dwarf-companion star, and thus confirm the theory behind the formation of this unique binary star system.

The results are published in this week’s issue of „Science“. 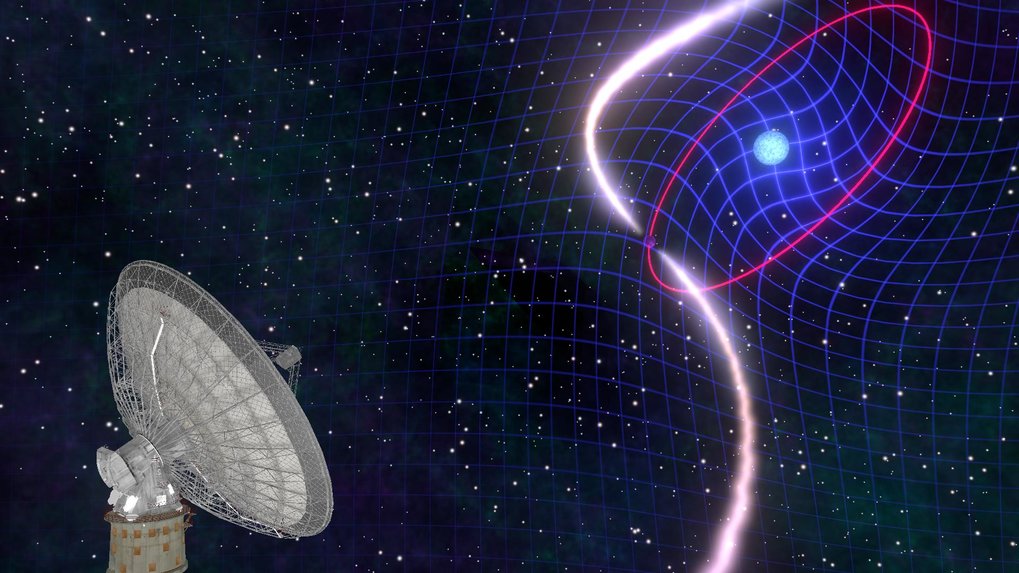 The white dwarf-pulsar binary system PSR J1141-6545 discovered by the CSIRO’s Parkes radio telescope. The pulsar orbits its white dwarf companion every 4.8 hours. The white dwarf’s rapid rotation drags space-time around it, causing the entire orbit to change its orientation.

The white dwarf-pulsar binary system PSR J1141-6545 discovered by the CSIRO’s Parkes radio telescope. The pulsar orbits its white dwarf companion every 4.8 hours. The white dwarf’s rapid rotation drags space-time around it, causing the entire orbit to change its orientation.

In 1999, a unique binary system was discovered with the Australian Parkes Radio Telescope in the constellation Musca (the Fly), close to the famous Southern Cross constellation. In this system, the radio pulsar PSR J1141-6545 and a relatively massive white dwarf star orbit each other, with a ‘year’ lasting less than 5 hours. A radio pulsar is a fast-rotating neutron star, which emits radio waves along its magnetic poles. “This pulsar’s orbit is very special. It hurtles through space with a maximum speed of almost a million km/h in its orbit as the maximum separation between the stars is barely larger than the size of our Sun.’’, says Dr. Vivek Venkataraman Krishnan, the first author of the paper and a scientist at the Max Planck Institute for Radio Astronomy, who performed the data analysis and parts of the observations of PSR J1141-6545 when he was a PhD student at Swinburne University of Technology in Australia.

Unlike other binary systems that consist of a pulsar and a white dwarf, theoretical models indicate that the white dwarf companion to PSR J1141-6545 formed before the pulsar. An important prediction of these models is that, before the supernova explosion that formed the pulsar, there was significant mass transfer from the progenitor of the pulsar to the white dwarf. This resulted in an enormous acceleration of the white dwarf's rotation. “Measuring this rotation is an important test of our models of the evolution of binary systems’’, says Prof. Thomas Tauris, a co-author of the study and expert in neutron stars and white dwarfs at the University of Aarhus in Denmark.

The standard means for measuring the rotation of a star is by studying its spectral lines. However, the white dwarf companion to PSR J1141-6545 is too faint for that. So how can one measure its rotation? The answer came from an unexpected direction and leads back over 100 years in the development of theoretical physics.

Even before the completion of general relativity in November 1915, Albert Einstein had already realized that in a theory where gravitation is the result of curved space-time, the rotation of a mass will in general - unlike in Newton's theory of gravity - contribute directly to the gravitational field. To put it simply, the rotation of a mass swirls the space-time in its vicinity, an effect commonly known as “frame-dragging”. Later in 1918, Josef Lense and Hans Thirring - with substantial support from Albert Einstein - calculated this effect for our Solar System using general relativity. In particular, they calculated how the dragging of space-time caused by the rotation of the Sun influences the movement of planets. They concluded that these effects were impossibly small to measure at that time.

Meanwhile, technology progressed and the frame-dragging effect caused by the Earth's rotation was eventually detected by satellite experiments such as Gravity Probe B, and the combination of the laser-ranging satellites LAGEOS 1 & 2 and LARES. While Gravity Probe B used a set of four precision gyroscopes to measure this effect, the latter experiments measured a slow precession of the orbital plane of the satellites in the direction of Earth's rotation, the so-called “Lense-Thirring precession”. This precession of the satellites has, in the meantime, been confirmed to an accuracy of about 2%, in agreement with the prediction by general relativity. The effect is extremely small: LAGEOS-1, for example, is in a circular orbit with a radius of approximately 12,300 km. Its orbital plane precesses only by 0.0000086 degrees per year, which corresponds to a full rotation in about 40 million years.

The situation in the vicinity of the white dwarf companion to PSR J1141-6545, according to the stellar evolution models, should be quite different: although it is a bit smaller than the Earth, its mass is 340,000 times larger, similar to the mass of the Sun. It is expected to rotate around its own axis within a few minutes. “If LAGEOS-1 was hypothetically orbiting this white dwarf, its orbit would precess by several degrees a day, as the dragging of space-time is about 100 million times stronger’’, says Dr. Norbert Wex, co-author and specialist in general relativity at the MPIfR.

It is impossible to send satellites to this white dwarf as it is several thousand light-years away (a few hundred quadrillion kilometres), but fortunately, there is a pulsar in orbit. The radio signals from this pulsar provide a precise measurement of its motion, similar to the laser ranging measurements of the LARES and LAGEOS-1 & 2 satellites. “With the help of atomic clocks, we were able to perform highly accurate measurements of the arrival times of the pulsar signals at the Parkes and UTMOST radio telescopes. We could track the pulsar in its orbit with an average ranging precision of 30 km per measurement, over a period of almost twenty years. This led to a precise determination of the size and orientation of the orbit”, explains Dr. Vivek Venkatraman Krishnan.

At the distance of the pulsar from the white dwarf, the dragging of space-time is about a million times weaker than at the distance of a LAGEOS-1-like orbit. However, the Lense-Thirring precession should still cause, over these 20 years, precession of the pulsar's path of about 150 km.  “Observations of pulsar J1141-6545 indeed show such a deviation which, after detailed calculations and ruling out a range of potential experimental errors, were confirmed to be caused by a change in its orbital orientation”, explained Dr. Willem van Straten, co-author and scientist at Auckland University of Technology in New Zealand.

A careful analysis of this measurement which took into account the Lense-Thirring effect allowed the estimation of the rotational period of the white dwarf: it was found to be about 100 seconds. This is a beautiful confirmation of the idea that, before the supernova explosion that formed the pulsar 1.5 million years ago, there was a significant mass transfer from the progenitor of the pulsar to the white dwarf. “Here Albert Einstein gave us a tool, which we can now use to find out more about pulsars and their companions in the future’’, said Prof. Matthew Bailes, co-author and scientist at Swinburne University, Australia.

New and upcoming radio telescopes such as MeerKAT and the Square Kilometre Array (SKA) will play a central role in understanding how Einstein’s theory is at play in such natural laboratories. “With the SKA expected to detect more exotic binary systems like this one, we’ll be able to investigate many more effects predicted by general relativity” concluded Dr. Evan Keane, co-author and scientist at the SKA Organisation in the UK.