ASTRON & The University of Amsterdam, The Netherlands

A Repeating Fast Radio Burst from a Spiral Galaxy

Localisation of a new, recurring source of radio flashes deepens the mystery of their origins

The Effelsberg 100-m radio telescope participated in the European VLBI Network (EVN) to observe a repeating Fast Radio Burst (FRB) and helped to pinpoint the FRB to a spiral galaxy similar to our own. Crucial to this work was the sensitivity of the Effelsberg telescope and its flexible pulsar instrument that aided the quick radio localisation. This FRB is the closest to Earth ever localised and was found in a radically different environment to previous studies. The discovery, once again, changes researchers’ assumptions on the origins of these mysterious extragalactic events.

The results are reported in the current issue of the journal Nature by an international team of scientists including Ramesh Karuppusamy from the Max Planck Institute for Radio Astronomy in Bonn, Germany. 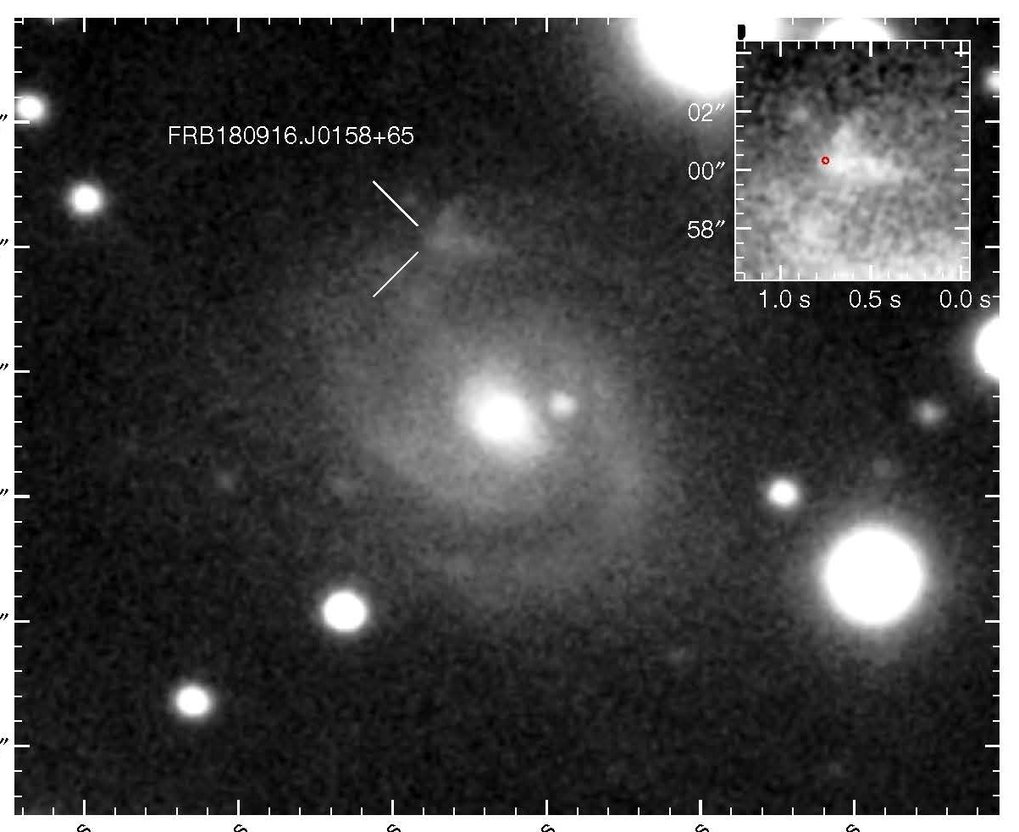 Image of the host galaxy of the Fast Radio Burst (FRB) 180916.J0158+65 as seen with the Gemini-North telescope. The position of the FRB is marked. The inset is a higher-contrast zoom-in of the star-forming region containing the FRB (marked by the red circle).

Image of the host galaxy of the Fast Radio Burst (FRB) 180916.J0158+65 as seen with the Gemini-North telescope. The position of the FRB is marked. The inset is a higher-contrast zoom-in of the star-forming region containing the FRB (marked by the red circle).

One of the greatest mysteries in astronomy right now is the origin of short, dramatic bursts of radio light seen across the universe, known as Fast Radio Bursts or FRBs. Although they last for only a thousandth of a second, there are now hundreds of records of these enigmatic sources. However, from these records, the precise location is known for just four FRBs - they are said to be ‘localised’.

In 2016, one of these four sources was observed to repeat, with bursts originating from the same region in the sky in a non-predictable way. This resulted in researchers drawing distinctions between FRBs where only a single burst of light was observed (‘non-repeating’) and those where multiple bursts of light were observed (‘repeating’).

“The multiple flashes that we witnessed in the first repeating FRB arose from very particular and extreme conditions inside a very tiny (dwarf) galaxy”, says Benito Marcote, from the Joint Institute for VLBI ERIC, the lead author of the current study. “This discovery represented the first piece of the puzzle but it also raised more questions than it solved, such as whether there was a fundamental difference between repeating and non-repeating FRBs. Now, we have localised a second repeating FRB, which challenges our previous ideas on what the source of these bursts could be.”

On 19th June 2019, eight telescopes from the European VLBI Network (EVN) simultaneously observed a radio source known as FRB 180916.J0158+65. This source was originally discovered in 2018 by the CHIME telescope in Canada, which enabled the team to conduct a very high resolution observation with the EVN in the direction of FRB 180916.J0158+65. During five hours of observations the researchers detected four bursts, each lasting for less than two thousandths of a second.  The resolution reached through the combination of the telescopes across the globe, using a technique known as Very Long Baseline Interferometry (VLBI), meant that the bursts could be precisely localised to a region of approximately only seven light years across. This localisation is comparable to an individual on Earth being able to distinguish a person on the Moon.

The Effelsberg 100-m radio telescope of the Max Planck institute for Radio Astronomy (MPIfR) played a crucial role in these observations in two ways. With the flexible instruments at this telescope one could record data amenable to rapid identification of radio bursts and a form of data suitable for high resolution radio imaging. Secondly the large collecting area of the telescope makes it an indispensable element in the coordinated interferometric observations of weak sources like this FRB.

With the precise position of the radio source the team was able to conduct observations with one of the world’s largest optical telescopes, the 8-m Gemini North on Mauna Kea in Hawaii. Examining the environment around the source revealed that the bursts originated from a spiral galaxy named SDSS J015800.28+654253.0, located half a billion light years from Earth. The bursts come from a region of that galaxy where star formation is prominent.

“The found location is radically different from the previously located repeating FRB, but also different from all previously studied FRBs”, explains Kenzie Nimmo, PhD student at the University of Amsterdam. “The differences between repeating and non-repeating fast radio bursts are thus less clear and we think that these events may not be linked to a particular type of galaxy or environment. It may be that FRBs are produced in a large zoo of locations across the Universe and just require some specific conditions to be visible.”

“With the characterisation of this source, the argument against against pulsar-like emission as origin for repeating FRBs is gaining strength”, says Ramesh Karuppusamy of the MPIfR, a co-author of the study. “We are at the verge of more such localisations brought about by the upcoming newer telescopes. These will finally allow us to establish the true nature of these sources”, he adds.

While the current study casts doubt on previous assumptions, this FRB is the closest to Earth ever localised, allowing astronomers to study these events in unparalleled detail.

“We hope that continued studies will unveil the conditions that result in the production of these mysterious flashes. Our aim is to precisely localize more FRBs and, ultimately, understand their origin”, concludes Jason Hessels, corresponding author on the study, from the Netherlands Institute for Radio Astronomy (ASTRON) and the University of Amsterdam. 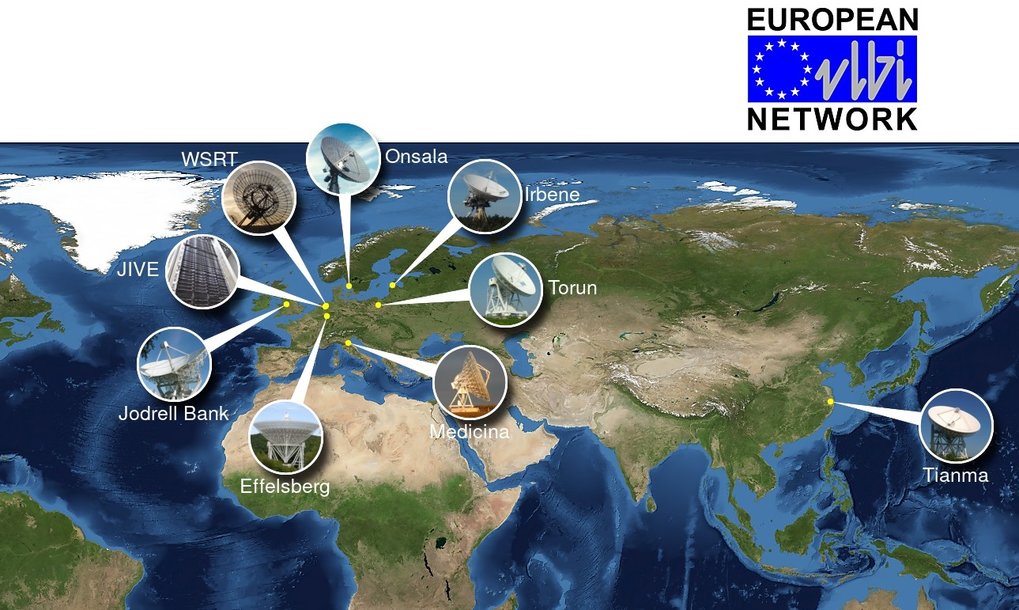 While Fast Radio Bursts (FRBs) are a mystery of their own, their study could bring astronomers closer to understanding the Universe itself. In modern cosmology a major question is how structures on all scales were formed. There are computationally expensive simulations to address these questions, but their results strongly depend on the assumed conditions in the early Universe. Results from such simulations need to be compared with actual observations to determine if the simulations provide accurate answers. This is problematic as the majority of matter distributed within galaxies is invisible.

FRBs, however, may offer an elegant solution to this problem in the future. The short pulses from FRBs are “dispersed”, so at longer wavelengths the pulse arrives to Earth slightly later than at shorter wavelengths. This time delay can be measured very accurately, and it is an indirect estimate of the amount of material between the source and the Earth.  If thousands of FRBs are found, in all directions, it will be possible to map the distribution of matter across the universe. However, in order to get the true three-dimensional distribution of matter in space, astronomers need to know the distance of each FRB from Earth as well.

How to localise a Fast Radio Burst

In the majority of searches for FRBs a single radio telescope is used to identify the approximate region that the FRB is originating from. However, the use of very high resolution radio observations through Very Long Baseline Interferometry (VLBI) adopts a novel approach.

Currently, the European VLBI Network (EVN) is the only VLBI array that is sensitive enough to study FRBs. In doing so, astronomers are able to determine both the host galaxy and the immediate local environment of the FRB. By determining the host galaxy, astronomers can then use optical observations to analyze the light coming from the galaxy and this can be used to determine its distance from Earth. Studying the environments in which FRBs occur is the key to understanding how these bursts can be produced and which extragalactic objects are associated with them.

“As we continue to unravel the mystery of FRBs, astronomers need to be able to study these sources in incredible detail. The combined sensitivity of the telescopes in the EVN currently provides a unique opportunity to observe these events and we hope that continued observations will contribute to our understanding of these enigmatic sources.” says Francisco Colomer, Director of the Joint Institute for VLBI ERIC.

Institutes involved Observations were conducted with the European Very Long Baseline Interferometry Network (EVN). The EVN is the most sensitive Very Long Baseline Interferometry (VLBI) array in the world, which allows researchers to conduct unique, high-resolution, radio astronomical observations of cosmic radio sources. Data from the EVN is processed at the Joint Institute for VLBI ERIC (JIVE) - an international research infrastructure based in the Netherlands, which also provides support, conducts leading research and forwards technical development in the field of radio astronomy.