An international research team including astronomers from the Max Planck Institute for Radio Astronomy in Bonn, Germany, has combined radio telescopes from five continents to prove the existence of a narrow stream of material, a so-called jet, emerging from the only gravitational wave event involving two neutron stars observed so far. With its high sensitivity and excellent performance, the 100-m radio telescope in Effelsberg played an important role in the observations.

The results are published in this week’s issue of „Science“. 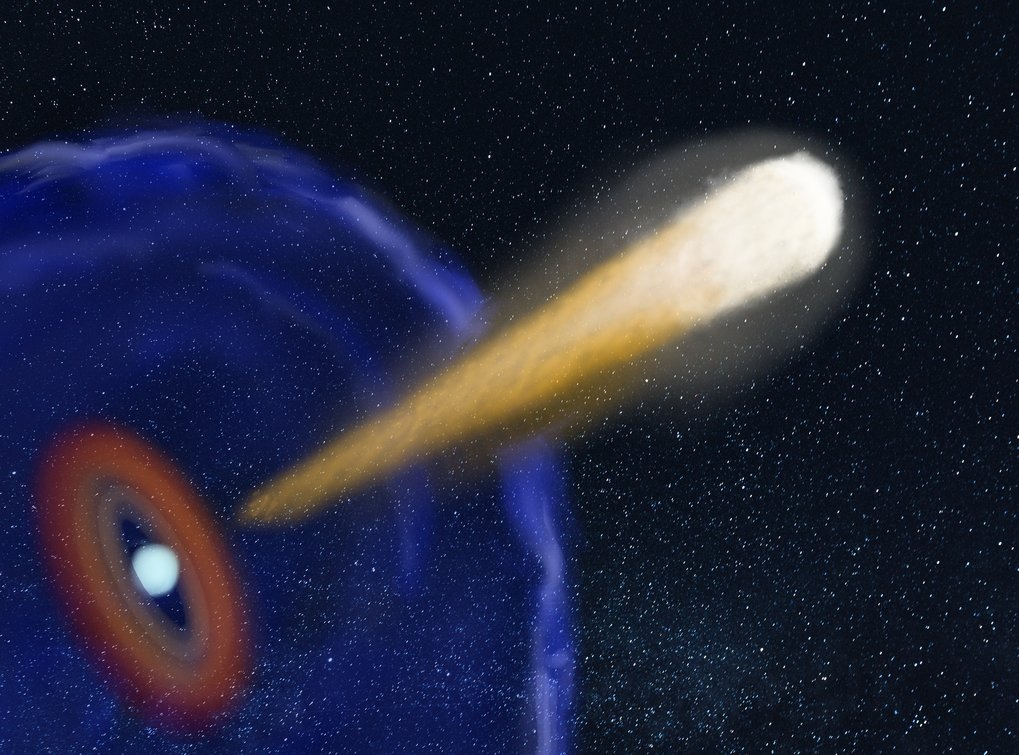 Artist’s impression of the jet of material launched after the merger of the two neutron stars.

Artist’s impression of the jet of material launched after the merger of the two neutron stars.

In August 2017, two neutron stars were observed colliding, producing gravitational waves that were detected by the American LIGO and European Virgo detectors. Neutron stars are ultra-dense stars, roughly the same mass as the Sun, but similar in size to a city like Cologne. This event is the first and only one of this type that has been observed so far, and it happened in a galaxy 130 million light years away from Earth, in the constellation of Hydra.

Astronomers observed the event and the subsequent evolution across the entire electromagnetic spectrum, from gamma-rays, X-rays to visible light and radio waves. Two hundred days after the merger, observations combining radio telescopes in Europe, Africa, Asia, Oceania, and North America proved the existence of a jet emerging from this violent collision. These findings are now published in the scientific journal Science by an international team of astronomers, led by Giancarlo Ghirlanda from the Italian National Institute for Astrophysics (INAF).

This neutron star merger represented the first case where it was possible to associate a detection of gravitational waves to an object emitting light. The event has confirmed scientific theories that have been under discussion for tens of years, and the association of neutron star mergers with one of the most powerful explosions in the Universe: gamma-ray bursts. After the merger, a huge amount of material was expelled into space, forming a shell around the object. Astronomers have been tracing its evolution at different wavelengths. However, there were still some remaining questions concerning this event that could not be clarified by any previous observations.

"We expected part of the material to be ejected through a collimated jet, but it was unclear whether this material could successfully pierce through the surrounding shell." explains Ghirlanda. “There were two competing scenarios: In one case, the jet cannot break through the shell, instead generating an expanding bubble around the object. In the other, the jet is successful in penetrating the shell and then propagates further into space”, expands Tiziana Venturi (INAF). Only the acquisition of very sensitive radio images with very high resolution would discard one scenario or the other. This required the use of a technique known as very long baseline interferometry (VLBI) that allows astronomers to combine radio telescopes all around the Earth.

The authors of this publication conducted global observations in the direction of the merger on 12 March 2018 using thirty-three radio telescopes from the European VLBI Network (that connects telescopes from Spain, the United Kingdom, The Netherlands, Germany, Italy, Sweden, Poland, Latvia, South Africa, Russia, and China), e-MERLIN in the UK, the Australian Long Baseline Array in Australia and New Zealand, and the Very Long Baseline Array in the USA.

„Our 100-m radio telescope in Effelsberg participated in the observations and was a key element, due to its high sensitivity and excellent performance“, says Carolina Casadio, a member of the research team from the Max Planck Institute for Radio Astronomy (MPIfR).

The data from all telescopes were sent to JIVE, The Netherlands, where the most advanced processing techniques were used to produce an image with a resolution comparable to resolving a person on the surface of the Moon. In the same analogy, the expanding bubble would appear with an apparent size equivalent to a truck on the Moon, whereas a successful jet would be detected as a much more compact object.

"Comparing the theoretical images with the real ones, we find that only a jet could appear sufficiently compact to be compatible with the observed size.", explains Om Sharan Salafia from INAF in Italy. The team determined that this jet contained as much energy as produced by all the stars in our Galaxy during one year. “And all that energy was contained in a size smaller than one light year.” says Zsolt Paragi, also from JIVE.

„Within Europe we utilize the RadioNet consortium for an efficient use of our members’ radio telescopes. The observations descibed here combine radio observatories all over Europe and world wide. They require a well-coordinated effort of the collaborating observatories and institutions to achieve such exciting results”, explains Anton Zensus, Director at MPIfR and coordinator of the RadioNet consortium.

In the coming years, many more of these neutron star binary mergers will be discovered. “The obtained results also suggest that more than 10% of all these mergers should exhibit a successful jet.”, explains Benito Marcote from JIVE. "These types of observations will allow us to unveil the processes that take place during and after some of the most powerful events in the Universe.", concludes Sándor Frey from the Konkoly Observatory in Hungary. Image of the source obtained from the combination of thirty-three radio telescopes from five continents. The source can ... [more]

Image of the source obtained from the combination of thirty-three radio telescopes from five continents. The source can be seen in the center of the image as a red spot (false color image made entirely for illustration).

Image of the source obtained from the combination of thirty-three radio telescopes from five continents. The source can be seen in the center of the image as a red spot (false color image made entirely for illustration).

Very long baseline interferometry (VLBI) is an astronomical method by which multiple radio telescopes distributed across great distances observe the same region of sky simultaneously. Data from each telescope is sent to a central "correlator" (e.g. at JIVE or at MPIfR) to produce images with higher resolution than the most powerful optical telescopes.

The European VLBI Network (EVN) is an interferometric array of radio telescopes spread throughout Europe, Asia, South Africa and the Americas that conducts unique, high-resolution, radio astronomical observations of cosmic radio sources. Established in 1980, the EVN has grown into the most sensitive VLBI array in the world, including over 20 individual telescopes, among them some of the world's largest and most sensitive radio telescopes. The EVN is administered by the European Consortium for VLBI, which includes a total of 15 institutes, including the Max Planck Institute for Radio Astronomy in Bonn, Germany.

The research leading to these results has received funding from the European Commission Horizon 2020 Research and Innovation Programme under grant agreement No. 730562 (RadioNet). 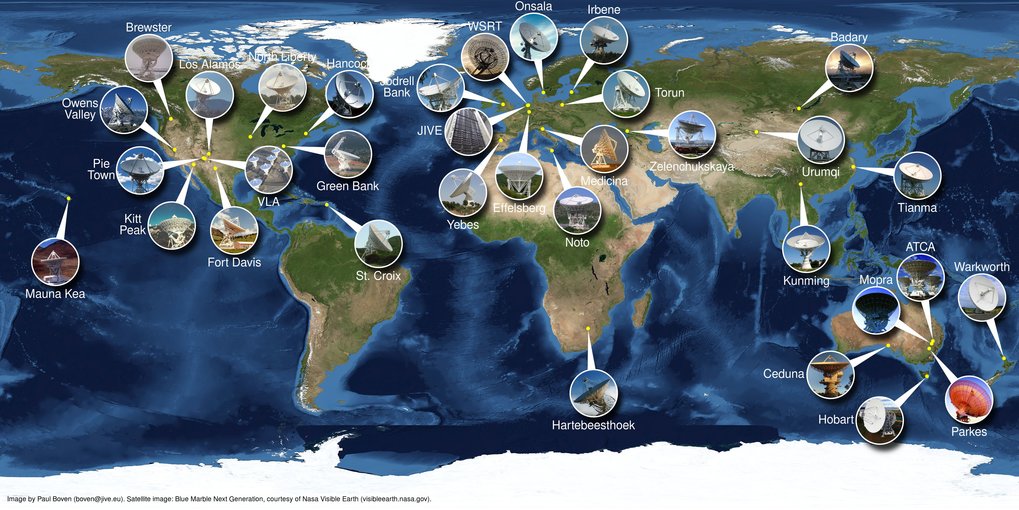 World-wide distribution of all facilities that participated in this observation.

World-wide distribution of all facilities that participated in this observation.