Including the powerful ALMA into an array of telescopes for the first time, astronomers have found that the emission from the supermassive black hole Sagittarius A* (Sgr A*) at the center of our Galaxy comes from a smaller region than previously thought. This may indicate that a radio jet from Sgr A* is pointed almost directly towards the Earth.

The work, performed by an international team with participation of the Max Planck Institute for Radio Astronomy, is published in the Astrophysical Journal. 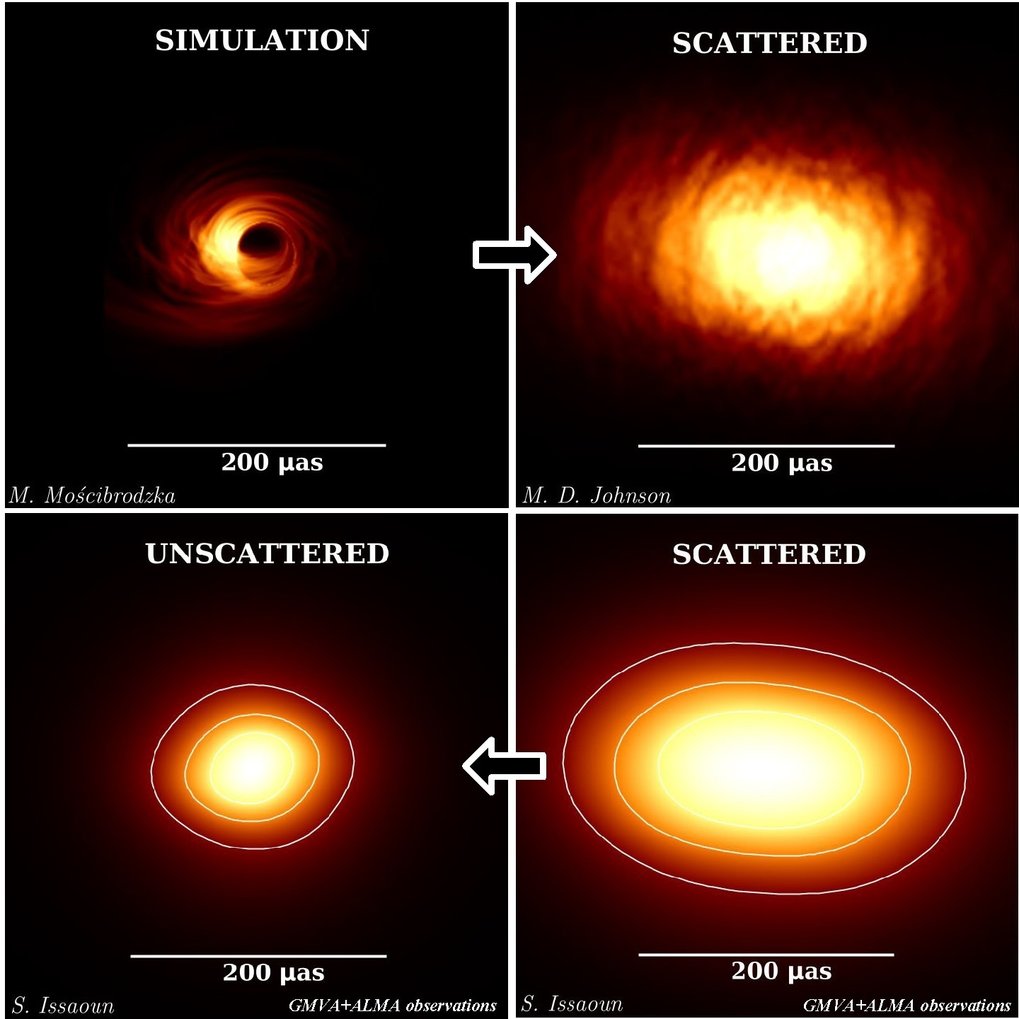 So far, a foggy cloud of hot gas has prevented astronomers from making sharp images of the supermassive black hole Sgr A* and causing doubt on its true nature. They have now included for the first time the powerful ALMA telescope in northern Chile into a global network of radio telescopes to peer through this fog, but the source keeps surprising them: its emission region is so small that the source may actually have to point directly at the direction of the Earth.

Observing at a frequency of 86 GHz with the technique of Very Long Baseline Interferometry (VLBI), which combines many telescopes to form a virtual telescope the size of the Earth, the team succeeded in mapping out the exact properties of the light scattering blocking our view of Sgr A*. The removal of most of the scattering effects has produced a first image of the surroundings of the black hole.

The high quality of the unscattered image has allowed the team to constrain theoretical models for the gas around Sgr A*. The bulk of the radio emission is coming from a mere 300 milllionth of a degree, and the source has a symmetrical morphology. “This may indicate that the radio emission is produced in a disk of infalling gas rather than by a radio jet,” explains Sara Issaoun, graduate student at the Radboud University Nijmegen in the Netherlands, who leads the work and has tested several computer models against the data. “However, that would make Sgr A* an exception compared to other radio emitting black holes. The alternative could be that the radio jet is pointing almost at us”.

The German astronomer Heino Falcke, Professor of Radio Astronomy at Radboud University and PhD supervisor of Issaoun, calls this statement very unusual, but he also no longer rules it out. Last year, Falcke would have considered this a contrived model, but recently the GRAVITY team came to a similar conclusion using ESO’s Very Large Telescope Interferometer of optical telescopes and an independent technique. “Maybe this is true after all”, concludes Falcke, “and we are looking at this beast from a very special vantage point.”

Supermassive black holes are common in the centers of galaxies and may generate the most energetic phenomena in the known universe. It is believed that, around these black holes, matter falls in a rotating disk and part of this matter is expelled in opposite directions along two narrow beams, called jets, at speeds close to the speed of light, which typically produces a lot of radio light. “Whether the radio emission seen from SgrA* originates from a symmetrical underlying structure, or is intrinsically asymmetric is a matter of intense discussion”, explains Thomas Krichbaum, member of the team.

Sgr A* is the nearest supermassive black hole and 'weighs' about 4 million solar masses. Its apparent size on the sky is less than a 100 millionth degree, which corresponds to the size of a tennis ball on the moon as seen from the Earth. To measure this, the technique of VLBI is required. The resolution achieved with VLBI is further increased by the observation frequency. The highest frequency to date for VLBI is 230 GHz. “The first observations of Sgr A* at 86 GHz date from 26 years ago, led by Thomas  Krichbaum at our Institute, with only a handful of telescopes. Over the years, the quality of the data and imaging capabilities has improved steadily as more telescopes join.”, says J. Anton Zensus, director at the Max Planck Institute for Radio Astronomy and head of its Radio Astronomy/VLBI division.

The findings of Issaoun and her international team including scientists from two research departments (Kramer & Zensus) at MPIfR describe the first observations at 86 GHz in which ALMA also participated, by far the most sensitive telescope at this frequency. ALMA became part of the Global Millimeter VLBI Array (GMVA), which is operated by the Max Planck Institute for Radio Astronomy, in April 2017. The participation of ALMA, made possible by the ALMA Phasing Project effort, has been decisive for the success of this project.

The participation of ALMA in mm-VLBI is important because of its sensitivity and its location in the southern hemisphere. In addition to ALMA, twelve radio telescopes in North America and Europe also participated in the network. The resolution achieved was twice as large as in previous observations at this frequency and produced the first image of Sgr A* that is considerably reduced in interstellar scattering (an effect caused by density irregularities in the ionized material along the line of sight between Sgr A* and the Earth)

To remove the scattering and obtain the image, the team used a technique developed by Michael Johnson of the Harvard-Smithsonian Center for Astrophysics (CfA). "Even though scattering blurs and distorts the image of Sgr A*, the incredible resolution of these observations allowed us to pin down the exact properties of the scattering,” says Johnson. “We could then remove most of the effects from scattering and begin to see what things look like near the black hole. The great news is that these observations show that scattering will not prevent the Event Horizon Telescope from seeing a black hole shadow at 230 GHz, if there's one to be seen."

Future studies at different wavelengths will provide complementary information and further observational constraints for this source, which holds the key to a better understanding of black holes, the most exotic objects in the known universe. 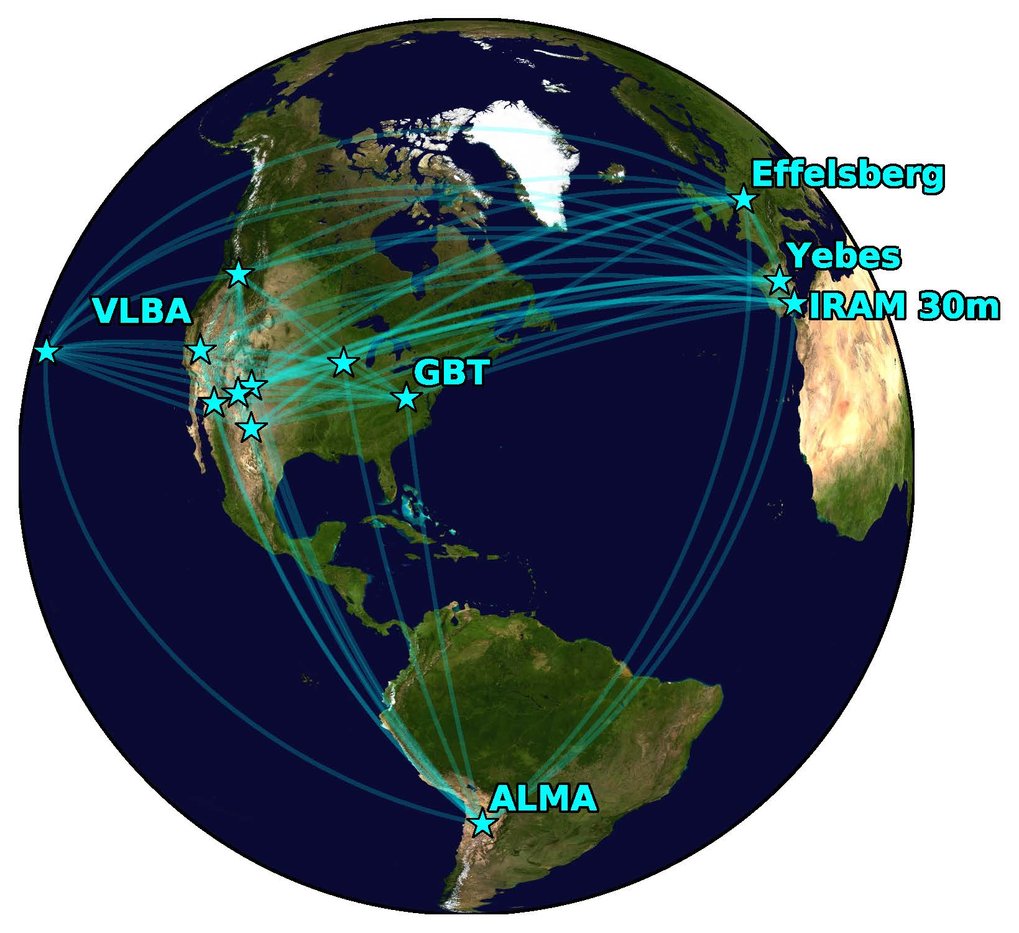 The data were correlated at the Max Planck Institute for Radio Astronomy (MPIfR), which also operates the Global Millimeter-VLBI Array (GMVA). Data analysis software was developed at the MIT Haystack Observatory and the Smithsonian Astrophysical Observatory.

Several members of the team worked in this project as part of the European Research Council funded BlackHoleCam (BHC) team.

The participation of the Atacama Large Millimeter/submillimeter Array (ALMA) through the ALMA Phasing Project has been decisive for the success of this project.

The GMVA is partially supported by the European Union’s Horizon 2020 research and innovation programme under grant agreement No. 730562.