A galaxy with at least one active supermassive black hole – named OJ 287 – has caused many irritations and questions in the past. The emitted radiation of this object spans a wide range – from the radio up to the highest energies in the TeV regime. The potential periodicity in the variable optical emission made this galaxy a candidate for hosting a supermassive binary black hole in its centre. The object was thus labeled a Rosetta stone of active galactic nuclei expressing the hope that this object could be a prototypical object and once deciphered, could explain fundamental properties of active black holes in general. Now an international team of astronomers led by Max Planck researchers has discovered that the active galactic nucleus of OJ 287 generates a smoothly precessing jet on a timescale of about 22 years. The precession of the jet observed could also explain the variability in the radiation of the galaxy. This detection solves many riddles at once and provides a key to understanding variability in active galactic nuclei.

The findings are published in the journal Monthly Notices of the Royal Astronomical Society (2018 June 21). 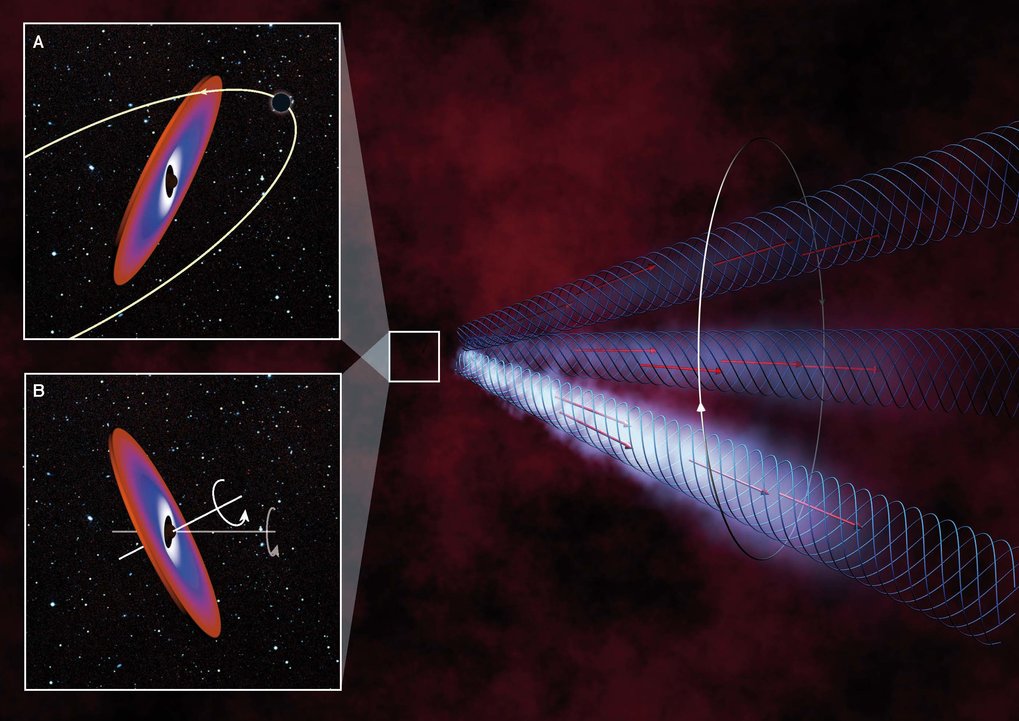 Artist’s impression of the central region of the active galaxy OJ 287 with a preceding jet. The precession could either ... [more]

Artist’s impression of the central region of the active galaxy OJ 287 with a preceding jet. The precession could either be caused by a binary black hole (Inset A) or by a mis-aligned accretion disk (Inset B).

Artist’s impression of the central region of the active galaxy OJ 287 with a preceding jet. The precession could either be caused by a binary black hole (Inset A) or by a mis-aligned accretion disk (Inset B).

It took a long time to decipher the Egyptian hieroglyphs, the inscriptions of the pyramids. It finally succeeded with the help of the so-called Rosetta Stone found in 1799. This stele was inscribed with three versions of the same text – one in Ancient Egyptian using hieroglyphic script, one in Demotic script, and the bottom one in Ancient Greek. Realizing that it is the same text, the enigmatic hieroglyphs could be deciphered and translated with the help of the ancient Greek language. This discovery opened up a whole new window to understand the ancient Egyptian culture. A research team now has deciphered the jet of a galaxy which has been named the Rosetta Stone of blazars. Blazars are active galactic nuclei where a central supermassive black hole is being fed.

The well-known galaxy OJ 287 at a distance of about 3.5 billion light years harbors at least one supermassive black hole weighing Millions to Billions of solar masses.  The supermassive black hole is active and produces a jet – a plasma stream which originates in the central nuclear region of galaxies in the vicinity of the central black hole.  This jet is observable at radio wavelengths. The galaxy is also a well-known target to optical astronomers. The brightness fluctuations of this galaxy in the optical regime are legendary and have been observed since the late 19th century, providing one of the longest light-curves in astronomy.

However, despite decades of radio observations of many jet sources and many sophisticated studies, jets remained enigmatic. Traditionally, the origin of the jet brightness variations observed at radio wavelengths was attributed to the jet feeding mechanism by the central black hole system. On the other hand, the observed moving features in the jets - called knots - were attributed to shocks traveling in the jet. Researchers looked for a connection between both phenomena but this could not be done consistently so far.

The research team led by Silke Britzen from the Max Planck Institute for Radio Astronomy (MPIfR) in Bonn used a clever observational technique to monitor the jet of OJ 287 close to its launching site near the central black hole in precious detail. The technique of radio interferometry involves radio telescopes around the globe in order to construct a virtual monster telescope of earth size diameter that is able to zoom into the very centers of galaxies and to observe jets close to the central black hole with unprecedented resolution.

By considering a large data set spanning a long period of time, the team has now found strong indication that both phenomena have the same origin: both types of observations can be explained by the motion of the jet only. The jet itself is precessing. Michal Zajacek, also from the MPIfR, who has done the modeling of the precession model: „The brightness variations result from the jet precession that induces a variation of the Doppler boosting when the viewing angle of the jet changes. It was really surprising when we found that not only does the jet precess, it also seems to follow a smaller nutation-like motion. The combined precession-nutation motion leads to the radio variability and can also explain some of the light flares.“

„We realized that it is the same physical process that explains both the jet wandering in the sky and the brightness variations of the galaxy - that is the change of motion of the jet. It’s all geometry and deterministic. No magic involved, so far“, adds Silke Britzen. „This offers a unique opportunity to understand the jets and their potential origin in the immediate vicinity of the black hole. This jet really serves as Rosetta stone for us and will allow to understand jets and their active black holes much more fundamentally.“

Britzen and her team are convinced that the precession-scenario can also explain the 130 years of optical flaring of this source but, as always, more data and more work is required for a final confirmation.

A pressing question remains about the origin of the jet precession. Precession is a physical process well-known from spinning tops or the Earth itself. The rotational axis of our planet is not stable but orbiting in space with a period of 26,000 years due to the tidal influence of the Sun and the moon. For the jet precession in OJ 287 the team has indicated two possible scenarios. „We either have a system of two supermassive black holes with the disk-ejecting jet forced to wobble by tidal effects of the secondary black hole or a single black hole that is tidaly interacting with a misaligned accretion disk." concludes Christian Fendt from the Max Planck Institute for Astronomy (MPIA) in Heidelberg.

Either way, the jet of the active galaxy OJ 287 is one of the best understood jets so far and will certainly be used to decipher other extragalactic jets as well. It might even help to further unravel the enigmatic activity of supermassive black holes.