The paper is freely accessible for one month, starting on October 23, 11am CEST.

A team of scientists from the `International Pulsar Timing Array’ consortium, led by researchers from the Max Planck Institute for Radio Astronomy in Bonn, Germany, has used pulsar timing data to measure the masses of the dwarf-planet Ceres and other asteroids. The result for the mass of Ceres is 1.3% of the mass of the Earth’s moon. The team has also measured the masses of the major planets of the solar system with much improved precision than a past study and demonstrated how pulsar-timing data can be used to explore unknown massive objects orbiting the Sun.

The results are presented online as refereed publication in the “Monthly Notices of the Royal Astronomical Society”. 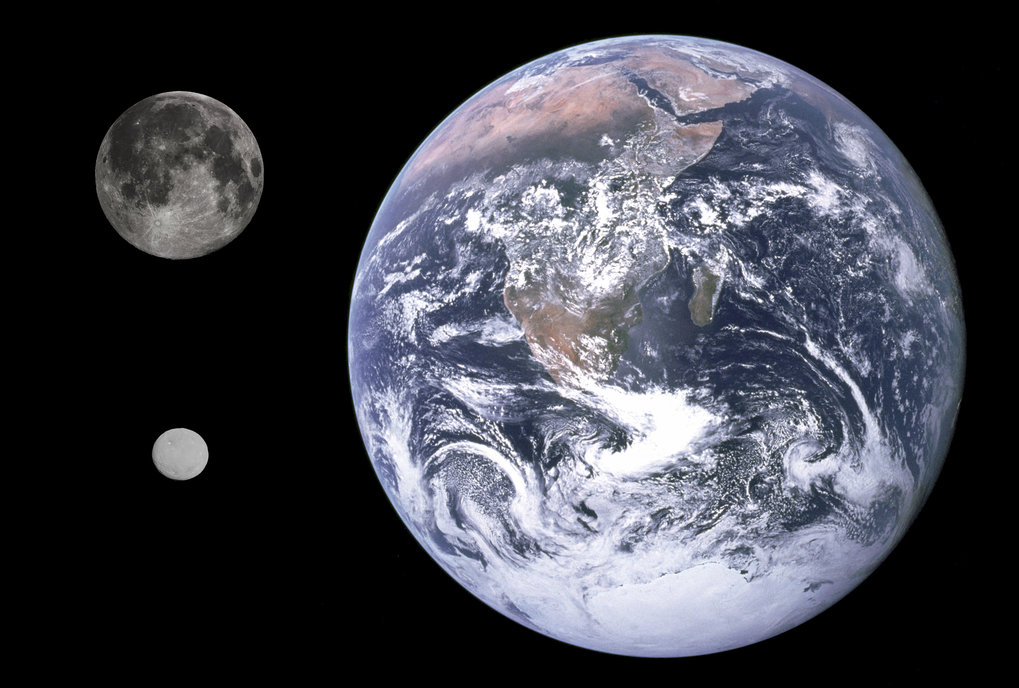 Size comparison of Earth, Moon and dwarf planet Ceres. The analysis from pulsar timing observations results in 4.7×10-10 times the solar mass, or 1.3 % of the mass of the moon for the mass of Ceres.

Size comparison of Earth, Moon and dwarf planet Ceres. The analysis from pulsar timing observations results in 4.7×10-10 times the solar mass, or 1.3 % of the mass of the moon for the mass of Ceres.

Solar system bodies can be weighed based on corrections astronomers make to signals from pulsars, small spinning stars that emit regular ‘flashes’ of radio waves. This technique, which was first published in 2010 by a team of researchers led by David Champion, now at the Max Planck Institute for Radio Astronomy (MPIfR), relies on the precise timing of signals from an array of millisecond pulsars. Astronomers observe the beamed radiation millisecond pulsars emit as ‘flashing’, periodical signals, much like one would observe from a lighthouse. Unlike lighthouses, however, these celestial objects rotate with tremendous speeds, with periods down to a few milliseconds, and are the most stable rotators known in the Universe. The largest radio telescopes are needed to resolving these weak signals.

“Using sophisticated models of their rotation we can predict the arrival time of the pulses of millisecond-pulsars to within a couple hundreds of nanoseconds over decades. This allows us to use them as accurate celestial clocks for a number of applications”, says Nicolas Caballero of the MPIfR, now working at the Kavli Institute for Astronomy and Astrophysics at Peking University, the leading author of the publication.

The motion of the Earth around the Sun makes it complicated to directly use the recorded pulse times-of-arrival at the telescope. Astronomers circumvent this problem by recalculating the times-of-arrival to a common reference frame, namely the centre of mass of the entire solar system, the so-called “the solar-system barycentre”.

“We rely on the work of our colleagues working in planetary astronomy, which uses a wealth of data, including data from spacecraft fly-bys, to create solar-system ephemerides that describes orbits of the planets, moons and asteroids”, says Nicolas Caballero.

If the ephemeris uses an incorrect mass this would result in an offset in the location of the barycentre and, in turn, periodic delays and advances in the expected arrival time of pulses from pulsars.

Using the latest published data by the ‘International Pulsar Timing Array’ (IPTA), pulsar astronomers have managed to improve the general sensitivity to such mass errors by an order of magnitude by comparison to the original study in 2010.

At the distance of the asteroid belt lying between Mars and Jupiter, the data are sensitive to masses of just 0.0003% of the Earth’s mass.

“If someone were to remove from Jupiter a mass equivalent to just about a tenth of the Earth’s oceans, we would start to see periodic oscillations in our IPTA data”, says Yanjun Guo, student at the Kavli Institute in Beijing and co-author of the paper. “This has allowed us to independently measure the mass of the most massive objects in the asteroid belt”, she continues.

Ceres, recently reclassified as a dwarf planet, is the most massive object in the asteroid belt. The analysis determined its mass to be 4.4 × 10-10 times the solar mass or only 1.3% of the mass of the Moon. The precision is only an order of magnitude below the current best estimates. The study presents such mass measurements for another four asteroids.

“Being able to probe the masses of Ceres and massive asteroids shows the improvements in precision and sensitivity of our observations”, says David Champion.

While spacecraft like NASA’s Dawn which is now providing in-situ measurements of the
gravity fields of Ceres and the asteroid Vesta can further improve the solar system ephemeris,
pulsar timing results will also continue to improve over time, both due to increased data precision that new radio telescopes will offer, and due to the extended time-span of the accumulated data sets.

“The current data set is about two decades long, and is the product of painstaking and uninterrupted work over many decades. The work of hundreds of scientists and engineers is behind the continued success of pulsar timing research”, explains Michael Kramer, head of the Fundamental Physics in Radio Astronomy research department at MPIfR and also co-author of the paper.

The study went beyond measuring the mass of known planets and asteroids. Implementing a method published earlier in an article led by Yanjun Guo, the international consortium searched for unknown masses which are unmodelled by the ephemeris and placed upper limits on the mass of any such object possibly in orbit around the Sun.

“It is a pilot study and we only considered unknown bodies in unperturbed, eccentric orbits. Nevertheless, it shows the exciting possibilities that pulsar timing offers to study the solar system, and impose restrictions on the parameters of theoretically proposed objects, from anything ranging from Planet Nine, to dark matter in the solar neighbourhood”, concludes Yanjun Guo.