The nearby, giant radio galaxy M87 hosts a supermassive black hole (BH) and is well-known for its bright jet dominating the spectrum over ten orders of magnitude in frequency. Due to its proximity, jet prominence, and the large black hole mass, M87 is the best laboratory for investigating the formation, acceleration, and collimation of relativistic jets. A research team led by Silke Britzen from the Max Planck Institute for Radio Astronomy in Bonn, Germany, has found strong indication for turbulent processes connecting the accretion disk and the jet of that galaxy providing insights into the longstanding problem of the origin of astrophysical jets. 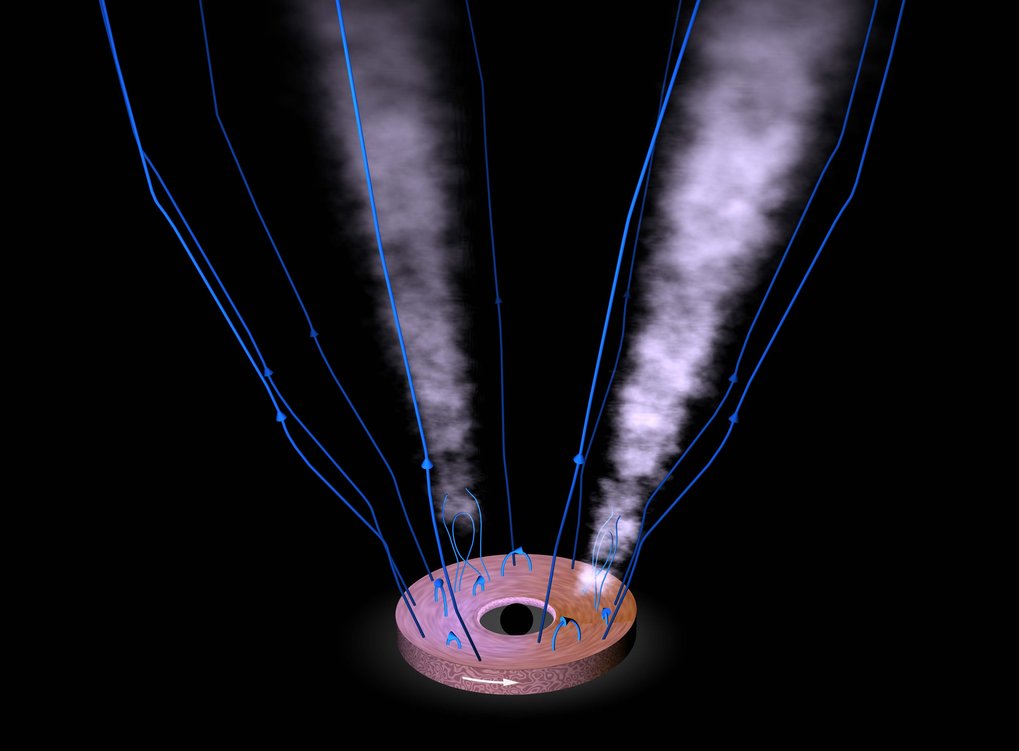 Schematic illustration of the turbulent mass injection process from the accretion disk of a supermassive black hole into ... [more]

Schematic illustration of the turbulent mass injection process from the accretion disk of a supermassive black hole into a global helical magnetic field.

Schematic illustration of the turbulent mass injection process from the accretion disk of a supermassive black hole into a global helical magnetic field.

Supermassive black holes form some of the most enigmatic phenomena in astrophysics. Their enormous energy output is supposed to be generated by the transformation of gravity into radiation.

Active black holes produce radiation via accretion of matter forming an accretion disk surrounding the central machine. A clear signpost of actively accreting massive black holes in the central cores of galaxies are enormous jets reaching out from the galaxies centers to scales of megaparsec and thus far beyond the optically visible galaxy.

M87, the central galaxy of the Virgo cluster, is at a distance of only 17 Mpc (corresponding to 50 million light years). It is the second closest active galactic nucleus (AGN), harboring an active black hole of six billion (6 x 10^9) solar masses in its centre. M87 was the first galaxy where a jet could be identified. It was found in optical observations at the Lick observatory almost 100 years ago ("a curious straight ray ... apparently connected with the nucleus by a thin line of matter", Heber Curtis, 1918).

The jet of M87 is one of the most thoroughly studied. It shows up across the electromagnetic spectrum from radio to X-ray wavelengths. M87 was also the first radio galaxy detected at highest gamma-ray energies in the TeV range.

Despite the wealth of observational material, the connection between the accreting black hole and the radiating jet is not known so far. The research team addressed this question by investigating interferometric radio observations of M87 with the VLBA network connecting radio telescopes across the United States from Hawaii to the Virgin Islands. The observations at 15 GHz (or 2 cm wavelength) provide an angular resolution of 0.6 mas (milli-arcseconds). At a distance of 17 Mpc this corresponds to 0.05 pc or 84 Schwarzschild radii only.

More than a hundred jets of active black holes have been studied thoroughly, but only M87 allows to explore the immediate vicinity of the central black hole.

The radio data were obtained within the MOJAVE (Monitoring of Jets in Active galactic nuclei with VLBA Experiments) project. “We re-analyzed these data providing us with an insight into the complex processes connecting the jet and the accretion disk of M87”, says Silke Britzen from the Max Planck Institute for Radio Astronomy (MPIfR) in Bonn, the first author of the paper. “To our knowledge, this is the first time that processes related to the launching and loading of the jet can be investigated”. Fast turbulent processes involving magnetic reconnection phenomena, similar to those observed on much smaller scales on the surface of the Sun, provide the best explanation for the observed results (see Fig. 1).

“There are good reasons to think that the surface of the accretion disk behaves similar to the surface of the Sun - bubbling hot gas with ongoing magnetic activity such as reconnection and flares”, adds Christian Fendt from the Max Planck Institute for Astronomy (MPIA) in Heidelberg, co-author in the team and an expert for jet-launching phenomena.

While close to the disk surface the small-scale magnetic structures dominate the mass loading of the jet, over long distances only the global helical magnetic field structure survives and governs the jet motion.

In the future, observations at higher frequencies and thus better resolution in the framework of the Event Horizon Telescope (EHT) project will allow to approach supermassive black holes even further. “There are only two targets which give us a chance to image the event horizon showing up as a shadow in the radio observations”, concludes Andreas Eckart from Cologne University. “The central black holes of M87 and our galaxy, the Milky Way, are very different in activity and mass, but also in distance. In both objects, however, the black hole subtends a similar angle on the sky and thus they cover similar portions of the image by a dark shadow.”  Vladimir Karas (Astronomical Institute of the Czech Academy of Sciences) emphasizes that the new observational evidence for M87 can be seen as basis for follow-up work, both observational and theoretical. The immediate vicinity of the black hole is surrounded by a very interesting region called ergosphere, which however stays below the resolution limit of current telescopes.

The observations within the EHT project providing the highest angular resolution in astronomy just took place in the first two weeks of April 2017. The results from these observations could help to further refine the model presented in the paper and, more generally, our understanding of the connection between jets and supermassive black holes. 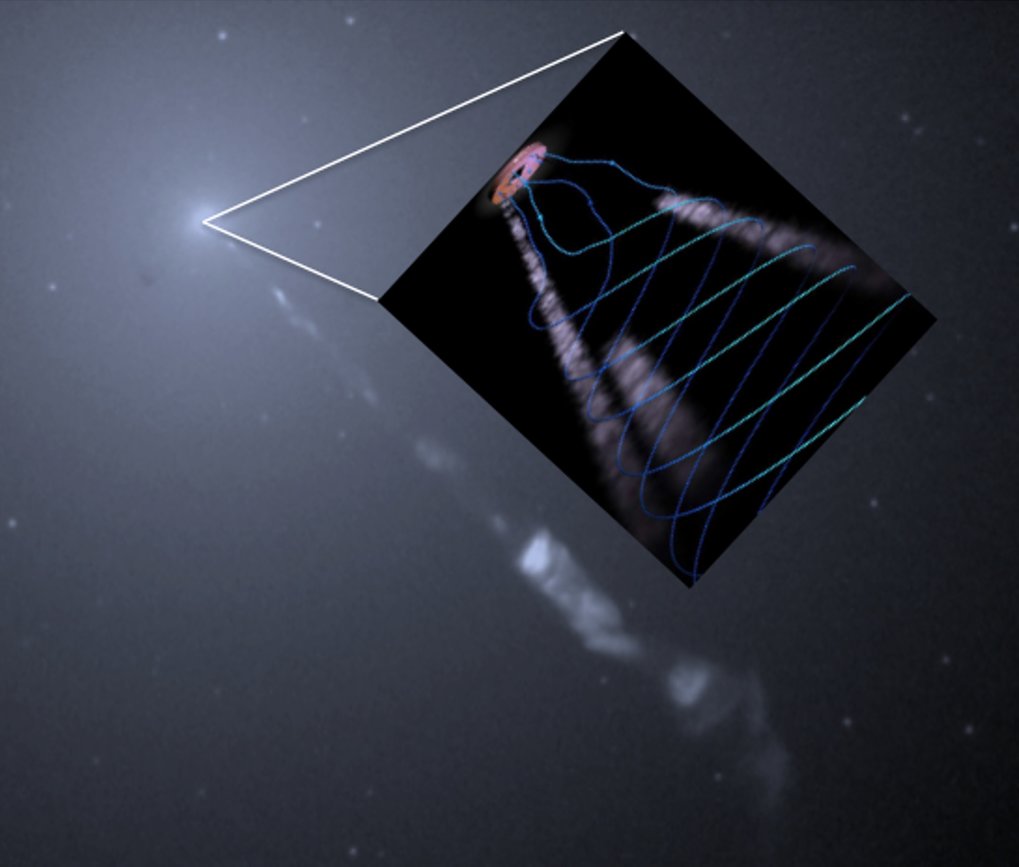 [less]
Hubble Space Telescope observations of the M87 jet with an inlay (schematic illustration) showing the central region where the jet is launched in turbulent processes and guided by a large-scale magnetic field.

The Schwarzschild radius is defined as the radius of a sphere such that, if all its mass was compressed within that radius, the escape velocity from the surface of the sphere would equal the speed of light. The radius is named after Karl Schwarzschild who, in 1916, obtained the first exact solution to Einstein’s field equations for a non-rotating, spherically symmetric object.