Nearly 10 billion years ago in a galaxy known as PKS B1424-418, a dramatic explosion occurred. Light from this blast began arriving at Earth in 2012. Now, an international team of astronomers, including scientists from the Max Planck Institute for Radio Astronomy in Bonn, have shown that a record-breaking neutrino seen around the same time likely was born in the same event. The results are published in "Nature Physics". 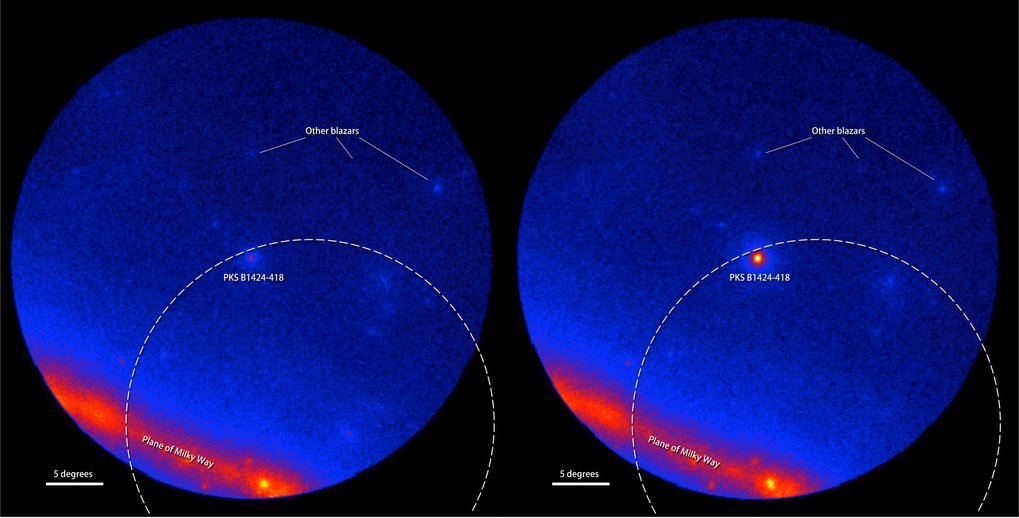 Fermi LAT images showing the gamma-ray sky around the blazar PKS B1424-418. Brighter colors indicate greater numbers of gamma rays. The dashed arc marks part of the source region established by IceCube for the Big Bird neutrino (50-percent confidence level). Left: An average of LAT data centered on July 8, 2011 covering 300 days when the blazar was inactive. Right: An average of 300 active days centered on Feb. 27, 2013, when PKS B1424-418 was the brightest blazar in this part of the sky.

Fermi LAT images showing the gamma-ray sky around the blazar PKS B1424-418. Brighter colors indicate greater numbers of gamma rays. The dashed arc marks part of the source region established by IceCube for the Big Bird neutrino (50-percent confidence level). Left: An average of LAT data centered on July 8, 2011 covering 300 days when the blazar was inactive. Right: An average of 300 active days centered on Feb. 27, 2013, when PKS B1424-418 was the brightest blazar in this part of the sky.

Neutrinos are the fastest, lightest and most unsociable understood fundamental particles, and scientists are just now capable of detecting high-energy ones arriving from deep space. The present work provides the first plausible association between a single extragalactic object and one of these cosmic neutrinos.

Although neutrinos far outnumber all the atoms in the universe, they rarely interact with matter, which makes detecting them quite a challenge. But this same property lets neutrinos make a fast exit from places where light cannot easily escape -- such as the core of a collapsing star -- and zip across the universe almost completely unimpeded. Neutrinos can provide information about processes and environments that simply aren't available through a study of light alone.

Recently, the IceCube Neutrino Observatory at the South Pole found first evidence for a flux of extraterrestrial neutrinos, which was named the Physics World breakthrough of the year 2013. To date, the science team of IceCube Neutrino has announced about a hundred very high-energy neutrinos and nicknamed the most extreme events after characters on the children's TV series "Sesame Street." On Dec. 4, 2012, IceCube detected an event known as Big Bird, a neutrino with an energy exceeding 2 quadrillion electron volts (PeV). To put that in perspective, it's more than a million million times greater than the energy of a dental X-ray packed into a single particle thought to possess less than a millionth the mass of an electron. Big Bird was the highest-energy neutrino ever detected at the time and still ranks second.

Where did it come from? The best IceCube position only narrowed the source to a patch of the southern sky about 32 degrees across, equivalent to the apparent size of 64 full moons. “It’s like a crime scene investigation”, says lead author Matthias Kadler, a professor of astrophysics at the University of Würzburg in Germany, “The case involves an explosion, a suspect, and various pieces of circumstantial evidence.”

Starting in the summer of 2012, NASA’s Fermi satellite witnessed a dramatic brightening of PKS B1424-418, an active galaxy classified as a gamma-ray blazar. An active galaxy is an otherwise typical galaxy with a compact and unusually bright core. The excess luminosity of the central region is produced by matter falling toward a supermassive black hole weighing millions of times the mass of our sun. As it approaches the black hole, some of the material becomes channeled into particle jets moving outward in opposite directions at nearly the speed of light. In blazars one of these jets happens to point almost directly toward Earth.

During the year-long outburst, PKS B1424-418 shone between 15 and 30 times brighter in gamma rays than its average before the eruption. The blazar is located within the Big Bird source region, but then so are many other active galaxies detected by Fermi.

These radio images from the TANAMI project reveal the 2012-2013 eruption of PKS B1424-418 at a radio frequency of 8.4 GHz. The core of the blazar’s jet brightened by four times, producing the most dramatic blazar outburst TANAMI has observed to date.

These radio images from the TANAMI project reveal the 2012-2013 eruption of PKS B1424-418 at a radio frequency of 8.4 GHz. The core of the blazar’s jet brightened by four times, producing the most dramatic blazar outburst TANAMI has observed to date.

The scientists searching for the neutrino source then turned to data from a long-term observing program named TANAMI. Since 2007, TANAMI has routinely monitored nearly 100 active galaxies in the southern sky, including many flaring sources detected by Fermi. Three radio observations between 2011 and 2013 cover the period of the Fermi outburst. They reveal that the core of the galaxy's jet had been brightening by about four times. “No other of our galaxies observed by TANAMI over the life of the program has exhibited such a dramatic change”, explains Eduardo Ros, from the Max Planck Institute for Radio Astronomy (MPIfR) in Bonn, Germany.

Within their jets, blazars are capable of accelerating protons to relativistic energies. Interactions of these protons with light in the central regions of the blazar can create pions. When these pions decay, both gamma rays and neutrinos are produced. "We combed through the field where Big Bird must have originated looking for astrophysical objects capable of producing high-energy particles and light," says coauthor Felicia Krauß, a doctoral student at the University of Erlangen-Nürnberg in Germany. "There was a moment of wonder and awe when we realized that the most dramatic outburst we had ever seen in a blazar happened in just the right place at just the right time."

In a paper published Monday, April 18, in Nature Physics, the team suggests the PKS B1424-418 outburst and Big Bird are linked, calculating only a 5-percent probability the two events occurred by chance alone. Using data from Fermi, NASA’s Swift and WISE satellites, the LBA and other facilities, the researchers determined how the energy of the eruption was distributed across the electromagnetic spectrum and showed that it was sufficiently powerful to produce a neutrino at PeV energies.

"Taking into account all of the observations, the blazar seems to have had means, motive and opportunity to fire off the Big Bird neutrino, which makes it our prime suspect," explains Matthias Kadler.

Francis Halzen, the principal investigator of IceCube at the University of Wisconsin–Madison, and not involved in this study, thinks the result is an exciting hint of things to come. "IceCube is about to send out real-time alerts when it records a neutrino that can be localized to an area a little more than half a degree across, or slightly larger than the apparent size of a full moon," he says. "We're slowly opening a neutrino window onto the cosmos."

"This study demonstrates the vital importance of classical astronomical observations in an era when new detection methods like neutrino observatories and gravitational-wave detectors open new but unknown skies", concludes Anton Zensus, director at MPIfR and head of its Radio Astronomy/VLBI research department, also a coauthor of the study.

TANAMI is a multiwavelength monitoring program of active galaxies in the Southern sky. It includes regular radio observations using the Australian Long Baseline Array (LBA) and associated telescopes in Chile, South Africa, New Zealand and Antarctica. When networked together, they operate as a single radio telescope more than 6,000 miles across and provide a unique high-resolution look into the jets of active galaxies.

The IceCube Neutrino Observatory, built into a cubic kilometer of clear glacial ice at the South Pole, detects neutrinos when they interact with atoms in the ice. This triggers a cascade of fast-moving charged particles that emit a faint glow, called Cerenkov light, as they travel, which is picked up by thousands of optical sensors strung throughout IceCube. Scientists determine the energy of an incoming neutrino by the amount of light its particle cascade emits.

NASA's Fermi Gamma-ray Space Telescope is an astrophysics and particle physics partnership, developed in collaboration with the U.S. Department of Energy and with important contributions from academic institutions and partners in France, Germany, Italy, Japan, Sweden and the United States.

MPIfR scientists involved in the project are Eduardo Ros and J. Anton Zensus.