RadioAstron Observations of the Quasar 3C273: A Challenge to the Brightness Temperature Limit

To the center of the brightest quasar

RadioAstron observations of the extremely hot heart of quasar 3C 273

The space mission RadioAstron employing a 10-meter radio telescope on board of the Russian satellite Spektr-R has revealed the first look at the finest structure of the radio emitting regions in the quasar 3C 273 at wavelengths of 18, 6, and 1.3 cm. These ground breaking observations have been made by an international research team with four of the largest radio telescopes on Earth, including the Effelsberg 100-meter antenna. They provide an unprecedented sensitivity to radio emission at angular scales as small as 26 microarcseconds. This resolution was achieved by combining signals recorded at all antennas and effectively creating a telescope of almost 8 Earth’s diameters in size.

The results are published in the current issue of the "The Astrophysical Journal". 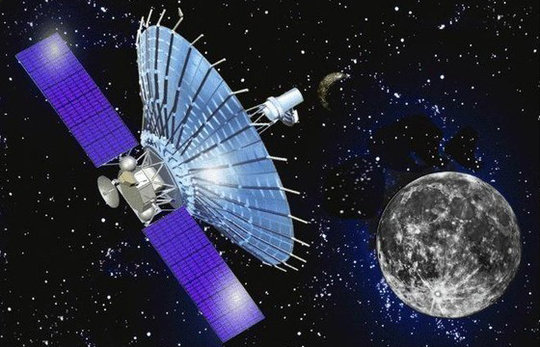 Artistic view of the 10-meter space radio telescope on board of the Russian satellite Spektr-R comprising the ... [more]

Artistic view of the 10-meter space radio telescope on board of the Russian satellite Spektr-R comprising the space-borne component of the RadioAstron mission.

Artistic view of the 10-meter space radio telescope on board of the Russian satellite Spektr-R comprising the space-borne component of the RadioAstron mission.

Supermassive black holes, containing millions to billions times the mass of our Sun, reside at the centers of all massive galaxies. These black holes can drive powerful jets that emit prodigiously, often outshining all the stars in their host galaxies. But there is a limit to how bright these jets can be – when electrons get hotter than about 100 billion degrees, they interact with their own emission to produce X-rays and Gamma-rays and quickly cool down.

Astronomers have just reported a startling violation of this long-standing theoretical limit in the quasar 3C 273. "We measure the effective temperature of the quasar core to be hotter than 10 trillion degrees!" comments Yuri Kovalev (Astro Space Center, Lebedev Physical Institute, Moscow, Russia), the RadioAstron project scientist. “This result is very challenging to explain with our current understanding of how relativistic jets of quasars radiate."

To obtain these results, the international team used the Earth-to-Space Interferometer RadioAstron. The interferometer consists of an orbiting radio telescope working together with the largest ground telescopes:  the 100-meter Effelsberg Telescope, the 110-m Green Bank Telescope, the 300-m Arecibo Observatory, and the Very Large Array. Operating together, these observatories provide the highest direct resolution ever achieved in astronomy, thousands of times finer than the Hubble Space Telescope.

“The fact  that RadioAstron has measured extreme brightness temperatures already in several objects, including the recently reported observations of BL Lacertae, these measurements indeed point out to new underlying physics behind the energetic sources of radiation in quasars”, states Andrei Lobanov, the coordinator of RadioAstron activities at the Max Planck Institute for Radio Astronomy (MPIfR) in Bonn, Germany.

However, the incredibly high temperatures were not the only surprise the RadioAstron team has found in 3C 273. The team also discovered an effect never seen before in an extragalactic source: the image of 3C 273 has substructure caused by the effects of peering through the dilute interstellar material of the Milky Way.

"Just as the flame of a candle distorts an image viewed through the hot turbulent air above it, the turbulent plasma of our own galaxy distorts images of distant astrophysical sources, such as quasars," explains Michael Johnson of the Harvard-Smithsonian Center for Astrophysics (CfA), who led the scattering study. He continues: "These objects are so compact that we had never been able to see this distortion before. The amazing angular resolution of RadioAstron gives us a new tool to understand the extreme physics near the central supermassive black holes of distant galaxies and the diffuse plasma pervading our own galaxy."

“Our research team has been working for a long time on extending the VLBI technique to space antennas reaching baselines much larger than our Earth”, concludes Anton Zensus, director at the MPIfR and head of its Radio Astronomy/VLBI research department.  “The new discoveries on 3C 273 are a wonderful example for our successful cooperation within the RadioAstron project.” 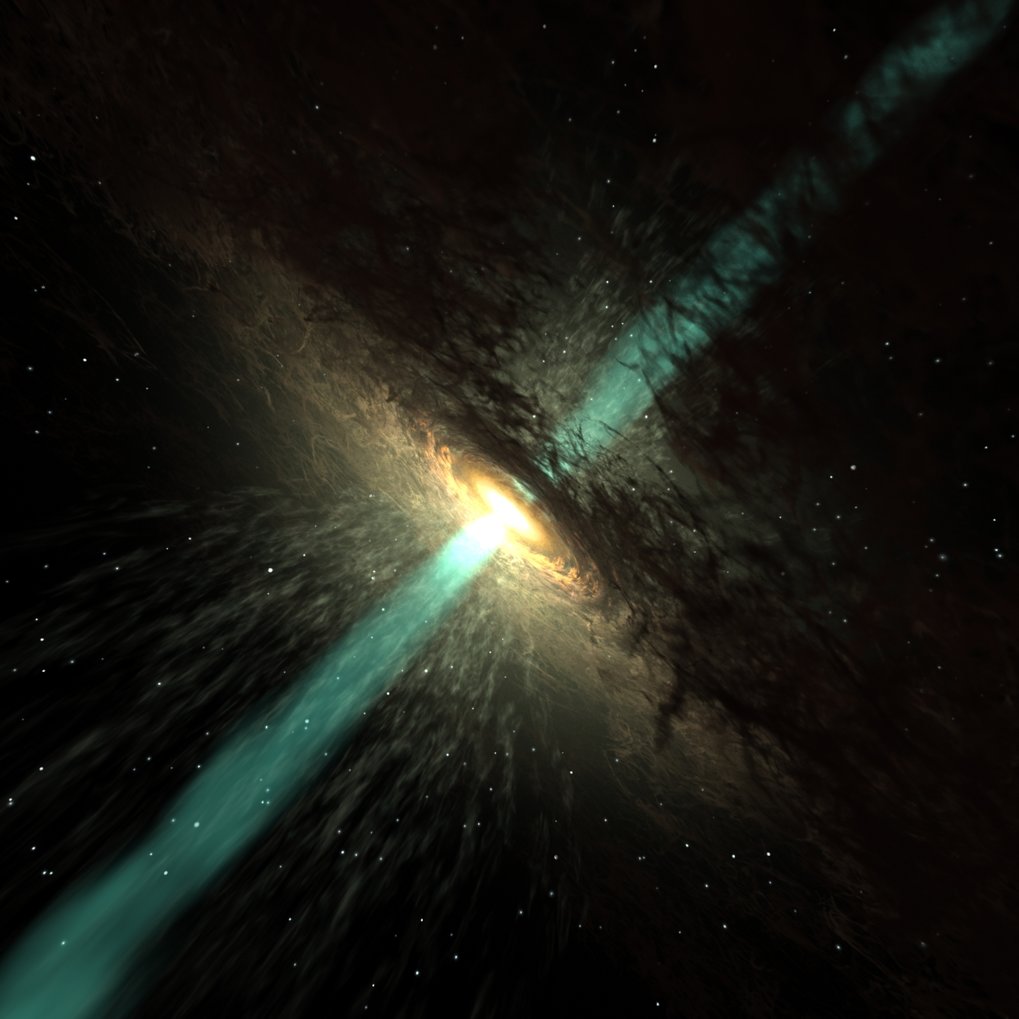 Artistic view of a quasar; a super-massive black hole in the center is being fed by a disk of gas and dust, producing ... [more]

Artistic view of a quasar; a super-massive black hole in the center is being fed by a disk of gas and dust, producing collimated jets of ejected material moving at nearly the speed of light.

Artistic view of a quasar; a super-massive black hole in the center is being fed by a disk of gas and dust, producing collimated jets of ejected material moving at nearly the speed of light.

The RadioAstron project is led by the Astro Space Center of the Lebedev Physical Institute of the Russian Academy of Sciences and the Lavochkin Scientific and Production Association under a contract with the Russian Federal Space Agency, in collaboration with partner organizations in Russia and other countries.

The Spektr-R antenna of RadioAstron is at an elliptical orbit around Earth reaching a maximum apogee distance of 350,000 km which would result in a virtual radio telescope of up to 27 times the Earth’s diameter.

This research is partly based on observations with the 100 m telescope of the MPIfR at Effelsberg.

3C 273 is a quasar (active galactic nucleus) in the direction to the constellation Virgo. With a magnitude of 12.9 it is the optically brightest quasar in the sky, its redshift of 0.158 corresponding to a distance of approximately 2.4 billion light years.

The quasar 3C 273 is one of the target stations of the “Galaxy walk” at the Effelsberg Radio Observatory. Scaled 1:5x1022, the Galaxy Walk runs from Milky Way and Andromeda Galaxy (50 cm apart) to the edge of the Universe. 3C 273 forms station no. 7. With a distance of  2,4 billion light years it shows up only 450 meters away from the start (at a total length of 2.6 km for the Galaxy walk) .