Hot Science of the Cold Universe

The “Atacama Pathfinder Experiment” in Chile starts its second decade

During 10 years of operation, the Atacama Pathfinder Experiment (APEX) 12 m submillimeter telescope has significantly contributed to a wide variety of astronomy science areas, ranging from the discoveries of new interstellar molecules to large and deep imaging of the submillimeter sky, leading to insights into star formation from our Milky Way to distant starburst galaxies in the early Universe.

On the occasion of this anniversary, a celebration was held at the APEX base station in Sequitor, San Pedro de Atacama, including a visit to the APEX telescope at the Chajnantor plateau, 5100 m above sea level. 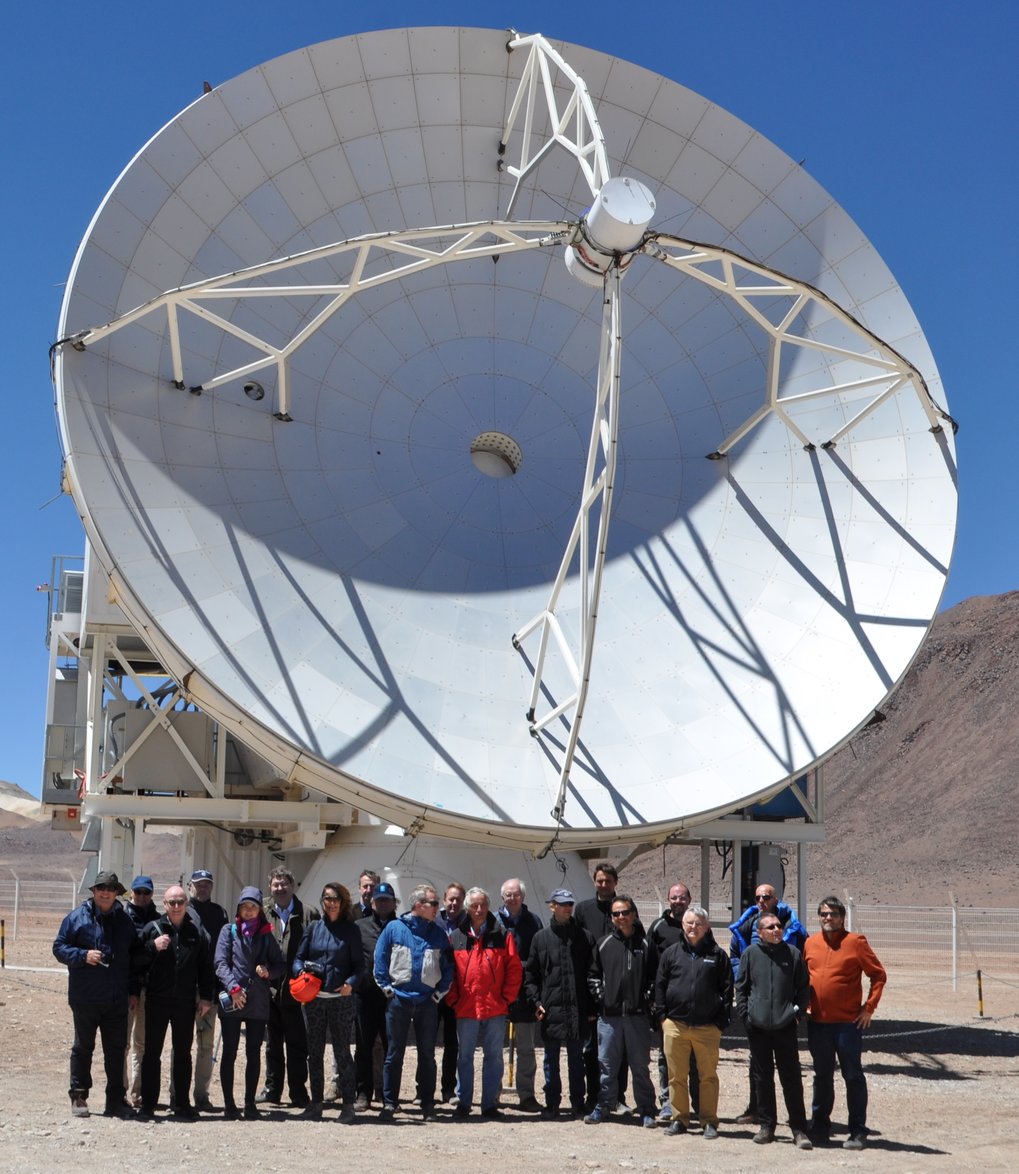 Guests of the event visiting the 12 m APEX telescope, 5100 m above sea level in the Chilean Atacama desert.

Guests of the event visiting the 12 m APEX telescope, 5100 m above sea level in the Chilean Atacama desert.

On January 25-26, the 10th anniversary of APEX was celebrated at the APEX base station in Sequitor, San Pedro de Atacama, at a better accessible altitude of only 2500 m above sea level. A number of special guests were present at the occasion, including the German ambassador in Chile, Rolf Schulze, the President of the Max-Planck-Gesellschaft, Prof. Martin Stratmann, and the Director General of the European Southern Observatory (ESO), Prof. Tim de Zeeuw. For the partners in the APEX collaboration, principal investigator Prof. Karl Menten and APEX project manager Dr. Rolf Güsten from the Max Planck Institute for Radio Astronomy (MPIfR) in Bonn, Germany, and Prof. John Conway, Director of the Swedish Onsala Space Observatory (OSO) were attending the event. Fig. 1 shows the group of visitors at the high-altitude APEX site.

“In designing and operating APEX, ESO, OSO and the Max-Planck-Society set a perfect example of how long-term international collaboration can push the limits in astronomy”, said Martin Stratmann, President of the Max-Planck-Gesellschaft. Within the last ten years, about 2000 scientists have used data obtained with APEX for their science projects, resulting in more than 500 publications. Major APEX results include the discovery of five new molecules in the interstellar medium and also large surveys like ATLASGAL (the “APEX Telescope Large Area Survey of the Galaxy”), or LESS (the “LABOCA Survey of the Extended Chandra Deep Field South”).  Both have used the Large APEX Bolometer Camera (LABOCA) to measure the star formation activity in the Milky Way and at early epochs of the Universe. The APEX telescope and its access to the southern sky, in particular the inner part of the Milky Way and the Magellanic Clouds, is visualized in Fig. 2.

"It's a great pleasure to celebrate a decade of astronomy with APEX, and ESO is very proud to be a member of this partnership. Not only is APEX an amazingly productive telescope in its own right, but it also wonderfully complements its more recent neighbour on Chajnantor, ALMA", said ESO’s Director General, Tim de Zeeuw.

The APEX project was initiated by Karl Menten, Director at the MPIfR and head of its Millimeter and Submillimeter Astronomy Research department. The outstanding personal commitment of Karl Menten and Rolf Güsten was honored by Martin Stratmann at the 10-year anniversary ceremony in Sequitor: “I am deeply impressed by the passion and dedication that has led to the design and installation of APEX in 2003. Right at the very beginning of operation, APEX had proven its significance in studying the southern celestial hemisphere.”   Indeed, Menten recalls: “Right from the start, APEX has delivered wonderful data. And now, after ten years of research, APEX continues its important role not only as a pathfinder, but also as a complementary instrument for both, the ALMA interferometer here at Chajnantor and for the airborne observatory SOFIA.”

"From the engineering point of view, APEX has been a big success and its performance surpassed our expectations right from the beginning", said Rolf Güsten. "Within the last ten years, we have continuously improved the performance of the telescope. Today the suite of state-of-the-art receivers and camera systems places the facility at the leading edge of submillimeter astronomy.” This continuous stream of innovative technology, constantly opening new scientific opportunities had always been an integral part of the project’s philosophy.

"The collaboration over the last ten years between three very different institutions has worked extremely well, each bringing its own strengths to the project. APEX has an exciting future, both doing its own unique science and in supporting ALMA observations", said John Conway, the Director of OSO.

With the official opening of the ALMA, the importance of APEX has even increased in providing the complementary instrument to the high-resolution interferometer in order to image the large scale structure of molecular clouds and to select the target sources for a detailed investigation. “Whatever can be detected with APEX, can be imaged with superb precision with ALMA”, explained Karl Menten. “APEX truly is a pathfinder!”  The importance of the telescope’s complementary role to ALMA’s mission was also stressed by Martin Stratmann: “Astronomy and astrophysics have always been core elements of our research portfolio. However, the size and diversity of experiments led to fundamental changes in the way we approach our questions in practice. Nowadays, breakthroughs demand for a large network of complementary telescopes and instruments. APEX’ role as a pathfinder shows how the Max-Planck-Gesellschaft can strike out in a new and promising direction.” 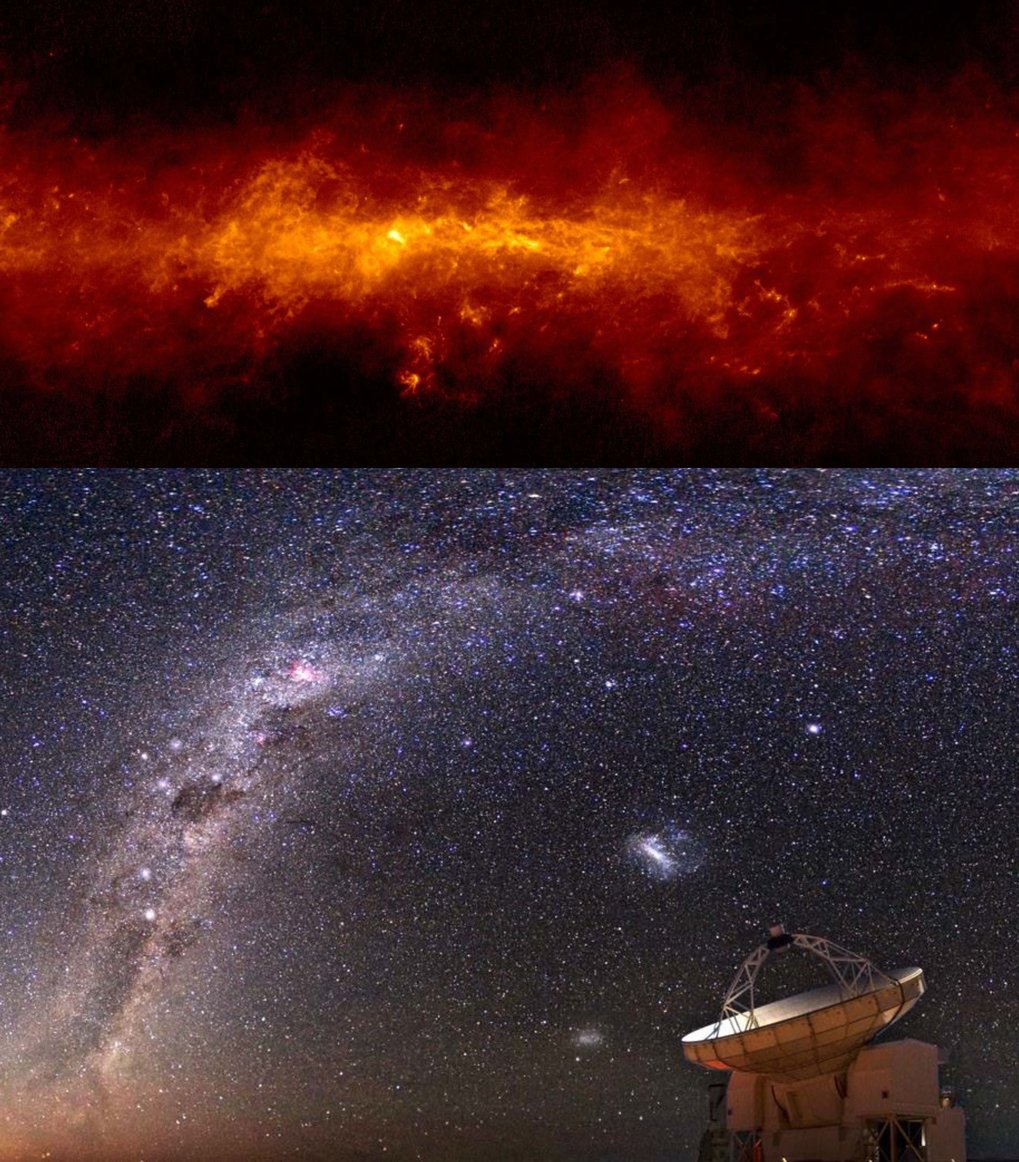 Central part of the Galactic plane as seen by the APEX LABOCA camera merged with large-scale images from the Planck ... [more]

Central part of the Galactic plane as seen by the APEX LABOCA camera merged with large-scale images from the Planck satellite (upper image). Southern part of the Milky Way including Southern Cross and the Eta Carina region (bright reddish nebula to the left and above the cross) and the two Magellanic Clouds (left of the telescope).

Central part of the Galactic plane as seen by the APEX LABOCA camera merged with large-scale images from the Planck satellite (upper image). Southern part of the Milky Way including Southern Cross and the Eta Carina region (bright reddish nebula to the left and above the cross) and the two Magellanic Clouds (left of the telescope).

The Atacama Pathfinder Experiment (APEX) is a collaboration between the Max Planck Institute for Radio Astronomy (MPIfR), Onsala Space Observatory (OSO), and the European Southern Observatory (ESO) to construct and operate a modified prototype antenna of ALMA (Atacama Large Millimetre Array) as a single dish on the Chajnantor plateau at an altitude of 5,100 metres above sea level (Atacama Desert, Chile). The telescope was manufactured by VERTEX Antennentechnik in Duisburg, Germany. The operation of the telescope is entrusted to ESO.