Almost 25,000 light years away, two dead stars, each more massive than our Sun, but only 20 kilometers in diameter, orbit one another in less than five hours. This unusual pair of extreme objects, known as neutron stars, was discovered by an international team of scientists – including researchers from the Max Planck Institute for Gravitational Physics and the Max Planck Institute for Radio Astronomy – and by volunteers from the distributed computing project Einstein@Home. Their find is the latest addition to a short list of only 14 known similar binary systems, and it also is the most massive of those. Double neutron star systems are important cosmic laboratories that enable some of the most precise tests of Einstein’s theory of general relativity. They also play an important role as potential gravitational-wave sources for the LIGO detectors. 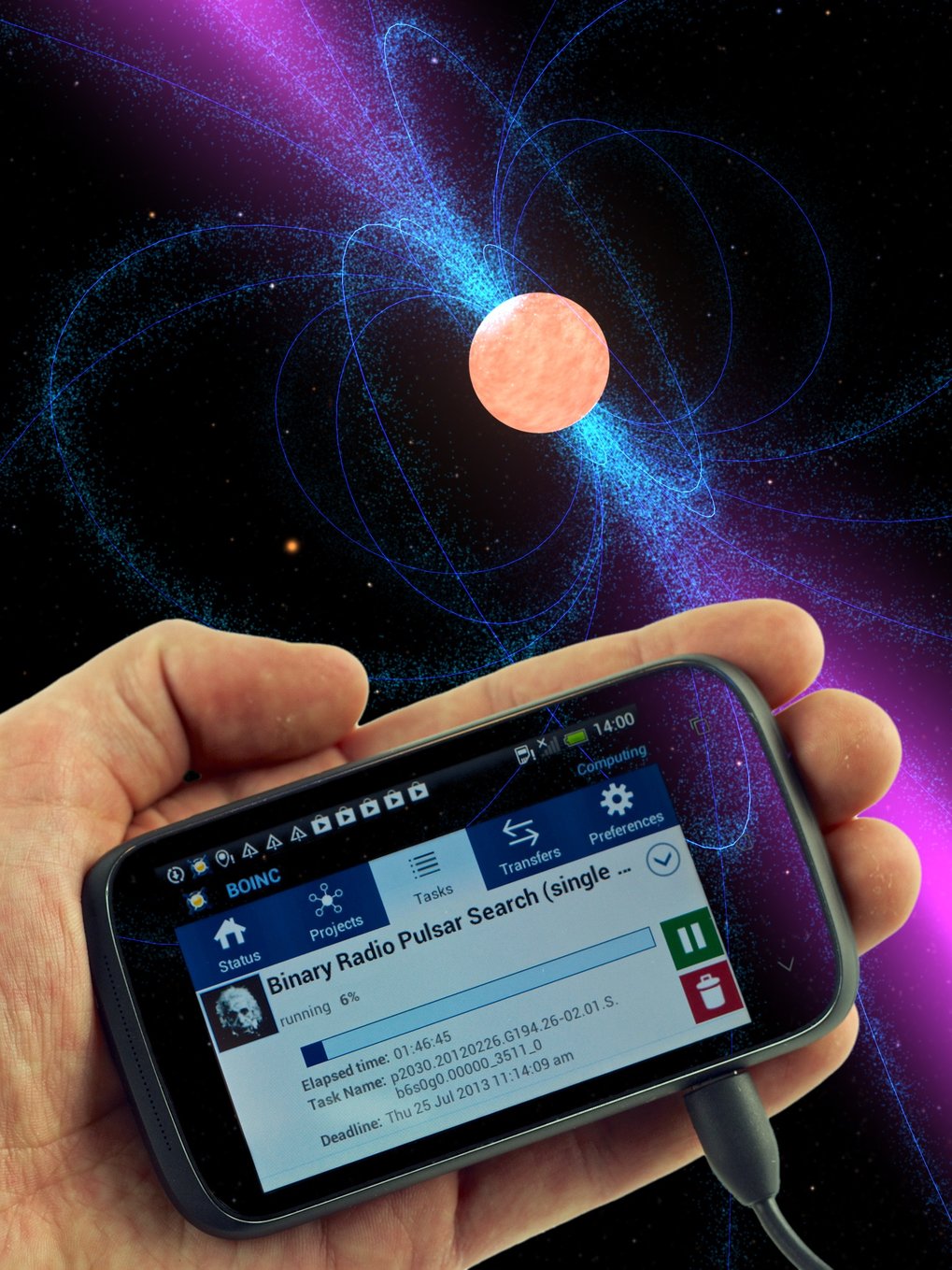 The Pulsar PSR J1913+1102 was found with the Einstein@Home project on the computers of two of the participants in this project, Uwe Tittmar from Germany and Gerald Schrader from the US.

The Pulsar PSR J1913+1102 was found with the Einstein@Home project on the computers of two of the participants in this project, Uwe Tittmar from Germany and Gerald Schrader from the US.

Neutron stars are the highly magnetized and extremely dense remnants of supernova explosions. Like a rapidly rotating cosmic lighthouse they emit beams of radio waves into space. If Earth happens to lie along one of the beams, large radio telescopes can detect the neutron star as a pulsating celestial source: a radio pulsar.

Most of the about 2500 known radio pulsars are isolated, i.e. spinning alone in space. Only 255 are in binary systems with a companion star, and only every 20th of those is in orbits with another neutron star.

“These rare double neutron star systems are unique laboratories for fundamental physics, enabling measurements that are impossible to obtain in any laboratory on Earth”, says Bruce Allen, director at the Max Planck Institute for Gravitational Physics in Hannover, director of Einstein@Home and co-author of the study published in The Astrophysical Journal. “That is why we need large telescopes like the Arecibo observatory and sensitive data analysis ‘machines’ like Einstein@Home to discover as many of these exciting objects as possible.”

The new discovery was made in data from the Arecibo radio telescope. The PALFA consortium (PALFA: “Pulsar Surveys with the Arecibo L-Feed Array”), an international team of scientists, conducts a survey of the sky with the observatory to find new radio pulsars. The PALFA survey so far has discovered 171 radio pulsars. The data are also analyzed by the Einstein@Home distributed computing project, which has made 31 of these discoveries.

Einstein@Home aggregates the computing power provided by more than 40,000 volunteers from all around the world on their 50,000 laptops, PCs, and smartphones. The project is one of the largest distributed volunteer computing projects, and its computing power of 1.7 PetaFlop/s puts it among the 60 largest supercomputers in the world.

After the initial discovery of the binary system by Einstein@Home in February 2012, the PALFA researchers observed the system repeatedly with the Arecibo telescope to precisely measure the orbit of the radio pulsar, which spins once every 27.2 milliseconds (37 times each second). Their observations showed that the object called PSR J1913+1102 (this name encodes a sky position, the pulsar’s celestial “address”) consists of two stars orbiting one another in a little less than five hours in a slightly elliptical orbit.

From measuring how the pulsar rotates slightly slower over time, the scientists could also infer its magnetic field to be a few billion times that of our Earth. This is relatively weak for a neutron star and indicates an episode of matter accretion from the companion star in the distant past. This accretion episode, however, would have circularized the orbit, too. The observed ellipticity of the orbit is testament of the companion exploding in a supernova and leaving behind a second neutron star. The kick of the supernova explosion did not disrupt the binary system but made its orbits elliptical. 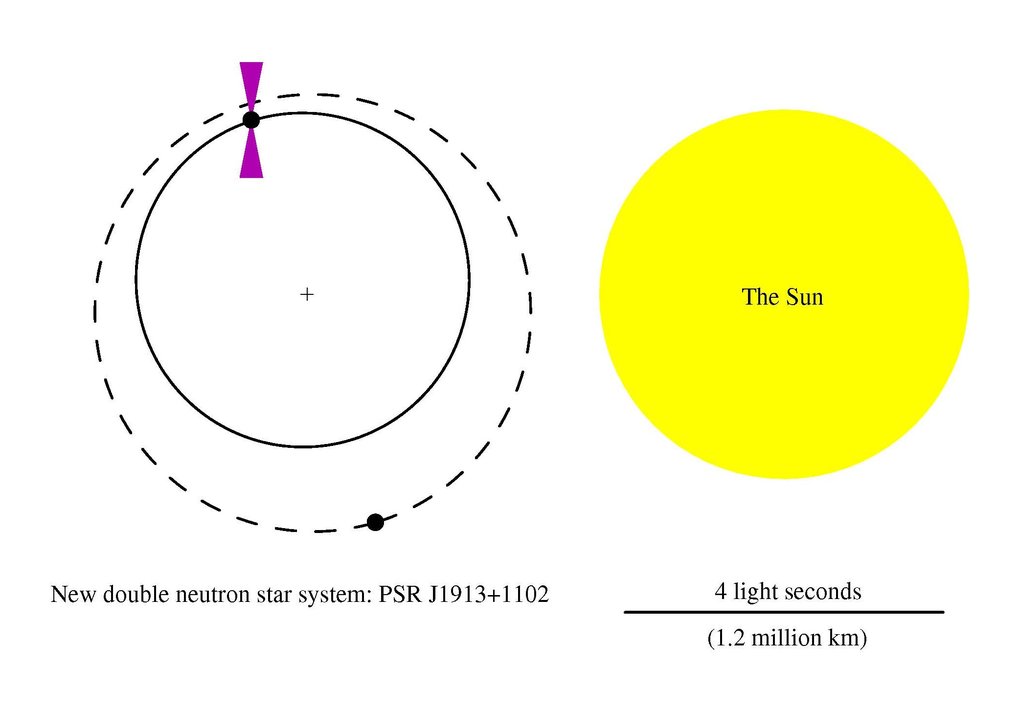 Orbits of the two components of the double neutron star system PSR J1913+1102. The size of the sun is shown in comparison.

Orbits of the two components of the double neutron star system PSR J1913+1102. The size of the sun is shown in comparison.

Moreover, the research team measured an effect of Einstein’s general theory of relativity in the binary system. Like the orbit of Mercury around our Sun, the elliptical orbit of the radio pulsar rotates over time. But while Mercury’s orbit rotates by only 0.0001 degrees per year, J1913+1102’s orbit rotates 47,000 times faster: a full 5.6 degrees each year. The magnitude of this effect, known as relativistic periastron advance, depends on the combined mass of the radio pulsar and its companion, thereby allowing a measurement of this quantity.

“With a total mass of 2.88 times that of our Sun, our discovery breaks the current record for the total mass of the known double neutron star systems”, says Dr. Paulo Freire, researcher at the Max Planck Institute for Radio Astronomy in Bonn. “We expect that the pulsar is heavier than the companion star, but with our current observations we cannot yet determine the individual masses of the pulsar and its neutron star companion. However, continued observations will enable this measurement.”

If the pulsar indeed turns out to be substantially more massive than the companion, this system will be significantly different from all the other known double neutron star systems. In that case, it promises to become one of the best known laboratories for testing theories of gravitation alternative to Einstein's theory of general relativity.

Since the companion star also is a neutron star, it might also be detectable as a radio pulsar – provided its radio beam also sweeps over the Earth. But that does not seem to be the case for J1913+1102. The researchers painstakingly searched all their data for radio pulsations from the companion – but in vain. They did not find any sign of radio emission from the companion.

As the neutron stars orbit one another, their orbits shrink because the system emits gravitational waves. Measurements of this effect might allow to determine the individual masses of both the pulsar and its companion. Researchers hope to learn more about the little-known stellar evolution of such binary systems and the unknown properties of matter at the density of an atomic nucleus.

Discoveries like this one are also interesting for the era of gravitational-wave astronomy that began in September 2015 with the first direct detection of gravitational waves. “Finding double neutron stars systems similar to J1913+1102 is useful for the gravitational-wave science community. It helps us better understand how often these systems merge, and how often Advanced LIGO might detect the signals of merging neutron stars in the future”, concludes Prof. Michael Kramer, director at the Max Planck Institute for Radio Astronomy.