Tight system of black holes in a distant galaxy

Astronomers have discovered three closely orbiting supermassive black holes in a galaxy more than 4 billion light years away. This is the tightest trio of black holes known to date and is remarkable since most galaxies have just one black hole, usually with a mass between 1 million to 10 billion times that of the Sun, at their centre. The discovery suggests that such closely packed supermassive black holes are far more common than previously thought.
An international research team, including Hans-Rainer Klöckner from the Max Planck Institute for Radio Astronomy in Bonn, Germany, performed VLBI (Very Long Baseline Interferometry) observations with radio telescopes at a number of frequencies to discover the inner two black holes of the triple system. The VLBI technique combines the signals from large radio antennas separated by up to 10. 000 kilometres to see details 50 times finer than that possible with the Hubble Space Telescope. In this project the Effelsberg 100m radio telescope took part in European VLBI network (EVN) observations covering two radio frequencies. 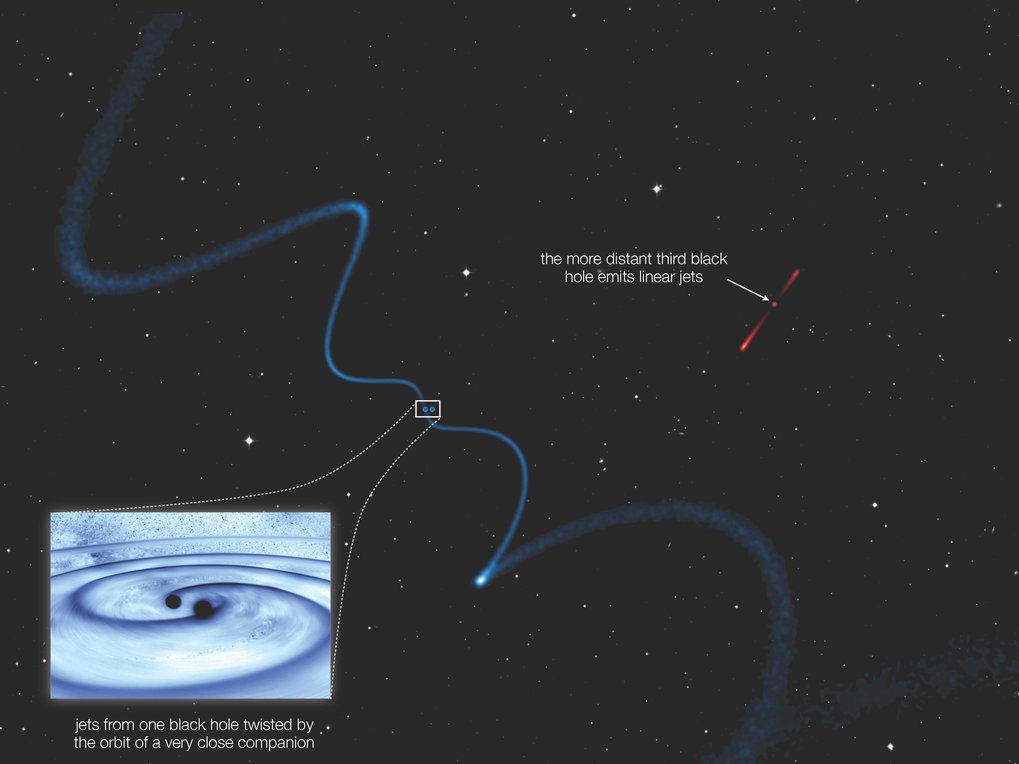 Galaxies are believed to evolve through merging and that should lead to multiple supermassive black holes in some of those galaxies at a given time. The source under investigation was found in the Sloan Digital Sky Survey (SDSS) and has the catalog number SDSS J1502+1115. It is a quasar, the nucleus of an active galaxy at a redshift of z = 0.39, corresponding to a distance of more than four billion light years. A triple black hole system has been identified in that source, with two tight companions separated by less than 500 light years.

"What remains extraordinary to me is that these black holes, which are at the very extreme of Einstein’s Theory of General Relativity, are orbiting one another at 300 times the speed of sound on Earth", says Roger Deane from the University of Cape Town/South Africa, the lead author of the paper. "Not only that, but using the combined signals from radio telescopes on four continents we are able to observe this exotic system one third of the way across the Universe. It gives me great excitement as this is just scratching the surface of a long list of discoveries that will be made possible with the Square Kilometre Array."

Such systems are important to understand for several reasons; in terms of galaxy evolution it is known that black holes influence how galaxies evolve, and understanding how often black holes themselves merge is key to this work. Furthermore, closely orbiting systems such as this are sources of gravitational waves in the Universe, if General Relativity is correct. Future radio telescopes such as the Square Kilometre Array (SKA) will be able to measure the gravitational waves from such systems as their orbits decrease.

At this point, very little is actually known about black hole systems that are so close to one another that they emit detectable gravitational waves. "This discovery not only suggests that close-pair black hole systems are much more common than previously expected, but also predicts that radio telescopes such as MeerKAT and African VLBI Network will directly assist in the detection and understanding of the gravitational wave signal", says Matt Jarvis from the Universities of Oxford and the Western Cape. "Further in the future the SKA will allow us to find and study these systems in exquisite detail, and really allow us gain a much better understanding of how black holes shape galaxies over the history of the Universe." 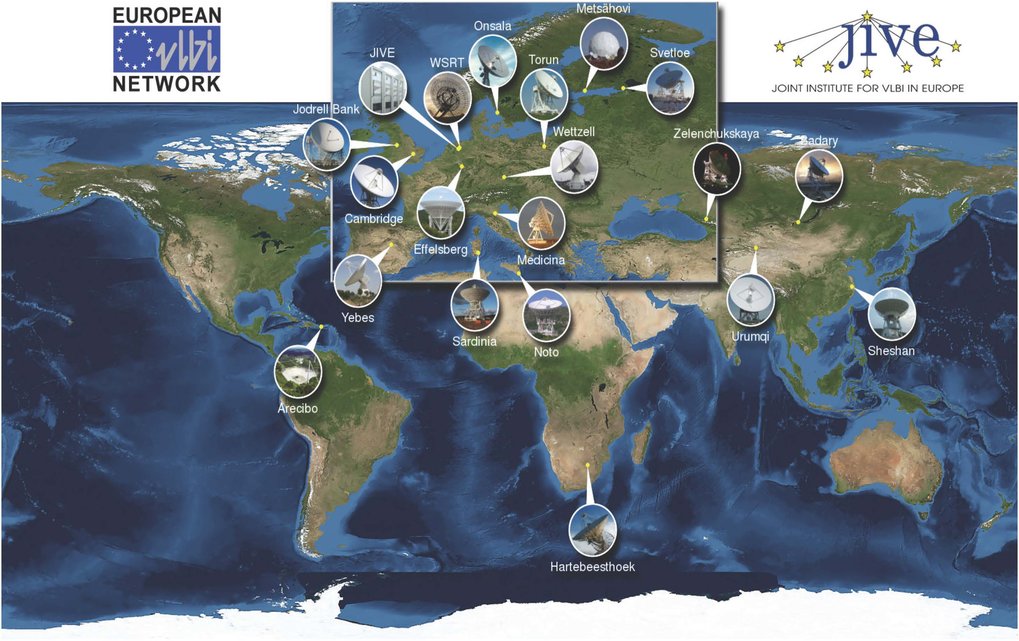 While the VLBI technique was essential to discover the inner two black holes (which are in fact the second closest pair of supermassive black holes known), Deane and co-authors have also shown that the binary black hole presence can be revealed by much larger scale features. The orbital motion of the black hole is imprinted onto its large jets, twisting them into a helical or corkscrew-like shape. So even though black holes may be so close together that our telescopes can’t tell them apart, their twisted jets may provide easy-to find pointers to them, much like using a flare to mark your location at sea. This may provide a way for sensitive future telescopes like MeerKAT and the SKA to find binary black holes with much greater efficiency.

"We have found the first needle in the 'middle age' Universe and I hope that we will find much more and even closer systems of this kind in the near future", concludes Hans-Rainer Klöckner from the Max Planck Institute for Radio Astronomy, a co-author of the paper. "Such close-binaries will not only show us how supermassive black holes could grow or how they could alternate our space time, they will also help us to understand the inner workings and the interplay between jets and the accretion disc surrounding black holes." This discovery is a prime example of how radio astronomy is done nowadays; it is an international and close collaboration accessing data products from various facilities distributed all over the globe.

The future will be bright with the SKA, the biggest radio telescope ever being built, enabling such discoveries in international collaborations and hopefully Germany will find a way to support this endeavor also in future and enable its scientists and engineers to participate in the SKA project.

The South African Government has made a major investment in astronomy, in funding what will the most sensitive radio telescope in the Southern Hemisphere, but also in the significant Human Capital Development programme. As someone who may not have become a professional astronomer without the support of these initiatives, Roger Deane is grateful to be able to produce internationally recognised research following the strong support received from SKA, South Africa (SA) and the SA Government. Four South African institutions are represented by the research team which is in itself a very positive signal for radio astronomy here. This demonstrates that South Africa has the scientific and technical expertise to be a world leader in this research area and contribute directly to gravitational wave experiments that will provide fundamental insights not only to astronomy, but also more broadly to physics.