The Age of Stellar Nurseries

An international research team led by scientists from the Coordinated Research Center (CRC) 956 “Conditions and Impact of Star Formation” at the University of Cologne has used observations made with the GREAT instrument on board the SOFIA aircraft observatory and the APEX telescope to date the core of an interstellar cloud that is forming a group of Sun-like stars. This work, to which scientists from the University of Helsinki as well as from the Max-Planck-Institutes for Radio Astronomy (MPIfR) and Extraterrestrial Physics (MPE) contributed, is published in this week’s issue of “Nature”. 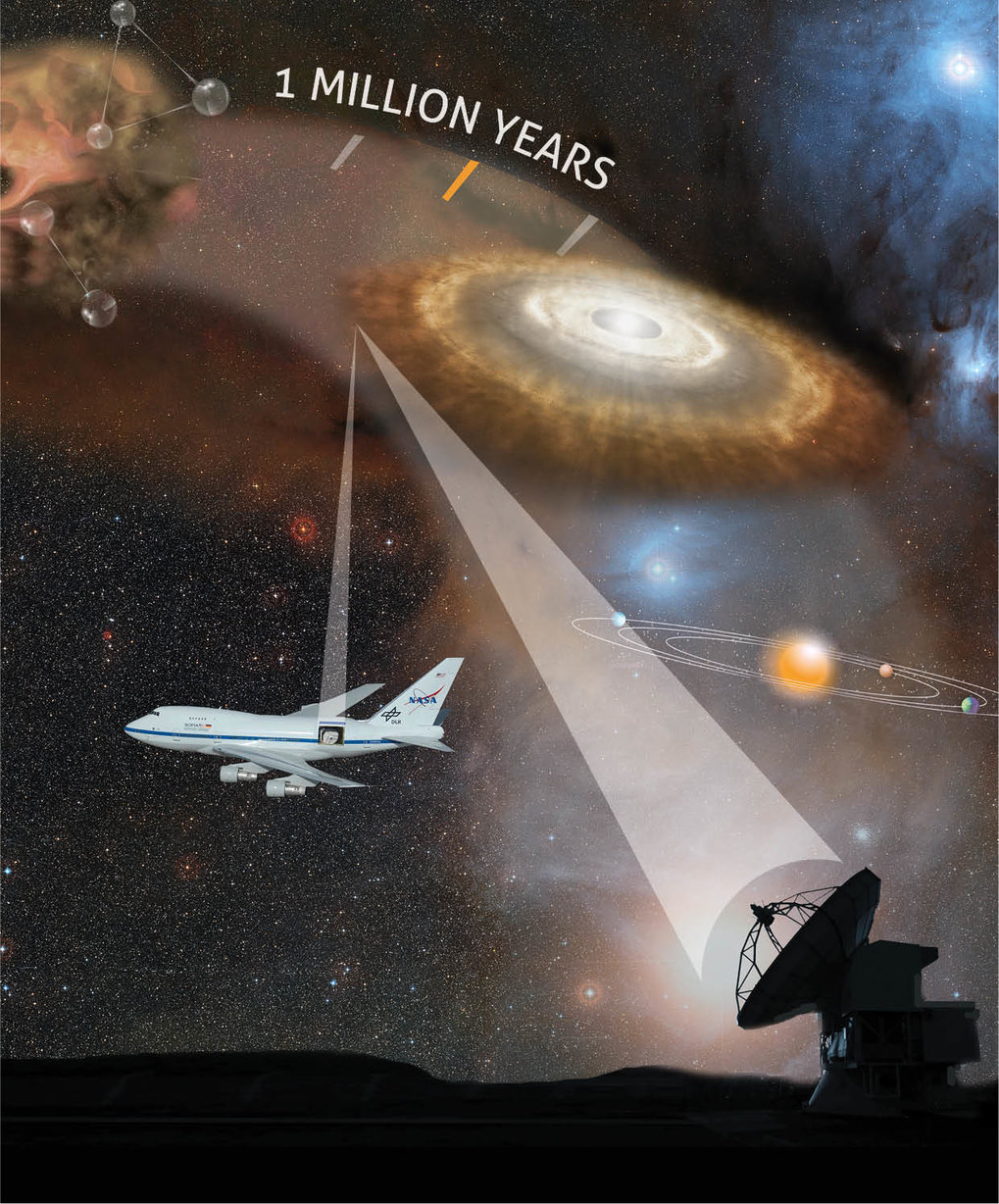 Stars like our Sun and their planetary systems are born inside clouds consisting of dust and molecular gas. Stellar evolution begins with the contraction of dense material in these stellar nurseries until an embryonic star, the protostar, is formed. How this collapse happens exactly, and on what timescales, is not very well understood. Is the gas “free-falling” towards the center due to gravity or is the collapse slowed down by other factors? “Since this process takes much longer than human history, it cannot just be followed as a function of time. Instead, one needs to find an internal clock that allows to read off the age of a particular star forming cloud,” says the leading author Sandra Brünken from the University of Cologne.

The hydrogen molecule (H2), by far the most abundant molecule in space, could act as such an internal, “chemical” clock. Molecular hydrogen exists in two different forms, called ortho and para, which correspond to different orientations of the spins of the two hydrogen nuclei. In the cold and dense molecular clouds out of which stars are formed, the relative abundance of these two forms changes continuously with time by chemical exchange reactions. Therefore the current abundance ratio observed is a measure of the time elapsed since the formation of H2, and thereby the molecular cloud itself. Unfortunately, H2 cannot be directly detected in the very cold interstellar “breeding grounds” of stars. However, H2D+, an ionized variant in which a deuteron particle is attached to the H2 molecule, can be observed. Indeed, the ortho and para forms of H2D+ emit and absorb at characteristic wavelengths, forming “spectral lines” that are observable with different telescopes. “We knew from our own laboratory experiments and from theory that H2D+ has a very close chemical relation to H2,” says Stephan Schlemmer from the University of Cologne who proposed the observations. “For the first time we could now observe both variants of H2D+, which allowed us to indirectly determine the ratio of ortho H2 to para H2. Reading this chemical clock we find an age of at least one million years for the parental cloud that is right now giving birth to Sun-like stars.” This result is questioning theories of rapid star formation.

The astronomical observations were very challenging. The relevant spectral line of para-H2D+ lies in the far infrared wavelength range (at 219 µm), where the Earth’s atmosphere absorbs most of the radiation. “Its first unambiguous detection was only possible due to the unique capabilities of the GREAT (German REceiver for Astronomy at Terahertz Frequencies) instrument on board the SOFIA (Stratospheric Observatory for Infrared Astronomy) aircraft,” says Jürgen Stutzki, whose group at the University of Cologne is involved in the development of GREAT. SOFIA is a joint project between NASA and the DLR (Deutsches Zentrum für Luft- und Raumfahrt) carrying a 2.7 meter diameter telescope as high as 13.7 km, above the atmosphere’s absorbing layers. The team also observed the corresponding rotational line of ortho-H2D+ at mm-wavelengths with the ground-based APEX (Atacama Pathfinder Experiment) telescope located in the Chilean Andes at an altitude of 5100 m. APEX Principal Investigator, the MPIfR’s Karl Menten points out that “It’s great to see the synergy between both telescopes!”

The age of this star-forming cloud, which is located in the Ophiuchus constellation at a distance of around 400 light years, was determined by comparing the data from the telescopes with extensive computer simulations of the chemistry that is changing with time. “The simulations allow us a detailed look at the movement of our H2D+ clock,” explains Jorma Harju of the University of Helsinki. “We find that our new chemical clock is more precise than any of those used previously. Even more importantly, it keeps running when other clocks have already stopped working.” The team is confident that their new method will help to date other stellar birthplaces.

The GREAT far-infrared spectrometer is mounted to the telescope flange, inside the pressurized cabin. During ... [more]

The GREAT far-infrared spectrometer is mounted to the telescope flange, inside the pressurized cabin. During observations GREAT rotates ±20 degrees from the vertical.

The GREAT far-infrared spectrometer is mounted to the telescope flange, inside the pressurized cabin. During observations GREAT rotates ±20 degrees from the vertical.

GREAT, the German Receiver for Astronomy at Terahertz Frequencies, is a receiver for spectroscopic observations in the far infrared spectral regime at frequencies between 1.25 and 5 terahertz (wavelengths of 60 to 220 microns), which are not accessible from the ground due to absorption by water vapor in the atmosphere. GREAT is a first-generation German SOFIA instrument, developed and maintained by the Max-Planck Institute for Radio Astronomy (MPIfR) and KOSMA at the University of Cologne, in collaboration with the Max Planck Institute for Solar System Research and the DLR Institute of Planetary Research. Rolf Guesten (MPIfR) is the principal investigator for GREAT. The development of the instrument was financed by the participating institutes, the Max Planck Society and the German Research Foundation (Deutsche Forschungsgemeinschaft; DFG).

APEX, the Atacama Pathfinder Experiment, is a collaboration between the Max Planck Institute for Radio Astronomy (MPIfR), Onsala Space Observatory (OSO), and the European Southern Observatory (ESO) to construct and operate a modified prototype antenna of ALMA (Atacama Large Millimetre Array) as a single dish on the Chajnantor plateau at an altitude of 5,100 meters above sea level (Atacama Desert, Chile). The telescope was manufactured by VERTEX Antennentechnik in Duisburg, Germany. The operation of the telescope is entrusted to ESO.