A millisecond pulsar in a stellar triple system

Millisecond pulsars are old neutron stars, with rotational frequencies of several hundred revolutions per second. Previous theoretical studies have explained their origin via mass transfer in binary systems. However, the first discovery of a millisecond pulsar in a triple system is quite a surprise and challenges current consensus. The astrophysicist Thomas Tauris from the Max Planck Institute for Radio Astronomy and the Argelander Institute for Astronomy in Bonn, has developed a semi-analytical model, jointly with Ed van den Heuvel from the University of Amsterdam, which can resolve the puzzling formation of this exotic triple system. Through theoretical calculations and stability analysis on the base of stellar evolution, they have demonstrated a plausible theoretical model which brings new insight to our knowledge of stellar interactions in multiple star systems. Their study can also help explain an increasing number of observed binary millisecond pulsars which seem to require a triple system origin.

The results are published online in The Astrophysical Journal Letters on January 06, 2014. 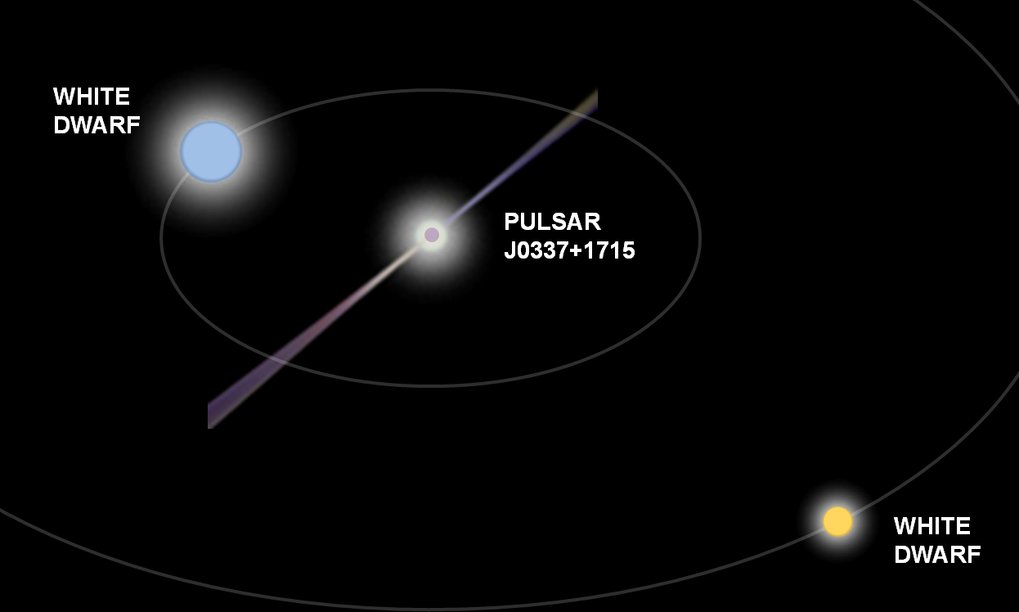 Pulsars are among the most extreme celestial bodies known. They have radii of only 10 kilometres, but at the same time a mass exceeding that of our Sun. Pulsars are formed as the remnants of violent supernova explosions of massive stars. The fastest rotating neutron stars are known as millisecond pulsars. They are thought to be strongly magnetized, old neutron stars which have been spun up to high rotational frequencies by accumulation of mass and angular momentum from a companion star in a binary system. Today we know of about 200 such pulsars with spin periods between 1.4 and 10 milliseconds. These are located in both the Galactic Disk and in Globular Clusters.

Since the first binary pulsar was detected in 1974, theoretical astrophysicists have investigated mass transfer between stars and other binary interactions in order to explain their origin. A surprising new discovery has now revealed a millisecond pulsar in a triple system with two white dwarf companions, posing a unique challenge to stellar physicists to explain its formation.

"This is a truly amazing system with three degenerate objects. It has survived three phases of mass transfer and a supernova explosion, and yet it remained dynamically stable", says Thomas Tauris, theoretical astrophysicist and first author of the present study. "Pulsars have previously been found with planets and in recent years my observational colleagues have discovered a number of peculiar binary pulsars which seem to require a triple system origin. But this new millisecond pulsar is the first to be detected with two white dwarfs".

The new triple millisecond pulsar J0337+1715 was discovered recently by a joint American-European collaboration led by Scott Ransom from National Radio Astronomy Observatory (USA). The system is located in the constellation of Taurus at a distance of about 4000 light-years. It is in the Galactic disk, and not inside a globular cluster. Therefore, its existence cannot be explained simply as a result of dynamical encounter events in a dense stellar environment. During the last 6 months, Thomas Tauris and Ed van den Heuvel have developed a semi-analytical model to explain its existence. One of the key results obtained from their investigation is that the observed parameters reflect that both white dwarfs were indeed produced in the present system.

Triple systems often become dynamically unstable during their evolution leading to expulsion of one of the three stars. A major challenge was to find a solution that remained dynamically stable throughout the entire evolution, including the stage of the supernova explosion. "An interesting result of our new investigation is that the system evolved through a common envelope stage where both white dwarf progenitor stars were dragged into the envelope of the massive star due to frictional forces, causing their orbits to shrink by a large factor, thereby enabling survival of its subsequent explosion", says Ed van den Heuvel.

"Actually, we can apply several tests of stellar evolution with this new system and also make predictions about its 3-dimensional velocity which can be measured within a few years", concludes Thomas Tauris. "This will allow us to constrain the mass of the exploding star."

This work has profited from a recent effort to bridge the Fundamental Physics in Radio Astronomy group at the Max-Planck-Institut für Radioastronomie (MPIfR), led by Michael Kramer, with the Stellar Physics group at the Argelander-Institut für Astronomie (AIfA) at University of Bonn, led by Norbert Langer. Michael Kramer and his colleagues are using the 100-m Effelsberg Radio Telescope to participate in several ongoing searches and discoveries of millisecond pulsars, while the stellar physicists at AIfA are modelling their formation and evolution.

Thomas Tauris has been working at the AIfA and MPIfR as a visiting research professor since 2010. Some of his recent work on the recycling of millisecond pulsars has been published jointly with Norbert Langer, Michael Kramer and other colleagues in Bonn. Together they host twice per year an international one-day workshop in Bonn, called Formation and Evolution of Neutron stars.