For the first time SOFIA, the "Stratospheric Observatory for Infrared Astronomy", has been deployed to the southern hemisphere. Based at the airport of Christchurch, New Zealand for three weeks, SOFIA has started to study celestial objects that are uniquely observable on southern flight routes. On the morning of July 18 New Zealand time, SOFIA landed after the first of its planned 9 science flights that included studies of the Magellanic Clouds, neighbours to the Milky Way galaxy, and of the circumnuclear disk orbiting the black hole in the center of our Galaxy. The GREAT instrument used in these flights has been developed by a consortium of German research institutes led by Rolf Güsten (Max Planck Institute for Radio Astronomy). As a joint project between NASA and the German Aerospace Center (Deutsches Zentrum für Luft- und Raumfahrt, DLR), SOFIA carries a telescope with an effective diameter of 2.5 meters in a modified Boeing 747SP aircraft and is thus the world's largest airborne observatory. SOFIA flies at altitudes as high as 13,700 meters (45,000 feet) to provide access to astronomical signals at far-infrared wavelengths that would otherwise be blocked due to absorption by water vapor in the atmosphere.

A crew of about 60 scientists, technicians, and engineers from the U.S. and Germany plus two shifts of NASA pilots will operate SOFIA while based in New Zealand.

The GREAT (German Receiver for Astronomy at Terahertz Frequencies) far-infrared spectrometer, developed jointly by the MPI für Radioastronomie, Bonn, and the Universität zu Köln, will be mounted on the telescope during the entire deployment.

"The more than 30 publications of scientific results from the first observing campaigns with SOFIA's first generation of instruments, GREAT and (U.S.) FORCAST, in 2011 in the northern hemisphere have already demonstrated the tremendous scientific potential of this observatory," said Alois Himmes, DLR's SOFIA program manager. "The current (and future) deployments to New Zealand will expand this potential substantially," he added. 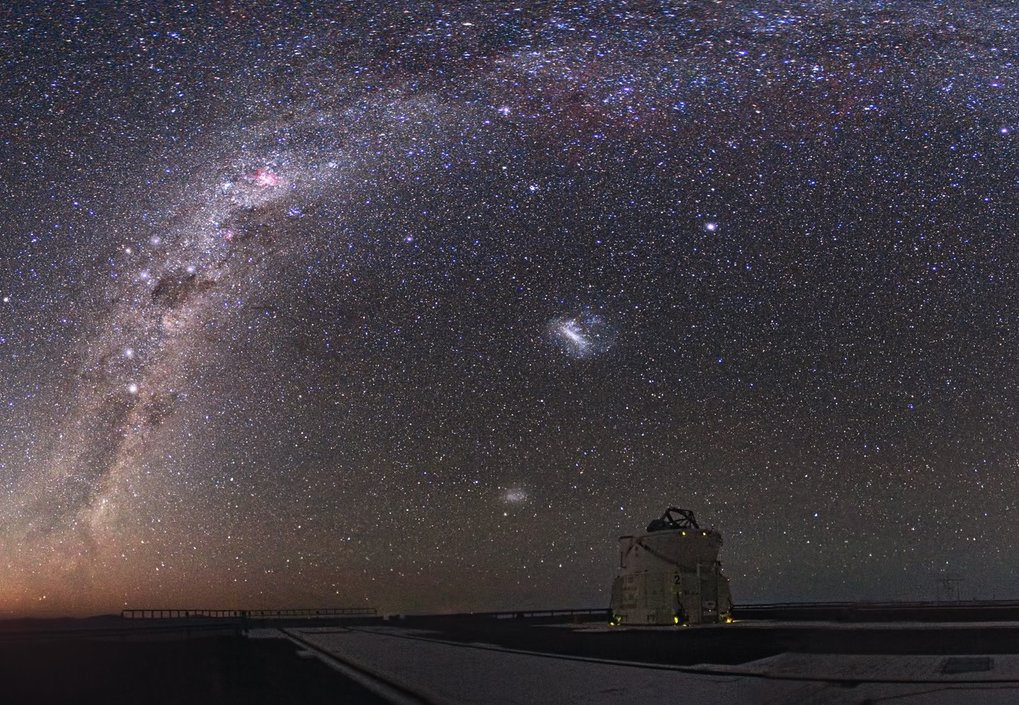 On July 12 the airplane flew from its usual home at Palmdale, Califfornia (U.S.A.), via Hawaii, to New Zealand where it will be based until August 02. The scientific targets for the southern deployment of SOFIA include the Large and Small Magellanic Clouds, as well as objects in the central regions of the Milky Way. The two Magellanic Clouds, dwarf galaxies in the close neighbourhood of our Galaxy, are easily visible with the naked eye in the southern sky (Figure 2, they are named after explorer Ferdinand Magellan, one of the first Europeans to report seeing them). Their relative proximity allows detailed investigation of the stellar life cycles, from protostars to supernova remnants. Sites of prominent star formation will be studied during the deployment - sites well known from optical studies but barely explored at far-infrared wavelengths. For a number of science objectives the telescope will be pointing at the Milky Way's center, which is much better and longer accessible from the southern hemisphere than from the north.

The Deutsches SOFIA Institut (DSI) of the University of Stuttgart manages the German contributions to SOFIA's mission operations and scientific observations. A crew of 13 DSI colleagues will support the observatory's first southern deployment with their expertise regarding the Infrared Telescope. "We plan to conduct up to three scientific flights per week," explains Holger Jakob, head of the German telescope team. "Thus we will be quite busy during the deployment."

The high spectral resolving power of the GREAT instrument is designed for studies of the interstellar gas and the stellar life cycle, from a protostar's early embryonic phase when still embedded in its parental cloud, to deaths of evolved stars when their outer envelopes are ejected back to space, providing gas enriched with heavy elements that is "recycled" into later generations of stars and planets. "With the GREAT instrument on SOFIA the newest technology can be used for astronomical applications. This provides a continuing basis for astrophysical investigations in this particularly important wavelength range of far-infrared astronomy, following up on the successful ESA-mission Herschel" says Prof. Jürgen Stutzki, Universität zu Köln.

"The GREAT success to address new exiting science at far-infrared wavelengths has been demonstrated during SOFIA's earlier, northern hemisphere science flights. Now we are turning the instrument to new frontiers such as the Magellanic Clouds, which are relatively deficient in heavy elements, including the Tarantula nebula (also known as 30 Doradus), the most active starburst known in the Local Group of Galaxies", adds Rolf Güsten from the Max-Planck-Institut für Radioastronomie in Bonn, leader of the group of German researchers who developed GREAT. SOFIA's deployment to the southern hemisphere shows the remarkable versatility of this observatory, the product of years of fruitful collaboration and cooperation between the U.S. and German space agencies", says Paul Hertz, director of NASA's Astrophysics Division. "This is just the first of a series of SOFIA scientific deployments envisioned over the course of the mission's planned 20-year lifetime," he concludes.

"We had a very successful flight tonight, excellent data on all targets", said GREAT project leader Rolf Güsten immediately after the first science flight finished at Christchurch International Airport. "I have never seen a far-infrared sky as transparent as tonight - a few micron water only. That's almost space!"

GREAT, the German Receiver for Astronomy at Terahertz Frequencies is a receiver for spectroscopic observations in the far infrared spectral regime at frequencies between 1.25 and 5 terahertz (wavelengths of 60 to 220 microns), which are not accessible from the ground due to absorption by water vapor in the atmosphere. GREAT is a first-generation German SOFIA instrument, developed and maintained by the Max-Planck Institute for Radio Astronomy (MPIfR) and KOSMA at the University of Cologne, in collaboration with the Max Planck Institute for Solar System Research and the DLR Institute of Planetary Research. Rolf Guesten (MPIfR) is the principal investigator for GREAT. The development of the instrument was financed by the participating institutes, the Max Planck Society and the German Research Foundation (Deutsche Forschungsgemeinschaft; DFG).