A massive pulsar in a compact relativistic binary

A heavyweight for Einstein

Probing gravity where no one has done it before

An international research team led by astronomers from the Max Planck Institute for Radio Astronomy (Bonn, Germany) used a collection of large radio and optical telescopes to investigate PSR J0348+0432, a newly discovered pulsar, and its white dwarf companion. The observations revealed a system with unusual properties: weighing twice as much as the Sun, making it the most massive neutron star measured to date. This, in combination with its short orbital period of only 2.5 hours, provides insight into binary stellar evolution and makes this system a strong emitter of gravitational radiation. The energy loss through this radiation has already been detected in the radio observations of the pulsar, making it a laboratory for General Relativity in extreme conditions not accessible before. The findings are in excellent agreement with Einstein's theory. The results are published in an extended report in the current issue of "Science" (Science Online, April 26, 2013). 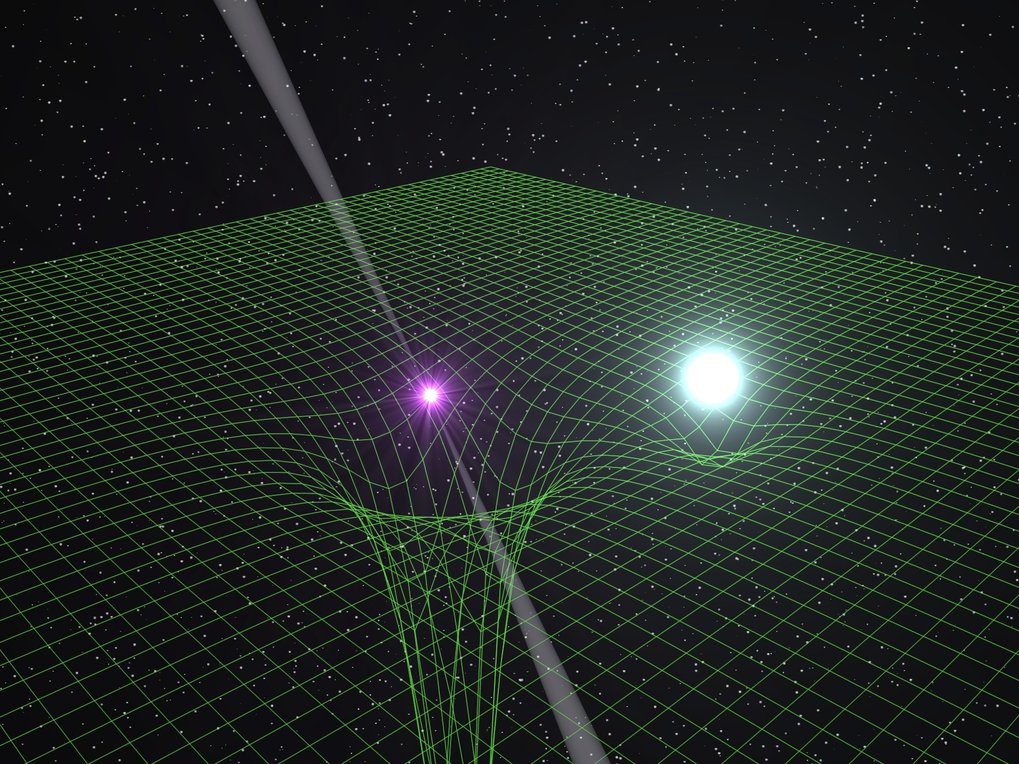 Imagine half a million Earths packed into a sphere 20 kilometers in diameter, spinning faster than an industrial kitchen blender. These extreme conditions, almost unimaginable by human standards, are met in a neutron star - a type of stellar remnant formed in the aftermath of a supernova explosion.

Neutron stars often catch the attention of astronomers because they offer the opportunity to test physics under unique conditions. They were first discovered almost half a century ago as pulsars which emit radio pulses like a lighthouse. Pulsar research has been honored with two Nobel prizes, one for their discovery (1974) and one for the first indirect detection of gravitational waves (1993) - a consequence of Einstein's theory of General Relativity.

PSR J0348+0432 is a pulsar in orbit with a white-dwarf, recently discovered using the Green-Bank radio telescope in an ongoing global effort to find more of these exciting pulsars. With a separation of just 830,000 km, the pulsar and the white dwarf in this system are close enough to emit a significant amount of gravitational waves. This should make the orbital size and period shrink, as predicted by General Relativity. To verify this prediction, one needs to know both the mass of the pulsar and its companion.

"I was observing the system with ESO's Very Large Telescope in Chile, trying to detect changes in the light emitted from the white dwarf caused by its two million km/h motion around the pulsar." says John Antoniadis, IMPRS student at the Max Planck Institute for Radio Astronomy (MPIfR) in Bonn and leading author of the paper. "This allows us to weigh both, the white dwarf and the pulsar. After a quick on-the-spot analysis I realized that the pulsar was quite a heavyweight: a mass twice that of the Sun, making it the most massive neutron star we know of."

With these masses at hand, one can calculate the amount of energy taken away from the system by gravitational waves, causing the orbital period to shrink. The team immediately realized that this change in the orbital period should be visible in the radio signals of the pulsar and turned its full attention to PSR J0348+0432, using the three largest single-dish radio telescopes on Earth (Fig. 2). "Our radio observations with the Effelsberg and Arecibo telescopes were so precise that by the end of 2012 we could already measure a change in the orbital period of 8 microseconds per year, exactly what Einstein's theory predicts", states Paulo Freire, scientist at MPIfR. "Such measurements are so important that the European Research Council has recently funded BEACON, a new state-of-the-art system for the Effelsberg radio telescope." 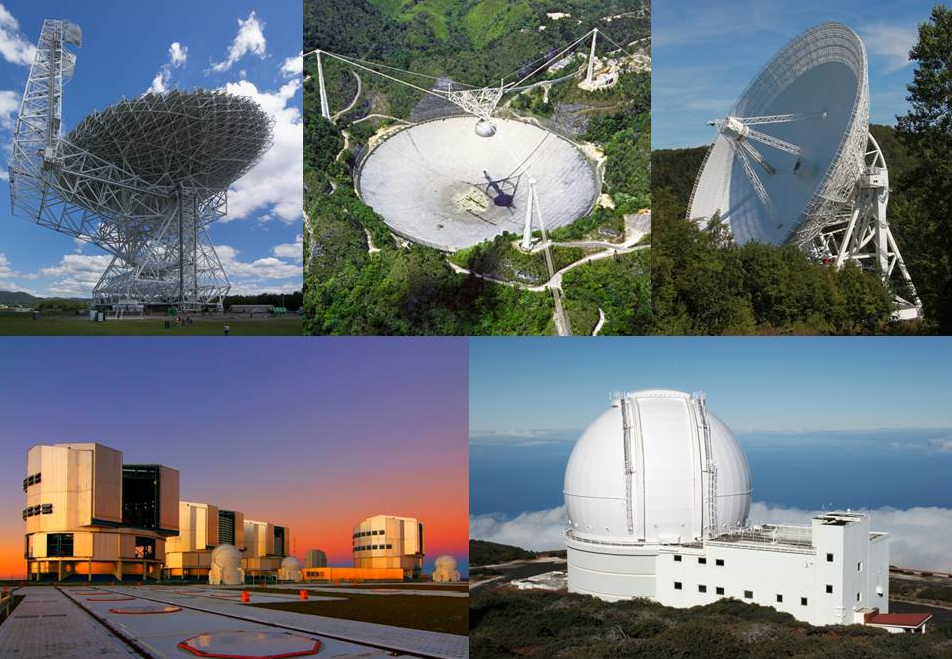 In terms of gravity, PSR J0348+0432 is a truly extreme object, even compared to other pulsars which have been used in high precision tests of Einstein's general relativity. At its surface, for example, it has a gravitational strength that is more than 300 billion times stronger than that on Earth. In the center of that pulsar, more than one billion tons of matter is squeezed into a volume of a sugar cube. These numbers nearly double the ones found in other 'pulsar gravity labs'. In the language of general relativity, astronomers were able for the first time to precisely investigate the motion of an object with such a strong space-time curvature (see Fig. 1).

"The most exciting result for us was, that general relativity still holds true for such an extreme object", says Norbert Wex, a theoretical astrophysicist in MPIfR's fundamental physics research group. In fact, there are alternative theories that make different predictions, and therefore are now ruled out. In this sense, PSR J0348+0432 is taking our understanding of gravity even beyond the famous 'Double Pulsar', J0737-3039A/B, which was voted as one of the top ten scientific breakthroughs of 2004 by the 'Science' journal.

"Such extreme physical conditions are impossible to replicate in laboratories on Earth," says Thomas Tauris, a member of the Stellar Physics group at the Argelander-Institut für Astronomie of Bonn University. "We would certainly like to learn how nature built such systems for us. For the J0348+0432 system, however, our formation theories are stretched to the limit. The system has a peculiar combination of properties: the tight orbital period and the pulsar's high mass, relatively slow rotation and strong magnetic field. It therefore poses an interesting challenge to the understanding of binary evolution."

Last but not least, these findings are also important for scientists who search for gravitational waves. On Earth, they are using large detectors, like the laser interferometers GEO600, LIGO and VIRGO. One of the key signals they are looking for in their data are the gravitational waves emitted by two neutron stars during those last few minutes when they quickly spiral towards each other and finally collide. Decades of mathematical research in general relativity were necessary to calculate the expected gravitational waves from such a collision. Those equations are needed to identify them in the detectors' recordings. The first such identification is expected within the next five years. "Our results on J0348+0432 provide added confidence in these equations for the whole range of neutron star masses observed in nature", says Michael Kramer, director at MPIfR and head of its fundamental physics research group. "Given the great effort involved in deriving these equations, Einstein's theory passing this test is good news for our colleagues in gravitational wave astronomy."

BEACON: The Effelsberg observations were part of "BEACON", a 1.9-million-Euro project funded by the European Research Council aimed to push tests of gravity theories into new territories. Paulo Freire/MPIfR is the principal investigator of BEACON. The project has funded a state-of-the-art instrument to be installed at Effelsberg in the coming months that will target the pulsar with the aim to substantially improve the accuracy of the published results.