The Atacama Pathfinder Experiment (APEX) project celebrates the inauguration of its new technology 12-m telescope, located on the 5100 m high Chajnantor plateau in the Atacama Desert (Chile). The APEX telescope, designed to work at sub-millimeter wavelengths, in the 0.2 to 1.5 mm range, passed successfully its Science Verification phase in July, and since then is performing regular science observations. This new front-line facility provides access to the "Cold Universe" with unprecedented sensitivity and image quality.

After months of careful efforts to set up the telescope to work at the best possible technical level, most of those involved in the project are looking with satisfaction at the fruit of their labor:. APEX is, at the date of its inauguration, not only fully operational, it has already provided important scientific results.

Karl Menten, Director of MPIfR's group for Millimeter and Sub-millimeter Astronomy and Principal Investigator of the APEX project, is excited: "The superb sensitivity of our detectors together with the excellence of the site allow fantastic observations that would not be possible with any other telescope in the world. We've not only observed sources in our own Milky Way, but also in galaxies far away. Traditionally, telescopes turn to weak extragalactic sources only after they are long in operation. With APEX, we could pick them amongst our first targets!"

The official inauguration of the APEX telescope takes place in San Pedro de Atacama on September, 25th and 26th. Starting at 3pm local time on Sunday, welcome addresses of representatives of the Scientific Organizations running the telescope (Max-Planck-Society, Swedish Research Council and European Southern Observatory) and of the host country, Chile, are followed by a presentation of the project by the Project Manager Dr. Rolf Güsten. Scientific lectures of all three directors (Profs. Karl Menten and Roy Booth, Dr. Catherine Cesarsky) describe sub-millimeter astronomy with APEX. Guided tours to the APEX base camp in Sequitor and to the APEX site (Llano de Chajnantor, 5100 m above sea level) take place on Monday. The Opening ceremony and a guided tour to telescope and facilities on-site commence the inauguration. 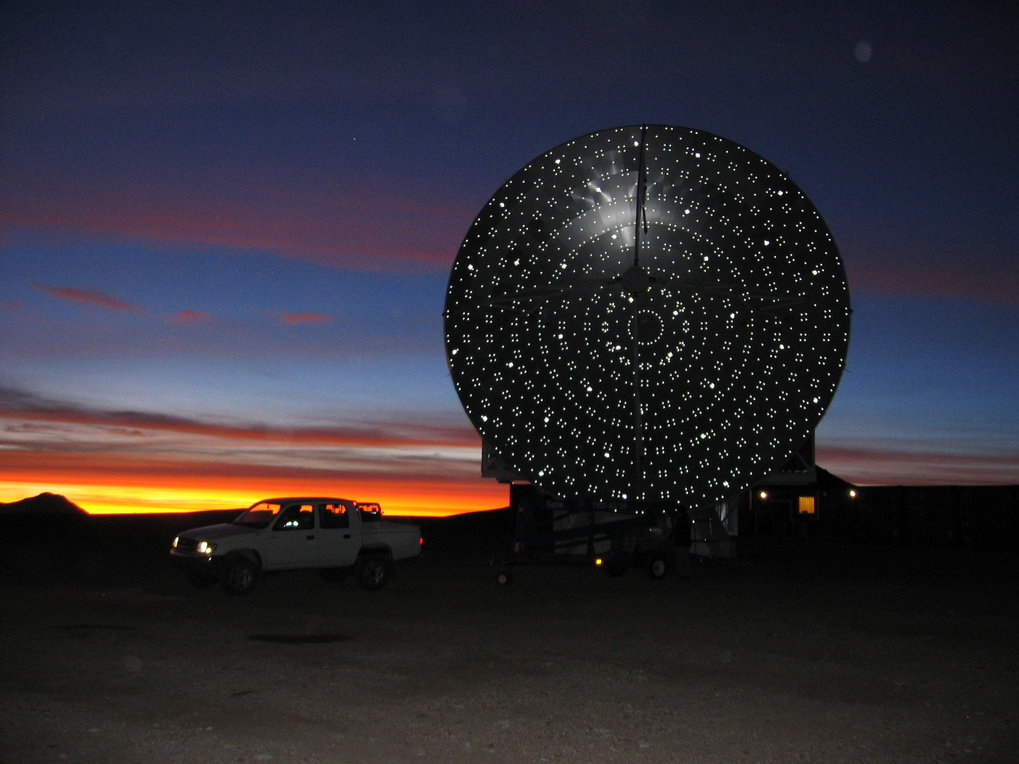 Because sub-millimeter radiation from space is heavily absorbed by water vapour in the Earth's atmosphere, APEX is located at an altitude of 5100 meters in the high Chilean Atacama desert on the Chajnantor plains, 50 km east of San Pedro de Atacama in northern Chile. The Atacama desert is one of the driest places on Earth, thus providing unsurpassed observing opportunities - at the costs of the demanding logistics required to operate a frontier science observatory at this remote place. APEX is the first and largest sub-millimeter facility under southern skies. With its precise antenna and large collecting area, it provides unprecedented access to a whole new domain in astronomical observations.

Millimeter and sub-millimeter astronomy opens exciting new possibility in the study of the first galaxies to have formed in the Universe and of the formation processes of stars and planets. APEX allows astronomers to study the chemistry and physical conditions of molecular clouds, that is, dense regions of gas and dust in which new stars are forming. An example of that is the image of the molecular cloud G327, where significant emission in carbon monoxide and complex organic molecules has been measured by APEX (Fig. 2). 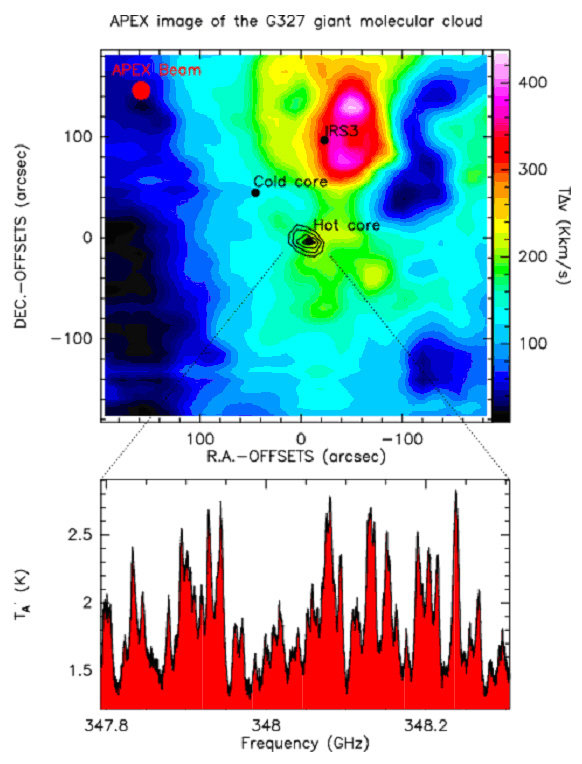 As its name implies, APEX is the pathfinder for new submillimeter and Far Infrared science, prominent among them the SOFIA airplane observatory, the Herschel satellite and the ALMA project. It is indeed a modified ALMA prototype antenna and is located at the same future site of the ALMA observatory. ALMA is planned to consist of a giant array of 12-m antennas separated by baselines up to 14 km and is expected to start operation by the end of the decade.

In order to operate at the shorter submillimeter wavelengths, APEX presents a surface of exceedingly high quality. Over the 12m diameter of the antenna, the deviation from a perfect parabola is now less than 17 thousandths of a millimeter. This is smaller than one fifth of the average thickness of a human hair!

In parallel to the construction and commissioning of the APEX telescope, a demanding cutting-edge technology program has been launched to provide the best possible detectors for this outstanding facility. For its first observations, APEX was equipped with state-of-the-art sub-millimeter receivers and new technology wide-band and high resolution Fast Fourier Transform Spectrometers developed by MPIfR's Division for Submm Technology and, more recently, with the first facility receiver, build at Chalmers University (OSO).

"From the engineering point of view, APEX is a big success already and its performance surpasses our expectations", says APEX Project Manager Rolf Güsten. "This could only be achieved thanks to the very committed teams from the constructor, from the MPIfR and from the APEX project whose endless work hours, often at high altitudes, made this project become reality."

APEX is a collaboration between the Max-Planck-Institut für Radioastronomie (MPIfR), Onsala Space Observatory (OSO), and the European Southern Observatory (ESO). The telescope was designed and constructed by VERTEX Antennentechnik GmbH (Germany), under contract by MPIfR, and is based on a prototype antenna constructed for the ALMA project. Operation of APEX in Chajnantor is entrusted to ESO.