A gigantic Gamma Ray Burst in the Milky Way has left traces, which are still recognizable on Earth after a million years. The excess of very high energy cosmic rays, which reaches Earth from the direction of the Galactic central region, could be caused by such an event. For more than ten years detctors in Japan and Australia have seen this radiation, but sofar it wa snot clear, which processes are resonsible.
An international team of researchers with Prof. Peter L. Biermann of the Max Planck Institute for Radioastronomy and the University of Bonn, has now numerically simulated, how the energy of such a powerful stellar explosion is propagated from the inner region of the Galaxy, and becomes detectable at Earth. The carriers of this energy are initially protons. On the path through the Galaxy they transform themselves several times, and finally arrive here as neutrons. 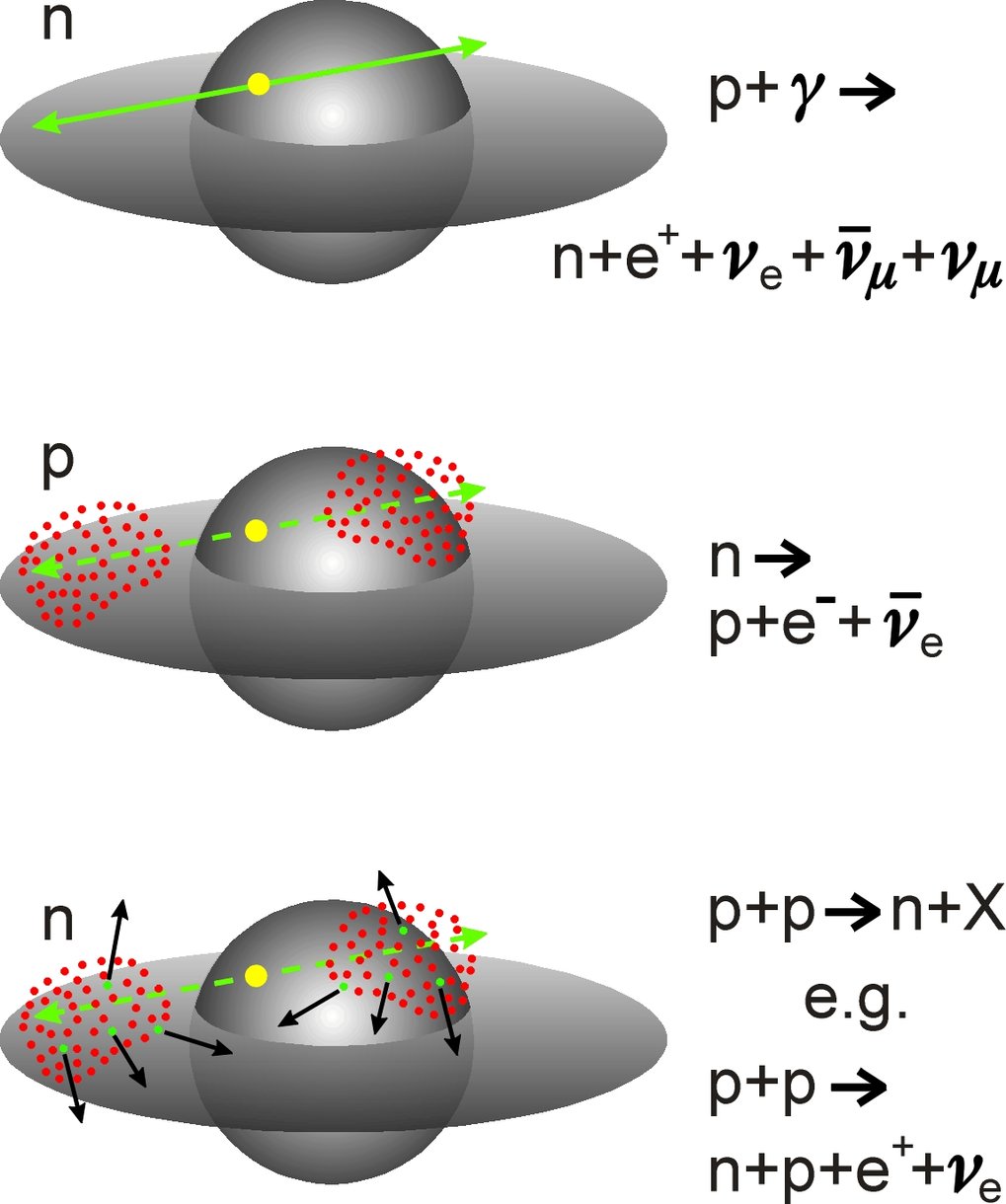 Gamma Ray Bursts have been detected originally in the 1960ies, but only in 1997 there was a first Gammay Ray Bursts identified with an optical counterpart. The main problem in such an identification is the fact that these bursts are very brief, and so an astronomer has to be very fast to point an optical telescope into the proper direction. Gamma Ray Buursts are extremely rare events. In our Milky Way they happen roughly every million years. Only early 2003 was it possible to unequivocaly demonstrate with a specific Gamma Ray Burst that there is a connection beween Gamma Ray Bursts and Supernova explosions. Practically all models for Gamma Ray Bursts propose that the energy of an exploding very massive star is ejected through two opposite jets and very energetic beams of particles (see e.g. Jochen Greiner et al., Press Release Max-Planck-Gesellschaft November 13th, 2003 (in German)).

In a collaboration with his colleagues Gustavo M. Tanco of the University of Sao Paolo (Brazil), Ralph Engel of the Research Center Karlsruhe (Germany), and Giovanna Pugliese of the European Southern Observatory in Garching (Germany) Peter Biermann followed the path of the particle beams from such explosions in the Milky Way. In a paper just published in Astrophysical Journal Letters 604, L29-L32 they have shown, which consequences are observable at earth after such a Gamma Ray Burst happens in the inner region of our Galaxy.

In the jets protons get accelerated, but the magnetic field keeps them in inner parts of the jets. Proton-photon collisions change the proton's nature to neutrons. Neutrons, however, are not influenced by the magnetic field and can escape. On the other hand, neutrons are not stable as single particles and decay after 15 minutes back into protons, which can be held captive by the magnetic field of the Galaxy, With sme small probablility such a proton can encounter another proton of the interstellar gas, and with other elementary particles again a neutron can be produced. When such a second generation neutrons hits the Earth atmosphere, there is a violent chain reaction, which can be easily observed. The numerical simulations have shown, that even after a million years, the flux of neutrons is still recognizable around an energy of 1018 eV.

The research teams of Japan and Australia have indeed detected such a neutron beam from the direction of the inner part of the Galaxy, but sofar could not explain its origin.

This is possible with the model now introduced. On the other hand more dramatic consequences are conceivable. "Of course, it is very unlikely, that the GRB jet would point exactly at Earth - that might be damaging to us, since this is the same power in a few seconds as the Sun gives in minutes, and in a less benign form", says Peter Biermann.

The Pierre Auger experiment will permit a solid test of this model. The Pierre Auger Observatory, located in Argentina, is ideally suited to detect just such radiation from the Galactic center. The combination of several detecor techniques allows to demonstrate the existence of particles from a few 1017 eV all the way to the highest known energies.