On April 1, 2021, a special stamp will be issued to mark the 50th birthday of the telescope

The 100-meter radio telescope of the Max Planck Institute for Radio Astronomy in Bonn will celebrate its 50th birthday in 2021. A special postage stamp "50 Jahre 100m-Radioteleskop Effelsberg" (“50 Years of the Effelsberg Radio Telescope”) will be issued on April 1, 2021. The construction of the telescope in an Eifel valley about 40 km southwest of Bonn took place over an about three and a half year long period between 1967 and 1971. On May 12, 1971, an opening ceremony took place at the site of the telescope, not too far from the two Eifel villages of Effelsberg and Lethert, which are now parts of the nearby town of Bad Münstereifel.

About one year later, on August 1, 1972, the Effelsberg radio telescope became fully operational. Over the past five decades, a multitude of successful observations of the universe in radio waves have been made with the telescope, from our cosmic neighborhood in the Milky Way to very distant galaxies. Since then, a steady flow of technical upgrades of the telescope and its detector equipment are being made ensure that it is still one of the most powerful radio telescopes on Earth. The 100-m telescope plays a central role in the scientific work of the institute. 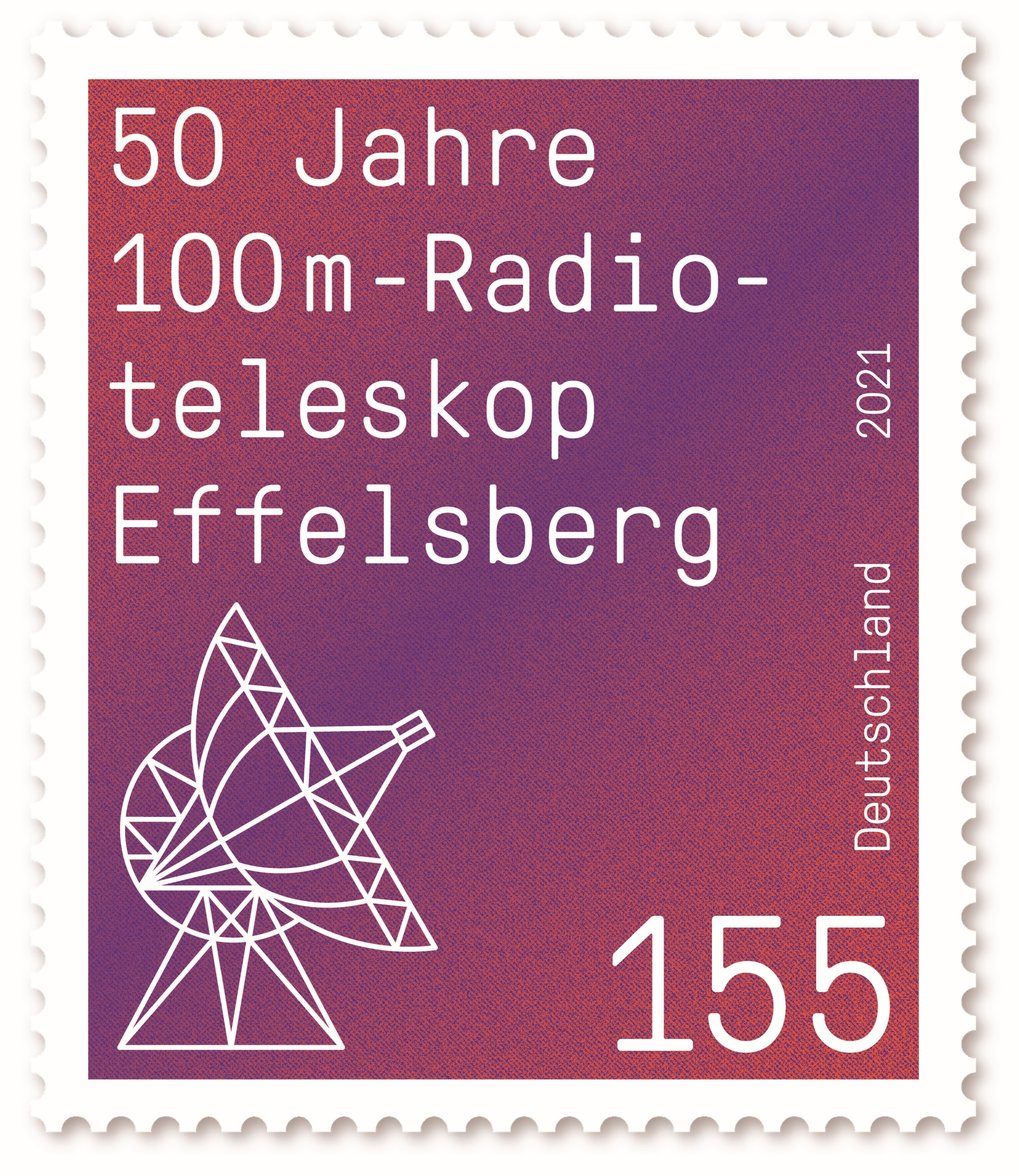 The special issue stamp "50 Years of the Effelsberg 100m Radio Telescope" with a face value of 1.55 euros will be issued ... [more]

Since its beginnings in the 1930s, radio astronomy has become an important tool for exploring the universe, because radio waves penetrate through depths of the universe that remain blocked to visible light. For example, the discovery of new celestial bodies such as quasars and pulsars, as well as distant galaxies, can be attributed to this branch of astronomy. At least four Nobel Prizes in physics have been awarded for radio astronomical results. A number of dedicated telescopes are used to observe the sky in radio waves. In Germany, the 100-m radio telescope of the Max Planck Institute for Radio Astronomy (MPIfR) is one of the largest of its kind. Even 50 years after its completion, it remains the largest fully steerable radio telescope in Europe and the second largest on Earth.

To mark the telescope's 50th anniversary, the German Federal Ministry of Finance will issue a special stamp priced 1.55 euros on April 1, 2021 (Fig. 1). It is already the second stamp in Germany showing the 100-m radio telescope. In 1976, the Effelsberg radio telescope was featured as part of the German stamp series "Industry and Technology". With a face value of 500 Pfennig (five DMark), this stamp represented the highest value among the 23 stamps in the series.

The telescope was inaugurated on May 12, 1971, after three and a half years of construction. With regular intensive maintenance, it has been continuously kept up to date with the latest technology and is still one of the most powerful telescopes on Earth. An example for technical innovation with the telescope is the installation of a new subreflector with an active surface in 2006. In 2007, another telescope for observations of longer-wavelength radio radiation was added at the site of the 100m telescope: the Effelsberg station of the European low-frequency telescope LOFAR

The highly sensitive receivers of the 100-m telescope are capable of detecting exceptionally weak radio signals from great distances in the cosmos. Astronomers from all over the world submit observation requests to conduct research projects with this facility. Spectroscopic observations of signals from molecules allow to determine density, temperature, chemistry, and dynamics of the interstellar gas in regions where new stars are being formed. Large-scale magnetic fields have been discovered in many external galaxies. For extreme objects such as pulsars, the final stages in the evolution of massive stars, the 100-m telescope is unique because of its sensitivity in the short cm wavelength range.

The Effelsberg telescope is an important element in the connection of individual radio telescopes in a global network. With interferometric technology (VLBI - Very Long Baseline Interferometry), the sharpest images of the compact sources in the cosmos can be obtained.

Thus, the 100-m Effelsberg radio telescope is a vital instrument for all three research departments at the MPIfR, "Fundamental Physics in Radio Astronomy", "Millimeter and Submillimeter Astronomy" and "Radio Astronomy/VLBI".

"The 100m telescope enables highly sensitive measurements in conjunction with other telescopes around the world and even in space, helping us to study the properties of galactic nuclei in the universe and to understand these mysterious objects," says Anton Zensus, director at MPIfR and head of its "Radio Astronomy/VLBI" research division.

"Fifty years after its inauguration, the telescope is one of the most powerful radio telescopes in the world and it is in great demand. A proportion of more than 70% of the time is used for astronomical observations, with the scientists coming not only from our institute but from all over the world," adds Alex Kraus, the station manager of the Effelsberg Radio Observatory.

Even away from science, visitors around the globe are fascinated by the technology and engineering of the 100-m radio telescope.  Within sight of the gigantic parabolic dish, popular lectures take place in a visitors’ pavilion. From there, a viewing plateau directly in front of the telescope is accessible to visitors via a zigzag path (Fig. 2).

Three astronomical theme trails, Planet Trail, Milky Way Trail and Galaxy Trail, illustrate the almost unimaginable distances in the universe. To mark the 50th anniversary of the telescope, a fourth trail, named "Time Travel Trail," will be added to the three existing trails in 2021. On 20 stations, it will show important landmarks from the 50-year success story of the Effelsberg radio telescope.

We are looking forward to more discoveries with the 100-m telescope in the future. 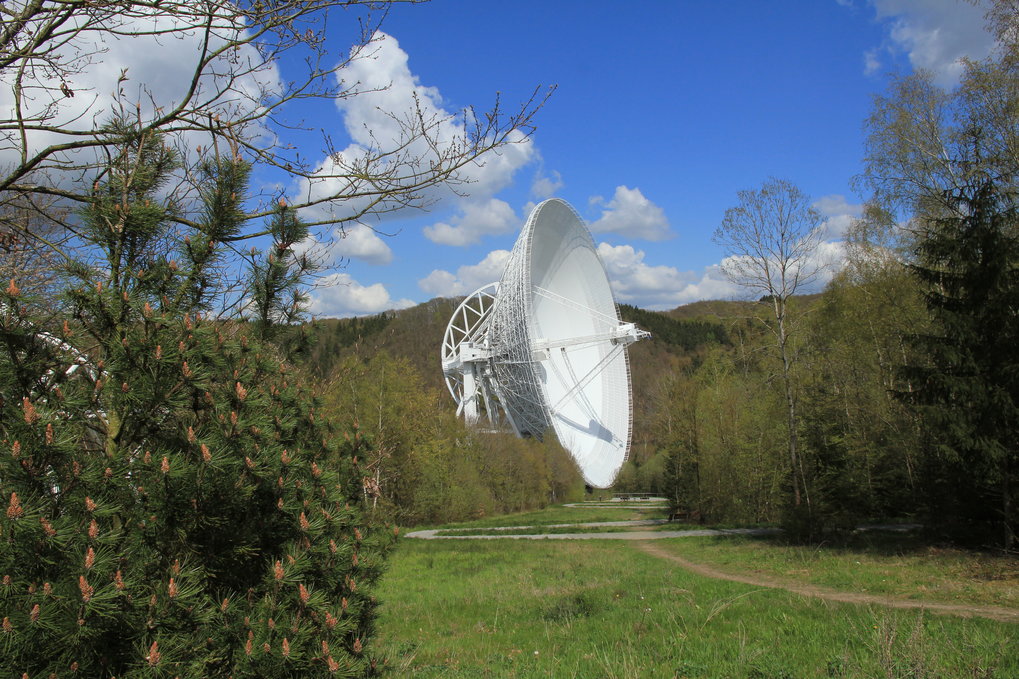 The 100m radio telescope of the MPIfR near Bad Münstereifel, Effelsberg, about 40 km southwest of Bonn. The photo shows ... [more]

The 100m radio telescope of the MPIfR near Bad Münstereifel, Effelsberg, about 40 km southwest of Bonn. The photo shows the access path from the visitor pavilion to the viewing plateau directly in front of the telescope.

The 100m radio telescope of the MPIfR near Bad Münstereifel, Effelsberg, about 40 km southwest of Bonn. The photo shows the access path from the visitor pavilion to the viewing plateau directly in front of the telescope.

With a diameter of 100 meters, the Effelsberg radio telescope is one of the largest fully steerable radio telescopes on Earth. The telescope is used to observe pulsars, cold gas and dust nebulae, the sites of star formation, jets from black holes and the nuclei of distant galaxies, as well as radio emission and magnetic fields in our Milky Way and nearby galaxies. The Effelsberg telescope is an important part of VLBI, the worldwide network of radio telescopes. The combination of different telescopes in interferometric operation makes it possible to obtain the sharpest images of the universe.