Halfway mark for NOEMA, the super-telescope under construction

The completion of NOEMA phase 1, the first phase of the NOEMA project was officially celebrated on Wednesday, September 19th. The Max Planck Society and its partner institute IRAM have completed the first, decisive step towards one of the most important German-French-Spanish initiatives in astronomy: upgrading the NOEMA observatory in the French Alps and developing the most powerful and most sensitive telescope at millimetre wavelengths in the Northern hemisphere. Four years after the inauguration of the first NOEMA antenna, ten 15-meter dishes currently constitute the observatory and have provided ground-breaking scientific results. 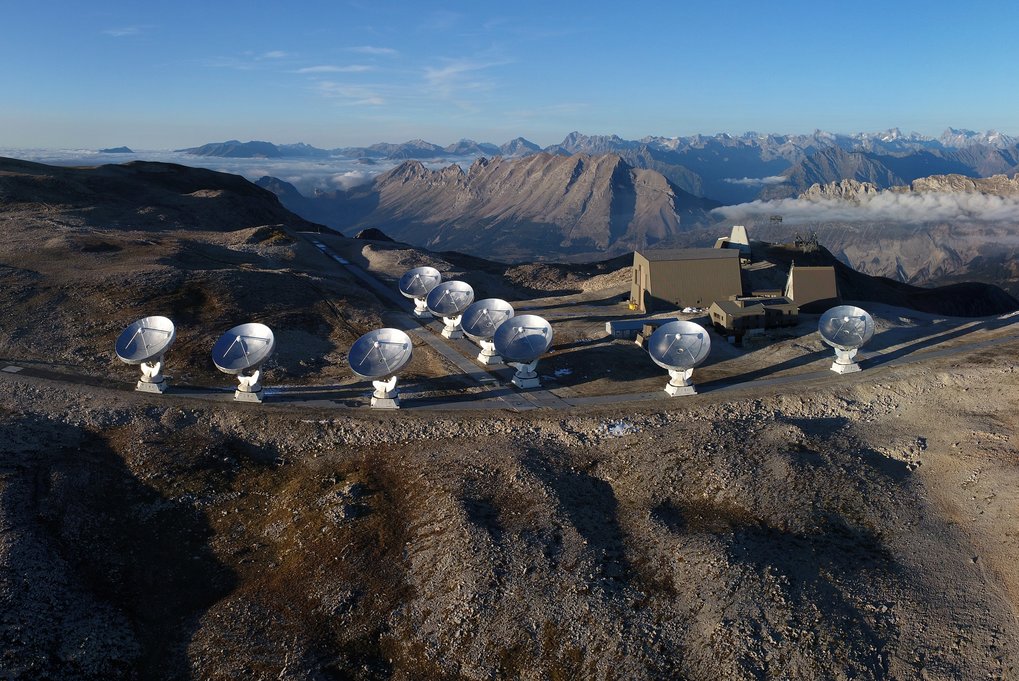 NOEMA (NOrthern Extended Millimeter Array) is part of a completely new generation of radio telescopes: it consists of an array of several movable telescopes placed on tracks, equipped with state-of-the-art reception systems which combine to form the equivalent of a single, giant telescope. With outstanding sensitivity and resolution, NOEMA permits to explore the cold universe at temperatures very near absolute zero at -273.15 degrees Celsius, unveiling objects impossible to observe using optical instruments because they are hidden by interstellar clouds of cosmic dust.

One of the most important missions of the NOEMA project is the exploration of interstellar gas clouds and the birth of stars in our own Galaxy and in galaxies observed at a state just after the Big Bang. Scientists hope to find answers to the most fundamental questions of modern-day astronomy: How did the first generation of stars emerge after the Big Bang? How did the first big structures in the universe evolve towards galaxies like our Milky Way? How does the cosmic cycle of interstellar matter work, whereby dying stars eject matter at the end of their lives and potentially give birth to new stars? How new planets and planetary systems take shape and how newly formed planets get enriched by prebiotic molecules which could be fundamental for the emergence of life?

In the future, a total of 12 antennas will scan the sky in the service of the researchers, currently ten antennas have already been constructed on the Plateau de Bure in the French Alps. During the extension of the observatory, scientific operations are ongoing and have provided the first scientific results:

Along with the discovery of a particularly spectacular, active star-forming region filled with prebiotic molecules, NOEMA has recently produced an image of unrivalled precision showing the distribution of dust clouds in a big spiral galaxy in the Camelopardalis constellation.

In addition, NOEMA will be an important part of a larger, global network of telescopes. As the most powerful radio telescope in the Northern hemisphere, NOEMA will play a key role in the exploration of ultra-massive black holes by the global network Event Horizon Telescope. This project combines several radio telescopes across four continents to a worldwide telescope with the goal to image the black hole in the centre of our galaxy for the very first time, amongst other scientific aims.

The equipment of all ten antennas with completely new and highly sensitive reception systems has been crucial for these achievements and the completion of the first project phase. This cutting edge technology permits scientists to take measurements with outstanding sensitivity and at the same time, to analyse a much larger range of wavelengths.

During observations, the ten antennas interact to build one single telescope, a technique called interferometry. The resolving power of such a network of telescopes equals that of one single telescope with a diameter of the maximum distance between the antennas. For NOEMA, this is equivalent to a telescope of up to 760 meters diameter and a resolving power of less than one arc second. In other words, the NOEMA antennas could detect a smartphone from a distance of more than 500 kilometres.

However, observations with so many antennas at the same time require the development of a supercomputer, with a power of 20,000,000,000,000,000 operations by second. This device, called a correlator, is able to analyse numerous simultaneously incoming signals. IRAM engineers have worked for seven years to complete this innovative correlator. A digital wonder equipped with cutting edge technology, it is able to calculate approximately five million times faster than a conventional computer.

“With NOEMA we are part of a new era in radio astronomy”, comments Roberto Neri, IRAM researcher and scientific head of the project. “Together with the ongoing technological developments, this telescope gives us completely new opportunities to explore the most fascinating questions of modern astronomy.”

Scientists of the Max-Planck-Institute for Radioastronomy are thrilled. NOEMA’s large bandwidths will open the path to unique observations of molecules containing deuterium, allowing the study of cosmic nebulae in the early and cold phases of star formation. NOEMA will also be a trailblazer when it comes to measure the redshift of the first galaxies in our Universe.

The second project phase will last until 2021 and foresees, besides antennas 11 and 12, the extension of the track system which will allow to place the antennas at a distance of 1.7 kilometres, increasing tenfold the sensitivity of measurements compared to what has been possible until now. 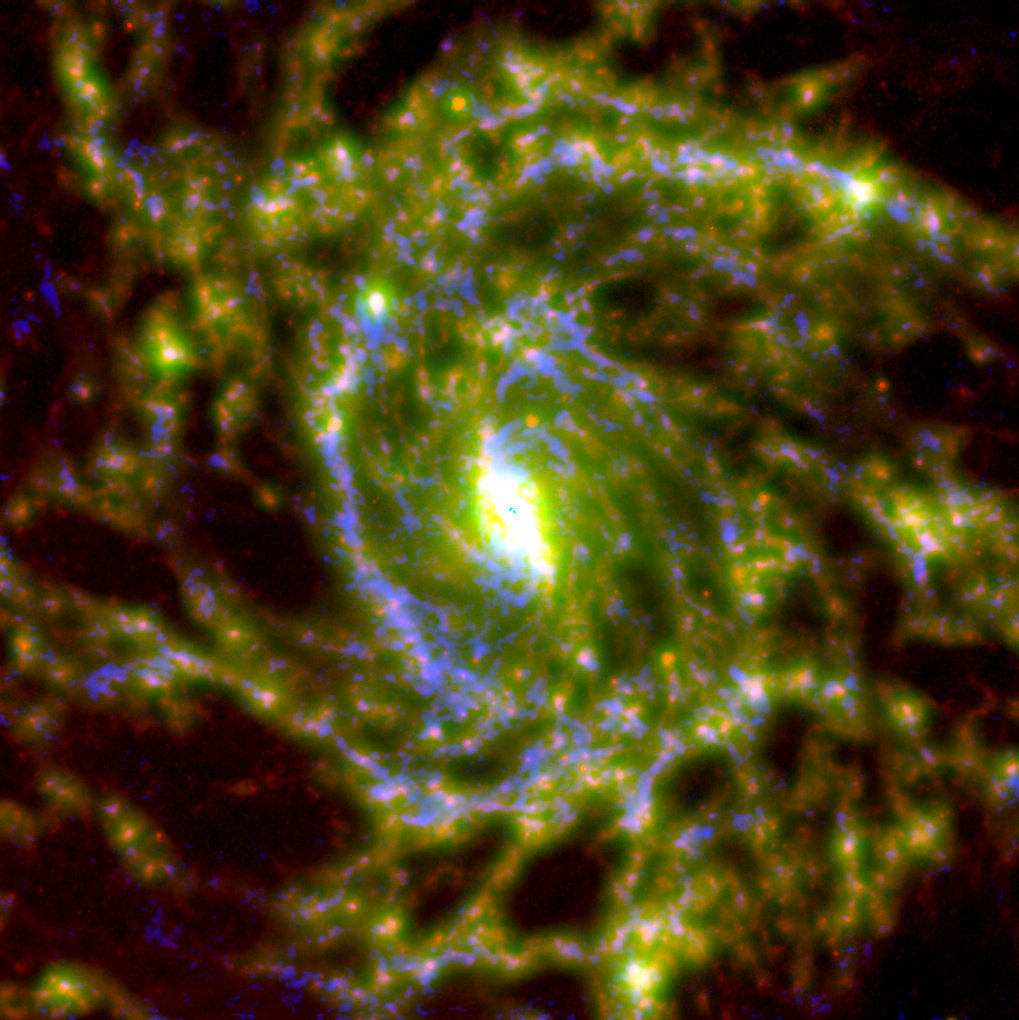 IRAM, the Institute for Radio Astronomy at Millimeter wavelengths was founded in 1979 by the German Max-Planck-Gesellschaft (MPG) and the French Centre National de la Recherche Scientifique (CNRS). The Spanish Instituto Geográfico Nacional (IGN) joined the partnership in 1990. With its headquarters in Grenoble, the institute operates two observatories: The 30-meter telescope on the Pico Veleta near Granada in Spain and the NOEMA observatory (currently ten antennas) on the Plateau de Bure in the French Alps.

The overall budget for the NOEMA project is estimated at 51 million euros. It is supported and financed by the IRAM founding institutions: the Max-Planck-Society and the Centre National de la Recherche Scientifique.

In cooperation with the Max-Planck-Institute for Radioastronomy and the European Research Council Projekt BlackHoleCam, NOEMA is being prepared for its key role in the future Event Horizon Telescope observations.