Highlights — Some exciting recent scientific results from our group 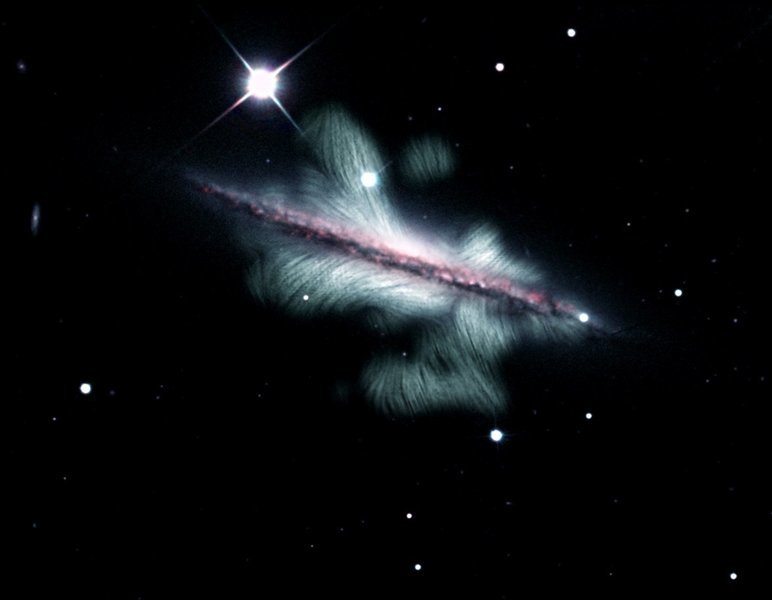 A Spiral Galaxy with a Huge Magnetic Field

Superbubbles, giant loops and X-shaped magnetic field structures – this galaxy boasts a veritable wealth of shapes. How such structures are formed is a mystery. Some clues are provided by a new study led by Yelena Stein within the framework of the CHANG-ES project (“Continuum HAlos in Nearby Galaxies -- an EVLA Survey”). Rainer Beck, a scientist from the Max Planck Institute for Radio Astronomy (MPIfR) in Bonn, Germany, participated in the study. For a comprehensive image of the magnetic field structures, the researchers combined different methods that enabled them to visualise the ordered and chaotic magnetic fields of the galaxy both along the line of sight and perpendicular to it.
[more] 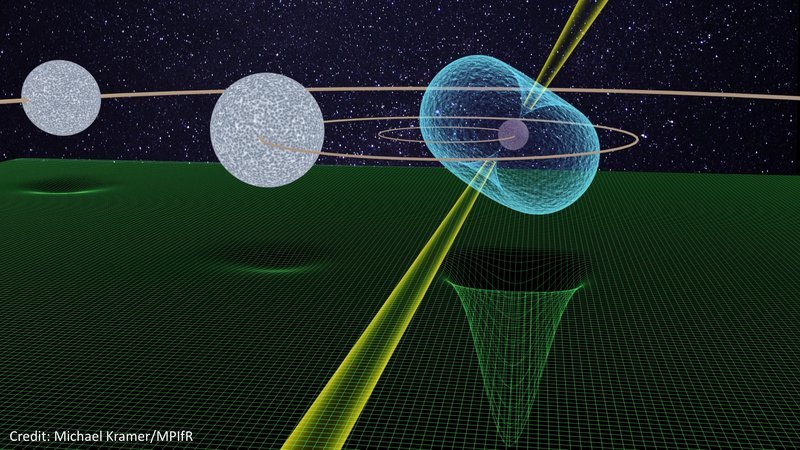 An international research team including astronomers from the Max Planck Institute for Radio Astronomy (MPIfR) in Bonn determined with extremely high precision that gravity causes neutron stars and white dwarf stars to fall with equal accelerations. They did this by precisely tracking the motion of pulsar PSR J0337+1715, a neutron star that is a member of an unusual triple star system. Their findings – achieved by a new rigorous method and a combination of radio telescope data with latest insight from gravitational wave detectors – provide the strongest test ever of one of the most fundamental predictions of general relativity: that gravity attracts all objects with the same acceleration, without regard for their composition, density or the strength of their own gravitational field.
[more] 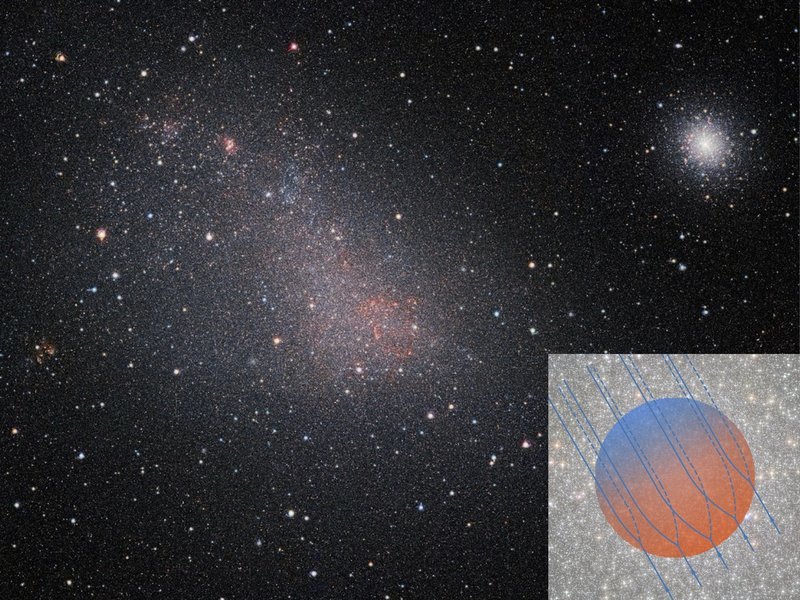 The Galactic magnetic field plays an important role in the evolution of our Galaxy, but its small-scale behaviour is still poorly known. It is also unknown whether it permeates the halo of the Galaxy or not. By using observations of pulsars in the halo globular cluster 47 Tuc, an international research team led by Federico Abbate from the Max Planck Institute for Radio Astronomy in Bonn, Germany who started this work at University of Milano Bicocca and INAF-Astronomical Observatory of Cagliari, could probe the Galactic magnetic field at scales of a few light years for the first time. They discovered an unexpected strong magnetic field in the direction of the cluster. This magnetic field points perpendicularly to the Galactic disk and could be explained by an interaction with the Galactic wind. This is a magnetized outflow that extends from the Galactic disk into the surrounding halo and its existence has never been proven before.
[more] 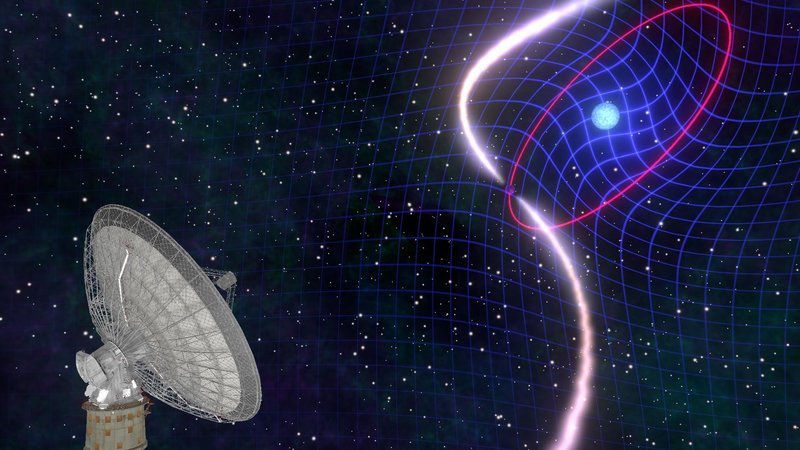 According to Einstein's general relativity, the rotation of a massive object produces a dragging of space-time in its vicinity. This effect has been measured, in the case of the Earth’s rotation, with satellite experiments. With the help of a radio pulsar, an international team of scientists (with important contributions from scientists at the Max Planck Institute for Radio Astronomy in Bonn, Germany) were able to detect the swirling of the space-time around its fast-rotating white dwarf-companion star, and thus confirm the theory behind the formation of this unique binary star system.
[more] 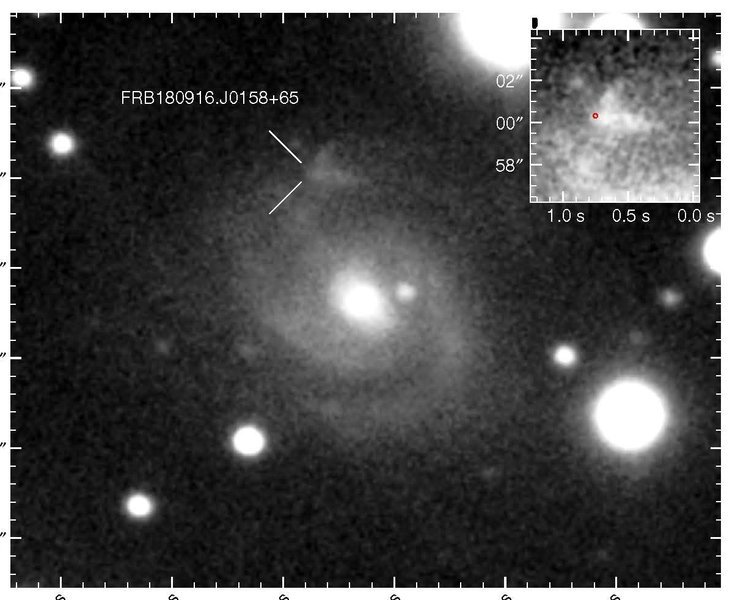 A Repeating Fast Radio Burst from a Spiral Galaxy

Localisation of a new, recurring source of radio flashes deepens the mystery of their origins

The Effelsberg 100-m radio telescope participated in the European VLBI Network (EVN) to observe a repeating Fast Radio Burst (FRB) and helped to pinpoint the FRB to a spiral galaxy similar to our own. Crucial to this work was the sensitivity of the Effelsberg telescope and its flexible pulsar instrument that aided the quick radio localisation. This FRB is the closest to Earth ever localised and was found in a radically different environment to previous studies. The discovery, once again, changes researchers’ assumptions on the origins of these mysterious extragalactic events.
[more]
Page1|2|3|4|5|…|»
/research/fundamental/highlights