Radio astronomy is an ideal tool to provide an insight into fundamental physics that is otherwise not obtainable. While the observed photons are of low energy, they often result from the most energetic particles in the cosmos. They carry information of the most extreme objects in the Universe (e.g. neutron stars) and their properties, namely polarisation and arrival times, reveal unique information about the only two fundamental long-range forces, electromagnetism and gravity. These are investigated along other basic questions in physics and astrophysics, questions about the fundamental properties of matter and the origin and evolution of the cosmos that we observe and live in. 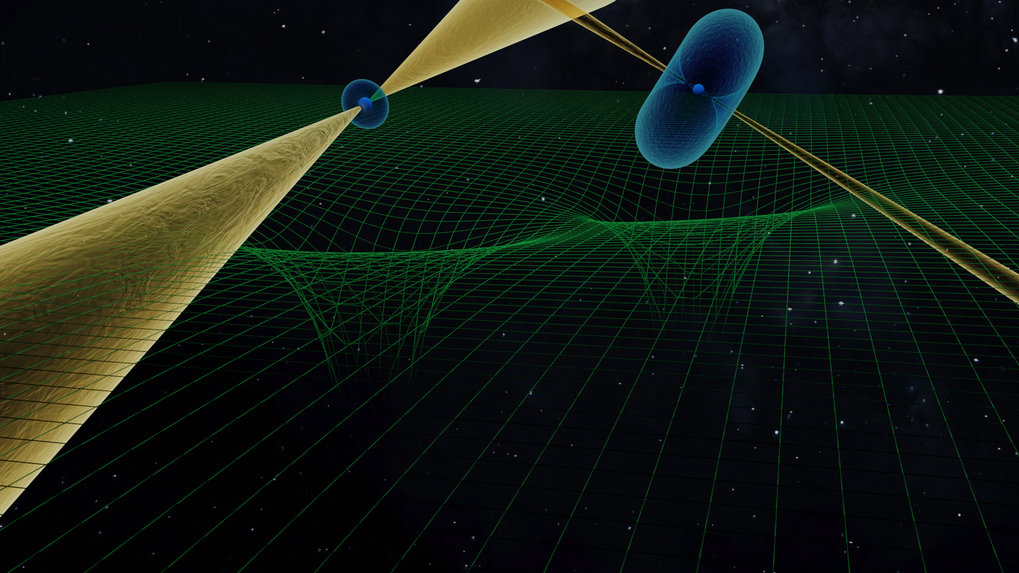 Binary pulsars give us the only high-precision strong-field tests of gravitational theories. Russel Hulse and Joe Taylor earned the Nobel Prize in Physics in 1993 for their discovery of the first binary pulsar, PSR B1913+16. Precise measurements of the orbital motion of this object with the Arecibo radio telescope confirmed the existence of gravitational waves (GWs), a fundamental prediction of general relativity (GR) and many other theories of gravity.

A new binary system consisting of two pulsars, PSR J0737-3039 (A and B, see artistic depiction to the left) has recently provided a total of five tests of general relativity, including the most precise ever made in the strong-field regime (Kramer et al. 2006, Science, 314, 97). The precision of some of these tests keeps increasing fast with time. This will successively rule out some of the currently still valid gravity theories. It would certainly be sensational, if it turns out that general relativity is amongst them. [more]

In addition to neutron stars, we also aim to study the properties of black holes. For this we search, among others, for pulsars with black hole companions. Such systems are very rare, but with our projects to explore the dynamic radio sky we should be able to track them down. Once found, we can use the orbital dynamics to determine the characteristics of black holes. It would be easier if we found a pulsar around the super-massive black hole in the centre of our Milky Way. Here  we can also compare our results from pulsars with the images of black holes, that we are pursuing within the ERC Synergy Project BlackHoleCam as a partner in the Event Horizon Telescope which involves all departments in the institute. [Millimeter and Submillimeter Astronomy and Radioastronomy / VLBI).]

Gravitational waves (GWs) are predicted by General Relativity (GR). Their existence has already been verified with great precision by the observation of several binary pulsar systems (see above). Their recent observation with the terrestrial gravitational wave detectors LIGO I and II has opened a new window on the Universe. For the first time it was possible to study the merger of two black holes. This marks the dawn of gravitational wave astronomy, which promises a leap in our understanding of gravity, cosmology and astrophysical processes involving compact objects.

The principle behind the GW detection using radio pulsars is probing the changes of the distances between the Earth and the pulsars caused by the spacetime distortion created by the passing of GWs over the Earth. The change in distance induces a delay or advance on the arrival times of the pulses. Since the effect is expected to be very small, we use the most rotationally stable pulsars, a class known as millisecond pulsars. The detection requires long-term timing observations and analysis on many pulsar systems scattered across the sky, commonly referred to as a pulsar timing array (PTA). PTAs are sensitive to low-frequency (nanohertz regime) GWs. The main astrophysical source of such GWs is expected to come from the coalescence of binary supermassive  black holes at the centres of galaxies. We search both for a stochastic GW background, formed by the superposition of GWs from multiple sources and for strong signals from single sources located in the nearby Universe. The effect of GWs on the arrival times of pulses from the pulsars would manifest itself as a correlated signal in the arrival times of the pulses.

The European Pulsar Timing Array (EPTA) is a collaboration of European institutes focusing on detecting low-frequency GWs using high-precision timing observations of radio pulsars. The EPTA regularly observes millisecond pulsars using the largest radio telescopes in Europe and develop theoretical tools to search for GWs in the data and interpret the results while at the same time constantly working on improving instrumentation and the precision and quality of the data.

Given the large mass (~ 1.4 solar masses) and small radius (10-16 km) of neutron stars, matter at their centers is one or two orders of magnitude denser than atomic nuclei. The composition and behavior of matter in these conditions is not known. Measurements of the physical characteristics of neutron stars (mass, radius, spin frequency, moment of inertia) can constrain the equation-of-state of super-dense matter.