Whether it is finding a new gravity lab, the discovery of an exotic pulsar that pushes the limits of the equation-of-state, a highly accurately timing millisecond pulsar (MSP) that can be used as part of an array to detect gravitational waves, an unexpected transient signal, or a normal pulsar that will help map the interstellar medium, the discovery of a pulsar inevitably leads to an improvement in our understanding of one or more research areas.

Pulsar searches are therefore an integral part of the department's research strategy. Consequently, the group is involved in nearly all major searches for pulsars, in particular in the only true all-sky survey for pulsars, the High Time Resolution Universe Pulsar Survey (HTRU) using the Effelsberg and the Parkes telescopes. This survey is being complemented by the group's involvement in the first survey using LOFAR, which will uncover the currently hidden local population of weak radio pulsars, the PALFA survey at Arecibo, the search for pulsars in unidentified FERMI point sources and a number of specially designed surveys for particularly interesting areas like the Galactic Centre. [animation of the different pulsar surveys] 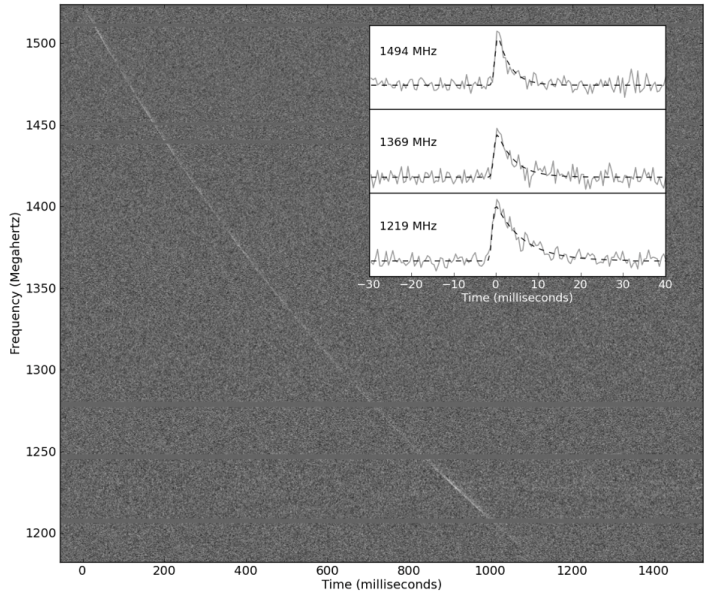 We usually discover the repeating light-house signal of rotating neutron stars. But we are also sensitive to fast radio bursts in general. While most of them are man-made signals caused by some radio interference near the telescope, recent results has pointed to the existence of burst of astrophysical origin at cosmological distance. The processes creating these signals is unclear, but their study was one of the motivations to design the all-sky HTRU survey ongoing at Parkes and Effelsberg for optimal transient detection. The detection of transients does not only offer chance to discover new types of sources, but it will also help us to determine the properties of the intergalactic medium, including its baryon density and its magnetic field.

The "TRAPUM" project at the MeerKAT telescope aims to detect and localise transients and pulsars under the joint leadership of the MPIfR and the University of Manchester in collaboration with colleagues in South Africa and other international partners.