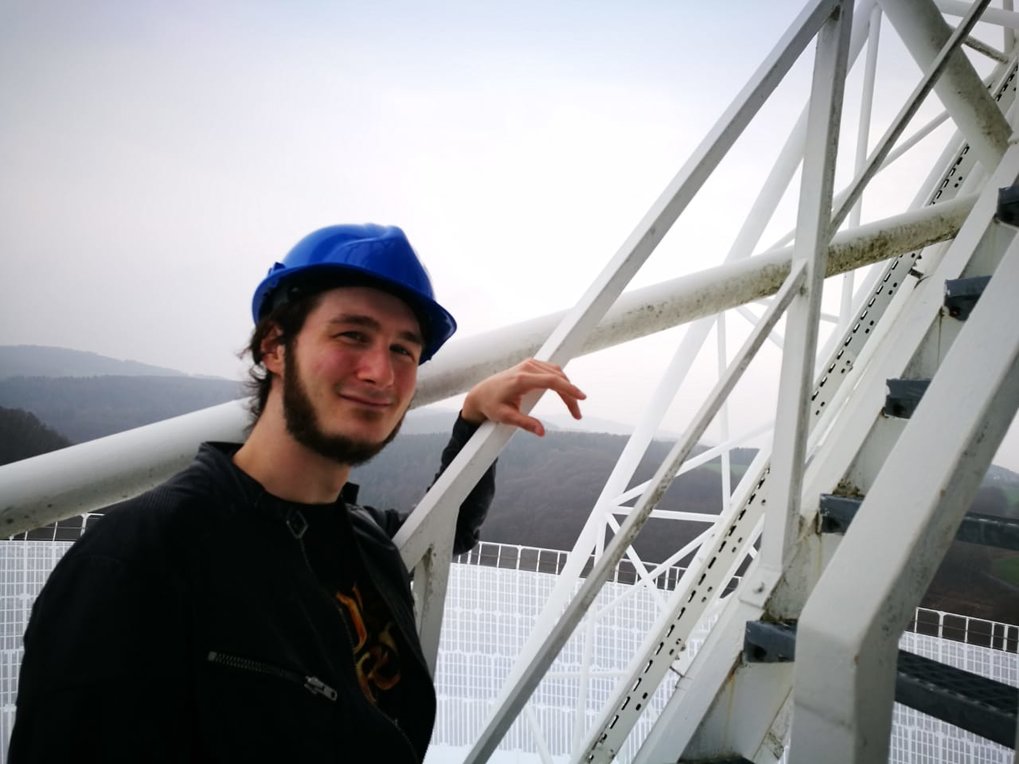 The Project  Supermassive black holes (SMBHs) in the centres of active galactic nuclei (AGN) power collimated relativistic outflows (jets), which are revealed in the form of non-thermal radiation across the whole electromagnetic spectrum. The energy for the formation and acceleration of jets is thought to be either extracted from the accretion disk surrounding the black hole (Blandford-Payne mechanism), or from the rotating magnetosphere of the black hole (Blandford-Znajek mechanism). In either case magnetic fields are thought to play a crucial role in the formation, collimation, and acceleration of these jets. Thus investigating the strength and orientation of magnetic fields in these objects at pc-scales can give us crucial information on the jet physics.
High resolution observations are necessary to constrain the various theoretical models. The highest resolution at radio wavelengths can be achieved with Very Long Baselines Interferometry (VLBI), which utilizes telescopes on several continents by recording data on many telescopes and correlating the signals afterwards. Thus a telescope as large as the earth can be synthesized with milliarcsecond resolution. The addition of a telescope in space can increase the achieved resolution even further, which is realised within the RadioAstron project, utilizing a 10-m dish on the Spekt-R spacecraft. The full-polarization capabilities of the spacecraft, in conjunction with many ground stations, allow us to determine magnetic field configurations on scales of a few hundred to even tens of microarcseconds.

In my PhD project I mainly reduce and analyse data of the strong blazar 3C 345. I create total intensity and polarization maps from VLBI observations with RadioAstron, from which crucial parameters such as the source brightness temperature, magnetic field strength and orientation can be determined. Faraday rotation gradients across different resolution-elements in the jet indicate the existence of a helical magnetic field, favouring the scenario where the jet is launched from the rotating accretion disc surrounding the SMBH. I will also examine the spectral index variations in the source to allow for a determination of synchrotron-self-absorbed and optically thin regions within the jet. Furthermore, I investigate the frequency-depended position shift of the compact central feature of the pc-scale jet (core-shift) to determine the magnetic field. This is also tried on a sample of AGNs observed with VLBI at multiple frequencies simultaneously with the Korean VLBI network (KVN) and the Yebes 40-m telescope in Spain, to allow for a correct alignment of the maps at different frequencies to infer proper core-shifts.
Later within my project I will supplement the observations with jet MHD simulations for comparison with and correct interpretation of the data.

About me  I was born and raised near Bonn and developed an interest for astronomy at an early age. After school I decided to study physics at the university of Bonn, resulting in a Bachelors degree. During my studies a special interest in Radio Astronomy manifested. I wrote my Bachelor thesis on "Submm observations of lensed Quasar Host Galaxies". Following that I did my master studies in astrophysics, also in Bonn, and completed my master degree with a thesis on "Comparison of CO line and dust continuum emission as tracers of molecular gas masses through cosmic time". I finally applied to the IMPRS for Astronomy and Astrophysics of Bonn/Cologne and am working since then in the VLBI group at the MPIfR led by Prof. Zensus.