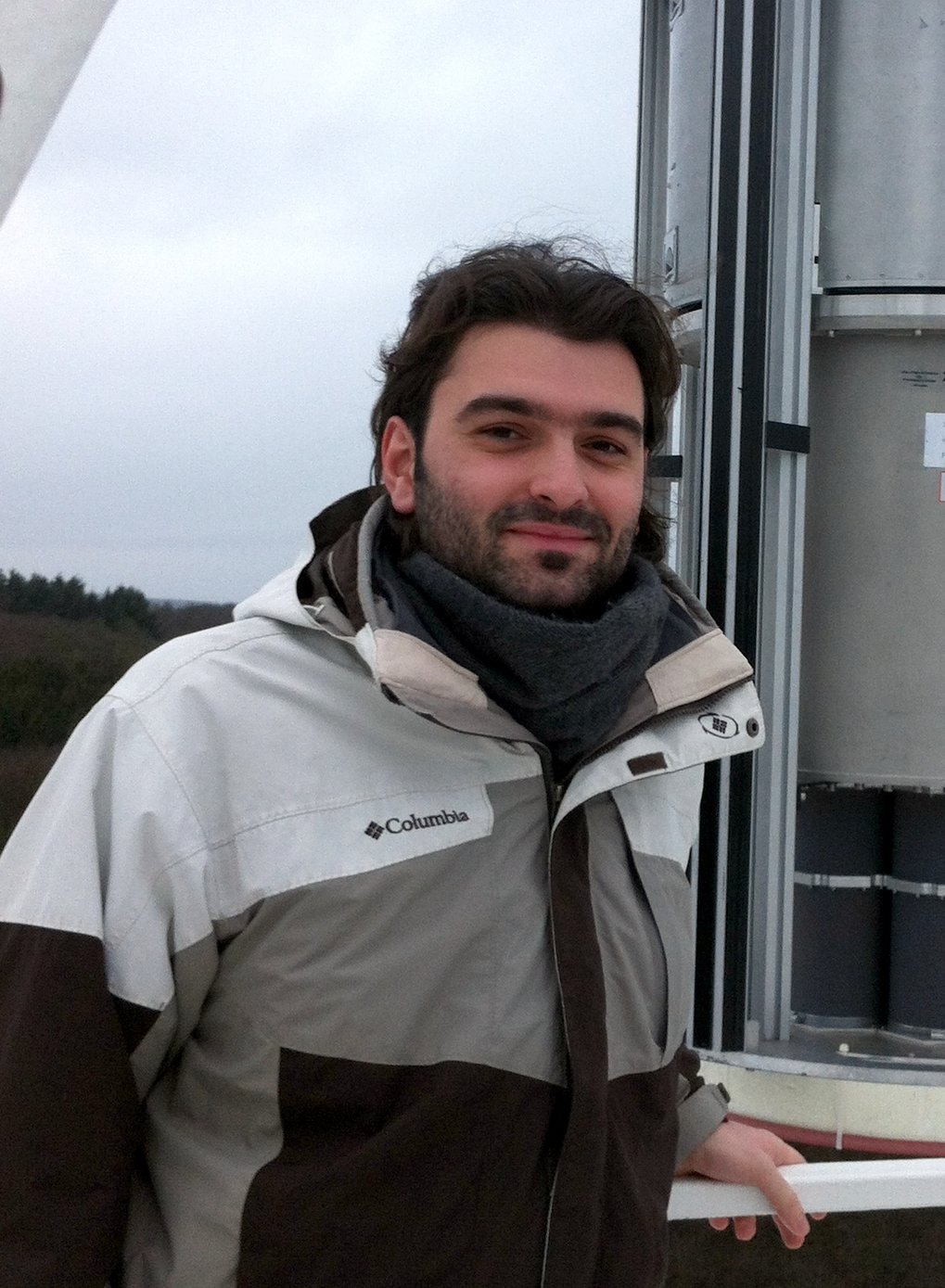 Blazars are accretion-powered systems representing the most extreme flavor of active galactic nuclei (AGN). My research focuses on the study of blazar PKS 1502+106 during a prominent broadband outburst using ultra-high resolution imaging and a broadband single-dish study. The former is accomplished through Very Long Baseline Interferometry (VLBI) at short millimeter (mm) wavelengths, while the latter uses densely-sampled radio light curves at a wide frequency range. The same combination allows the detailed study of the galaxy 1H 0323+342. This is a prominent member of the Narrow-Line Seyfert 1 (NLS1) class of AGN, recently discovered to emit γ rays.

The phenomenology and physical characteristics of  the jet of PKS 1502+106 can be unveiled through cm- to mm-VLBI studies. My data set features Global Millimeter VLBI Array (GMVA) observations at 7 mm (43 GHz) and 3 mm (86 GHz) along with complementary observations at 2 cm (15 GHz) from the MOJAVE program. The analysis is also complemented by F-GAMMA program data at frequencies matching the VLBI monitoring and by the Fermi/LAT γ-ray light curve. From the rich data set its kinematical and spectral characteristics are deduced, allowing the inference of physical parameters of the ultra-relativistic jet of PKS 1502+106 such as the Doppler factor, the viewing angle and more. Ultimately the γ-ray production site can be spatially constrained. 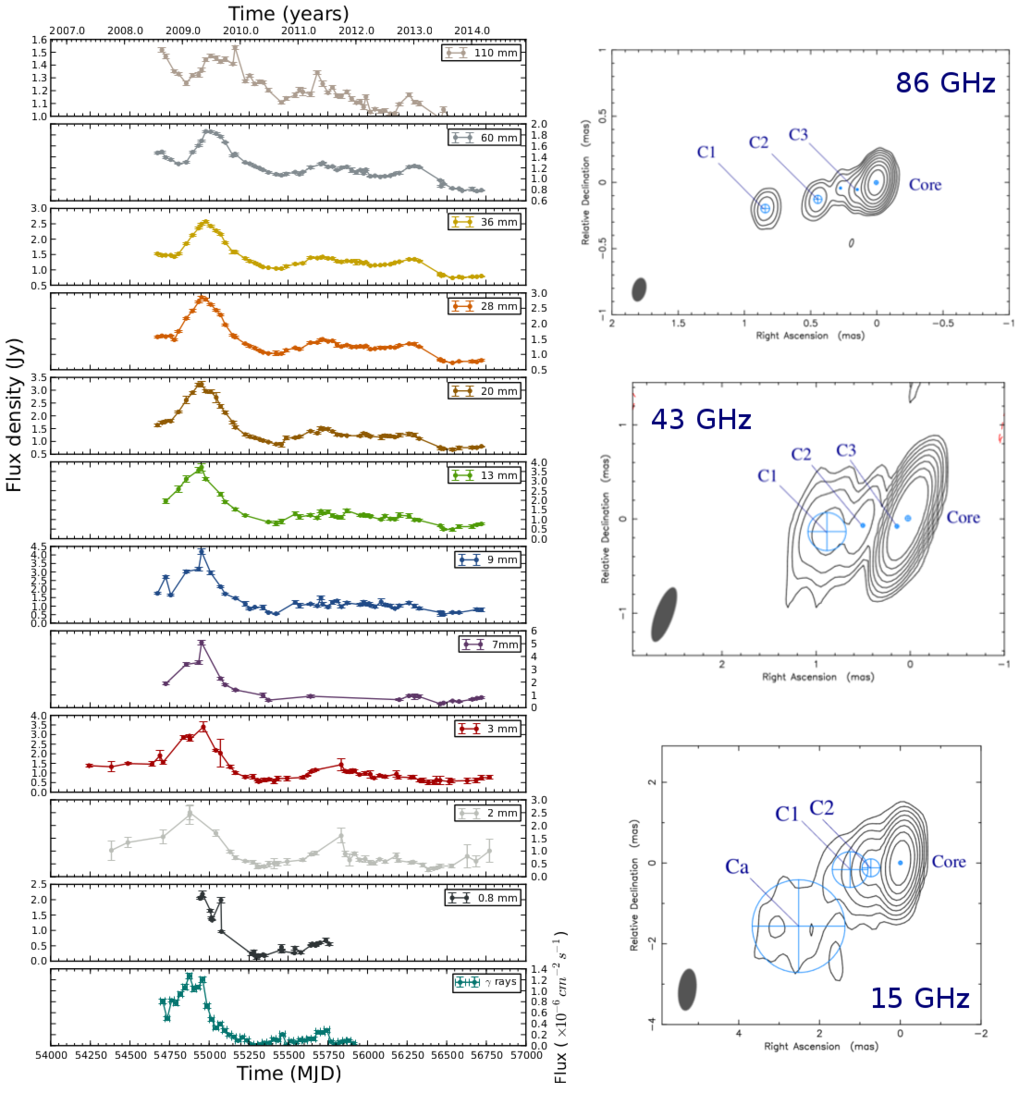 The outburst of PKS 1502+106 is also followed through the dense, single-dish, F-GAMMA data set between 2.64–345 GHz. By employing three different time series analysis techniques, relevant light curve parameters, such as the flare amplitude, flare time scales, and time delays of maxima are extracted. Those are compared with the expectations of  the shock-in-jet scenario with which a good agreement is found. From the frequency-dependent time lags observed, (i) a tomography of the source, in terms of nuclear opacity, is obtained and (ii) magnetic field strengths are calculated. In combination with the VLBI findings, the MeV/GeV emitting region is localized at the edge or slightly further from the bulk of the broad-line region (BLR) material of PKS 1502+106. This has important consequences on the origin of photons available for inverse Compton up-scattering.

A side project in collaboration with the F-GAMMA team, people from the MPIfR and from Uni. Wuerzburg, has to do with the study of the radio properties of the latest-discovered MeV/GeV AGN emitters; the narrow-line Seyfert 1 family of galaxies.

About me  I was born in the sunny Thessaloniki, Greece. After graduating from the 9th High School of the city I enrolled at the Aristotle University of Thessaloniki, from where I obtained my Diploma in Physics in 2011. My Diploma thesis was about optical astronomy techniques and focused on a new survey for variable stars. In February 2012 I started my PhD as an IMPRS fellow here in the MPIfR within the VLBI group, which was completed on May 6 2015.  After that, I am holding a postdoctoral fellow at the IMPRS group.