A team of radio astronomers led by Nicholas MacDonald, affiliated to the MPI für Radioastronomie and Boston University, has developed the ring of fire model to explain the origin of γ-ray flares in blazars without correspondence in the radio band.  A ring of shocked plasma along the relativistic outflows in blazars can explain the missing emission in the radio observed in a sample of blazars, the most prominent sources in the non-thermal sky (that is, with radiation of non-thermal origin, both in the radio and the γ bands.   Further details of this work, connecting theory and observations, can be obtained in the original publication in the Astrophysical Journal here.

Blazar 3C 273 probed at the highest resolution with space-VLBI

The RadioAstron space mission continues providing sharp images from the most compact objects in the radio sky. Observations led by Gabriele Bruni at the MPI für Radioastronomie of the radio source 3C 273 in the framework of the Polarisation Key Science Projet of RadioAstron are reported in the present issue of the journal Astronomy & Astrophysics.  The results reveal that the nuclear brightness temperature of thte source is hundred times larger than the exceptional value detected in earlier observations in 2013.  New features are also present in the jet.  Further details can be found at the original publication here.

Measuring the masses of young stars, a puzzle for stellar models

An international team of astronomers led by Bonn researcher Rebecca Azulay reports in the present issue of Astronomy and Astrophysics results from astrometric measurements of the pre-main-sequence stars HD 160934 A and C, EK Dra, LO Peg, and PW And.  The results present observational evidence that the stellar evolutionary models underpredict the mass of those stars by 10%-40%, challenging the present approach for modeling.  The authors suggest that the magnetic activity of stellar coronae triggers gyrosynchrotron emission from non-thermal, accelerated electrons.  Detailed information can be found in the original publication here.

Radio loud Active Galactic Nuclei (AGN) with the jet not pointing directly to the observer are a new class of GeV emitters revealed by the Fermi-LAT space telescope.  A team of astronomers led by the MPIfR PhD researcher Roberto Angioni publishes in the present issue of Astroparticle Physics a study of the impact of the Cherenkov Telescope Array (CTA) on the misaligned AGN class and proposes observational strategies to optimise their detection.  More information, directly in the original publication here.

Cutting-edge observations aim to directly image the immediate environment of a black hole on the first two weeks of April 2017 by two arrays of telescopes including the highly-sensitive Atacama Large Millimetre Array.  The „Event Horizon Telescope”(EHT) is an international project which will allow to test Einstein’s Theory of General Relativity in an extreme regime. The Global Millimetre VLBI Array, managed by the Max Planck Institute for Radio Astronomy, will complement these observations. A number of European research institutes participate in the observations, to be partially post-processed at the correlator center in Bonn.

The GMVA network will perform observations with 14 antennas from March 31 to April 4, focusing on several active galaxies, among those 3 targets will be observed jointly with the ALMA telescope in Chile.  The 100-m radio telescope in Effelsberg will participate in the GMVA observations.  For the EHT observations, see the MPIfR and the MPG press releases here and here, respectively.

The analysis of the GMVA observations including phased ALMA will be completely postprocessed at the MPIfR correlator in Bonn. 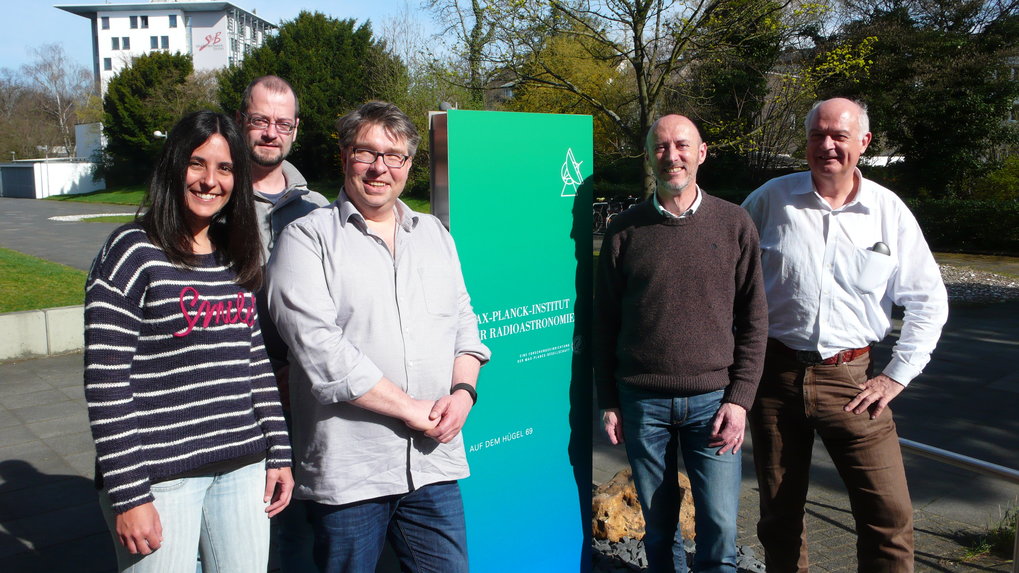 Can millimetre-wavelength interferometry observations challenge the existence of black holes?

Andrei Lobanov, staff scientist at the MPIfR discuss in the present issue of Nature Astronomy the existence of black holes and an observational test for those, based on the study of the magnetic fields in the central regions of super massive objects.   The Event Horizon Telescope has the capability to observe the polarised emission in the neighbourhood of the putative event horizon, and magnetic field values beyond 104 Gauss may challenge the standard interpretation of the physics in these objects.  More information in the original publication here.

MPIfR astronomers led by J. Hodgson have identified the location of the high-energy emission in the BL Lac object OJ 287, known by its periodic flux density outbursts and its wobbling parsec-scale jet.  These findings are based in the comparison of very detailed images obtained with the Global Millimetre VLBI Array with the γ-ray light curves from the Fermi space telescope.  The international team could estimate the strength of the magnetic field, larger than 1.6 Gauss in the central region and below 0.4 Gauss in the relativistic stream.  This study has been published in the present issue of the Astronomy & Astrophysics journal, see here.